Space shooter fans rejoice, Super Hydorah is here in nostalgic old school glory.  The talented team at Abylight Studios has created a retro infused horizontal scroll shooter for the Xbox One.  It’s an experience that takes players on a trip back in time to the 80’s and 90’s arcade era.  It heavily favors Gradius and other classics from this overlooked genre, but at the same time has its own style, sound and unique level designs. 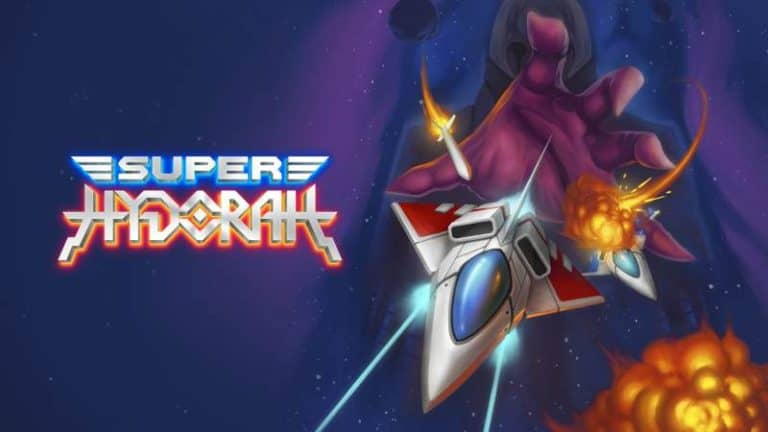 Gamers have to stop an impending invasion and the enemies are vast, powerful and relentless in their pursuit to rule over the Omios star.  You’ll start the game with the bare essentials in options, which sets the starting difficulty quite high.  It’s still however right in line with the retro classics that Super Hydorah is modeled after.  Players have 21 intense levels ahead of them.  You’ll have to memorize the enemies and their attacks, as well as take advantage of every power-up that comes along your way (most notably the shield).  Other capsules contain advantageous items such as increasing the rate of fire, boosting your ship’s speed and improvements to your cannon.  As you advance, you’ll be able to select which path and level to select.  Since different paths can be taken to the end, there are also multiple endings, which is always welcome.

Players are awarded new options in how to equip their ships as you work your way past each stage.  These options include primary and secondary weapons, plus a variety of bombs to choose from once unlocked.  A dizzying array of bullets, lasers and projectiles are hurled at your ship, giving you nothing more than a mere split second to react, evade and attack.  The controls are excellent and wonderfully responsive.  Every death that occurred was a direct result of either not knowing the level or being unfamiliar with the attack patterns from the 70 plus enemies you’ll encounter.  This includes aliens, asteroids, space ships, robots and even environmental dangers. 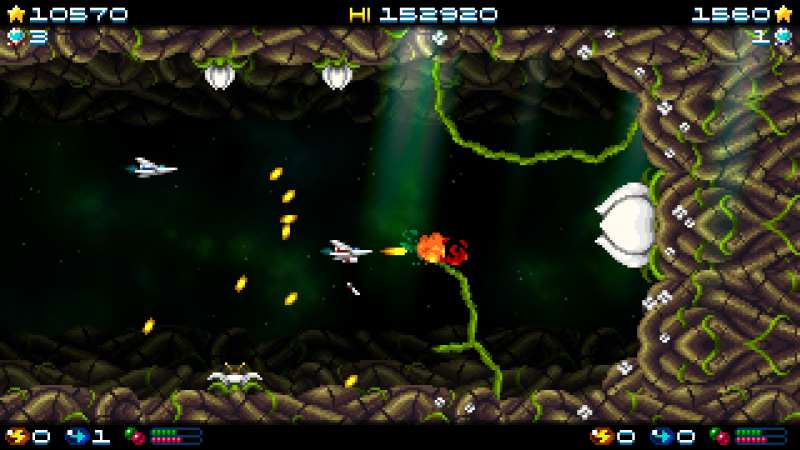 The environments themselves pose threats as well, which mean you have some serious maneuvering to do through each level; not to mention the 30 punishing bosses you’ll have to defeat.  Expect to die often and use lots of continues.  This game is no pushover and it demands your full attention at all times.  That challenge is just one part of what makes it so thrilling to play.  I also love the art direction and old school look that Abylight Studios has embraced for Super Hydorah and the CRT effect that can be enabled really brings that classic arcade experience back to life.  The color palette is vibrant and each level bursts with detail.  It’s a throwback to the classic arcade space shooters not only visually, but in sound as well.  Abylight Studios has created an outstanding soundtrack for the game with over 49 retro tracks in place. 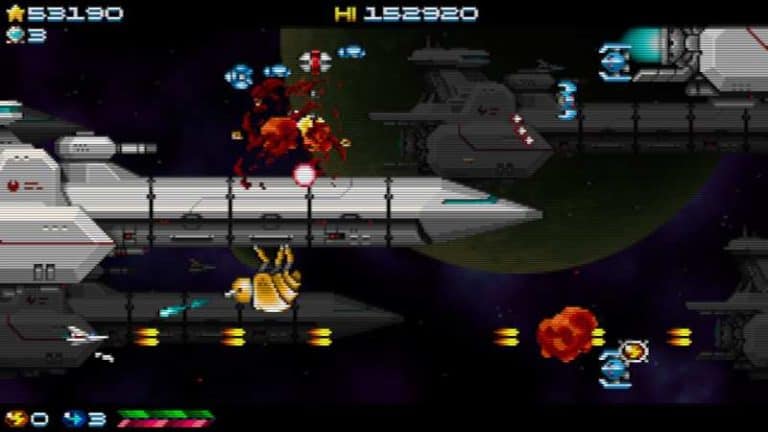 Super Hydorah is a nonlinear horizontal shoot’ em up designed to offer a challenging and memorable experience, sublimating the wisdom and richness of traditional shmup classics. The game has direct action, nostalgic art and a wide variety of unique spatial content and situations. It is hours of intense fun, alone or with your friends, to face the menace of the Meroptians aboard the Delta Lance.