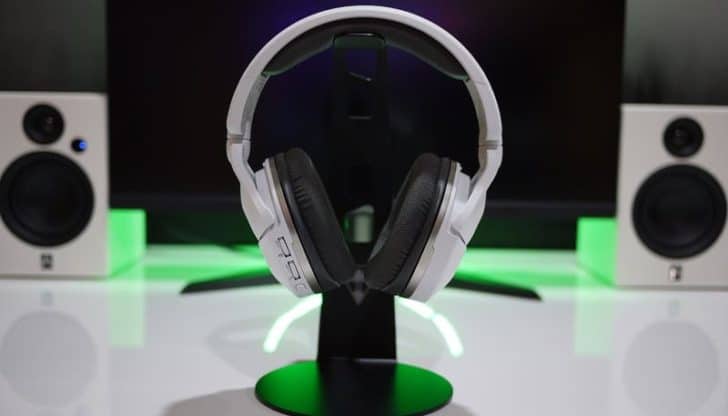 Turtle Beach is back with Gen 2 of their best-selling Xbox One headset, the wireless Stealth 600.  This latest model is also compatible with the upcoming Series X.  Let’s see what improvements have been made and test out some games!

The Stealth 600 series from Turtle Beach is well known for being one of the most popular entry-level wireless gaming headsets for the Xbox One and PS4.  Today we are reviewing their newest Gen 2 version for the Xbox One.  Simply off first impressions and the feel of the headset’s components, you can tell this is quite the upgrade.  I absolutely love the white, grey and silver color scheme.  It’s immediately apparent the fit and finish from top to bottom is more upscale this time around.  The headband has been reinforced and it now features a leather wrapped memory foam insert, that improves overall comfort and does a great job fighting fatigue during long play sessions.

“The earbuds are noticeably more soft and plush in feeling, providing a nice comfortable seal; immersing gamers from the sound produced by the powerful 50mm drivers.” 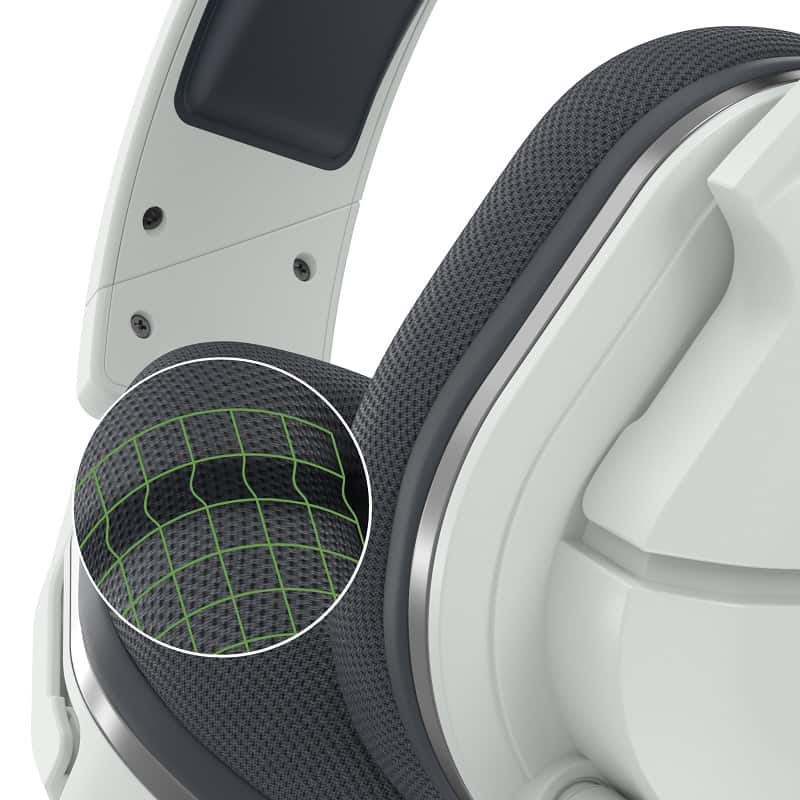 There are 3 physical buttons, including Sync, Power and Audio Presets (Signature Sounds, Bass Boost, Bass + Treble and Vocal Boost).  Above these, there are two volume dials, one for gaming audio and the other for chat.  This makes it incredibly easy to either boost the game’s sound or chat, without looking or second guessing what you are actually pressing. 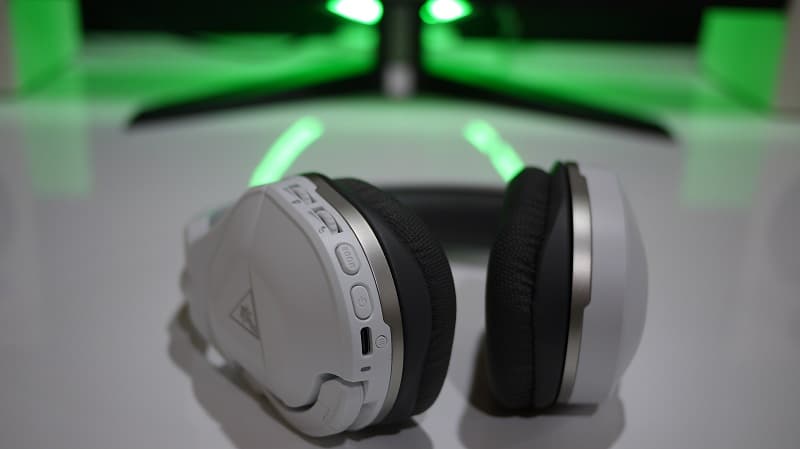 Getting up and running could not be easier.  Press in the sync button on your Xbox and headset, that’s it.  There are no adapters, dongles or cables to speak of.  While it does come with a USB-C cable, that’s strictly for charging and connecting to the Turtle Beach app for updates.  A full charge should net you around 15 hours of playtime. 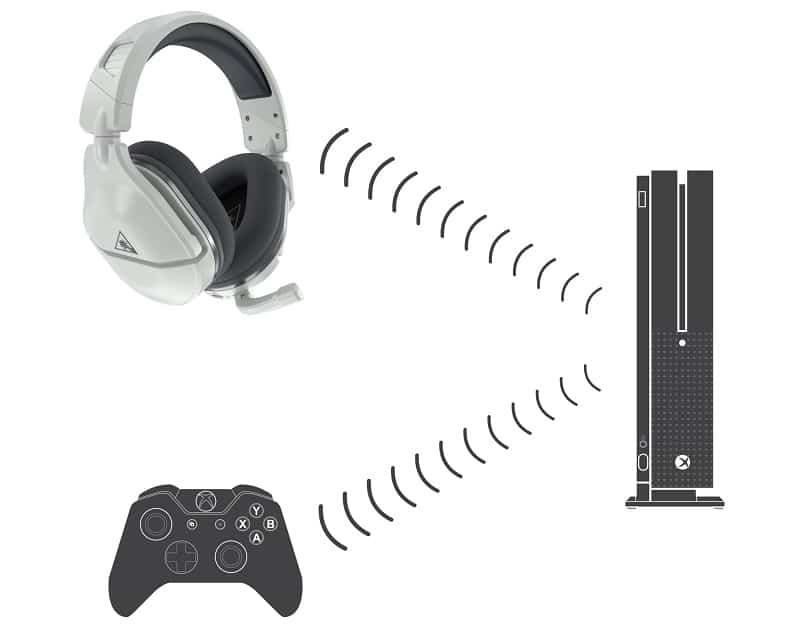 Instead of flipping up on the side of the ear cup, the mic now folds directly into the headset.  This makes it near seamless and also activates the mute option when tucked away.  The patented Turtle Beach SuperHuman Hearing is in place for gamers that enjoy first person shooters (accurately pinpointing enemy footsteps and gunfire direction); as is their excellent ProSpecs design to make this model comfortable for those wearing glasses. 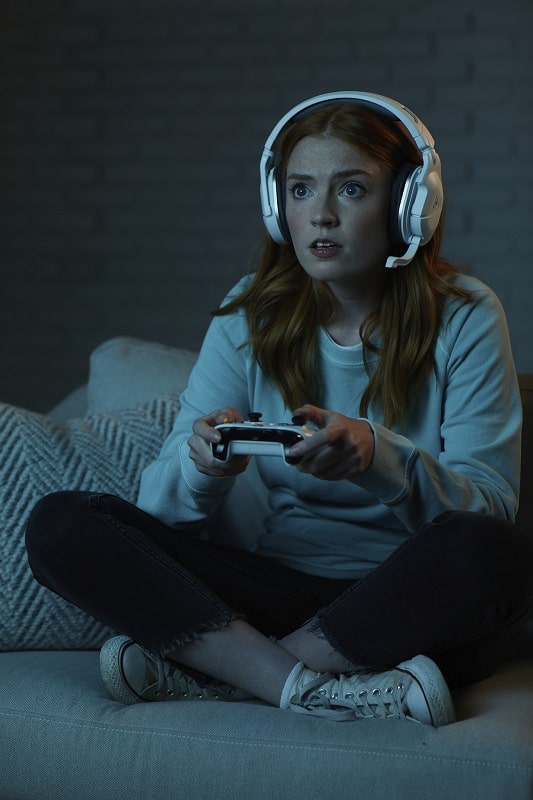 Games: Halo 5, Ori and the Will of the Wisps, Resident Evil 3, Call of Duty: Modern Warfare, Star Wars Jedi: Fallen Order and Streets of Rage 4

To kick things off, I played some of my favorite single player games of the year.  The light saber battles and action sequences in Star Wars Jedi: Fallen Order were extremely full of detail and surprising depth at this price range.  RE3 provided some chilling moments in Raccoon city, especially when hearing the sound of Nemesis crashing through walls and growling the word “STARS”.  Ori and the Will of the Wisps was a delight and the soundtrack from each cinematic and boss battle really soared to life through the headset.  Streets of Rage 4 could fall into both categories here (SP and MP), but the results were the same either way.  Justice was served to the game’s amazing OST and arcade gameplay; blasting wonderful tunes and action via the Stealth 600’s drivers.

I maxed out the volume on quite a few occasions and there was absolutely zero distortion.  For gaming, it delivered more than enough sound, providing intense clarity and range across the audio spectrum.  When listening purely to music tracks, I’d honestly would have liked a tad more power on the top end to push it further, but I also admittedly like my music really LOUD.  The bass, midrange and treble are all terrifically balanced across all mediums.  The sound design and engineering in place are truly impressive within this given budget. 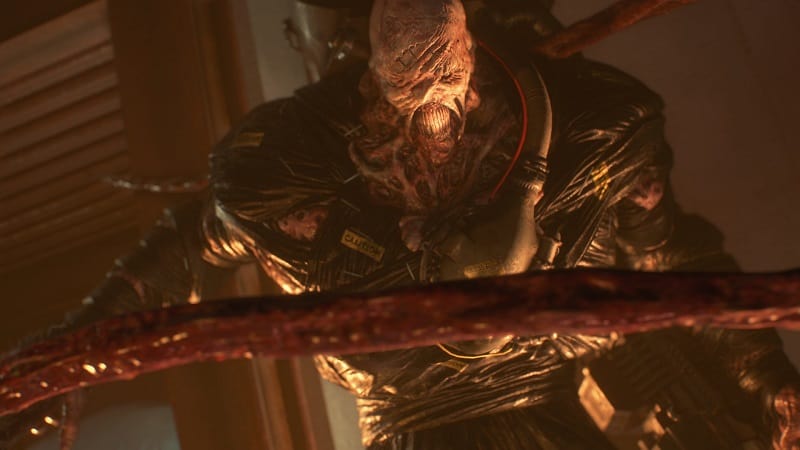 Next up in line was multiplayer games.  This is where the Turtle Beach “SuperHuman Hearing” really pays off.  The online matches in Halo 5 and Modern Warfare were very impressive.  Dialing in enemy position from either their movement or gunfire was easy to do while wearing the Stealth 600.  This is no gimmick, as the tech works well and it only takes a few Team Deathmatches to confirm.  Each rifle and pistol sounded accurate and crisp in delivery.  Frag grenades and explosions on each map resulted in punchy, responsive bass.  Again, the volume could be buried and the 50mm drivers refused to distort or buckle under the pressure. 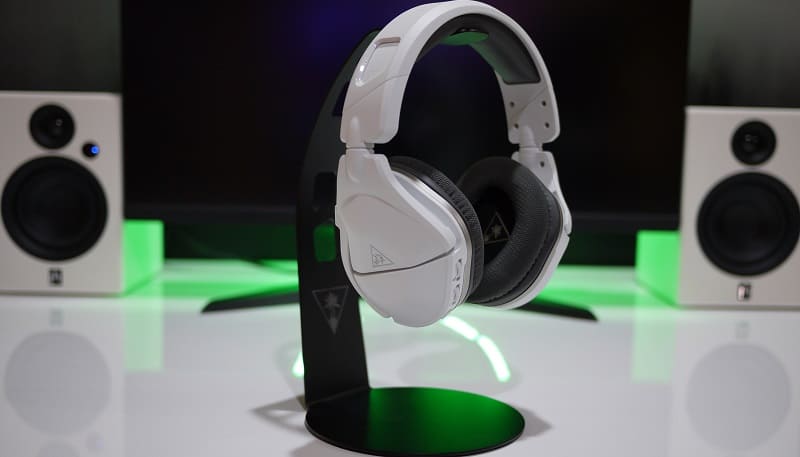 The Stealth 600 Gen 2 Wireless Gaming Headset from Turtle Beach is a wonderful evolution from the first model in this series.  Practically everything has been revamped here with better materials, aesthetics, design and superior performance.  This is currently the best option on the market for those looking to go wireless under $100 on the Xbox One or PS4 (plus it’s next gen compatible).  You’ll simply love the simplicity, build quality, comfort and strong audio performance provided here.