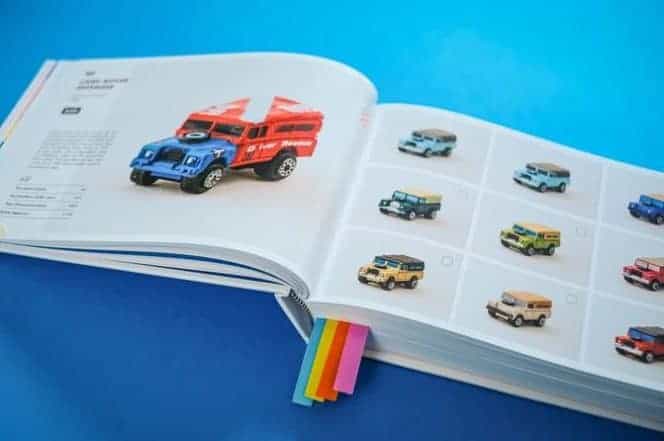 Bitmap Books is back at it again, this time documenting the story of Micro Machines.  They set the market on fire upon release.  Their appeal was so immense in fact, that only the Nintendo NES and Barbie figures outsold them.  Let’s take a look at this very special time capsule that covers all the amazing collections of these highly detailed miniaturized models. 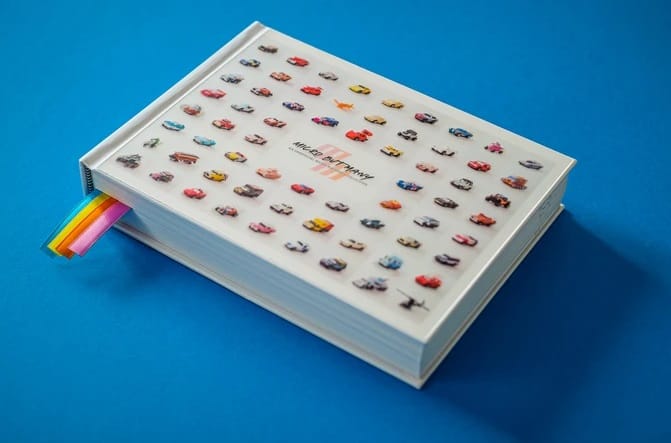 It is always an exciting experience opening up a package from Bitmap Books and this is no exception.  I was one of many that grew up collecting these and imagining myself driving each and every one after a highly anticipated trip to Toys “R” Us or K·B Toys.  There was something special about this product line and it no doubt helped spark my love for the Motorsport scene that is still one of my biggest hobbies to date.

Upon opening the package, the lenticular animated front fascia will likely be the first thing that grabs your attention.  Over 60 Micro Machines change in color or position on front cover depending on the angle you view it at.  This particular hardback book is presented in a longer landscape based design, rather than the typical portrait sized dimensions.  Inside you’ll find 400 gorgeous pages in lithographic print with sewn binding and four colored bookmark ribbons.  Another neat bonus is the Logo sticker and handy foiled bookmark highlighting the Pontiac Stinger Micro Machine model from 1993 (with specs on Top Speed, Acceleration, Production Year and Scale which was 1:125). 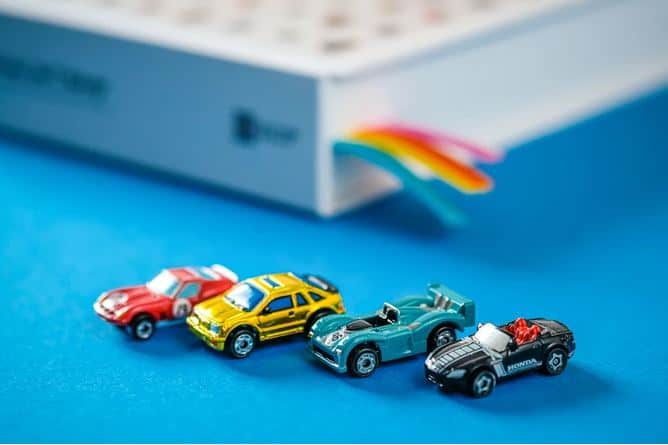 The Foreword for this release was provided by no other than the Micro Machines Man, John Moschitta Jr.  On top of talking incredibly fast (we are talking Guinness world record holder here), John was the star in over 100 commercials that promoted this brand to kids on televisions all across the country.

He would always end with, “Remember, if it doesn’t say Micro Machines, it’s not the real thing!”

John recalled how passionate the designers were behind each car, truck, plane, boat and model that was painstakingly created for both kids and the avid collectors who had one time personally owned the real version of these brilliant mini replicas.  Bitmap Books has worked feverishly to include over 1,000 photographs of the incredible collection that Micro Machines amassed over the years.  Each image showcases insane detail, allowing you to really appreciate the tremendous effort, skill, design and love that went into every machine manufactured. 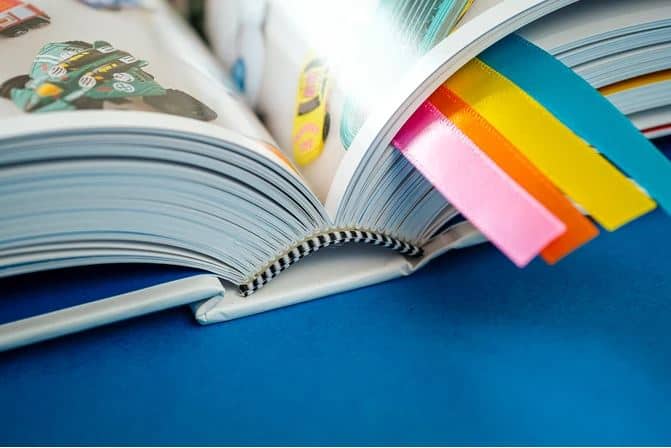 How it All Started

With inspiration from How Wheels and Matchbox cars, Clem Hedeen and his wife Jo set out on a goal to produce something on the market that has never been seen before.  They had envisioned miniaturized cars that would feature greater detail and style than the leading toy competitors; half the size, twice the wow factor!  They owned Fun City USA and began mocking up what they would eventually take to the New York Toy Fair.  They presented their idea to Galoob. This initial run consisted of 24 cars that were complete with factory packaging.  Galoob was sold and in quick order began mass production of the very first Micro Machines in 1987. 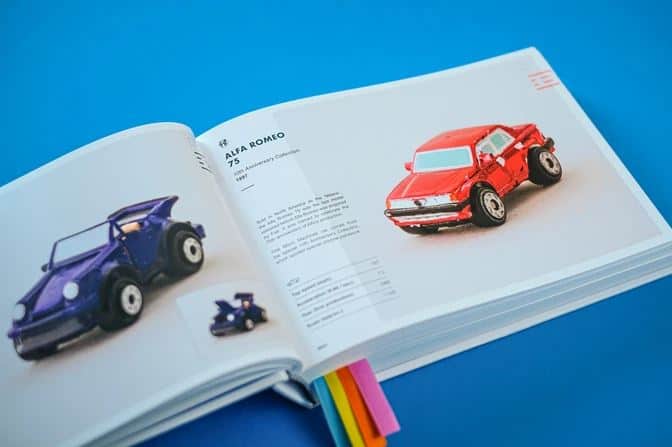 With high energy commercials, thanks to fast talking John Moschitta Jr. and unique collections where you could get 5 rides for the price of one Hot Wheels car, this new brand skyrocketed with sales.  By 1989, over 302 million Micro Machines were sold!  This was just the beginning, as many changes were to come to both design and leadership.  The first years of production used one die-cast metal chassis for all models, limiting their potential for truly unique designs, regardless of how much detail their designers put into them.  This was rectified in 1993, when Tony Miller took over as VP of Design, implementing three more chassis platforms to accommodate a wider range of styles and looks. 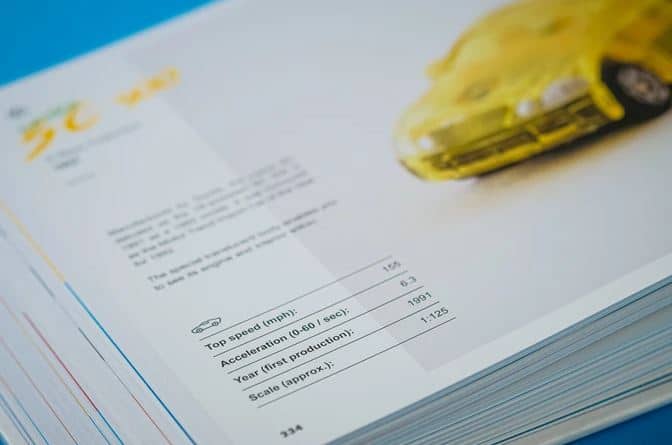 Even amidst this soaring success initially, Galoob had to weather some serious financial storms in the ’90s.  Some of their other toy lines weren’t doing as well and manufacturing problems almost led them to bankruptcy.  Things began to turn around though, as they pushed through the difficult times and people took notice; notably ex-employees from Hot Wheels and Mattel that actually jumped ship to push the Micro Machine brand.  Within the book,  you’ll read there was a specific team (The Core Four), who truly believed in what they were doing and demanded success from not only themselves, but their entire company.  They knew how special these little machines were and the following they had acquired in the toy industry…there truly was nothing like them and never would be again.  As they continued to grow, they would also branch out with special licensed collections themed from the likes of Star Trek and Star Wars.  I was devastated to hear that many other huge collections reached the prototype stages, but sadly never made production.  These never to be seen collections were from Godzilla, Blade Runner, Alien, Predator and Terminator.

To further grow the brand, Russ Masson invented transforming playsets.  This allowed you to race your collection around a colorful city and when not in use, it folded up into a case for portability.  What really sent sales into the stratosphere, was the continued efforts in delivering amazing replicas of cars from the ’90s.  They saw sales go from $22 million to $100 million by 1996.  Micro Machines had officially become an American icon at this point, with notable scenes in the movie “Home Alone” and getting licensed by George Lucas for a Star Wars line.  Rumors have it, that this is initially a big part of what led him to start filming Star Wars: Episode One. 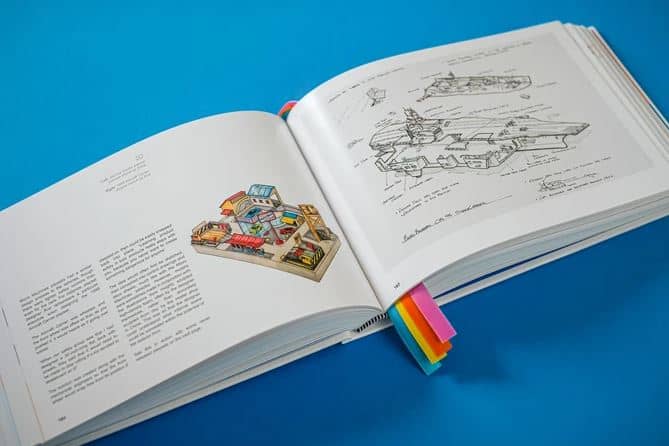 The next big change took place when Hasbro acquired Galoob.  The core team slowly but surely left, leaving the brand’s future in question.  The book notes how Hasbro actually took loads of factory samples and supplies to an undisclosed location and literally ran over them with a steam roller.  A crushing blow to those that adored this product line and what was destroyed that day.  All was not lost though.  Knowing this tragedy was soon to come, several were stashed and saved from extinction and is the sole reason they were able to be featured in this special book.  The much smaller team mostly worked on Star Wars specific collections moving forward.  The excitement behind the brand was no longer there from the manufacturer and the San Francisco Micro Machines office was eventually closed for good.  In Europe, production still continued for a short time thanks to their love for the brand.  The same fate was to come for them as well though, as inferior parts and designs were being implemented into the product line, which in time flat lined consumer interest and sales.  Now these little machines are highly sought after and collected by many, letting this iconic product line live on after being discontinued.  Thanks to Bitmap Books, you’ll be able to see how truly incredible this collection became over the 20 plus years of production.

How They Were Made 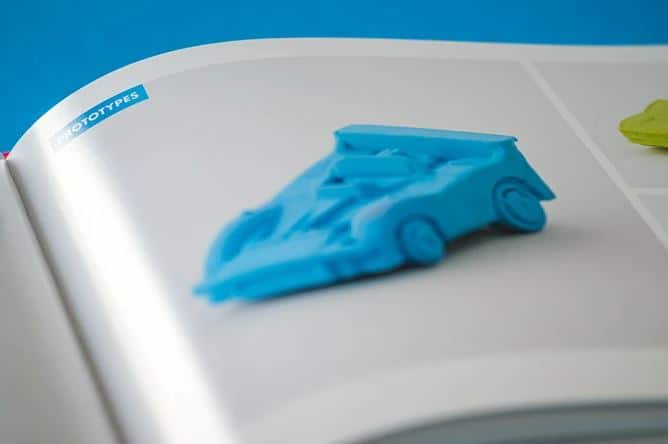 This part of the book is one of my favorites.  It goes deep into the process of how they chose which models were produced.  It had to be brought up with sketches and slides and reasoning for each pick.  A debate would follow and eventually wrap up with a final vote if it would get the official green light from “The Core Four”.  If passed, the next phase would be intricate drawings on drafting tables to nail down the look they wanted.  Actual prototypes followed with models sculpted by hand from clay or plastic; but the scale for these were 3:1 or 5:1 to make it easier to mimic all the designs and details in place for the final piece.

Painting schemes were up next, where they experimented with different looks and patterns.  Not all prototypes made it to production, but the ones that did were handed off after this stage to a third party factory in China for the tooling and injection processes.  Workers then used a stencil spraying method for putting down the intricate paintwork (the Rad Paint Job Chapter covers their wildest designs).  Fans will really enjoy reading every part of this chapter, as it gives a truly exclusive look into how Micro Machines were made from start to finish. 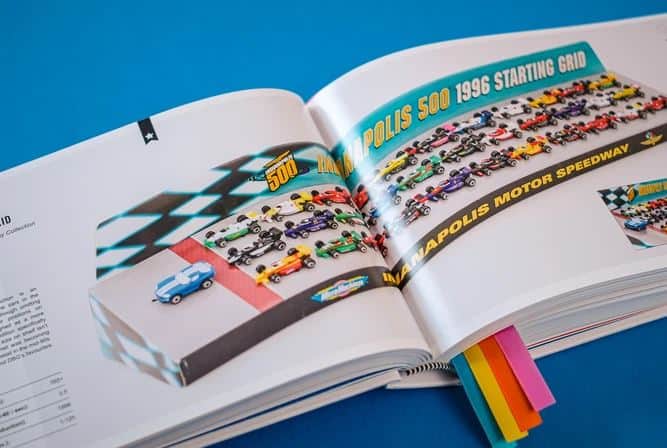 There is a Playsets Chapter that goes into great depth on these ingenious portable creations.  This includes auto centers, navy ships, fire houses, motocross tracks and an Indy race course.  There are detailed sketches and prototype molds, showcasing how they went from an idea on paper to actual production. 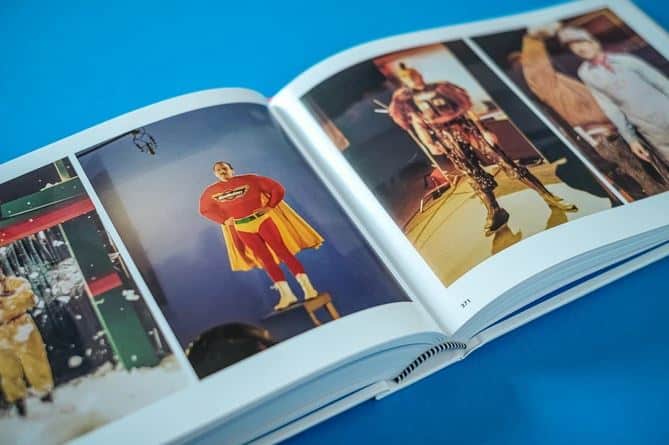 Bitmap Books also covers how Micro Machines were successfully promoted globally.  Here you’ll learn more about the one and only Micro Machine Man John Moschitta Jr. and his wild TV commercials; plus other advertising angles such as appearing on cereal boxes, special edition collections and much more. 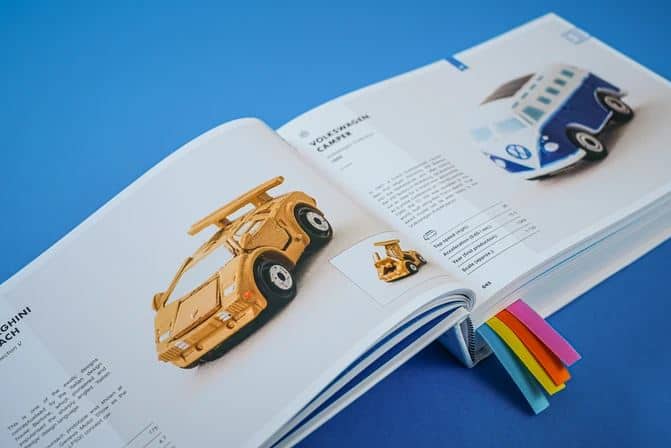 This section of the book covers all the amazing European based cars Micro Machines produced.  This includes classics from Jaguar, BMW, VW, Audi, Renault, Lotus, Ferrari and  more. 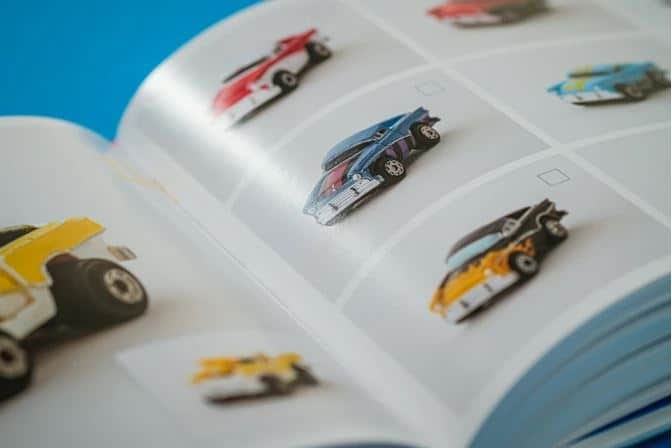 Within this chapter, you’ll get to check out the raddest American cars and vehicles ever made.  It features all time classics from Ford, Chevrolet, Lincoln, Pontiac, Shelby and Cadillac. 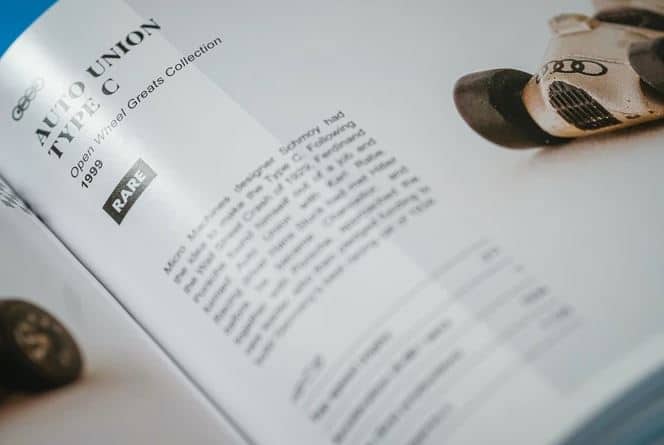 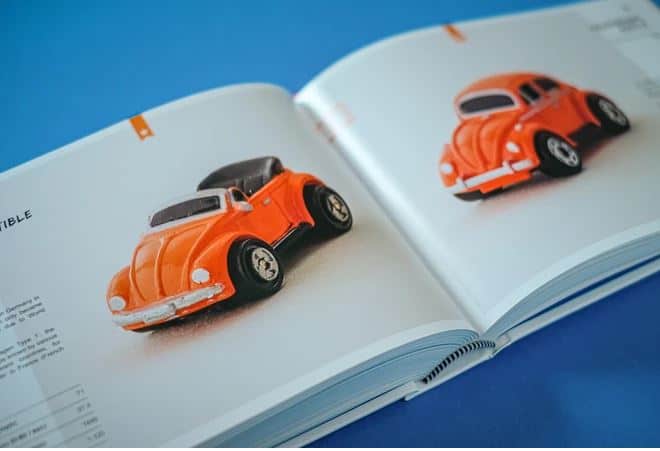 As the name suggests, this chapter showcases two vehicles which share similarities in aspects such as an identical chassis, powerplant or platform.  It’s a fun one to go through, as you’ll discover many models that you never knew shared the same parts in one way or another. 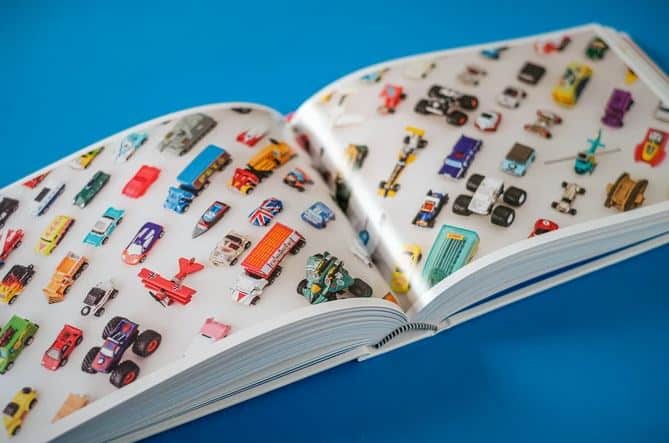 Check out the sleekest jets, locomotives and unique machines that made it into production.  This is a diverse lineup that features tanks, biplanes, speedboats, snowmobiles and much more. 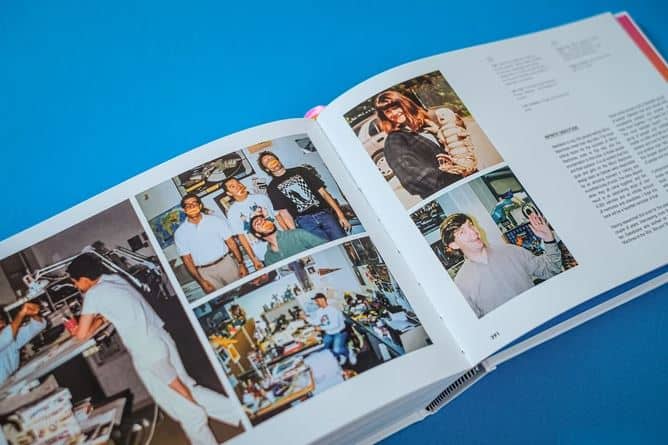 This incredible book wraps up with a in depth look at the people that poured their hearts and souls into the Micro Machines brand.  This of course includes more on “The Core Four” and “The Five Guys” from Galoob.  There are some awesome pictures of the crew, their shop and work spaces where all this magic took place.  You can tell from these shots how much they enjoyed their jobs.  Thanks to their passion and talent, they were able to make Micro Machines one of the most popular toys on the market and to this day they are widely collected and revered. 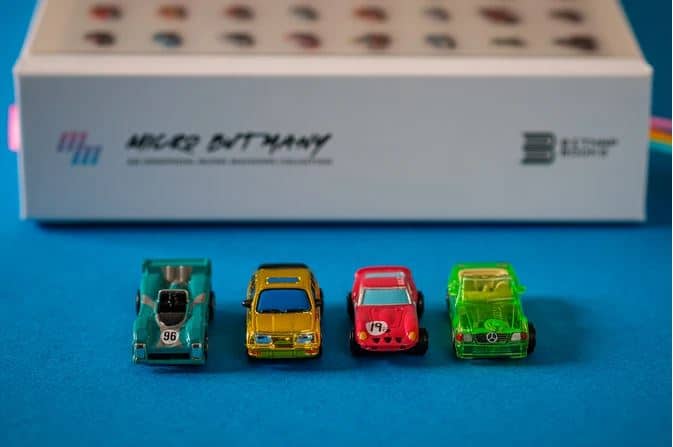 The Micro but Many: an unofficial Micro Machines Collection is another absolute masterpiece from Bitmap Books.  There is so much content, photography and history packed into this highly polished book.  Fans of these incredibly detailed mini replicas will absolutely adore the love and immense work that went into making this possible.  It’s 400 pages of nostalgic joy for collectors and fans of this very special brand that took the world by storm.