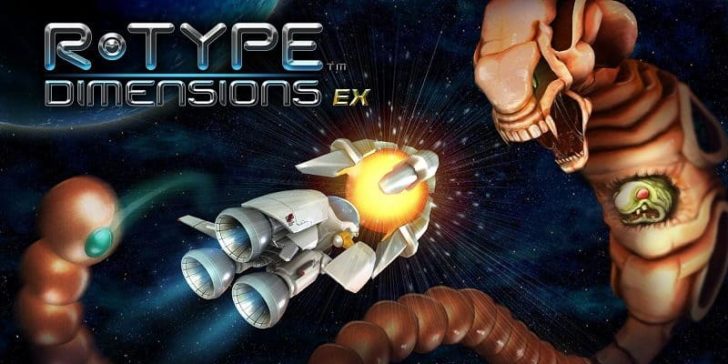 R-Type first hit the scene at the local arcades in July of 1987. Kids and adults dropped quarter after quarter to pilot the R-9 space fighter and blast alien scum to kingdom come. Since being ported to many popular home consoles and later spawning several sequels, we have not seen or heard from this iconic franchise as of late. Luckily R-Type Dimensions EX is here to change that.

One thing that is immediately apparent after playing for even just a bit is that Irem studios have put in a lot of work on this title. Gamers can look forward to playing through all 8 original R-Type levels, plus all 6 original R-Type II levels in this remaster.

For the veterans out there, you’ll be pleased to know the authentic arcade R-Type experience has been preserved. The immensely challenging levels, enemies and fierce boss battles are all intact and ready to take you on. Irem studios has implemented a couple new things here though to make this latest entry that much more special.

The legendary 2D graphics and amazing soundtrack have been ported to near perfection, but now at the push of a button players can switch to a 3D graphics engine that completely transforms the game; giving it HD visuals and revamped sound effects and music. It looks stunning and I love the direction Irem has taken with the new 3D look. Switching between both graphic engines is seamless and really fun to do in battle.

That’s not the only significant change found in R-Type Dimensions EX. For players who have struggled to get anywhere close in beating the game, there is now a new mode call “Infinite”. You are supplied with an endless amount of ships. The goal here is to beat the game with the fewest amount of lives lost. This mode allows you to really flesh out each level and boss to learn the tactics needed to be victorious. With each play through, you’ll get that much more precise and much more aware of enemy attacks and patterns. It’s a brilliant idea that will finally let many gamers experience the full game like never before. There is also a Stage Select so you can really narrow your focus on the levels you need the most practice on. Lastly, you can speedup or slowdown the game to give you a further edge if you wish during space combat. The key here is all these new features are completely optional to players. Both novice and veterans will have an absolute blast with this remaster, because everyone can choose the play style that best fits their experience level.

R-Type Dimensions EX brings out the best of this phenomenal SHMUP in a way that both veterans and newcomers to this genre can enjoy the full game, each and every stage and most importantly every glorious Boss Battle. Being able to switch between the pixel perfect arcade port and the new 3D graphics engine is amazing. Each and every part of R-Type I and II has been brought up to modern gaming standards and the result is absolutely stunning. One of the greatest space shooters off all time has just got even better.

The coin-op classics, R-Type & R-Type II, are together on Steam! Fight through all 14 Bydo-infested stages in retro 2D graphics or shiny 3D graphics - and swap back and forth with the touch of a button 'on-the-fly'. The new 3D graphics are accompanied by fully re-imagined arrangements of the timeless R-Type music tracks!