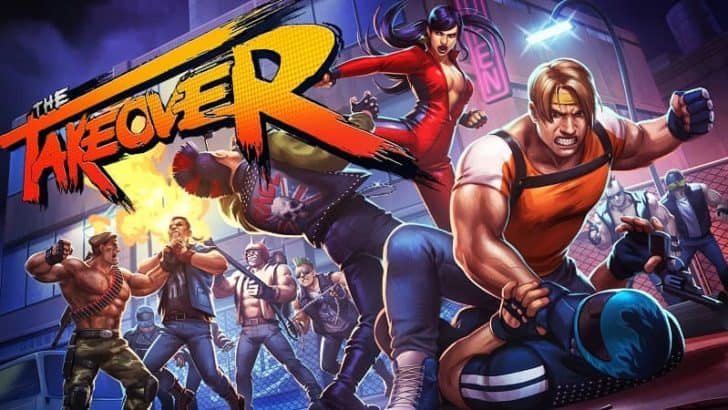 Originally released to critical acclaim in late 2019 on the PC, it’s now Nintendo’s turn to treat gamers to The TakeOver on the Switch.  While there is no doubt a large collection of retro themed games within the eShop library now, this is a truly special title for beat ’em up fans that love the iconic fighters from the ’90s era across the Sega Genesis and Super Nintendo systems.

16-bit Brawler with a Modern Twist 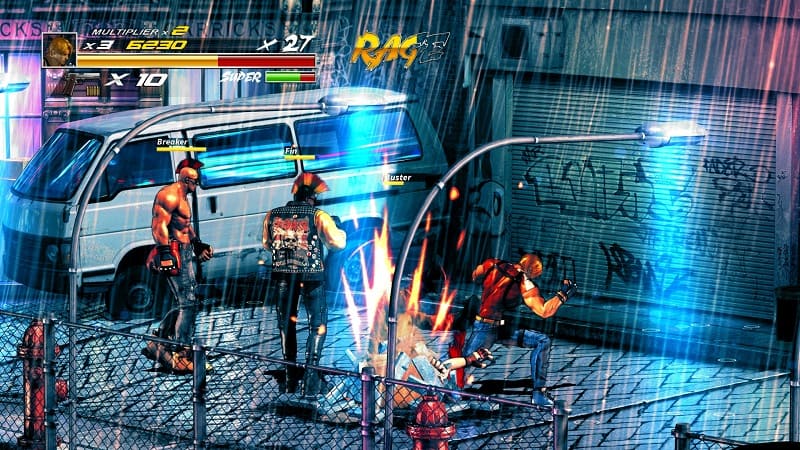 Having just wrapped up Streets of Rage 4, I didn’t think things could get much better for a new release that so well orchestrated the iconic beat ’em ups from nearly 30 years ago.  From the very first cinematic upon loading the game and the accompanied shredding soundtrack, I got the feeling that this game was going to be insanely awesome.  Needless to say, my initial instinct was on point and this game delivers an exhilarating experience from start to finish.

The story kicks off with the discovery that your daughter has been kidnapped.  Ethan and Megan are off to save her, alongside the help of their commando buddy Connor.  It’s a classic storyline that fits right in with this genre and the cut scenes featured in each level are fantastic too.  You can select to play as either of the three here, all with different strengths, attributes and specials.  Beating the game will unlock a fourth playable character, but no spoilers here on who.

Pelikan13, otherwise known as Antonis Pelikanos, has crafted this nostalgic gem with the utmost care and attention to detail.  It has elements that will certainly remind you of Streets of Rage, Final Fight, Street Fighter and Killer Instinct.  It features a gorgeous art style, utilizing pre-rendered sprites alongside an incredible use of vivid color, modern lighting and explosive special effects throughout each stage. 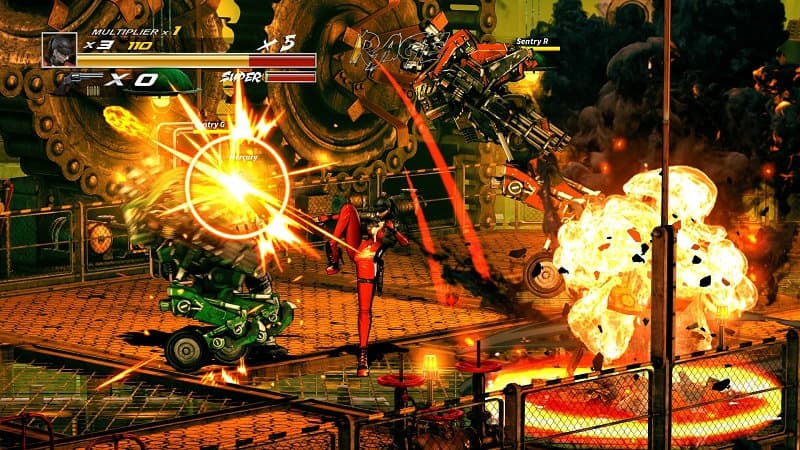 There are several modes to choose from, including: Arcade, Challenge and Survival.  The Arcade mode (local co-op in place of course) is purely the game’s campaign, showcasing a brilliant variety of 22 different action packed levels.  I recommend first starting on Easy, as this game will punish you on the higher difficulty settings.  You’ll fight in pouring rain with the glow of neon lights shimmering on the wet pavement, shoot your way through a jungle full of mysterious beasts, fly a fighter jet over sea and race down a busy highway as you blast your way through enemy vehicles.  It’s incredibly varied, unpredictable and immensely polished in all areas.

There is a really fun and engaging combo system in place where you can juggle your opponents with correct timing; alongside utilizing your uppercuts, hooks and kicks effectively.  Each character has special moves that can be used and are highly effective when surrounded by a mob of enemies.  They are limited, but powerful and a lifesaver when overwhelmed.  These are also great to use when needing to break a chain of attacks from a tough boss.  There are several weapons within the game to use, including swords, crowbars, pool sticks and machine guns.  If that wasn’t enough, you also carry a sidearm.  Bullets are very limited, so use this only to stun a stubborn enemy and then quickly follow up with your standard attacks. 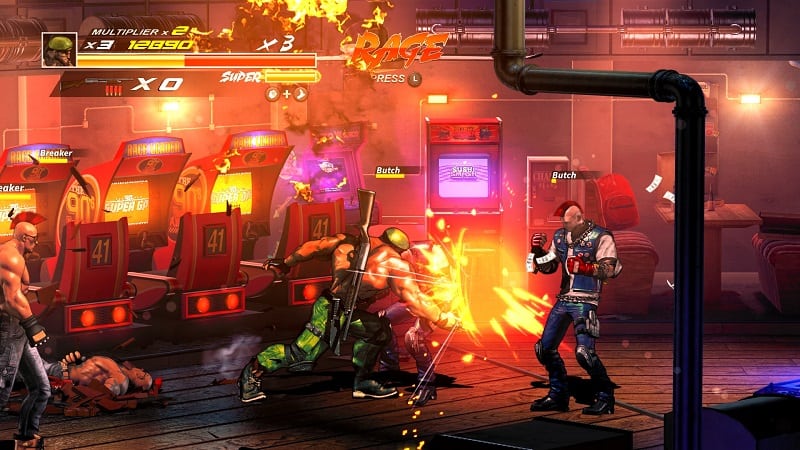 Pressing both the punch and kick button will call in a air strike, that rains down all kinds of devastation on the screen (definitely a nod to the first Streets of Rage).  As you rack up combos, your Rage bar will start to fill up.  Once full, you can activate it, which greatly increases your character’s speed and attacks.  The screen will turn red and you’ll be able to quickly knock out opponents left and right.  This is another good one to save up for Boss fights.

Once you wrap up the campaign, you can test yourself on the Challenge and Survival Modes.  There are specific trials for each of the 20 challenges, including tasks such as finishing the level without using any specials or collecting all stars within the stage.  Survival Mode hosts 5 stages where you must weather the storm from waves of street thugs.  This is an excellent mode to practice on and will teach you how to effectively take on a large variety of enemies.

Another huge accomplishment here is the game’s OST.  Dare I say, it’s one of the best I’ve heard in years.  It’s perfectly blended to the gameplay and composed by extremely talented artists such as Little V Mills, Richie Branson, James Ronald and Yuzo Koshiro.  Each track just rips and makes each stage that much more enjoyable to experience. 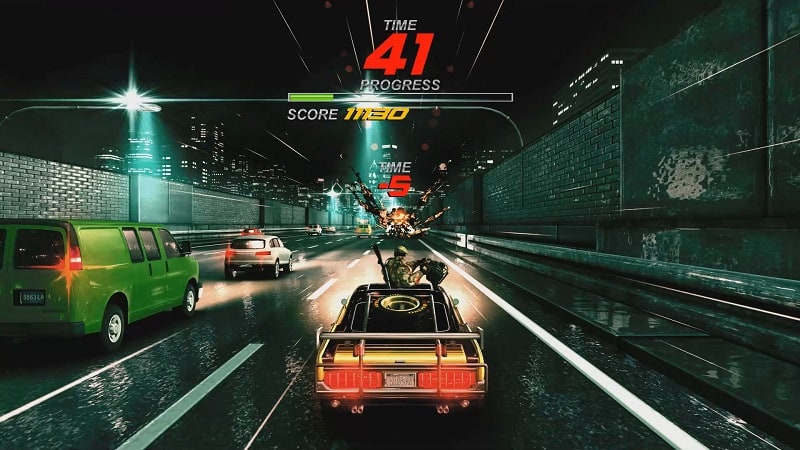 The TakeOver took a little while to make its way over to the Nintendo Switch, but the wait was well worth it.  It’s an incredible beat ’em up, that not only nails the iconic ’90s era of brawlers found on the 16-bit consoles, but also blends in modern visuals, gorgeous effects and a sensational OST to make this one of the best fighters of this generation.  With plenty of modes and co-op play at hand, this is going to quickly become a fan favorite on the eShop. 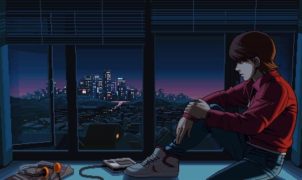