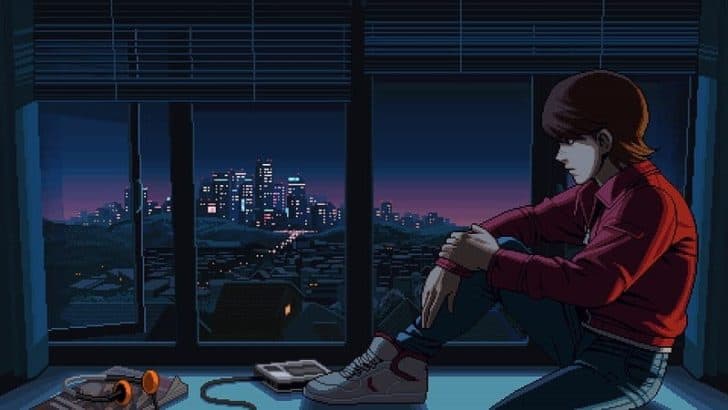 Hi-Bit Studios has just released 198X.  From the moment I saw a few screenshots and read the premise behind it, I knew then and there I had to play it.  Little did I know just how sensational this game would end up being. 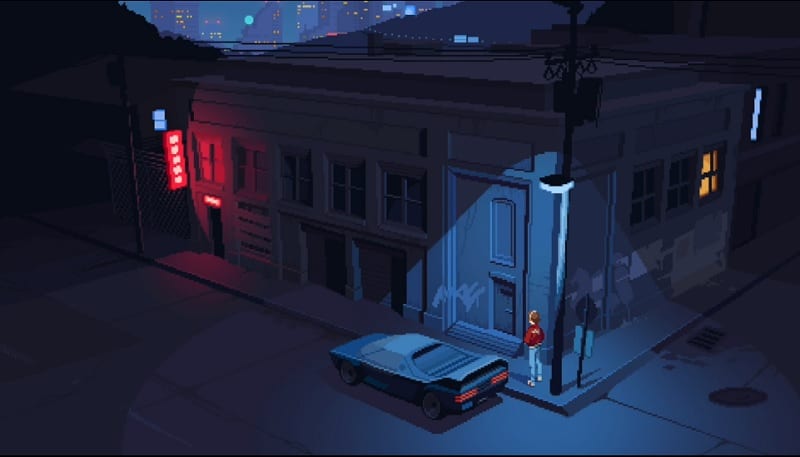 The title above is a motto from the game and it couldn’t be more on point.  In 198X, you follow the story of a kid that is struggling, wanting more in life.  He seeks an escape from his life in the boring and mundane suburbia.  Amazing cutscenes light up the screen with an art style that is oozing with 80s arcade cues.  It’s also backed by an incredible moving soundtrack that has a strong Stranger Things vibe to every note and beat.

Our protagonist is known only by “the Kid” and your eyes will be glued to the screen as you transition from the wonderfully narrated story to gameplay.  And my goodness, the recreation of some of the most influential arcade genres from the 80s have been implemented here with intense care and immaculate attention to detail.

Let’s back up for a moment though and simply discuss the game’s opening.  198X kicks off with a game called Beating Heart, which from first sight is epic fan fare to the classic Streets of Rage series. 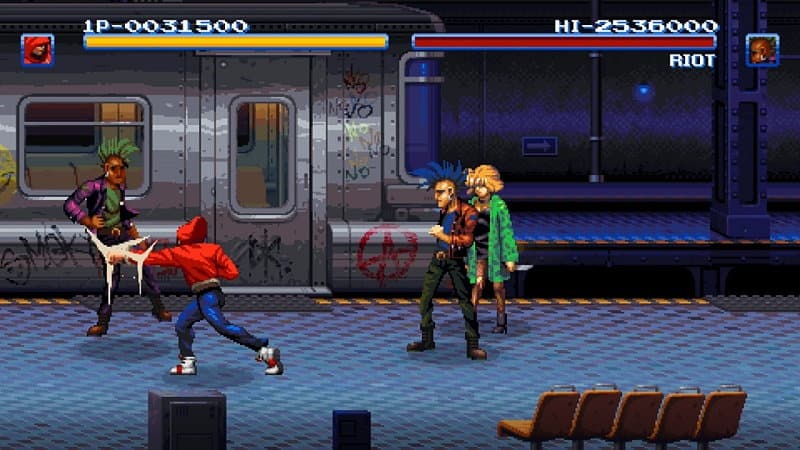 “Let’s make this clear, from the first opening moments, it was apparent this couldn’t be more true to the roots of this iconic brawler.”

You punch, kick, roundhouse, knee and throw each street thug just as you did from the original games.  You can of course destroy phone booths and trash cans for health replenishments.  Once you brawl your way to the end of the stage, the camera slowly pans up above the action, revealing a gorgeous cinematic view of the brightly lit city, just beyond the violent slums and alleys.  Welcome to 198X. 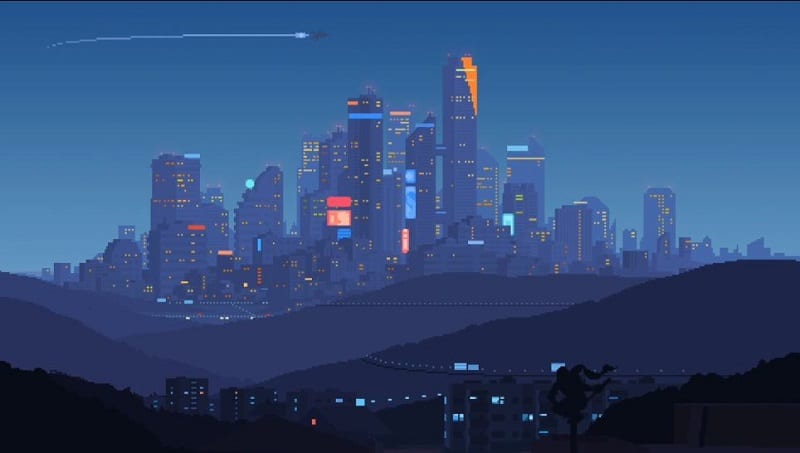 As you progress through the game’s story, our protagonist reminisces of less complicated times.  He recalls early morning Saturday cartoons and long car drives where he would sleep in the back without a worry in the world.  He noted how in his younger years, things like the darkness and the unknown was that much more terrifying, but equally exciting.  Shadows were darker and more sinister, while sunny days seemed brighter in the past.

Another excellent cutscene follows the kid as he walks through his small and simple town.  He spoke how he both loved and hated it at the same time.  Things had changed since the absence of his dad.  We’ll no doubt learn more about that in the coming chapters.  You eventually end up near a building that was supposedly off limits according to his mother.  She insisted this was not a good place and to stay away.  A dark narrow stairway led to a basement.  Neon lights shimmered against the cold and wet concrete.

“On this night, something compelled our protagonist to venture below.  He slowly walked down the steps and ever so slowly opened the door.”

He couldn’t believe his eyes.  The room was packed with misfits and outcasts playing Arcade machines with the likes of games he had never before seen.  The kid walked up to an open machine, popped in a quarter and was swiftly taken away to another world, called “Out of the Void”. 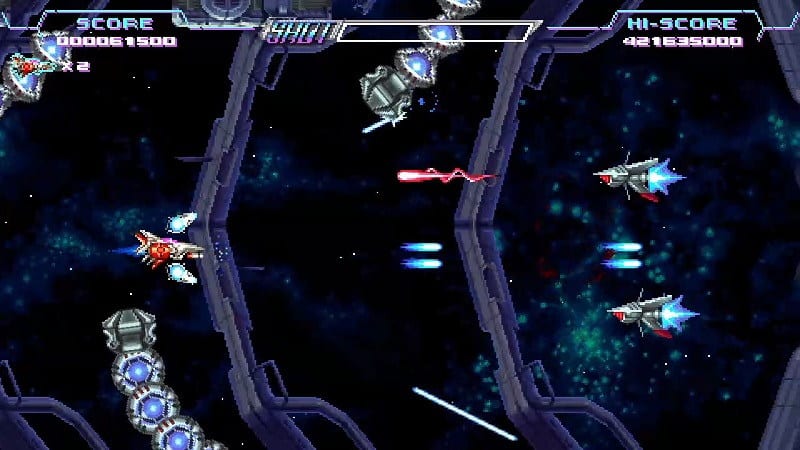 This is an R-Type or Gradius style space shooter.  It’s no walk in the park either, as you’ll be tested by several enemy fighters, large convoys, robotic centipedes and a final boss that perfectly concludes this particular venture.  Holding the fire button will charge up a power shot.  Shooting golden enemy ships will reveal powerups.  Your ship can only take a few hits, so you’ll have to learn each enemy trap and asteroid field formation to safely make it to the end.  It’s a spectacular trip back to this genre. 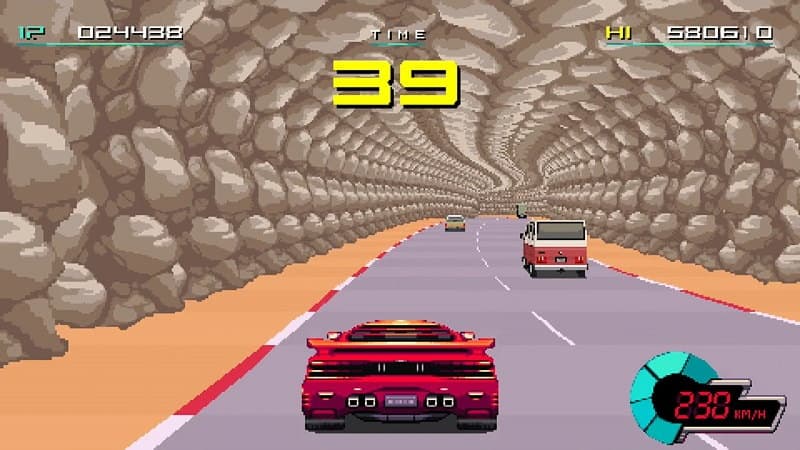 Another gorgeous cutscene is played, which ends with a black domestic muscle car quickly taking off from school.  The next game begins which is fantastic mashup of Out Run and Rad Racer.  Here you will have weave through traffic and slide through turns to reach each checkpoint, which awards more time to the clock that is constantly counting down.  The second part features a race towards the bright city, similar to the one the kid looks out of within his bedroom window every night.  The artistic lighting and vivid colors present here are a real treat.  The second phase of this race kicks in with narrative about the kid’s hopes and dreams.  You’ll keep the pedal floored, desperate to make that last checkpoint, but ultimately find out it will be impossible to reach. 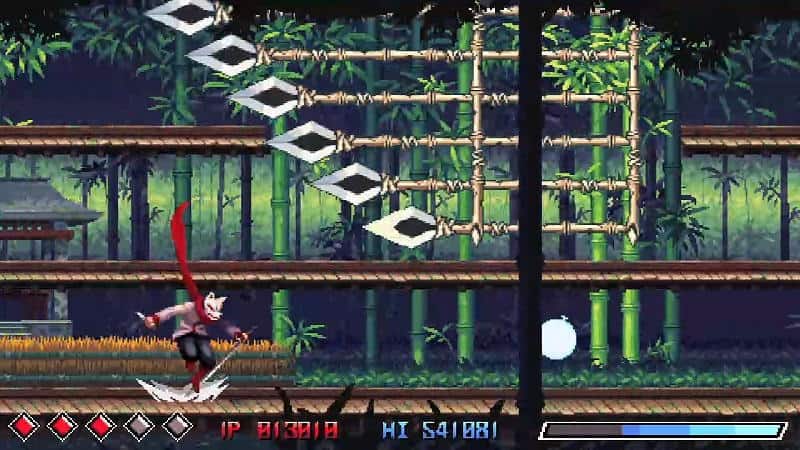 The next game proved to be the most challenging of the bunch.  Not surprising, as it’s a love letter to the classic Shinobi and Ninja Gaiden games.  It’s also a runner, as the screen stays moving at a frantic pace.  You’ll not only have to be lightning quick with your blade, but there will also be spikes, boulders, spears and cliffs to avoid at the same time.  Blue orbs are scattered throughout the levels, often requiring jumps or slides to grab.  Collect enough and your attack range is increased.  The final area features a terrifying creature that chases you with ill intent.  You’ll have to memorize every attack pattern and the entire stage layout to stand a chance on finishing this one…good luck! 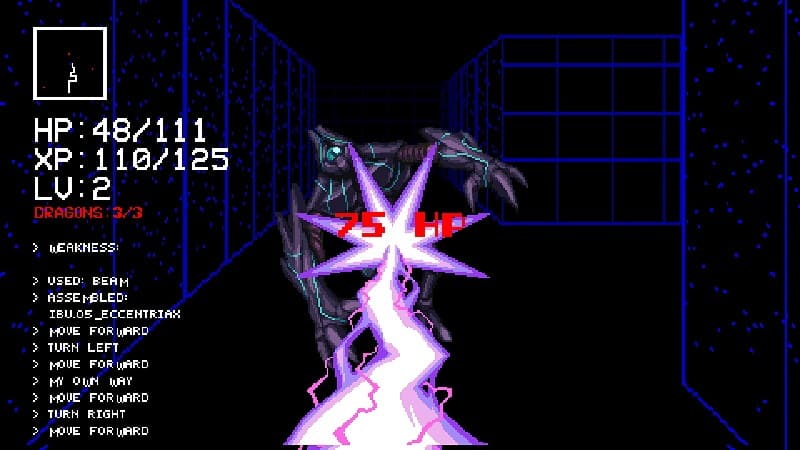 The fifth game you’ll play is highly favorable to 3D Monster Maze, which is one of the very first 3D adventure games with a horror theme.  Here you will have to traverse through a maze as well and battle a variety of monsters.  For battle, turn based mechanics are in place.  You can Slash, Hack, or shoot a Beam at each creature.  You also have a Heal option, which is crucial to surviving.  To win, you need to find and slay three dragons.

As you defeat more creatures, you will level up, increasing your health and damage stats.  The computer is constantly talking to you.  It explains how you can’t win and there is no way out.  It taunts and lectures the kid, sounding all too familiar as he’s heard these things before.  As you begin to find and eventually grow strong enough to defeat all the dragons, the AI begins to weaken and even resorts to pleading for help.  What happens next is for you to find out. 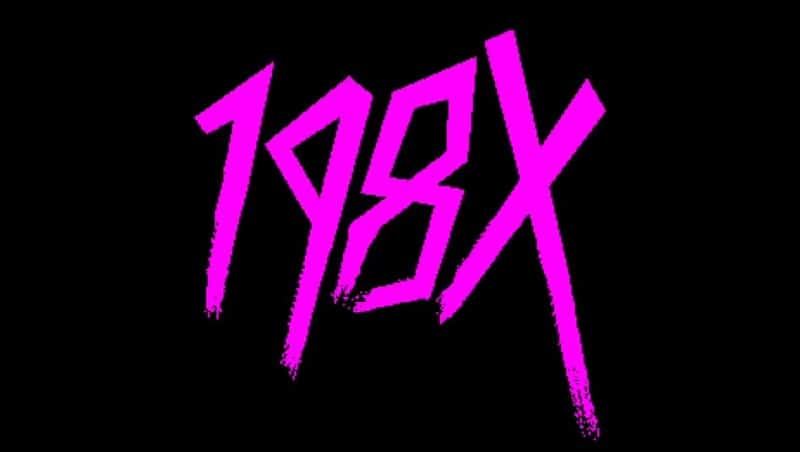 198X by Hi-Bit Studios provides one of the most memorable trips back in time for retro gamers, where every town had a local arcade that was packed with neon infused lights and an electric atmosphere.  It was like stepping through a portal, where tokens unlocked doors to new worlds and alternate dimensions.  The cutscenes created by the devs are wonderfully authentic to this era, as is the sensational soundtrack.  Each brilliant recreation of every classic arcade genre presented here is just awe inspiring.  I simply couldn’t put the controller down till the final credits rolled.  It provides one of the greatest retro gaming experiences to be had this generation…and it’s merely part 1 of 5!