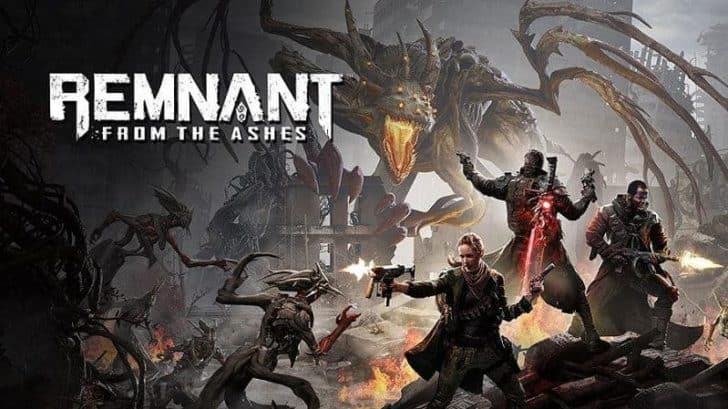 In Remnant: From the Ashes, gamers start off amidst an angry sea, with towering swells threatening to swallow them whole. It’s a grim scene and it appears all is lost after a rogue wave capsizes your boat. Miraculously, as if by fate, you wake up on an island. You’ll soon realize this is not a peaceful sanctuary. Before you know it, strange creatures known as the Root are already hunting you in numbers and they are unlike anything you have ever encountered. There is much to fear here. What is this place…where am I?

Remnant: From the Ashes has the feel and mechanics from quite a few iconic franchises. It’s a third-person action shooter with glimpses of Gears of War, while the tone, feel of despair and Boss battles have a souls like presentation. The abandoned cities, dark forests, swamps and treacherous dungeons all look the part and really do a great job immersing players within this cold violent world.

While Gunfire Games clearly had some inspirations from some of the games listed above, they have at the same time crafted a very unique IP here with distinct gameplay elements, making it stand apart as its own entity. The focus on firearms and ranged combat give this a really different feel from previous Git Gud titles. The game’s world is dynamically generated for each play through and for each and every gamer. This is not a scripted campaign, allowing you and your friends to have completely different experiences within the same world.

One of the defining features in place here is the Reroll ability. If you happen to be stuck or simply wish mix up the experience, you can Reroll your game. You keep your character, gear and stats, but outside of that the game starts anew. You might encounter new bosses, items and mods…it’s ingenious.

After being rescued from the Groot like ghouls you encountered in the opening act, you awaken at Ward 13. The good news is you aren’t alone in this fight for survival. This area is the nexus of the game and here you will meet NPCs and be tasked with your first official objective by the group’s leader. You must first restore power to a reactor in the basement to demonstrate your worth and commitment to the cause.

Once you complete this and your trust is earned, you are given a significantly more difficult and far more important task. The tower you saw on the rough seas is the very heart of the evil residing on this island and it must be destroyed. However, there is only one person that can successfully breach it and they have gone missing. He’s known as Founder and locating him is absolutely paramount to eliminating the threat at hand. Unfortunately, standing in your way is over 100 different types of enemies and 20 punishing bosses to deal with across this dark and unforgiving landscape…good luck.

Now it’s time to venture out into the unknown and face some truly nightmarish creatures. First however, its time to select a class. You can choose from Hunter, Ex-Cultist, or Scrapper. Each have their own distinct advantages and mod. It should be fairly easy to pick what best suites your play style.

The weapons feel fantastic in use. The tension and realism is heightened by only allowing shots to be fired once you raise your rifle or pistol and look through the sight. If an enemy charges you, leaving you no time to raise your firearm, you can hit the fire button to melee them. As you start to get the feel for the combat, the enemy body count will start to add up, boosting your weapon mod bar. This is when you can make use of your special, such as incendiary ammo or activate a healing mod. You can swap your character specific mods to different weapons as well.

Ammo can go quick, so whenever possible, get in close and use your ax, sword or hammer to eliminate enemies. Rush in and take them out. Utilize the roll and evade as much as possible without exhausting your stamina bar. Explore each area thoroughly for loot, weapons and gear. Once you clear out an area it’s Boss time. This is especially when you wan to be playing cooperatively. Some of them are close to impossible to finish off by yourself, particularly when you have their minions to deal with as well during the fight. However, the thrill of victory alongside your chaps once you deal that final blow to a insanely challenging boss is what this game is all about.

Remnant: From the Ashes could be the sleeper hit of 2019. It is drenched in dark fantasy and features grotesque creatures straight out of your worst nightmare. The combat is phenomenal, making each battle incredibly gritty and pulse pounding. Its cooperative gameplay steals the show, as it offers up one of the most unique, challenging and thrilling experiences of the year within the action RPG genre.

Remnant: From the Ashes is a third-person survival action shooter set in a post-apocalyptic world overrun by monstrous creatures. As one of the last remnants of humanity, you'll set out alone or alongside up to two other players to face down hordes of deadly enemies and epic bosses, and try to carve a foothold, rebuild, and then retake what was lost.