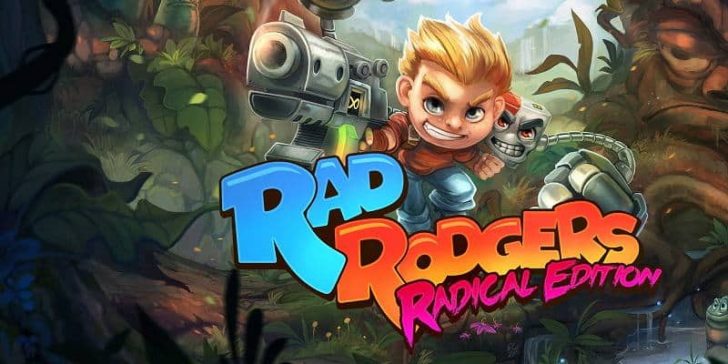 Rad Rodgers: Radical Edition is a tribute to the phenomenal 90’s gaming era.  For those lucky enough to have grown up playing video games during this time period, this 2D shooter/platformer will spark some serious nostalgia.

A Return to the Era of 16-bit Gaming 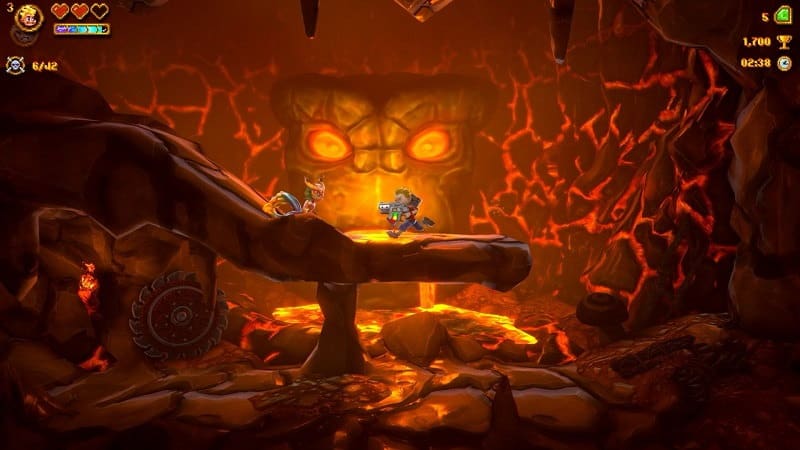 Slipgate Studios alongside publishers, 3D Realms and HandyGames, have crafted something really special with Rad Rodgers.  Everything from the bright pixelated sprites, to the run and gun 2D shooting will bring many players back to the iconic SNES and Genesis days.

The game kicks off with our protagonist trying desperately stay awake while playing a video game.  He’s soon told by his mother to get his butt in bed or else.  He’s all too unhappy about it (we all experienced this travesty growing up).

Something completely unexpected happens next, as his television comes alive and somehow opens up a portal of sort.  It sucks him into the this different dimension, which is of course straight into the video game world itself.  Luckily his trusty game console is there to help (cleverly named Dusty) and you both are tasked with saving the day.  Every kid’s dream right? 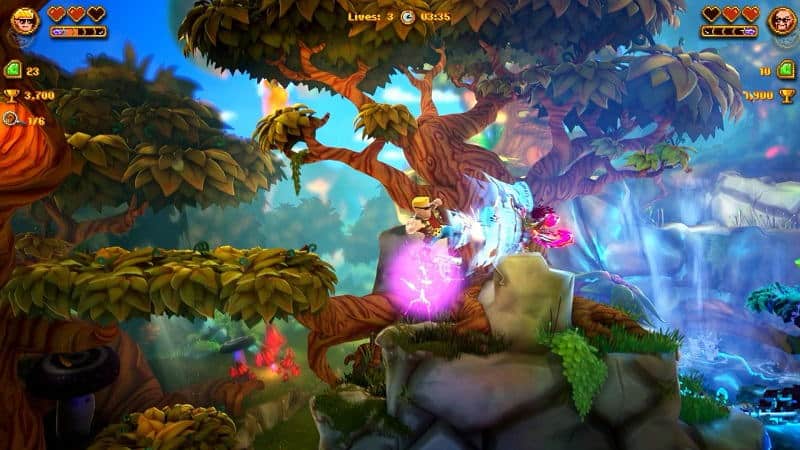 Rad Rodgers not only imitates the look and feel of the 16-bit era, but also managed to get one of the most iconic and outlandish characters from this generation.  If you played any shooters during the 90s, you absolutely are familiar with Duke Nukem.  You’ll be able to unlock this guy as a playable character and you don’t even have to finish the game first.  Switching characters is a breeze, as you can change it up by simply pausing it and selecting a new character from the system menu.  Fans will be happy to hear that Duke comes equipped with many of his popular quotes as you obliterate enemies with a wide variety of the game’s weapons. 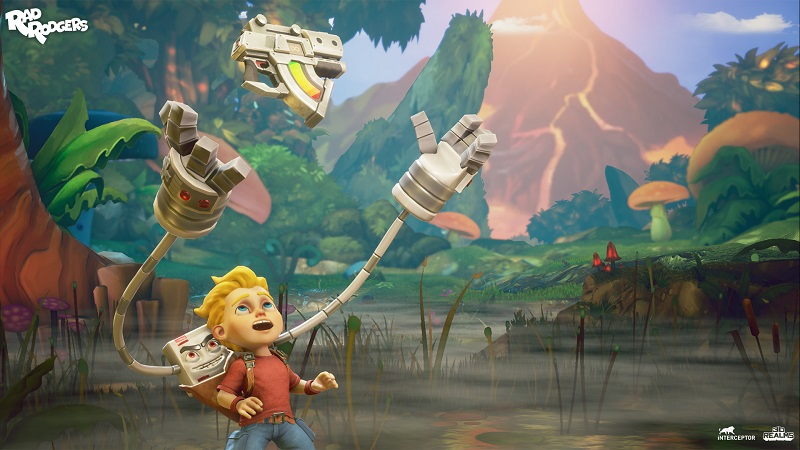 Pixelverse introduces a truly unique gameplay element in Rad Rodgers.  As you progress through the campaign, you’ll encounter game glitches that your trusty companion Dusty will have to fix.  They are often something blocking or missing from the stage that prevents you from going forward.  They are simple to knock out, but fun none the less and it’s a brilliant idea to mix up the experience. 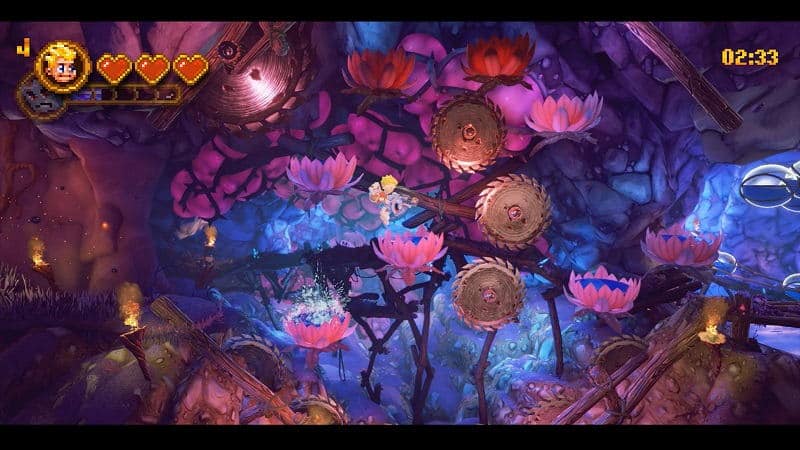 There is no shortage of power-ups through each stage and you”ll no doubt eventually have a few favorites.  Some offer more power, or feature a higher rate of fire; while others have a wider blast radius.  The combat feels nice and solid for the most part.  I occasionally had trouble dialing in my shots when an enemy approached some certain angles up high.  Each firearm however was pretty powerful, so this helped even out the odds when my aim wasn’t exactly perfect.

There are multiple modes to choose from including: Campaign, Co-op and Battle.  Here are some words from Frederik at 3D Realms on the game and what this Radical Edition offers.

“We love Rad, and we thought he deserved some awesome new friends to play with,” said Frederik Schreiber, co-owner of 3D Realms. “With new levels, weapons, couch co-op and a versus mode, I think our fans may have a hard time putting this game down.”

The couch co-op and versus modes are two very welcome additions.  These give the game some replay value after the campaign is knocked out.  We should also note you’ll also be treated to a fantastic music score while playing, that is composed through old school synthesizers.  It’s simply a well rounded old school package for retro gamers. 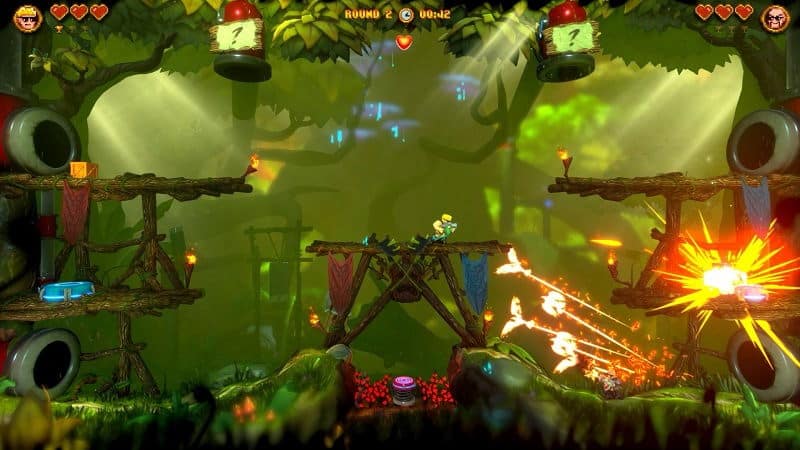 Rad Rodgers: Radical Edition for the Nintendo Switch is something every gamer should play that grew up during the 16-bit gaming era.  It’s a gorgeous trip back in time that is soaked in pixelated nostalgia.  Some of the finest 2D shooters were born on the SNES and Genesis, and this title will bring you straight back to that golden age of gaming.

After being sucked into the gaming world, Rad Rodgers and his foul-mouthed living game console Dusty set out on a totally awesome quest inspired by ‘90s classics like Commander Keen and Jazz Jackrabbit. Jump, run and gun across seven gorgeous, vibrant levels filled with action. Rad wields wicked weapons like Bolt Blasters and Phoenix Cannons to blast baddies. Dusty helps out by crossing into The Pixelverse, a behind-the-scenes area that enables him to fix broken parts of the game world.