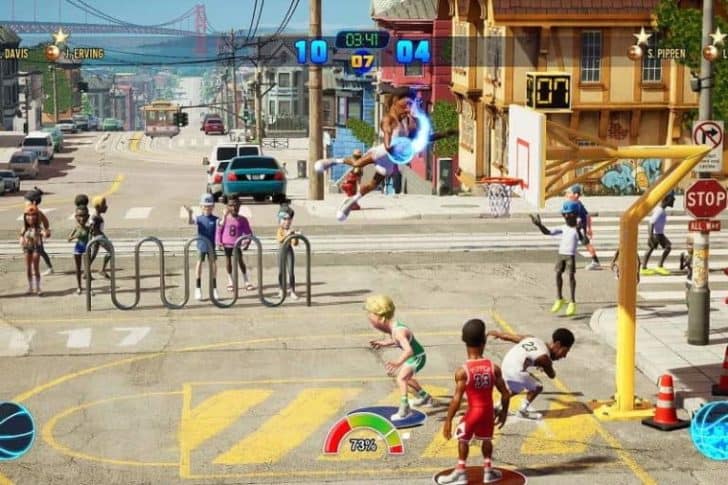 When I first received the code to review this game I saw the name Saber Interactive and immediately thought “Is it THAT Saber Interactive?” As a big time Halo fan, I recognized them through their work on multiple games in the series. Instantly intrigued at what this talented developer could do with a drastically different property and genre I dove into the game. This type of game owes a lot to the retro legends of the past, primarily the NBA Jam arcade games as well as the NBA Street series. 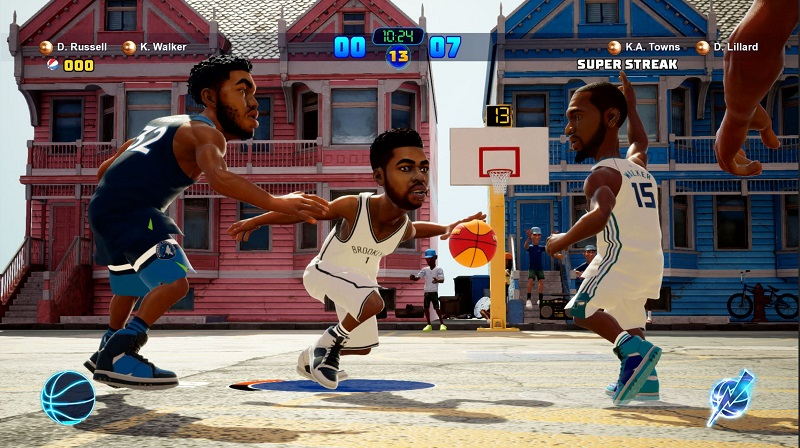 The gameplay is solid and plays silky smooth with a hint of simulation. An accuracy bar at the top of your shots appears at various sizes depending on your player’s stats. Within minutes of gaming you are throwing towering alley oops and breaking ankles with devastating crossovers, the gameplay is super easy to pick up but once you master it you’ll be on an entirely different level. As you pull off moves, dunk on fools, cross up defenders and generally show off your special meter will fill up giving you a random powerup. Just like NBA Jam, should you hit enough shots in a row you’ll catch fire and be able to sink a shot from anywhere on the court.

Upon advancing passed the start menu, the game gives you a few card packs. These unlock players and swag to dress said players with more flair than is usually seen on the court. I’m not the biggest modern day fan but I watch enough ESPN to know the primary players. I instantly unlocked a few basic and epic players as well as a legend player. As cool as that was, I was turned off when I went into exhibition mode and realized I could only use the players I had unlocked. Even worse none of my players had a good dunk rating, which if you’ve ever played an arcade basketball game is the most important attribute outside of stamina. Time to figure out how to rectify this as quickly as possible. 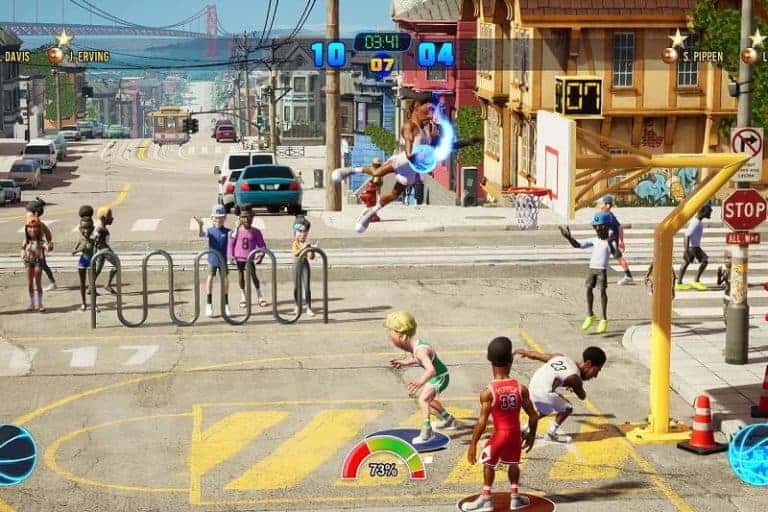 Unlocking players through random card packs is the name of the game and the primary hook to keep you playing. At $30 this game is a steal but I found it to be a little disappointing that I need to immediately drop another $10 in real world money to unlock the full roster. In older arcade style games, the basic rosters would be unlocked and you’d grind to get unlockable legends and secret characters. In Playgrounds 2, you are forced to run with a squad of scrubs. Fortunately, as you play the players used gain XP and evolve from bronze to silver to gold and finally diamond, increasing stats across the board. Being the cheapskate, budget gamer that I am I sat out to grind the old fashioned way. I hopped into the season mode so I could play several games. The game gifts you two players to fill out the roster of one team from about half the teams in the league. Being from the Carolina’s I picked the Charlotte Hornets, instead of Kemba Walker I was gifted Willy Hernangomez and Malik Monk. Upon selecting the Hornets I was informed that a legend would be unlocked if I managed to win the NBA championship. My prize, basic card Larry Johnson, was cool and all until I discovered winning with the Lakers gifted the legend carded Magic Johnson. Time to make lemonade with these lemons and I did just that winning my first championship defeating Jordan and Pippen from the Bulls in the East and toppling Curry and Durant in the Finals. With enough credit to unlock a gold pack I decided to test my luck, I got Steph Curry and Knicks bad boy Charles Oakley from the pack. I finally had the superstar sniper and defensive dunkmaster I needed to stand a fighting chance online. 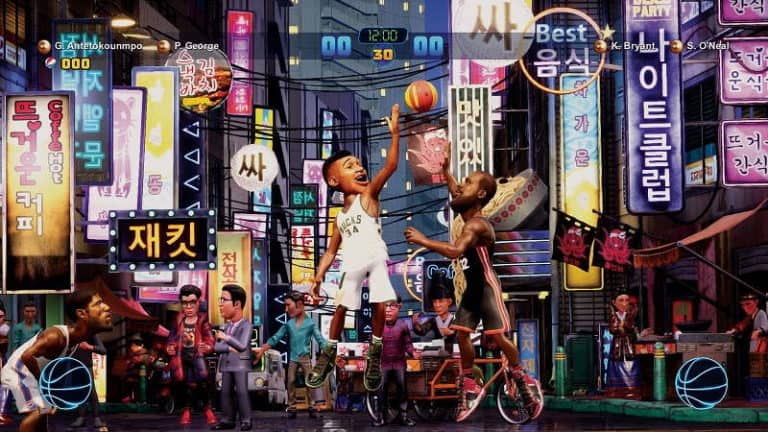 Several hours in and I’m finally to the lifeblood of this game, the way an arcade sports game was meant to be played, playing against another human! First game went quite poorly as I quickly picked my two players only to look at my opponents roster. Yup, this man spent that $10 as every player was at his disposal. I watched as he unleashed a diamond rated Michael Jordan and Lebron James. I was thrashed, to put it mildly, but I did get a good look at something I failed to realize earlier. The majority of the top tier players have special animations that were a sight to behold. Curry on my side of the ball even has that lightning quick crossover he’s known for. Jordan’s famous free throw dunk animation was in full use throughout the beat down. Luckily after that match the opponents came back down to earth and I thoroughly enjoyed my play sessions over the next few days. Opponents were always easy to find and the netcode is solid with almost zero hiccups.

The game also includes a 3-Point Contest mode, available online or against the CPU. It’s not world changing or anything but it’s solid mode to will help with the accuracy of your shots in the full game. I do lament not having a local friend to play couch co-op which I’m sure would allow this game to shine even brighter. The only other thing I did found odd is the lack of roster updates as of this review. As someone that doesn’t regularly watch NBA TV, I still know that Dwight Howard is no longer a Hornet. Several players were on the wrong teams and several legends seemed to be missing such as Karl Malone and Patrick Ewing. Although the developers can’t be blamed for what is surely a rights issue for said players.

NBA 2K Playgrounds 2 is the perfect game to quench any thirst you have for the nostalgia of NBA Jam. Fast, but not too fast gameplay with a hint of simulation shooting sets it apart from its forefathers. This game has a fantastic art style and flair in spades on the court. Unfortunately locking the basics of the genre behind a paywall seems to grind against the arcade foundation of this series. Budget friendly pricing definitely helps it compete against it’s 2K sibling as well as EA’s NBA Live as it easily punches above its weight class.

NBA Playgrounds is a 2017 sports video game developed by Saber Interactive and published by Mad Dog Games for the Nintendo Switch, PlayStation 4, Xbox One, and for Microsoft Windows.