Guns, Gore & Cannoli 2 puts players right back into the action as Vinnie Cannoli. For those new to the franchise, it’s set in the 1940s. The country is in turmoil and a violent mob based turf war continues. 15 years has passed since Vinnies last crazy adventure where he barely survived the infamous Thugtown Massacre. No spoilers here, but don’t worry as the entire timelapse and everything that has transpired since the first entry is explained and you’ll be brought up to speed in quick order…and then the action begins.

Players will now be traversing the European battlefields, streets and clubs that showcase some great attention to detail from this era. We really enjoyed the fantastic colorful visuals from the first venture and the sequel does not disappoint. Everything from the explosions to the backdrops have an extra level of polish. It looks and runs fantastic on the Switch. The animations and frame rate are incredibly smooth, ensuring solid action packed gameplay without any distracting performance issues. The cut scenes are highly polished too. In short, it’s a beautiful game and art style. 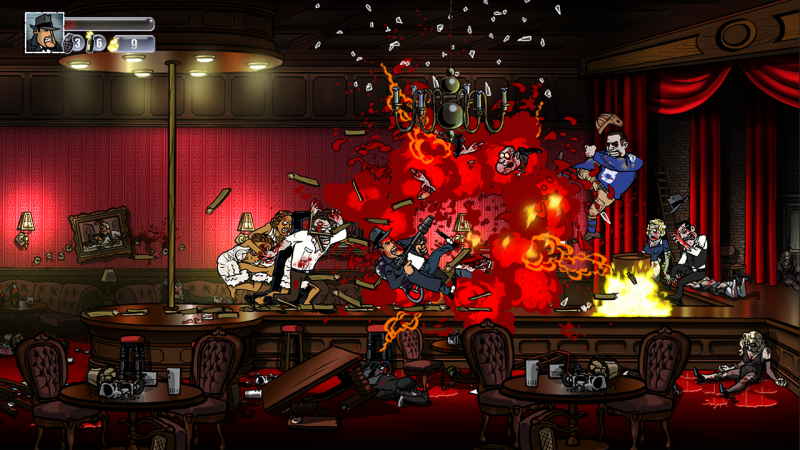 For those that played the first title, it features the same chaotic run and gun mayhem, but with some big changes and without a doubt a higher difficulty. Players should note there is an aim assist option for those looking for a less challenging play-through. Best of all, Vinnie can now aim in any direction. It may not sound like a huge deal, but not being able to take out enemies unless they were directly in front of your machine gun’s line of fire made it cumbersome at times. That headache is thankfully long gone and players can now take out any foe from any angle, making the action much more fluid. 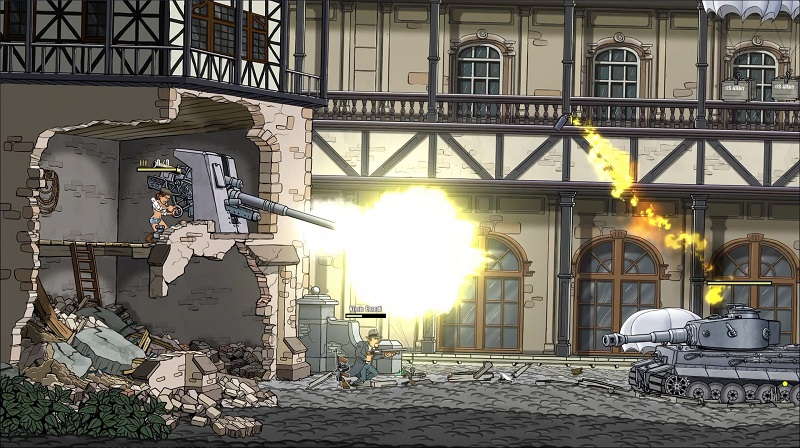 Vinnie also has more options in evading enemy fire and explosions. Roll, jump kick Nazis and pull off double jumping somersaults to take out zombies in style. Players can now pull up a new weapon wheel to quickly select their favorite weapon or the most appropriate firearm at that particular time. This allows for quick, on the fly weapon adjustments and you’ll need it as Guns, Gore & Cannoli 2 requires more strategy than one might think. You’ll be taking out walls, floors and even buildings in this sequel, which certainly has ramped up the level of carnage and in-game destruction. Local campaign co-op makes a welcomed return and is as one would imagine a blast.

Guns, Gore & Cannoli 2 offers up even more chaotic campaign action, plenty of humor, a largely improved 360 degree shot radius; plus local and online co-op for some serious firefights. The visuals, backgrounds and animations look phenomenal. The game’s performance even during complete chaos is excellent. Whether you are a fan of the first game or new to the series entirely, this is a fantastic pick for 2D shooter fans.

Guns, Gore & Cannoli 2 revives the good, old, action platform run & gun genre, but this time with a bunch of humor and buckets of blown off body parts.