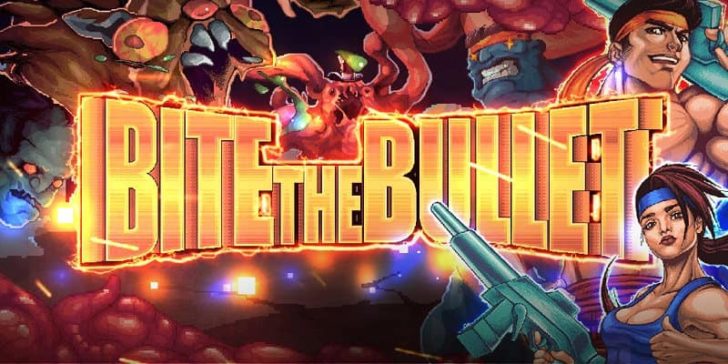 Mega Cat Studios is back with another 16-bit themed title, this time modeled after the iconic 2D shooters like Contra and Metal Slug.  Bite the Bullet is an ambitious release.  It features some very unique Action-RPG elements that have never been seen before in this genre or any other for that matter.

You are what you Eat

In Bite the Bullet, gamers are facing a post apocalyptic setting, where humanity has been hit hard by a tremendous food storage due to the toxic atmosphere surrounding them.  In order to prevent extinction itself, implantable bionodes were created that allows our protagonists to consume pretty much anything.  You are the equivalent of a tiger shark on land. No matter what enemy you face, whether it be human, creature or machine, you can devour it once you fill it with enough hot lead. 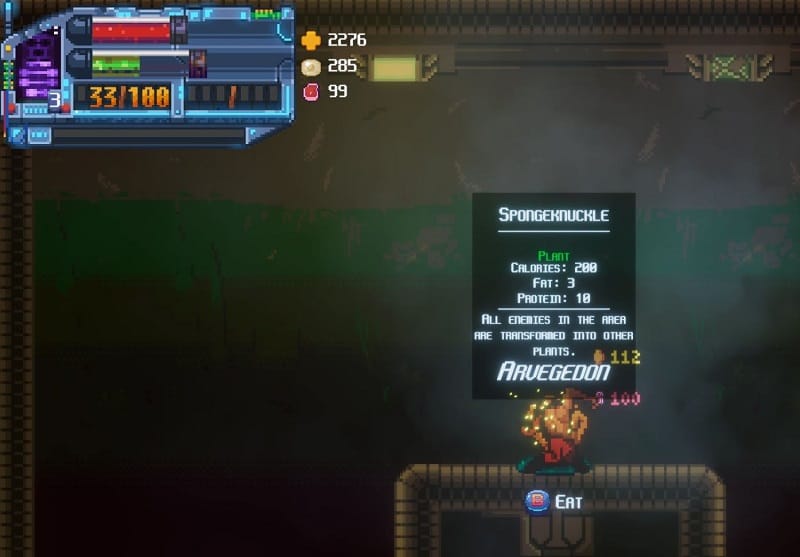 Many fled to other planets to survive, while those who remained were forced to find safe shelter.  A horrible fate waited for those stuck in the poisonous fog.  This eventually turned them into horrifying creations.  Also residing on this perilous planet are several mutant beasts and ghouls. This is what our two protagonists are up against.  Gamers can play as two experienced mercenaries, known as Chewie and Chewella.

“It’s up to them to save Earth, one bullet and one bite at a time.” 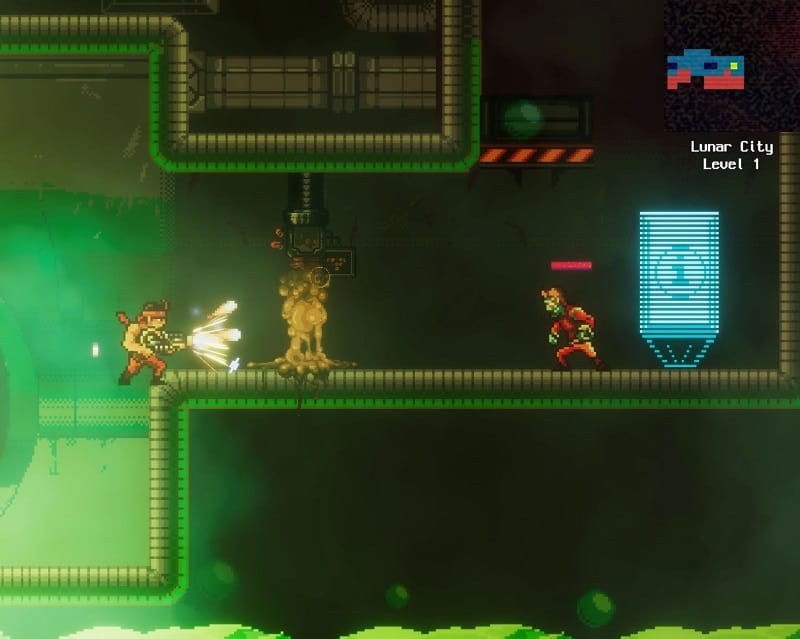 As you blast your way through each area, be careful not to completely destroy enemies when you need to feed.  Once you deplete enough of their energy bar, you’ll stun them.  This is when you can run up and actually see what your meal consists of, before chowing down.  These tiny details are crucial, as each enemy has certain properties that will directly affect your character.  You can even hulk smash your foes once you have gorged enough, which is very helpful in clearing out areas that are packed with enemies. 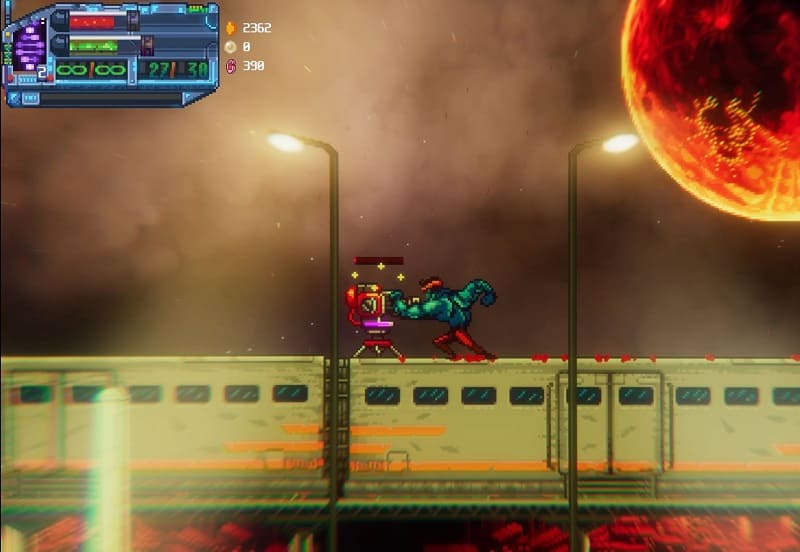 The food sources are broken down to meat, plants and metal.  These correlate to four classes, including the following:

There are 8 colorful levels to play through within the campaign.  This includes Lunar City, Cronus, the Dry Ocean, Fenris Memorial Hospital, Ammit Bio Labs, Megawoods, Silo Descent and eventually The Throne of Ghouldom as your final challenge.

Each stage, character, animation and effect looks exceptional, resembling a highly polished Genesis title.  It can be played up to 1440p and at 144Hz.  This is the mode we selected and it played beautifully on these settings.  It wouldn’t be a proper shooter without some crazy boss fights and Mega Cat Studios has nailed this area as well.  Each one is large and punishing.  They all consist of a monstrous creature that is part machine.  Our favorites are the Flesh Golem with an artillery missile backpack and The Eyeful (think of Krang from TMNT mixed with robotic legs and laser cannons). 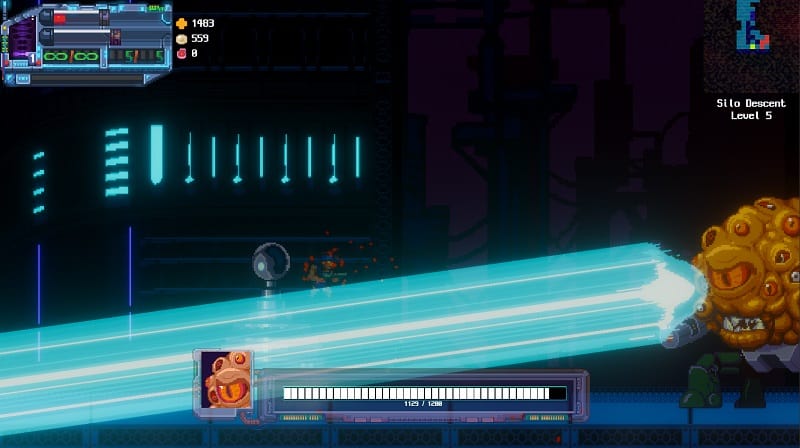 The gameplay feels rock solid overall.  Mixing up your arsenal, while double jumping and dashing to clear enemies and obstacles feel second nature in quick order.  You can really move quickly through each area with enough practice.  Get up close and personal with the shotgun like Shroomstick, or mow your enemies down from a distance with the A-Salt-Rifle that has explosive rounds as its secondary fire option.  Other over the top weaponry include a Meat Seeking Missile Launcher and a Buffet Blaster that hurls silverware for massive damage.  A robust skill tree is in place, where you can choose exactly which powerups and class you wish to invest in. 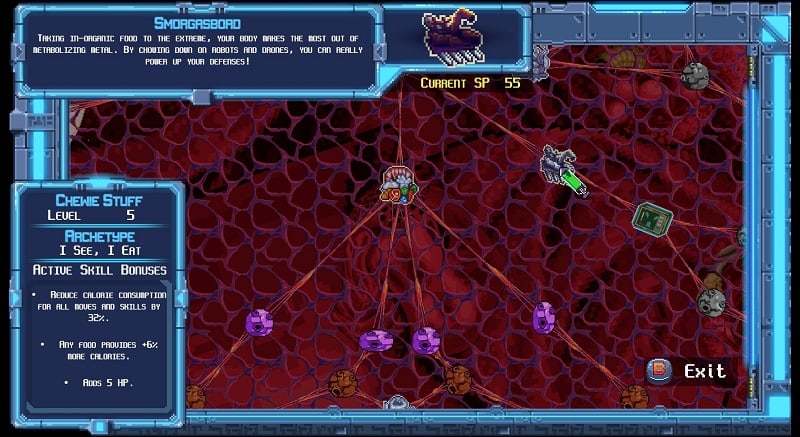 While you are pretty much on your own for this adventure, there is one surprising furry companion that has your back.  Ham Hams are giant, mutated hamsters that will swallow you up and grant you passage through perilous areas.  They get you across spots with deadly shrapnel and spikes.  This is a great example of just how much fun the team had creating this title.  Players will also find warps in each level, that either lead to specific challenges or notable in-game characters that can be of great help.  Completing the set objectives will reward you with certain bandannas that unlock special abilities, such as extra ammo, increased health and even invincibility. 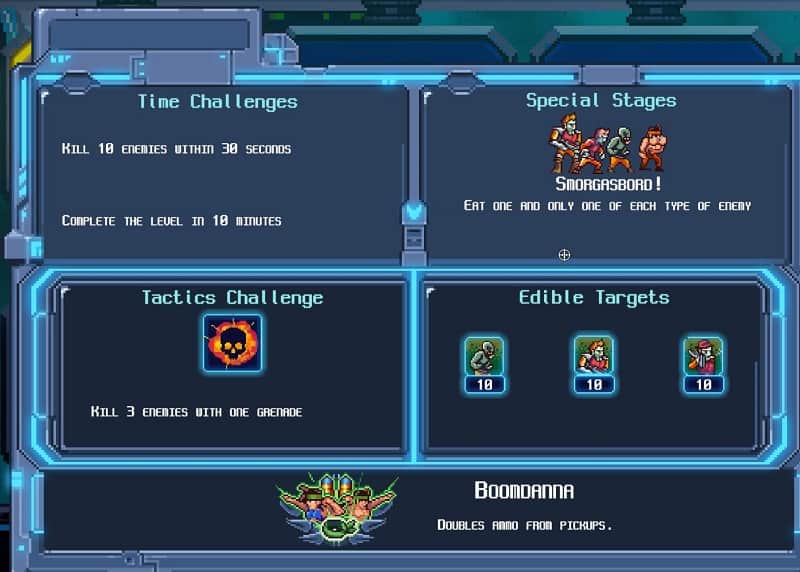 Bite the Bullet is arguably the most ambitious game yet from Mega Cat Studios.  It’s a thrilling shooter with loads of style and humor.  The pixel art is beautiful and the gameplay is tremendously unique in how they have created a system where you have to strategically eat to survive.  There are loads of crazy enemies to blast away with an awesome assortment of powerful weapons; plus some truly epic boss fights to test your skills on.  The soundtrack is fantastic, complete with some heavy metal riffs and dark cyberpunk synth wave beats.  It has that old school difficulty in place, but as you level up your class of choosing, you’ll soon find yourself progressing further and further into the game.  It’s a riot to play and unlike any other 2D shooter on the market (available on the PC, Xbox, PS4 and Switch).