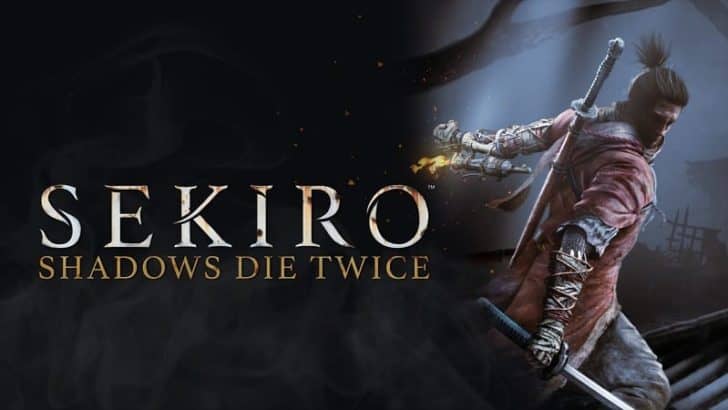 Sekiro: Shadows Die Twice shakes up the standard formula by From Software with brand new gameplay elements, where even the most experienced Souls players will be humbled time and time again. It forces a new approach to combat where gamers will likely have to retrain and adapt completely new offensive and defensive styles to survive. Aggression is awarded, but at the same time it’s a game of immense strategy, stealth and patience. The Git Gud genre just got rebooted.

It doesn’t take long for the game to unleash its absolute brutality onto players, giving gamers a glimpse into just how steep the difficulty will be in this latest entry by From Software. Wolf, the game’s protagonist, is a lethally trained Shinobi. He faces a steep price and a fatal wound during battle with the leader of the Ashina clan. Luckily, he is by chance later spotted by a stranger who’s called “the Sculptor”. This mysterious figure fits Wolf with a prosthetic arm that can be enhanced with mechanical contraptions that are of great use during battle. Wolf must now continue his quest, exploring the lands ahead for his lord that was kidnapped and extinguish all those who dare stand in his way.

The only thing the Souls series share in common with Sekiro’s combat system is the promise that a few missteps will guarantee death. In fact, many will attest this is the most difficult game that From Software has ever produced (a scary thought I know).

To state this is incredibly difficult is an understatement. That in itself may be enough alone to make many more than a little weary of even considering picking it up, but that would be a grand mistake. I’d implore those on the fence to make the jump, as it delivers a thrilling experience unlike anything else out this generation.

Progress can be made and battles will eventually be won, with enough practice and patience in place. The immense feeling of victory once you finally defeat a punishing boss makes every death and frustrating failure before it worth a hundred times over.


There are no shortcuts in Sekiro. It rewards strategic combat and punishes all else.

Combat is frantic and an adrenaline rushing event, pure and simple. The key to survival during these battles is to break your opponents posture. Blocking will save your health in most cases, but deflecting right before the incoming attack lands (Left Bumper) will stun and open your opponent up for a fatal blow. This deadly strike (Right Bumper) is showcased by showering the air with your enemies blood, quickly depleting their life in a brutal stylistic fashion.

The Posture and Health gauges must be carefully assessed in order to determine how each fight must be tackled. If you deflect incoming attacks and notice very little change to their posture bar, you’ll need to focus on dodging and landing actual hits instead.

The reverse situation will see players focusing on breaking the posture bar and quickly ending the fight with a satisfying death-blow. You’ll have to figure out each enemy, their unique weapons and attack patterns to be successful. It takes time and as discussed before, lots of patience. There are no shortcuts in Sekiro. It rewards strategic combat and punishes all else.

Resurrect and Redeem Yourself

After each rest period, you will reclaim the ability of resurrection. This option is given when you fall to an enemy or boss. Bosses will be aware of the threat and ready to pounce on your weakened state immediately (Wolf comes back to life, but at limited health.). This makes your comeback much more difficult in this scenario. Normal enemies however can easily overlook this and revenge is well within reach.


Leaping off a rooftop with your katana drawn to finish off an unsuspecting enemy below with a fatal strike never gets old.

To no one’s surprise, you’ll be dying a lot in Sekiro. Die too many times in a row and the NPC’s will face the curse of Dragonrot. This prevents Wolf from beginning any side quests that are available through that specific NPC is presently cursed. It will also lower your chances of receiving Unseen Aid, which enables Wolf not to lose experience and Sen upon death.

Back at the temple, you’ll find Emma who can create a vaccine. She’ll need a sample from two infected NPC’s (find them and simply let them cough upon you). From this, Emma will craft the cure called Dragon Tear. Use this at a idol to effectively cure all who are plagued, restoring previously inaccessible side quests and raising your chances of receiving Unseen Aid after death.

The world in Sekiro is vast and features some beautifully detailed landscapes that are rich in Japan mythology. With no markers or map, it’s up to the players to discover each deadly area on their own. Each branching path has its own secrets and you’ll want to search thoroughly both high and low to ensure nothing is missed. Every area has deadly spots, but they also contain useful items and most importantly Sculptor idols where you can rest and save your progress.

Wolf has a grappling hook that supercharges your exploration ability. You’ll see an icon on where it can be used and it turns green when it’s accessible. It works amazingly well and will absolutely make you feel like a legit Shinobi as you zip around rooftop to rooftop. Your prosthetic arm can be of great help as well against certain enemies and bosses. During the campaign, you will come across numerous mechanical upgrades such as a Shuriken attachment for ranged attacks, a Flame Vent for inflicting burn damage and the Loaded Axe for breaching the guard of foes with a shield.

Leaping off a rooftop with your katana drawn to finish off an unsuspecting enemy below with a fatal strike never gets old. It’s highly reminiscent of the Tenchu series and feels incredibly satisfying in execution. The tension filled gameplay is immensely fluid in presentation and feel during combat, which truly makes this game shine.

Sekiro: Shadows Die Twice delivers a fresh and absolutely amazing experience. It has gameplay elements similar to Tenchu and a difficulty level steep as the Ninja Gaiden series. From Software has crafted yet another new IP that once again takes gamers to a thrilling new world ,where one must overcome seemingly impossible odds. The combat absolutely shines and forces players to adapt to a new play style that encourages both aggression and strategic swordplay. It’s simply one of the most intense and thrilling action adventure games to hit consoles this generation.

Carve your own clever path to vengeance in an all-new adventure from developer FromSoftware, creators of Bloodborne and the Dark Souls series. Take Revenge. Restore your honor. Kill Ingeniously.