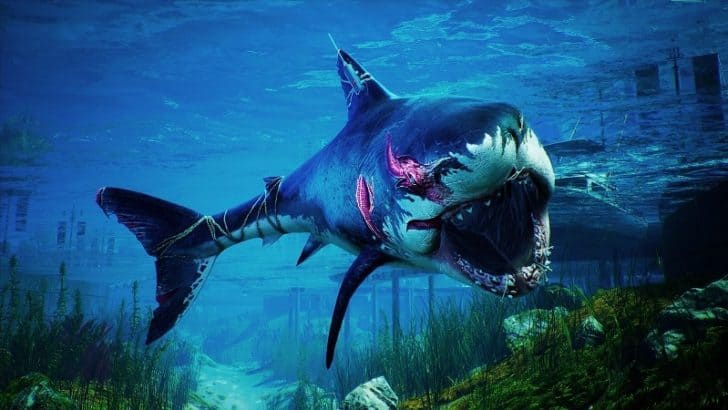 Maneater from Tripwire Interactive is one of the more unique Action RPG’s to release this year.  It places you in control of an infant bull shark, where you must learn how to survive, hunt and eventually grow into a giant beast that terrorizes the ocean waters and tourist occupied beaches. 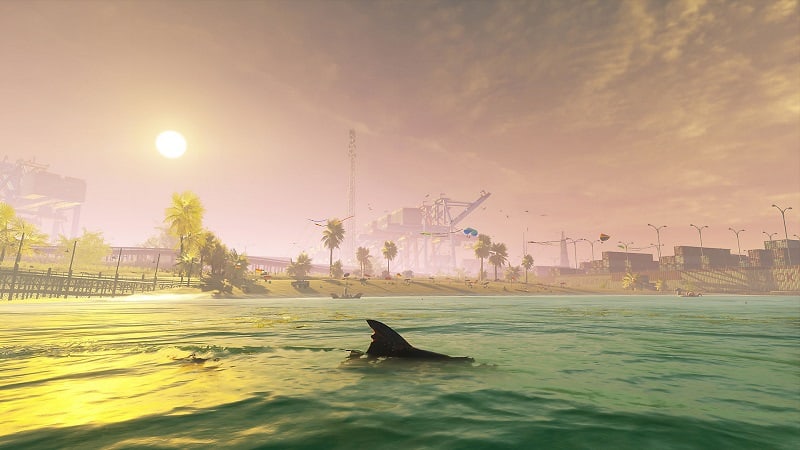 The game kicks off with you controlling a full grown blood thirsty bull shark.  You get a short tutorial on controls and then begin stalking and eating every human in sight within the water (or even on the shore if you act quickly).  The only thing missing here is tornados.  You learn how to breach the water (activated through the L2 trigger), which enables you to perform air born based attacks on boats and those occupying it.  You’ll need to quickly familiarize yourself with this skill once your kill count goes up high enough, because Cajun shark hunter Scaly Pete and his posse come out in full force to bring you in.  From the opening cinematic and music, you’ll quickly learn the devs wanted this to be a goofy good time, which it is!  Chris Parnell does a great job narrating your entire adventure, adding to the game’s excellent presentation.

Holding the R2 trigger will make your shark open its mouth, exposing all the razor sharp teeth within its jaws.  Repeatedly pushing this trigger allows you to chomp down on your prey.  R3 targets your enemies and the R1 trigger allows you to evade incoming attacks.  You can also whip your tail with L1 to smack your aggressor.  The camera system does take a little while to get use to, but once you dial in the controls, you are a force to be reckoned with.  We won’t spoil the intro here any further, but immediately following this escapade you begin the real part of the game as an infant bull shark. 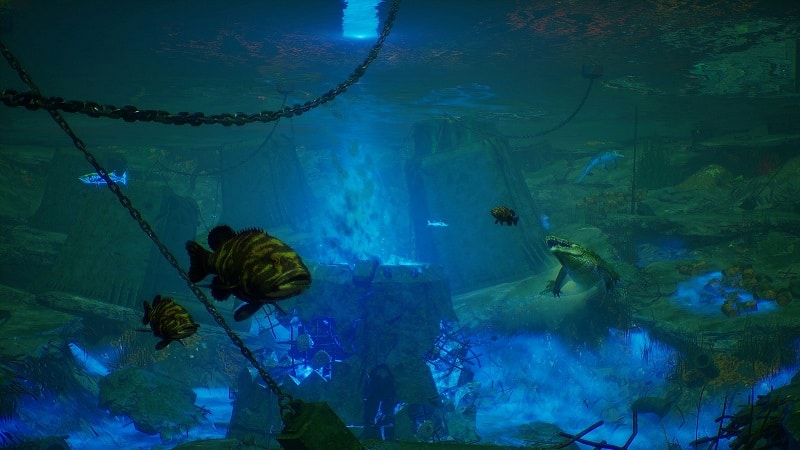 Now you must learn to survive as a little guy, hunting what you can take down and avoiding bigger predators such as alligators and orcas.  You’ll also have to avoid humans at this stage that would prefer you as a trophy on the wall, but your time of revenge will come soon enough.  It’s a tough road ahead, but a pretty incredible journey that will no doubt have you hooked.

Evolve to a Monster 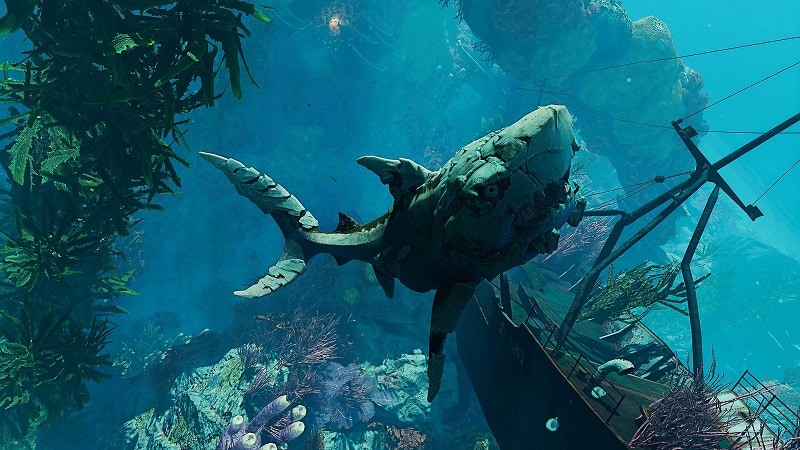 There are seven different regions within this open world of water where you will explore and slowly develop your bull shark into a true beast of terror.  The campaign is broken into different episodes, where once you have completed what is needed, you’ll then move onto a different body of water and surroundings such as Sapphire Bay, Caviar Key, Fawtick Bayou and Golden Shores.  This helps to keep the 10 hour experience fresh and engaging, as each area is quite different from the last.  The quests featured here, like any other open world game, can feel a bit repetitive after time, but the fun factor from being in control of a gnarly shark and seeing it grow stronger and more fierce with time never gets old.  There are plenty of collectibles to be found for completionists as well. 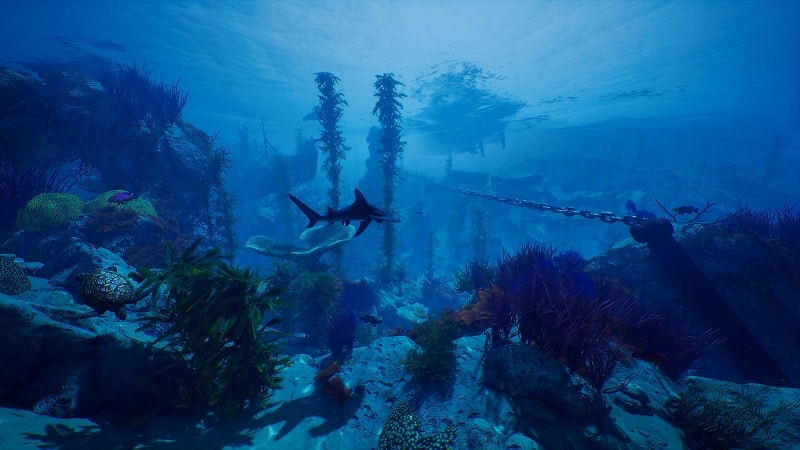 Stay active and eat everything around you to speed up the process of becoming a super shark.  You’ll slowly but surely grow in size and eventually be able to level up in several key areas.  This can come in two forms, either via gear or mutations.  You can choose which areas to focus on, such as your fin, teeth, tail or head for example.  Unlock wild upgrades that utilize electricity and poison; or go for all out power with the bone set.

The more you hunt and kill, the more attention you bring to yourself; luring out bounty hunters to bring you down.  You can take out the boats themselves with enough damage or lunge through the air and chomp down on these hunters in a more cinematic fashion.  You’ll eventually face off against Scaly Pete in an attempt to settle the score once and for all for the finale. 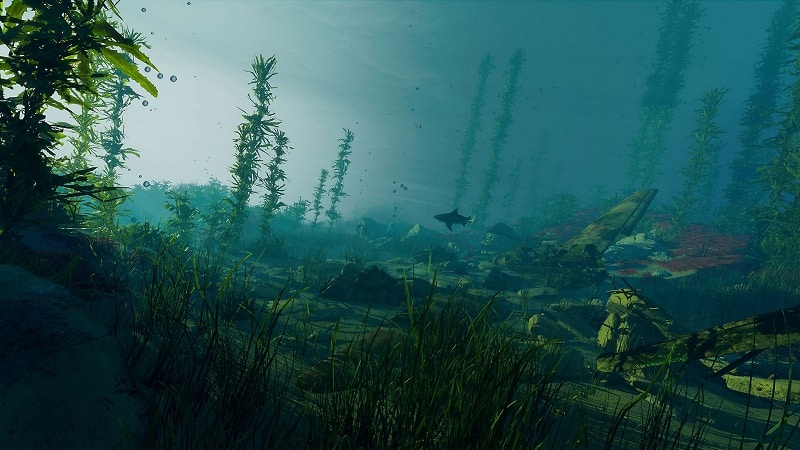 Maneater manages to provide a truly unique open world experience, where you are basically the star of Shark Week.  You’ll have to do some grinding to level up in order to become the nightmarish monster from the depths; but that experience is largely a ton of fun and a real treat for shark fans.  It’s something that the gaming world hasn’t seen and Tripwire Interactive has crafted something really cool here in the Action RPG genre.  It’s also only $40, making it a great deal for the captivating underwater adventure it delivers.