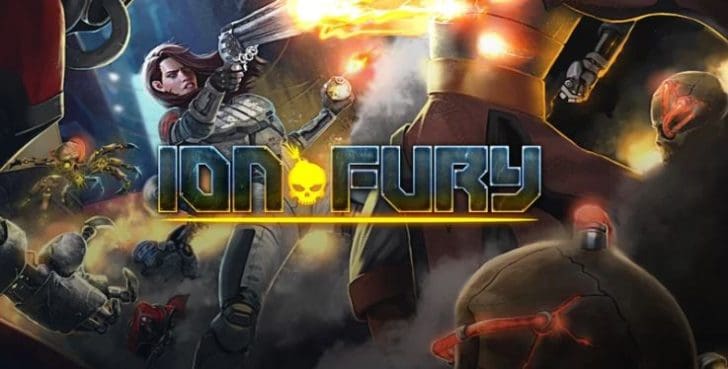 Lately there has a been a mad resurgence in remakes and games that mimic that of the 90’s game era. It was just last week when we reviewed Turok 2 and now 3D Realms has sent over Ion Fury…a wonderfully over the top first person corridor shooter that is powered by the Build engine. The very same graphics engine that unleashed Duke Nukem 3D. These are indeed exciting times.

Duke didn’t make it out for this outing and we have a new protagonist for this adventure. Shelly diffused bombs for a living (hence the nickname), but now she’s an outright hellraiser and anything that threatens her city will be blown to bits. She is always talking trash as she smokes the competition and we wouldn’t have it any other way. Your mission is to wipe out the cybernetic army created by Dr. Jadus Heskel. He’s solely responsible for the evil that is consuming the streets of DC. It’s time to blast some baddies.

It’s truly like stepping back in time when you fire up Ion Fury. The Build engine does a beautiful job of re-imagining this era in all its glory, while also going well above what it was initially capable of. The action is frantic and the speed that your character moves at is blinding compared to FPS’s today. I forgot just how quick the gameplay was in these old-school corridor shooters.

Shelly sprints through each area at a feverish pace, while mowing down every creature and thug in fantastic gory fashion. The developers at Voidpoint have managed to implement a few modern gameplay tweaks, such enabling the ability for headshots. This makes clearing out tightly packed rooms full of enemies much easier. You’ll need to strategize your assaults, as this isn’t a walk in the park. If you get overwhelmed, you’ll quickly be out of health or worse ammo. Pick your shots and explore every area for more ammunition and armor.

Constant movement and strafing is key to survival…that and lots of firepower. You’ll start off with a punchy revolver, but quickly move up to more serious hardware. This includes the Electrifryer, Loverboy, Disperser, Penetrator, Chaingun, Bowling Bomb, Ion Bow and Clusterpuck. Each weapon sports an inappropriate name, that fits perfectly with the game’s humor. Duke would be proud.

The enemy roster is just as you would expect. Prepare to be chased by cybernetic thugs, spiders, drones, mechanical centipedes and much more. The boss fights are fantastic too, where gamers will face off against an angry Mech, the Brutalizer Twins and eventually Heskel himself.

You are going to need more than lots of grenades, Chainguns and Bowling Bombs to make it through each stage and boss fight. To no surprise, you’ll need to memorize attack patterns and openings. Here you will learn when to take cover and when it’s safe to unload on them. Plus you’ll need to experiment with your weapon load out and see what works best against each boss and enemy. Many of the guns have secondary actions that can be of great use when you are in a jam. Most importantly, they all have a great feel to them and are a riot to use.

3D Realms and Voidpoint have reignited the corridor shooter genre with the release of Ion Fury. The blazingly fast gameplay and gorgeous pixelated graphics produced from the original Build engine is pure brilliance. It showcases what made Quake and Duke Nukem absolute icons in the 90s. It’s ridiculously fun and a huge nostalgic trip.

3D Realms, creators of Duke Nukem 3D, Prey, and Max Payne, are excited to team up with Voidpoint to bring back the legendary Build Engine, famously known for classic first-person shooters like Duke Nukem 3D, Shadow Warrior, and Blood. Ion Fury is the real deal!