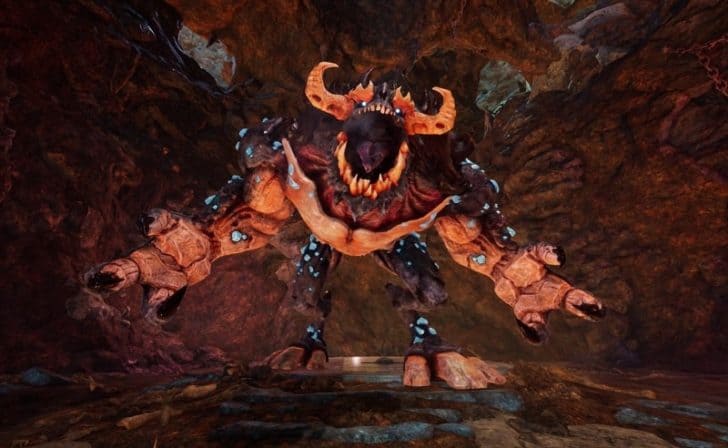 Saibot Studios and Nimble Giant has released their take on the blistering fast pace shooters that took the world by storm in the 90s’.  Hellbound is now out on Steam and it’s time to lock and load for a serious gorefest. 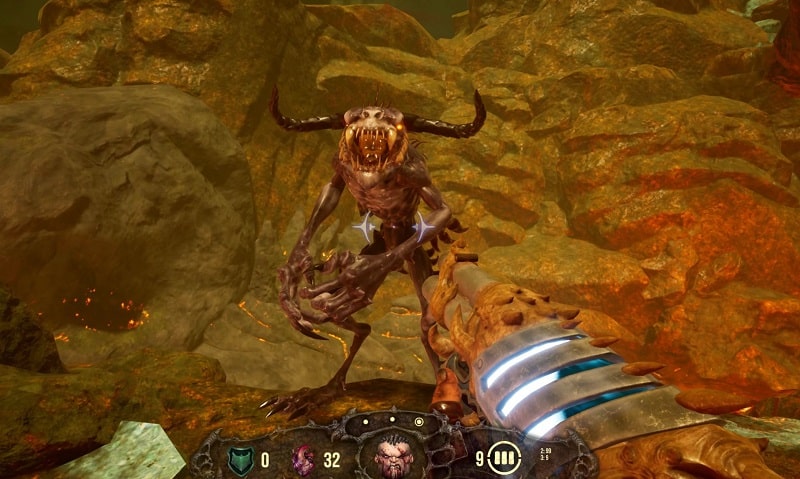 Gamers take the role of Hellgore, the last of his race seeking revenge at any cost.  He instantly fits right in with this genre, firing off quick grumbly remarks, usually explicit packed quotes regarding a bloody payback.  The team no doubt enjoyed a few games of Duke Nukem back in the day.  The controls feel pretty much perfect across my Roccat gaming mouse and keyboard.  Hellgore moves with impressive speed and covers ground in quick order.  I was surprised to find an additional sprint key, which is required for rocketing across long perilous jumps and molten lava.  Our protagonist here has the standard weapon lineup for wiping out the army of creatures standing in your way.  This includes an assault rifle, triple shotgun, rocket launcher, spiked club and chain gun.  While ammo is plentiful, if you do happen to run out, you can engage in some bare knuckle brawling when the time comes.  Keeping your distance, while constantly moving and strafing is the key to survival.  Enemies fall to your feet after the spray of hot lead or explode in an over the top, bloody mess that never gets old.  They will however end you shockingly quick if you get cornered or fail to dodge enemy shotgun fire. 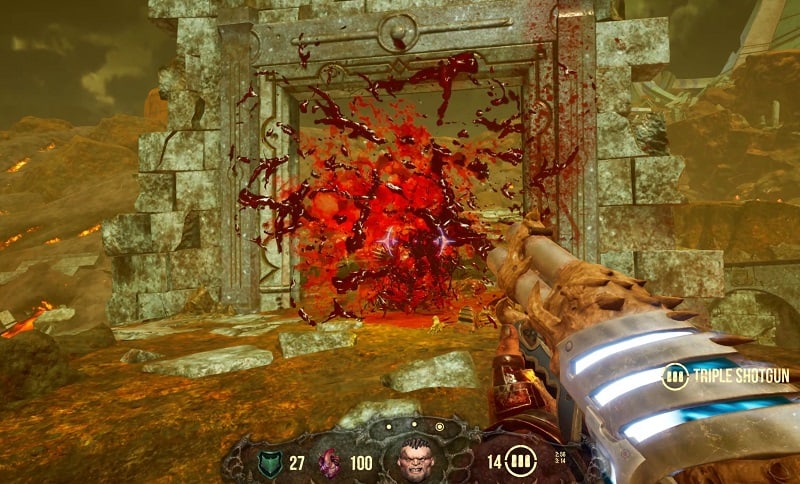 The campaign is comprised of 7 levels including: The Resistance, The Heroes’ Cemetery, Unholy Lands, Dead Forest, City of Fury, Endless Hive, and The Core (guarded by Ferlord).  The stage creations are excellent, providing strong vibes of Doom and Quake.  It’s a mix of open environments and corridors filled to the brim with demonic beasts.  I particularity enjoyed the red vibrant planets in the distance, combined with the lightning and mount doom like atmosphere found in each level. 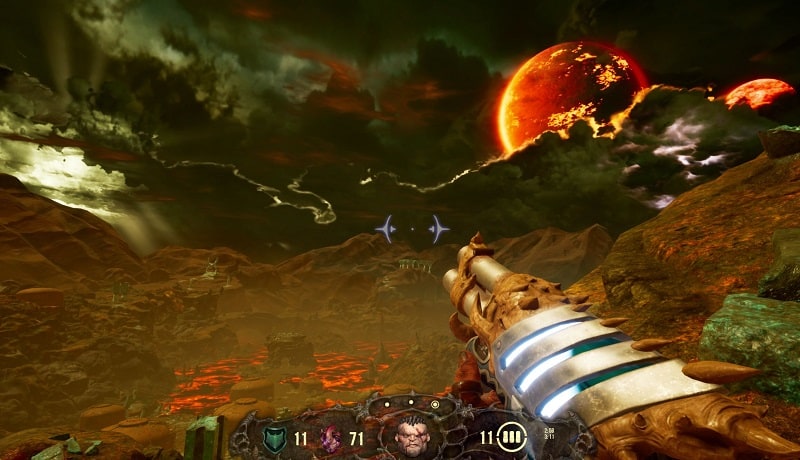 Within each area, you are tasked with finding keys to progress that are color coded to correspond with the locked doors.  Hidden doors are found throughout as well, so keep an eye out for any wall areas that seem suspect.  Hearts and armor are found throughout, which are vital for topping off after each heated skirmish.  You’ll be surprised how much damage is taken with just a few direct hits or if taken by surprise (which will likely prompt the Game Over screen).  The warning at the beginning of the game is legit in regards to difficulty.  The intense action is also backed by an absolutely ripping soundtrack, full of metal tracks composed by: David Levill, Federico Ágreda “Zardonic” and Christian Fernando Perucchi. 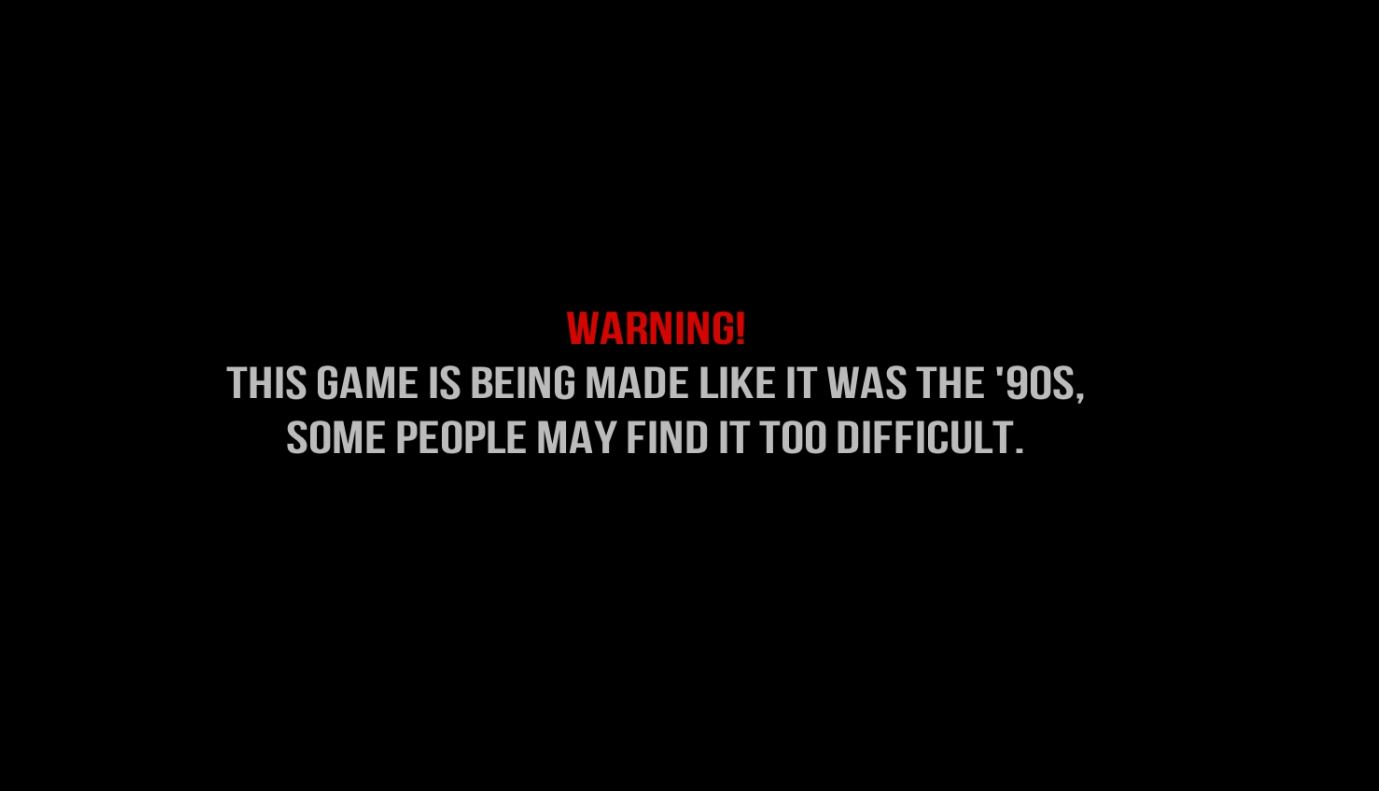 Once you beat the campaign, you unlock Survival Mode.  Here you face waves of enemies until you are overtaken.  There is a countdown before each incoming assault, giving you time to collect ammo and supplies before the next skirmish.  There are four stages to choose from within this mode that include: Unholy Dust, Dead Castle, Fury Road and The Refuge.  Each one is quite fun and will absolutely test your might against the demon horde.  See where you rank, after some practice among the online leaderboards.

Hellbound from Saibot Studios and Nimble Giant is a thunderous ride that takes players back to the days of classic Doom and Quake from the 90s’.  The devs have taken those iconic FPS formulas and injected them with modern visuals for this release.  Its blistering fast gameplay looks phenomenal at 1440P and the metal soundtrack composed for this title is a perfect match for the chaos found on screen.  My only complaints here are the lack of multiplayer, such as Team Deathmatch (which would be an absolute riot) and I would have also loved a longer campaign, plus more bosses.  The overall package here though is undeniable in its polish and execution.  I loved every minute of it and simply wanted more after the credits rolled; which is always a good sign.  Here’s hoping for future DLC!

As of publishing this review, it is presently on sale at Steam for $11.99, making it a must-buy for any fans of fast gory first person shooters.  This would no doubt come Nukem approved and we certainly highly recommend it.