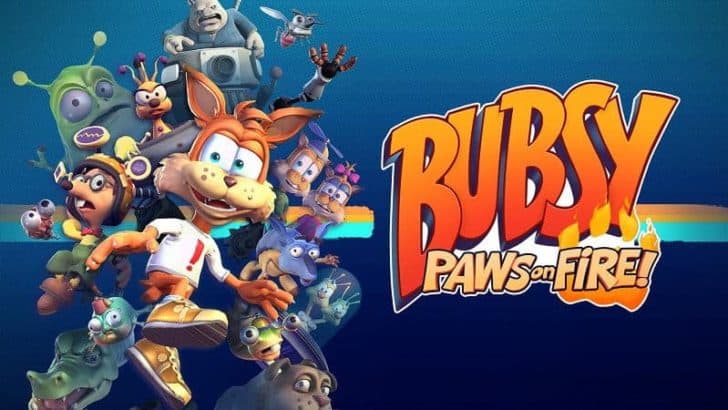 Bubsy first hit the gaming scene back in 1993 on the Super Nintendo. The mischievous bobcat was even awarded “Most Hype for a Character” and “Best New Character” by gaming outlets. Competition however was quite steep, going against the likes of both gaming juggernauts Sonic and Mario. Over 25 years later, this feline is looking to make a comeback.

From Platformer to Runner

Choice Provisions decided to take the gameplay for Bubsy: Paws on Fire in a different direction for this latest release. I was expecting a platforming adventure, but instead discovered this was a runner. Bubsy and friends (Virgil and Woolie) are presented in classic 2D fashion and have to make it through each stage and to the finish line.

Bubsy automatically runs forward at a feverish pace. Players are in charge of jumping, dodging and pouncing their way through enemies and obstacles. Each character has their own unique moves (such as double jumping or dash-attacks), that makes their experience on each level fresh; while also presenting new challenges to tackle and overcome. Woolie even has a spaceship, so SHMUP fans will especially enjoy these segments.

You must collect coins to open up additional stages. These coins are split into three pieces across each stage. It’s very easy to miss one if you don’t stay focused. Collecting all three pieces with each character will unlock Challenge mode. This allows gamers to play as Arnold. These stages mixe things up by having the camera following right behind him as you run forward through a tubular tunnel, while collecting items and dodging obstacles once again till reaching the end.

While I was personally looking forward to a classic platformer for Bubsy’s latest venture on the PS4, the decision to make Paws on Fire a runner by the devs works really rather well. There are challenging areas, but nothing too difficult in place. The variety of characters and excellent design found in each stage, make this runner really stand out. Can’t say I am too surprised, as this is the same talented team behind the popular BIT.TRIP series.

The graphics are bright and colorful, offering a cheerful presentation that is a great fit for the game. Each stage is nicely detailed, featuring saw blades, pits and TNT boxes to keep players on their toes (or paws). There is quite a bit of content here, that adds up to over 100 levels that span across three different worlds. There is also a online shop where you can use the currency earned from completing each level to give Bubsy a new look. A welcome addition, especially since there are zero micro-transactions present here.

Bubsy: Paws on Fire has diverted from the typical platformer path of previous entries and successfully placed the feisty Bobcat and company into a runner that performs well, looks great and has just enough content to make this a must have for fans at $24.99.

From the developers of the BIT.TRIP series comes Bubsy: Paws on Fire!, the latest and greatest in bobcat-based gaming. (Review Copy provided by Accolade)