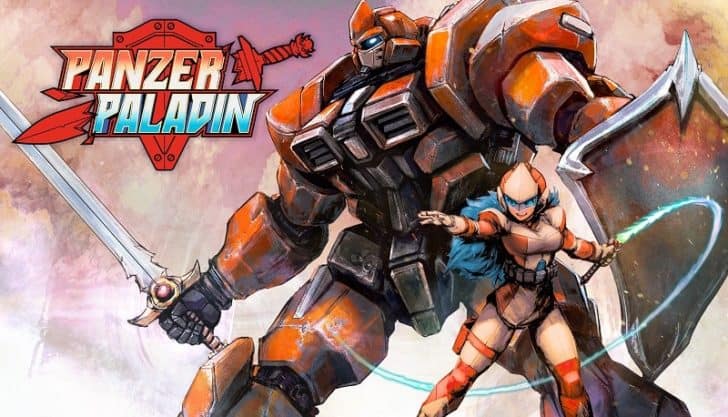 Tribute Games has released a retro action-platformer that features a powerful mech, swords and a highly capable android pilot that can personally press forward and complete the objective if called upon.  It’s time to suit up and save humanity! 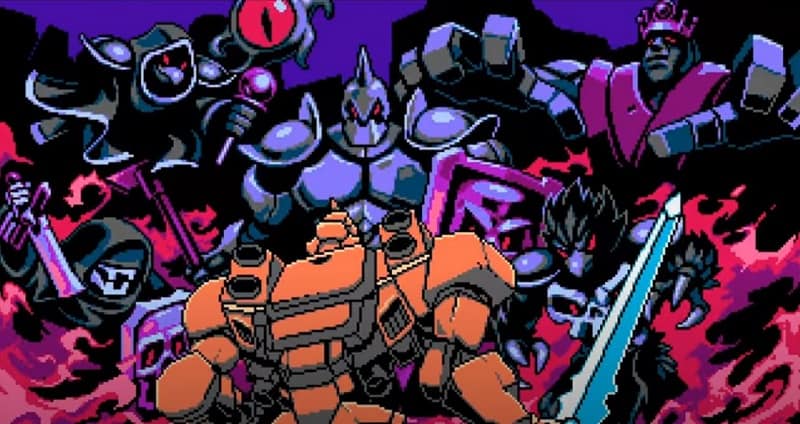 Panzer Paladin has incorporated gameplay elements from some of the all time NES greats.  You’ll see sprinkles of Mega Man, Blaster Master and Castlevania throughout the 17 levels packed in this adventure (11 main missions, plus 6 extra areas leading up to the Final Boss Fight).  Players can select the order in how they tackle each mission and boss, which was often seen in the 8 and 16-bit eras.  The graphics, colors, animations and effects are just brilliant.  It’s a gorgeous game with phenomenal pixel art found throughout each area. 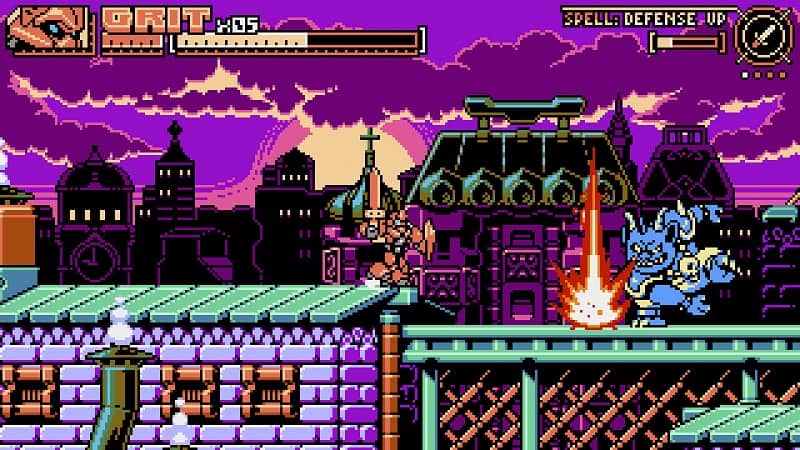 The plot revolves around mysterious projectiles that have been spotted falling to earth.  Closer inspection reveal these are actually weapons.  Upon impact, this unleashes an army of demons within each location.  Mere humans cannot wield these tools of destruction, as it corrupts their very soul.  The ISC (International Security Council) recruits their best mech (Grit) and android pilot (Flame) for this tall task.  Grit and Flame act as one highly efficient mechanized weapon that are determined to exterminate the demon spawn and their attempted takeover. 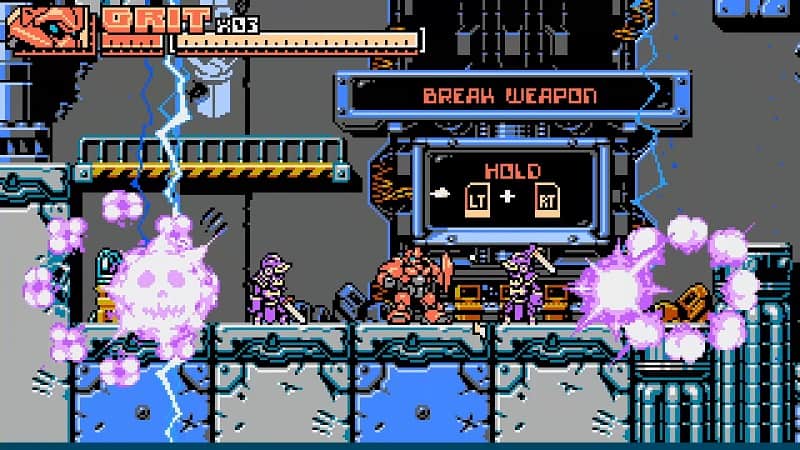 While at the core of Panzer Paladin is an action-platformer, it actually packs far more depth into this genre with its sword swinging gameplay.  While pros of the game have already displayed the ability to simply punch their way through each level and boss encounter, you’ll want to take advantage of all the awesome weapons located in each stage.  There are many different swords, axes and spears to choose from for your weapon of choice.

Each one features a durability stat, very similar to Breath of the Wild.  You’ll have to keep an eye on this and switch up when necessary.  Before it breaks, hurl the weapon towards an enemy or boss for an added damage bonus.  Each blade also has a spell capability that is activated through shattering it.  This includes healing, deflection, lightning and more.  Save your best for the boss fights! 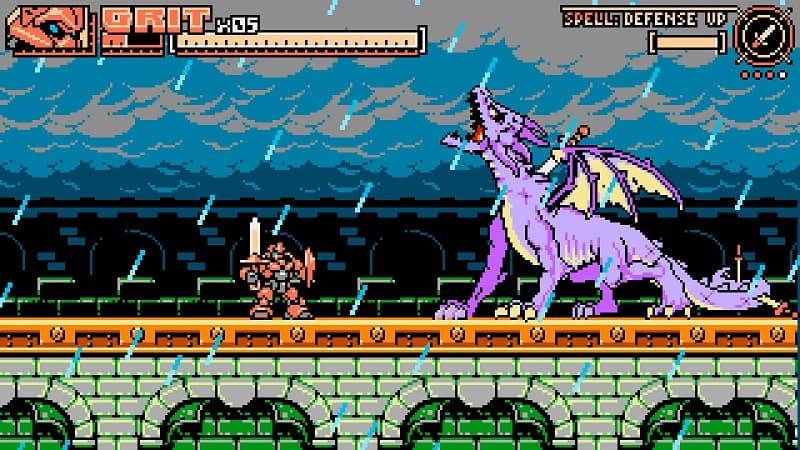 Grit is highly versatile, being able to jump high with an upward thrust attack (which is also good for clearing a large jump itself).  A back dash move gets you out of harms way quickly and also gives you a small moment of invincibility, as you ghost backwards in a cool blue blur effect.  One of the most unique mechanics in place is the ability for Flame to eject from her pilot’s seat and tackle the enemies and levels herself head on.  Certain areas can only be reached by her, which often contain a station for regaining some health back.  Flame will automatically leap from the armored mech if too much damage is sustained.  She uses a whip as her weapon and it can be quite effective in taking out your opposition.  After enough practice, bosses can even be finished with her alone for the highly determined.

The checkpoints are spread far apart and the bosses can be quite challenging at first; making this NES tough on the right difficulty level.  I lost most lives from just missing a jump (don’t forget to use the upward strike for reaching greater heights when leaping) or from being ill equipped for a boss encounter.  Use your weapons, spells, buffs and back dash wisely to advance with minor setbacks. 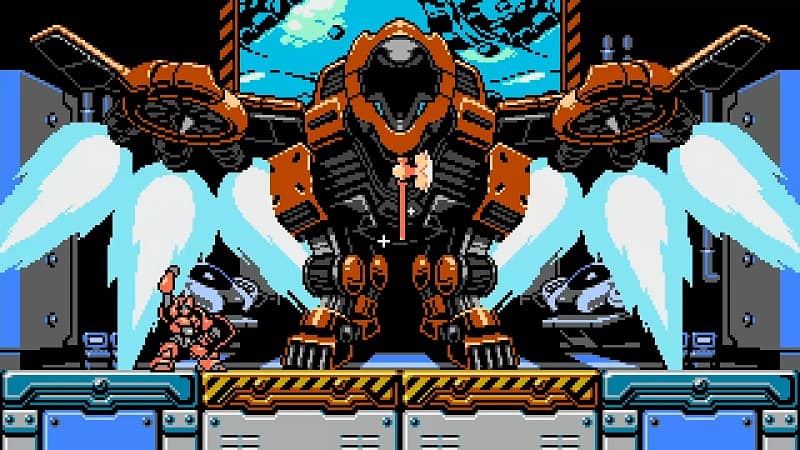 Panzer Paladin from Tribute Games delivers a genuine retro experience, bringing players back to the 8-bit era of physical carts and gorgeous pixelated platforming from the 90s.  At the same time, it introduces fresh, unique combat mechanics into the mix; alongside an armored mech, a fearless android pilot and incredible soundtrack to jam to during your journey.  The boss fights are challenging and provide some thrilling moments that will test your skills and reflexes.  It’s a delightful package overall that is immensely polished and the perfect summer title for anyone that enjoys 2D action platformers.