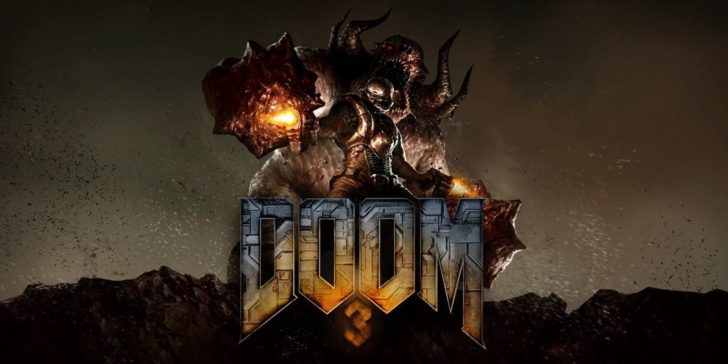 If you rewind back to 2004, I was busy building my very first gaming PC. It was a massive tower, with large blue LED fans and Nvidia’s latest monster GPU, the GeForce 6800 Ultra. It took a long time to save up for this beast, but it was all in anticipation for Doom 3 and it was worth every penny. 15 years later and I’m once again reliving this fantastic title, but incredibly on a portable system. Isn’t the advancement of technology great?

Doom 3 not only introduced ground breaking visuals and effects, but also delivered one of the finest horror based shooters of its era. Hell has literally opened up and unleashed its demons on Mars. You must somehow figure out how to survive the monster filled space station and get out. It’s yet another beautiful port from Panic Button. These guys really have a strong grasp on the Nintendo Switch hardware. It performs extremely well and the controls feel excellent, even when solely using the attached Joy-Cons. As usual though, its best played with the Pro Controller if you happen to have one.

The atmosphere is incredibly dark and for its time, the lighting effects were unmatched. While you have a flashlight to peek into the dark corners, it’s limited in how long it can stay on. This helps to add even further dread and tension as you cautiously investigate each bloody corridor and area with an itchy trigger finger.

This latest port also sports the duct tape mod, allowing players to use the flashlight while also holding up a firearm. There are also options for FOV, Aim Assist, Flashlight Shadows and Auto Reload. The game autosaves for you, but players can also pause and save at any point (which is always welcome). Depending on the difficulty selected, it can still be a very challenging game. Regardless of what you choose, the horror factor is still immensely strong and has truly proven to stand the test of time. Players also receive Resurrection of Evil and The Lost Missions expansion packs in this release. For $9.99, this is a crazy value and excellent choice for fans of this epic franchise.

When first released, players were required to sign in and/or create a Bethesda.net account before they could fire up the game. This was an unusual and puzzling move, especially for a system that would be played on the go. Thankfully the team at Bethesda took the criticism to heart and made it right in quick order. That login has now been made optional.

id Software paved the way for first person shooters with Wolfenstein 3D and later created a far more terrifying experience with the release of Doom. The third game was built using a cutting edge graphics engine and ingenious lighting techniques that required serious PC hardware behind it to produce the experience it was capable of delivering. It was wonderful to revisit the horrors of Doom 3 and on a handheld system at that. What a great way to celebrate Doom’s 25th anniversary.

Celebrate DOOM's 25th anniversary with the release of DOOM 3, available for the first time on Nintendo consoles.