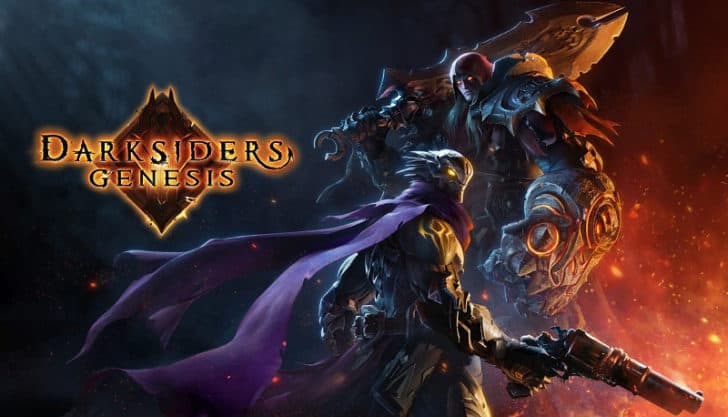 Darksiders Genesis is a prequel to the first game and features a new perspective, two protagonists and even co-op for this outing.  Players take the role of Strife and War in this exciting new action packed chapter, starring our favorite Horsemen doing what they do best.

A new take on a winning formula 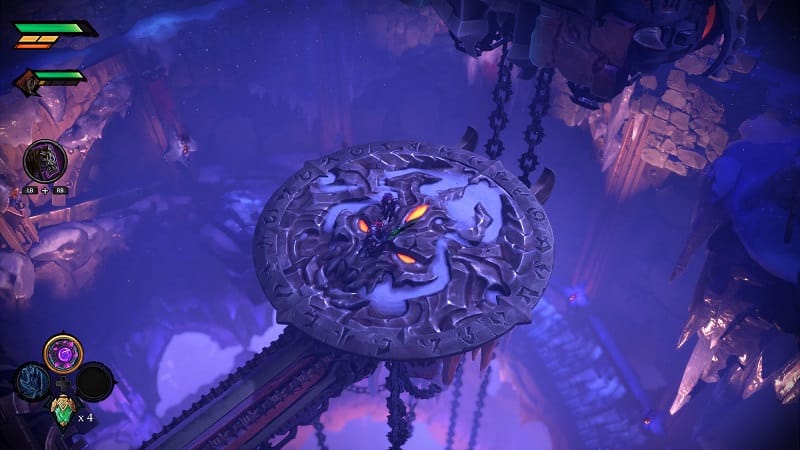 Darksiders has gained quite the cult following over the years.  With each new entry, the series continue to evolve and add in new gameplay elements.  Genesis is no exception and the devs at Airship Syndicate (that contain members of the Vigil Games team that created the first two games) really implemented some bold and impressive changes for this prequel.  The action all takes place within a top-down view, giving it a Diablo-like presentation and feel, but with a distinct emphasis on high octane action that the franchise is known for.  Despite the new look, it still remains at heart an explosive Action-RPG; carrying with it that unmistakably Darksiders tone and signature gameplay.

The demon lord himself has given exceptional powers to those willing to serve in his cause and now it’s up to Strife and War to hunt down and destroy these demon masters.  As you progress, you’ll uncover more of Lucifer’s plans and devious intentions that threatens the balance within the underworld and the very existence of all creation.  You’ll have to journey deep into the pits of Hell to in order to carry out your orders and complete the mission successfully. 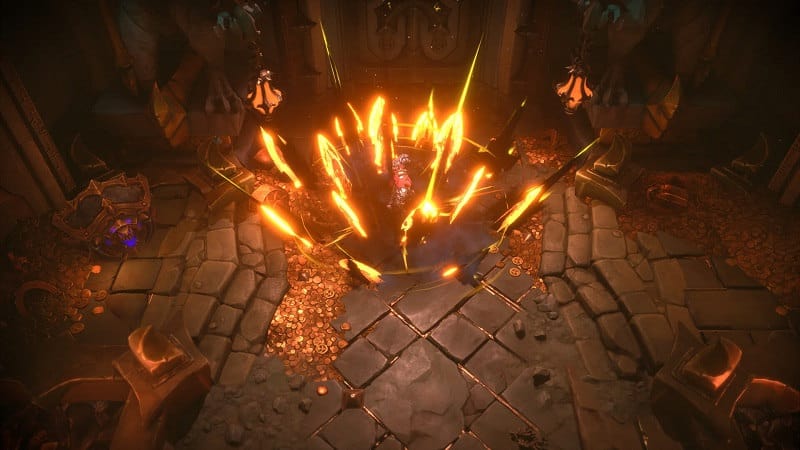 The action in Genesis is fluid and extremely satisfying.  You can switch between Strife or War at any point.  This can be used strategically as each horsemen has their own unique strengths and abilities.  Strife has the advantage with ranged weaponry, while War can block and parry enemies in close quarter combat.  With every villainous creature eliminated, you will earn yellow orbs that will eventually fill your Wrath Bar.  Once full, you can unleash different specials that are mapped through the LB button + X, Y or B.  You’ll start your venture with just one special attack, but others will be unlocked as you progress through the campaign.

Shooting incoming enemies while using Strife is very effective and once in close you can then hack-and-slash the beasts back to ash.  Strife will gain different ammo variants throughout each level and you can switch between these by holding LB and scrolling through them with the right analog stick. War earns enhancements as well but they come simply in the form of new based melee attacks.

Leveling up is accomplished through Creature Cores that are spread across Health, Wrath and Attack stats.  The more cores collected will in turn level you up (Maximum of 3).  Orbs are dropped by enemies and bosses.  It’s a little different in nature, as you will need to revisit certain areas according to which orbs you want collect and which specific attributes you want to strengthen.  There are also slots to line up appropriately with these orbs in the skill tree and bonuses given with certain combinations.

You’ll eventually unlock Arena Mode.  Here you are faced with hordes of enemies that come in waves until all enemies are eliminated.  This is excellent for collecting orbs and provides a different approach for leveling up that helps keep the action and experience fresh.

Each area is full of hidden items, treasure boxes and loot that is waiting to be discovered.  Exploration is encouraged across all 16 chapters and thankfully it comes naturally with this gameplay as it’s a ton of fun to scour the lands and inspect every last corner for goodies.  You’ll traversing lots of ground here and your trustee ghost horse can be mounted for covering ground quickly by simply pressing LB + RB.

You’ll face vertical challenges as well and be utilizing Gear items such as the Ghost hook to cross over treacherous cliffs and dizzying heights.  Many areas require special gear for access, which you will unlock as you progress.  The directional pad will allow you to access the different gear that is available.

Genesis includes a series first, cooperative gameplay!  Simply find a summoning stone, which will open up and glow purple when in close proximity.  Press the interact button and then select which friend you wish to invite to your game.  From the main menu, you can also select co-op party and start the game right off the bat with a teammate.

Graphically the game is quite gorgeous on the PC.  We played on Ultra settings at 4K.  With an Intel i9, EVGA GTX 2080 Super XC Ultra and 32GB of RAM, performance was outstanding.  The game is highly scalable as well, with the required specs being an i7, 8GB of RAM and a GTX 1060.  For us the game was extremely fluid and smooth, regardless of how much mayhem and destruction was displayed on screen.  I loved the overall art direction, use of vivid colors, sketched cut scenes and eye catching effects found throughout each chapter of the campaign.  The open dialog between Strife and War is comedic and well implemented too. 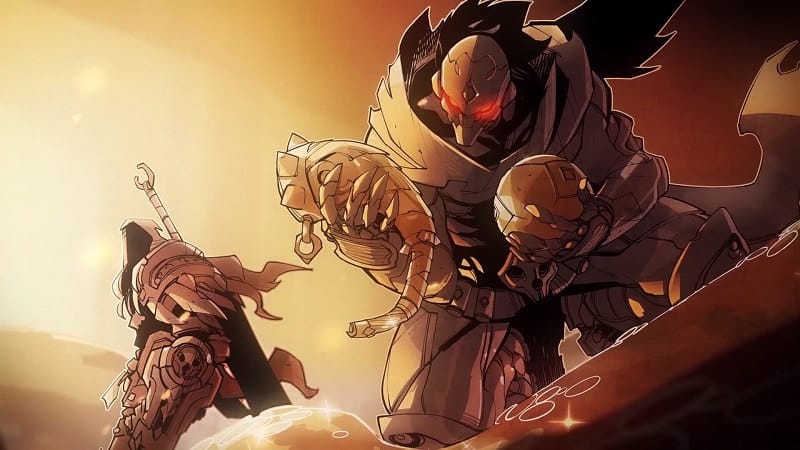 Darksiders Genesis proves to be a real contender in the top-down dungeon crawler genre, while still managing to keep to its Action RPG roots.  Strife and War prove to be an entertaining duo and each can be played at any point across all 16 chapters, opening the door to some clever combat mechanics and strategy.  Airship Syndicate has delivered a phenomenally polished prequel for fans of the franchise that plays brilliantly from start to finish.

The new co-op option is hopefully here to stay, as it was a blast charging into demon territory alongside a friend.  The new spin taken here for this beloved series was certainly a gamble, but one that seriously paid off.  I’d love to see them expand more on Strife and hopefully some future DLC is already in the works to keep this party going strong.