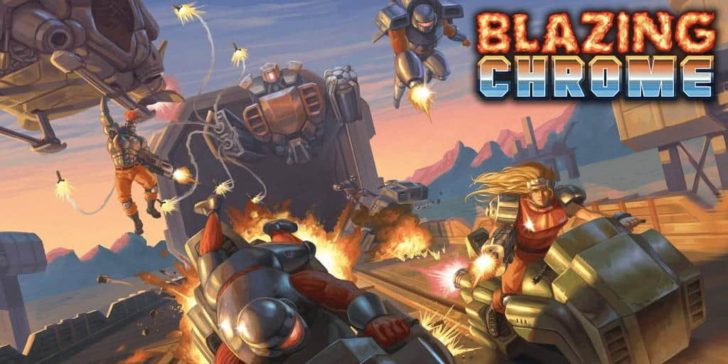 It’s 2019 and we are stepping back into the 90’s courtesy of JoyMasher. They have developed an insanely good 2D shooter that is as close to a spiritual successor to Contra as we will ever likely get.

Blazing Chrome is about humanity fighting against machines that have made it their top priority to exterminate mankind. It’s time to arm up and short circuit these creeps. Gamers can pick between a hardcore resistance soldier or ironically a befriended robot.

The game kicks off with an epic cutscene, featuring some glorious 16-bit pixels and effects that fire up some serious nostalgia right off the bat. Once the first level loads, the carnage immediately goes full throttle. Enemies swarm from both sides, up above you and there are many that can fly as well. Everything explodes with incredible detail and it’s all beautifully over the top.

Each level is comprised of multiple sections. This is nice, as it allows you to start at the beginning of each section when you ultimately reach the “Game Over” screen. The boss battles are insane spectacles to witness, where most will dominate a large portion of the screen, demanding your full attention and respect. Each mechanical monster has multiple phases and blowing them to kingdom come delivers a fantastic feeling of accomplishment.

Blazing Chrome was designed to push players to the absolute edge. It requires laser focused concentration, lightning quick reactions and most importantly the drive to outright refuse defeat. You will die a lot. Get used to seeing the Game Over screen. With a solid effort though, you’ll find yourself getting further with every attempt, as you’ll begin to perfect each section. It mainly comes down to three factors. You’ll have to memorize enemy attacks, level design and the best weapons/powerups for each area of the game.

You’ll play across 5 different environments that also include motorbike and jetpack action sequences. You can tackle any of the 4 levels in the order you prefer. They are labeled in difficulty, allowing you take on the easiest missions first. Once these are completed, the fifth and final level will be accessible. after you beat the game, you’ll unlock mirror mode and boss rush; plus gain access to new playable characters.

Blazing Chrome is a thrilling 2D shooter that was made specifically for those that are passionate about the 16-bit era and Contra series from the 1990’s. JoyMasher takes the crown here in delivering one of the finest and most entertaining retro inspired games of 2019. Every boss battle, explosion and firefight is bursting with immense detail and absolutely gorgeous pixel art that is simply unmatched.