The Ninja Saviors: Return of the Warriors Review (Nintendo Switch) 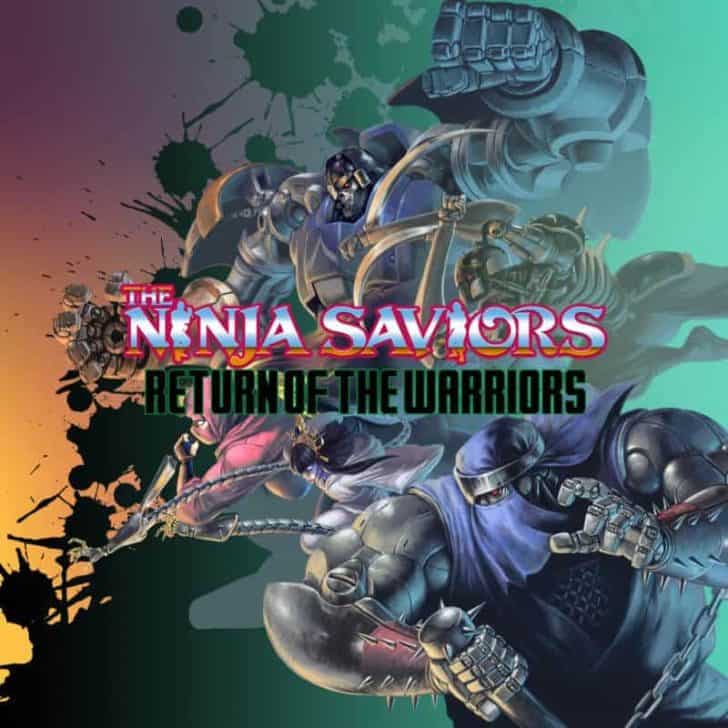 The origin for this title goes all the way back to the arcades in 1987.  It was produced by Taito and later ported to several highly popular game systems including the Commodore 64 and TurboGrafx-16.  In 1994, a new version hit the market on the Super Famicom titled “The Ninja Warriors Again”.  Over two decades later, we are now seeing the latest entry known as “The Ninja Saviors: Return of the Warriors” thanks to developer NatsumeAtari and publisher ININ Games.  The old saying definitely rings true here, in that the third time is the charm.  Bear in mind that the original was one of the hottest beat ’em ups at the arcades during its time and an all time classic…that’s just how good this latest one is on the Nintendo Switch. 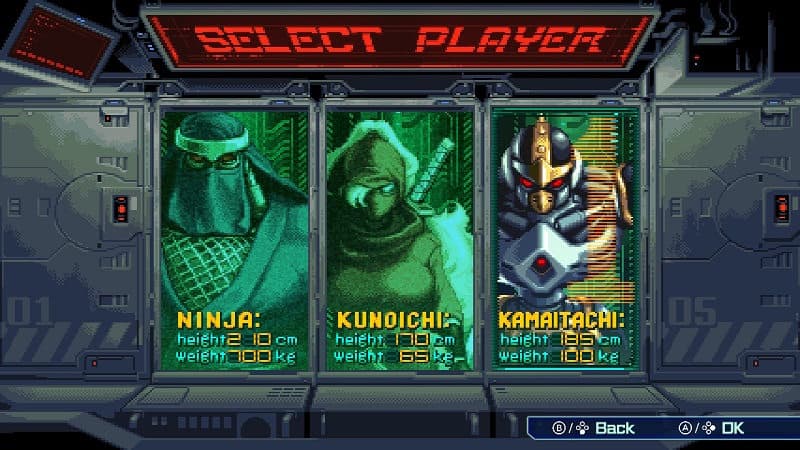 The world is at the brink of collapse and you are part of a small robotic team destined to save it.  This A-team is comprised of three cyborg ninjas including: Ninja (Large, powerful but slow), Kunoichi (Most equally balanced) and Kamaitachi (The fastest and most agile cyborg of the bunch).  Each posses their own unique moves and distinct strengths.  You can’t go wrong with any of them, but you’ll no doubt find one that best suits your play style. 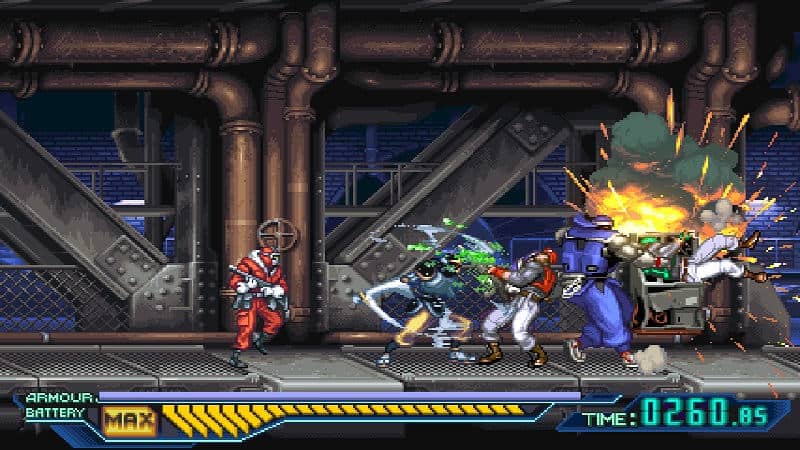 I found all three highly capable, but enjoyed using the Shredder like Ninja character the most.  His savage side kicks, slams, nunchucks and power made him my absolute favorite.  Objects can be thrown and Ninja (AKA Shredder) picks them up and hurls them towards enemies at speeds the other two players simply can’t.  He’s no doubt the tank build if you will for this lineup and incredibly fun to use.  No spoilers here, but you will also unlock two additional characters upon beating the game. 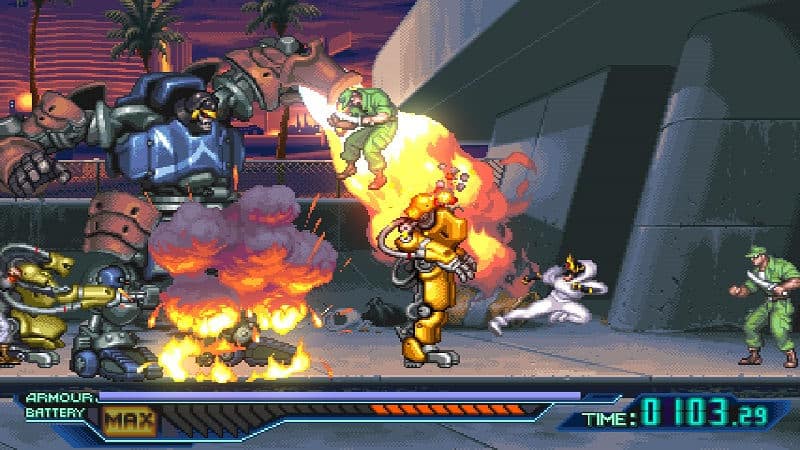 Get ready for some insanely good side-scrolling brawling.  This is such a good throwback to what made this genre a absolute force to be reckoned with at every arcade back in the late 80s and early 90s.  It’s just plain fun.  Within seconds of playing, you will be crushing enemies left and right.  The action is smooth, popping with gorgeous 16-bit style pixels, vibrant colors and silky smooth animation that in turn delivers phenomenal gameplay.  The action is contained to a single plane, which allows you to move forward or backwards, but not up or down.  This allows the chaos to be directed with intense and specific focus.  This aspect is certainly a big part of what makes The Ninja Saviors: Return of the Warriors so entertaining.  Old school synthesized beats keep you pumped to continue fighting until you beat each stage and boss encounter to successfully make it to the next level.  The game is presented across 7 levels, which after all are beat unlocks the “Final” stage. 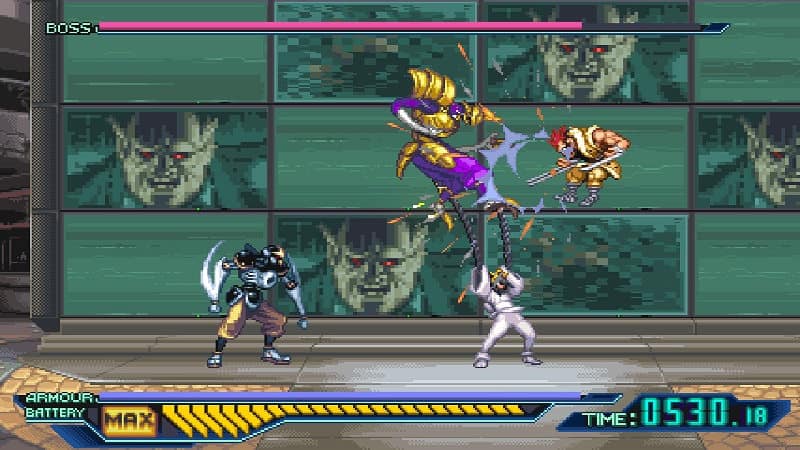 Game modes include Single Player (Normal), Hard (has to be unlocked) and a multiplayer mode for Time Attacks for stages 1-7, plus Final.  There are also Online Rankings for Single Player Normal, Hard and Time Attacks.  Needless to say, we haven’t yet been graced with a top ten placing here yet.  All in due time right?

There are several options available to you such as Display Settings for Aspect Ration, Aspect Scale, Scan Line Effect and Effect Color (apparently adds red to certain animations).  Players can also tweak around with controller settings, audio settings and language settings that include English, Japanese, Korean and Chinese.

Did we mention you get one life?  Even on Normal mode, you’ll need to make each hit count and keep moving.  Learning your characters specials and strengths are of course key to surviving each stage.  Practice makes perfect and while we absolutely saw the imminent Game Over screen, it was perhaps less than you might imagine with only one life to spare.

“The game is tough, but skillfully developed to be fair and never enforces its difficultly by implementing being cheap hits, enemies or bosses.  This is Beat ’em up done right.”

This version even includes a must for this genre, which is of course two player co-op.  One gamer can concentrate on destroying all the baddies in the back while the other player decimates everything on the front line.  During boss battles it’s an all out slugest.  The fun factor here is off the charts. 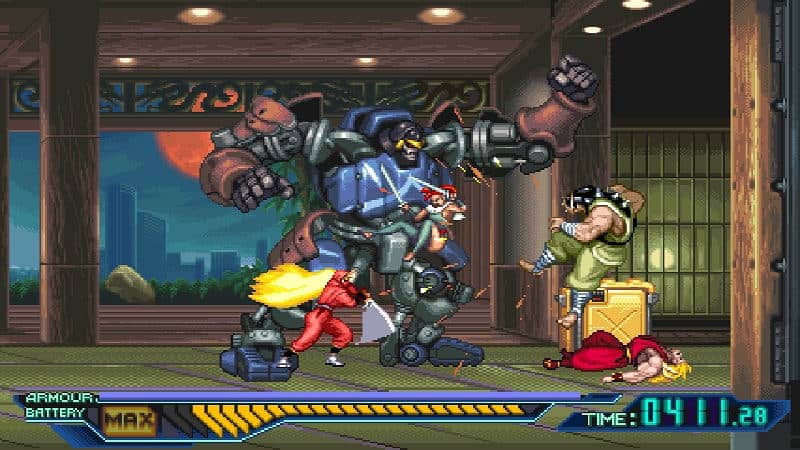 The Ninja Saviors: Return of the Warriors is a showcase of the best Beat ’em up action from the glorious late 80s and early 90s arcade era. The stunning presentation, the rock solid controls, the authentic vibrant pixel art and synthesized soundtrack; it’s all a brilliant execution of what made every kid spend every last quarter and token they had to get just one step closer to that final boss.  Bravo NatsumeAtari…bravo.