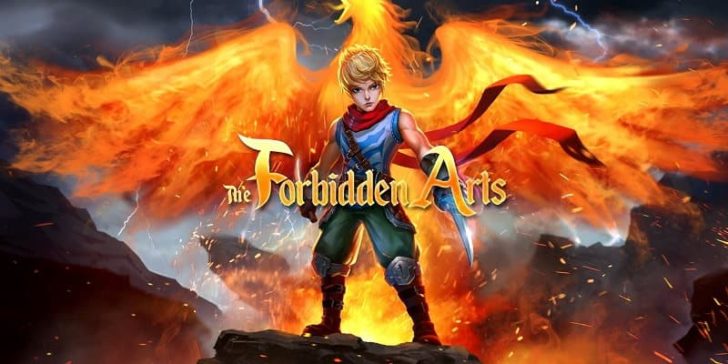 Stingbot Games have added another challenging action adventurer platformer to the Nintendo Switch library with The Forbidden Arts. The visuals will no doubt be the first thing to grab your attention. The colors are bright and the art style is charming. It’s heavily reminiscent from the Super Nintendo and GameCube era where platformers ruled the lands.

The Power of Flame

This story follows the journey of a young man named Phoenix. He is armed with two swords, but before long he realizes he is far more powerful than once thought. Phoenix harnesses the ability to wield fire, better known as a pyromancer. You can shoot fire balls at enemies, hadouken style. As you progress across the game’s 5 worlds you will learn new spells to aid in your venture. These magic abilities are limited though and this can only be refilled at campfires or near torches, so use these special abilities wisely.

Aside from your swords and magic, you’ll be utilizing another tactic known as the double jump. Phoenix can also ninja gaiden himself up steep ledges and slide down walls to avoid damage from long falls. Another move that is useful is the roll. I was getting pummeled by some enemies that warp behind you after landing your first hit on them. Rolling after you hit them evaded their strike from behind and made it easy to finish them off…sneaky chaps.

Many deaths took place in sections where precise jumping was required. The controls leave a little to be desired here as it can be a little sloppy when precision is key. Making contact on spikes of any kind equals instant-death. Whether that be from ones shooting out from a wall or sitting between precarious platforming sections.

Luckily there are unlimited lives in place, but the frustration can still set in quickly due to repeated nature of the similar layouts and overall dungeon designs throughout the game that can and will offer up cheap deaths at times. Boss battles were pretty fun overall and these skirmishes force players to learn weaknesses and attack patterns in order to come out victorious.

The Forbidden Arts by Stingbot Games is a demanding platformer with a gorgeous art style that oozes with nostalgia from the era of 2D action adventures. It can be equally challenging and frustrating at times, where only the most determined gamers who adore this genre will ultimately finish it. With a little TLC in the form of future updates, it could easily become a great game. For now, it’s still by all means a solid effort with a 10-12 hour campaign that has a lot to offer for those willing to put up with its minor flaws and rather high difficulty.

The Forbidden Arts is an action adventure platformer with a focus on discovery and exploration. When the hero of the game, Phoenix, seeks the counsel of a druid to make sense of his visions, she awakens the latent pyromancy within him.