Shaq-Fu first hit the 16-bit Super Nintendo and Sega Genesis back in October of 1994.  This was before the time of YouTube and early reviews, so I was one of those gamers that picked up this brawler expecting a good time.  It had a blood code and even finishing moves in the likeliness of Mortal Kombat.  How could this game possibly go wrong?  Well, as most now know, it ended up being one of the worst games of the 16-bit console generation.  Here is a summary of what Next Generation Magazine had to say about the original Shaq-Fu at release.

In 2014, someone was loco enough to start a Indiegogo campaign for a brand new Shaq-Fu game.  The target goal was to raise $450K.  To much of everyone’s surprise, they not only met that, but received backers that put their funding at over $470K for the game.  It was now official, somehow fate would have it that the gaming world would see Shaq-Fu once more.  Could this possibly be redemption for the disastrous title from 24 years ago? 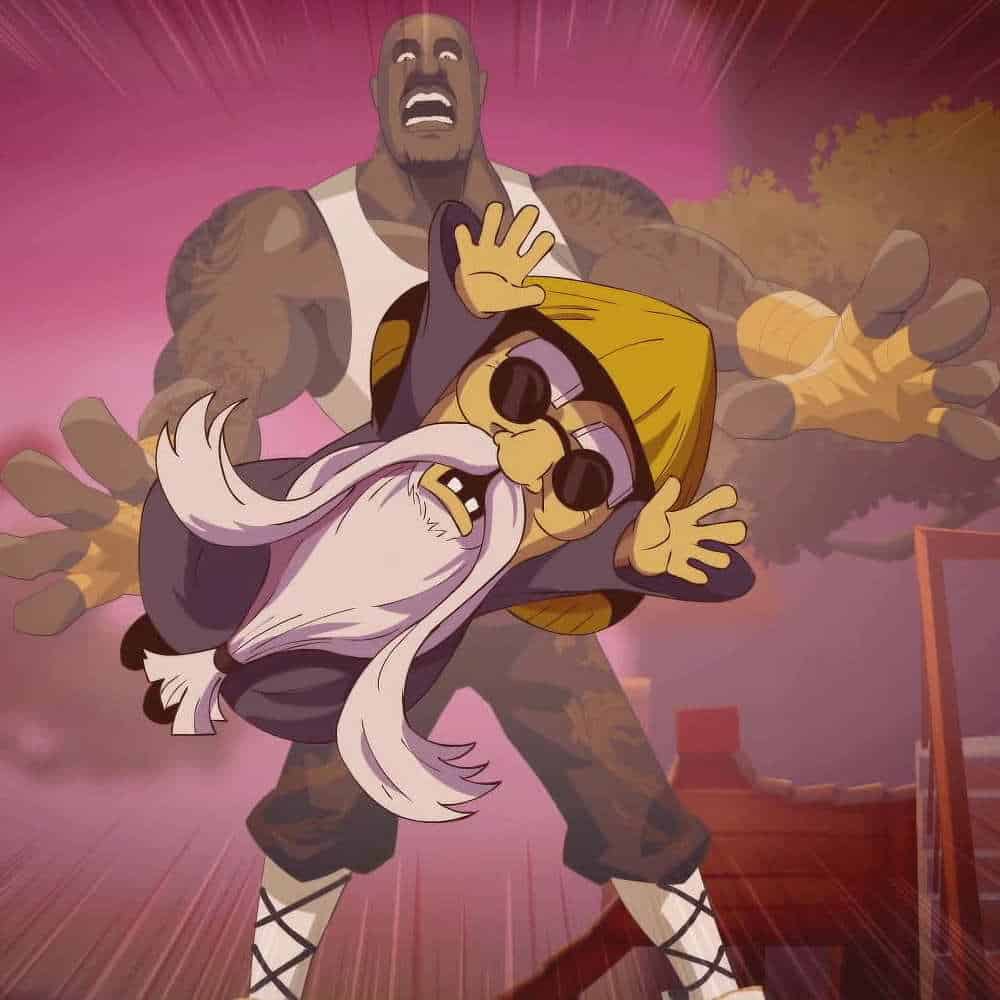 Eager yet highly skeptical, I installed and fired up Shaq Fu: A Legend Reborn.  This sequel is a straight up beat ’em up sidescroller, instead of the Fighter that the original Shaq-Fu was.   Genre wise, we’ve went from Street Fighter to Streets of Rage for example.

First off the bat, gamers are treated to a cut scene and things are looking quite nice actually.   The art style and cartoonish visuals are brightly colored, nicely detailed and the game’s animations are quite smooth.  We are already off to a far better start than expected.

The campaign follows Shaquille, a Chinese orphan, and shows he is being ridiculed for his enormous size when compared to rest of the people in his village.   Luckily, an old man named Ye-Ye sees this and he decides enough is enough.  He watches over Shaquille and introduces him to the ancient fighting style called Wu Xing.  Fast forward years later and he is now grown up, a master of this martial arts form and ready for battle.  It’s a good thing to, because they both arrive home and in shock that their entire village is under attack.  This is where the player takes control of Shaq and starts cleaning house with his size 22 shoe and gargantuan fists.

The game takes place over 6 levels that are full of action and is also packed with tons of humor that is not worried about being politically correct in the slightest sense.  Each stage takes around 30 minutes to complete and there are three levels of difficulty to choose from.  The levels are full of power-ups, things to destroy, melee weapons and they all end with a boss fight.  Every new area introduces different characters to keep things interesting.  I was shocked to find the gameplay was really fun and the one-liners often hilarious.  The controls this time around are finely tuned, making it easy to take on multiple foes with a nice combo of punches in bunches.  This builds your kick meter that sends your enemies soaring through the air and sometime even straight into the screen (just like in TMNT: IV). 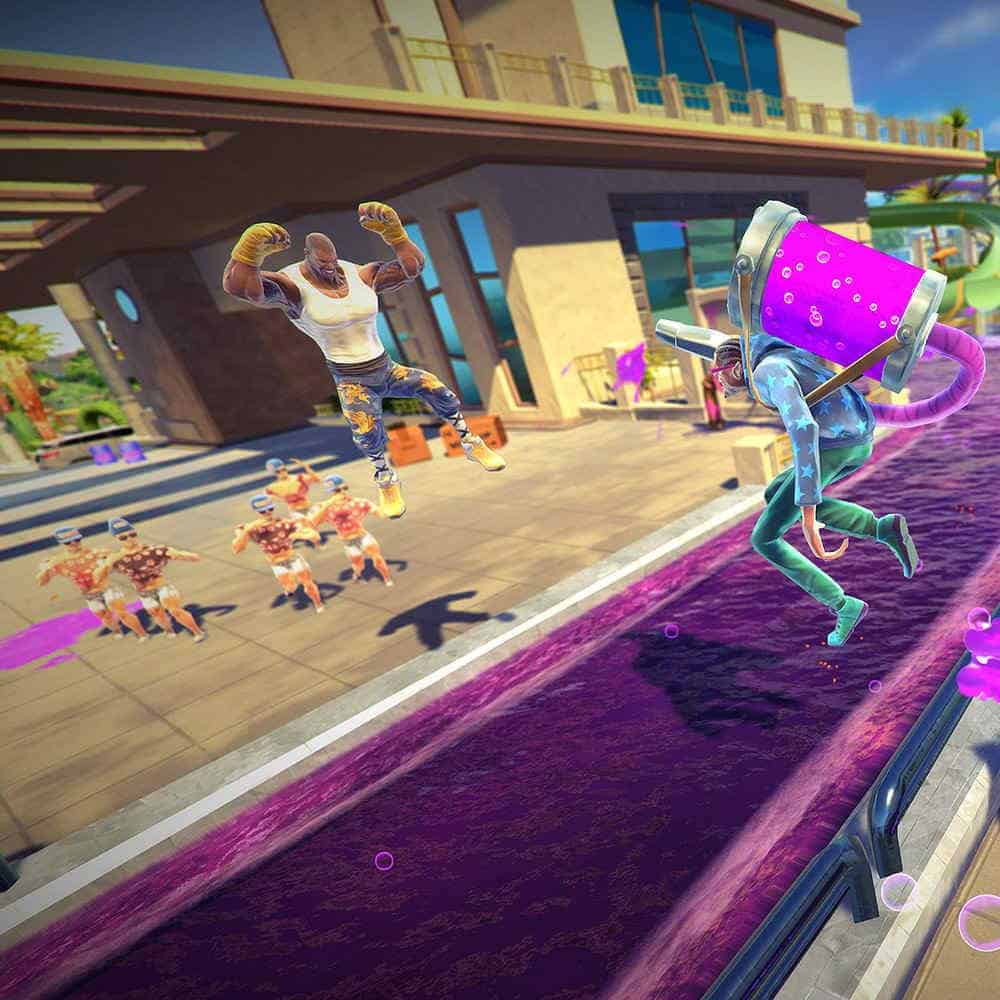 Players can charge their opponents using the L and R buttons.  You also have the ability to roll via the right analog stick, which is great for evading attacks.  Charging an enemy will temporarily stun them, leaving them open for attack.  You’ll have to do this on certain enemies in order for them to drop their guard.  The ZL and ZR buttons are used to grab weapons or to activate specials (which include finishing moves).  To top it off, there is a Mech powerup that turns Shaq into Big Diesel.  You’ll make quick work of enemies with rapid punches and ground slams.  Pay attention to the heat warnings though, because if you don’t release the pressure (by pushing the A button when prompted), the suit will explode.

I suddenly found myself thoroughly enjoying this beat ’em up.  This is when I realized Saber Interactive has somehow pulled it off and made a solid game here.  Every odd was against them, but somehow they came through.  If that wasn’t enough, for those gamers that bought NBA Playgrounds early on the Nintendo Switch, they will be receiving this game for free in the eShop!  This was due to some technical issues and lack of multiplayer functionality at launch for NBA Playgrounds.  I thought that was a really cool move and kind gesture to let fans know they care.

Shaq Fu: A Legend Reborn is full of surprises.  It’s a solid beat ’em up that features colorful visuals, loads of humor, frantic action and tight controls that ensure the combat is fun and engaging.  Factoring in everything Saber Interactive has delivered here, I’m as shocked as anyone to highly recommend this sequel; especially for those that picked up the original back in the 16-bit days.  It may have taken over 2 decades, but the Shaq-Fu name finally has redemption.

Shaq Fu: A Legend Reborn is what the original game should have been an instant classic. We're talking Streets of Rage meets Street Fighter meets Devil May Cry.