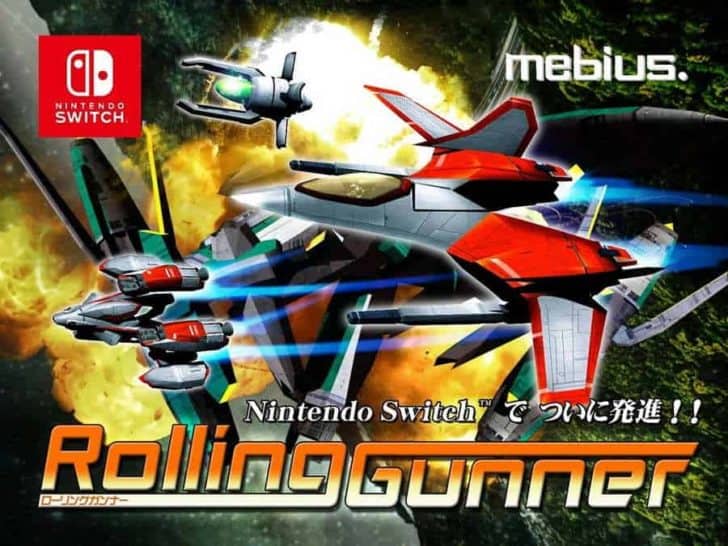 Rolling Gunner is a gorgeous side-scrolling shoot ’em up developed by Mebius. It’s set in the year 2061 and a new element to power engines has been discovered. All engines now use Busterium as their fuel source, which is controlled by an automated system called BAC. It has become self aware and is now determined to exterminate its creator, the human race.

I feel the need — the need for speed

All the cards are on the table. Gamers must pilot their way through 6 stages of mayhem and face off against gigantic bosses to save mankind. There are 3 ships to select from. Each offers distinctive skill sets. Some offer greater speed, but at the cost of firing range/spread. It’s a give and take where you will have to decide which ship fits your specific play-style best.

Shmups are known for their white knuckle induced difficulty and Rolling Gunner is no different. However, Mebius has put a training mode and well scaled difficulty options in place, that range from Casual to Novice. It makes the game very approachable, regardless of experience or age.

Your ship’s guns can unleash its power in a 360 degree spread. It can also be harnessed via the Y button to focus its firepower directly onto an enemy for maximum damage. This is especially useful during the epic large scale boss battles that take place. The ZL button drops a nuke-like bomb that devastates everything on screen. These come in handy when you are overwhelmed by enemy gunfire with nowhere to go.

Enemies drop medals as you blast them to bits. Gather enough and you will be rewarded with a powerups to your guns. You’ll need to get in close to collect these. It will be up to you if the risk is worth the reward. The amount of projectiles and enemy ships on screen to avoid at times is nothing short of pure chaos. This is what the bullet hell genre is all about.

Rolling Gunner looks incredible on the Switch. It could very well be the best looking shmup on the system. The colors and art design implemented by Mebius just shine. Even with all the madness that is generated on screen, the performance was excellent in both handheld and dock mode. A proper shoot ’em up has to be paired with a killer soundtrack. Go ahead and check another box thanks to composer COSIO. The electronic beats pair in near perfection to the frantic action on screen.

Rolling Gunner proves to be a heavy hitter in the shmup genre. Phenomenal controls, vibrant visuals and thrilling boss battles are just a few of the triumphs accomplished by Mebius. The varied difficulty options, stellar soundtrack and unique gameplay elements make this a must have for shoot ’em up fans. Collectors can look forward to a hard copy edition later this year. We will no doubt be double dipping on this release.

With humanity on the verge of extinction, a secret internal division of Lerman Matsunaga had the foresight to design a special weapon against BAC: the Rolling Gun. Operated and controlled via brain implant, humanity’s fate now rests in the hands of a courageous RF-42R STORK pilot who must set out to destroy BAC at the old Lerman Matsunaga building, which has been turned into a near impenetrable BAC fort. This is the last hope for humankind.