Rise and Shine is a new action adventure game and is probably one of the best looking games on the Nintendo Switch.  Every level, backdrop, effect and the entire cast are beautifully detailed with immense color and the animation is incredibly smooth.  It’s a very challenging game, but one that is fair.  Once you learn from your mistakes and properly analyze your enemies attack patterns, you’ll find yourself progressing past them as your skills, accuracy and strategy improve. 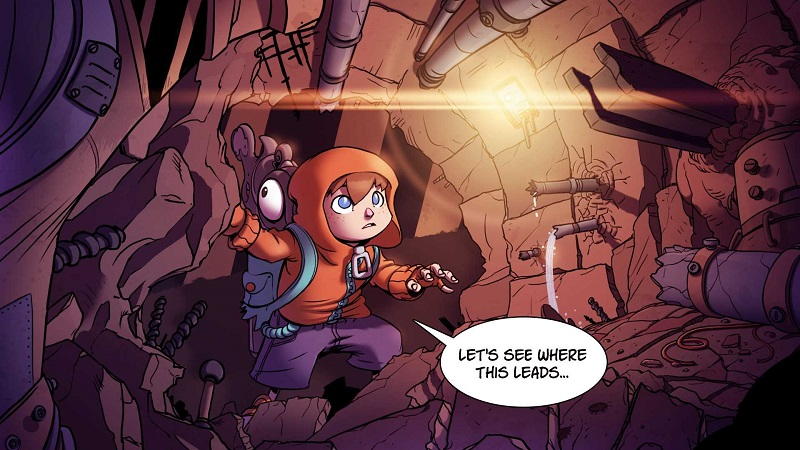 The game starts off with an awesome cut scene that kicks things off with a bang.  After this scene ends, the game officially starts, but it goes back 1 hour from that event that just took place.  Again, it’s incredibly detailed and gives players a glimpse of what to expect in this title.  It’s quickly apparent this is not going to be an easy venture, but I was absolutely hooked from the first few minutes of Rise and Shine till the credits rolled.  There are so many references and shout outs to some of my favorite gaming franchises throughout the campaign; including Mario, DK, Zelda, Q*bert, MGS, Duck Hunt, Gears of War and many more. 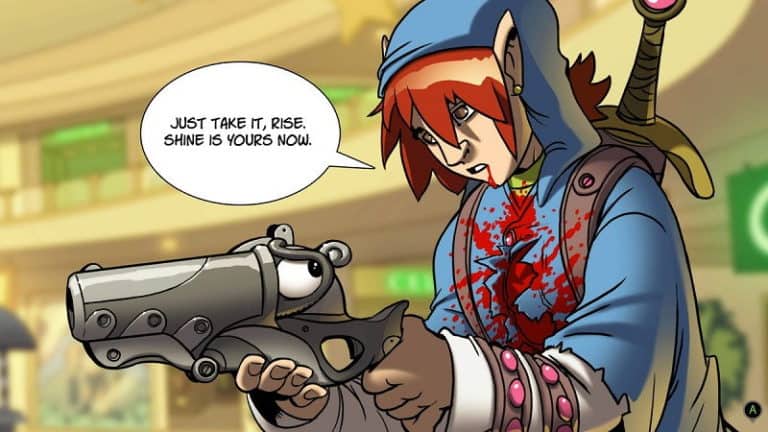 Rise is the hero of this star, who gets paired up with Shine who is the sarcastic gun that smokes all the enemies and bosses you’ll be facing.  He’ll voice his opinion throughout the campaign and is pretty hilarious at times; throwing jabs at Rise such as “I’m sure those dirty diapers are heavy, but we have to reach the palace”.  Our protagonist of the story sees his planet in ruins, and runs into the nearest building for shelter.  This is where he witnesses the “legendary warrior” engage in his last fight and is given Shine and told to deliver it to the King.  Rise, while young and scared, accepts the mission and so begins his epic adventure. 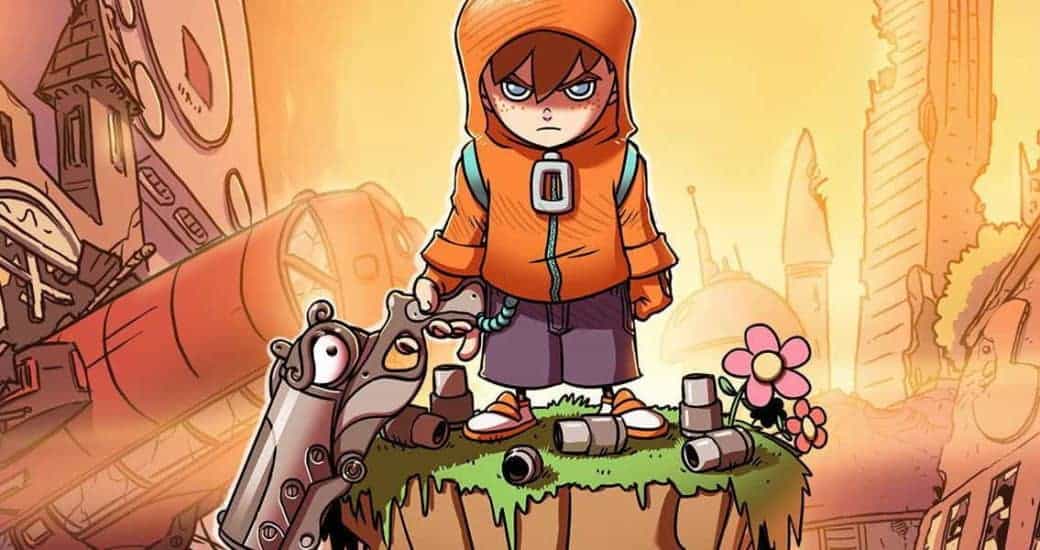 Shine allows Rise infinite respawns which you will need as the game is no cake walk.  While you can take a little damage from small gunfire, everything else pretty much one-shots you, making you properly calculate each move, jump and shot to make it count.  You can dash and double jump to evade getting hit, which you’ll utilize constantly to survive and make it through each level.  There are many powerups that Shine will be able to utilize to as you progress through the game.  These range from a Laser Sight, Electric Bullets,  an RC add-on for controlling bullets via the analog stick, to an Explosive RPG attachment for inflicting maximum damage.

Rise finds a sanctuary where much of the city have been hiding out at to escape the dangers outside.  It’s here he finds his mother is still alive, but his dad is currently deployed fighting the evil forces at hand.  It is here you will find out that Shine is the key to the most powerful weapon on the planet that can save them all if Rise can make it there.  He says goodbye to his mother and heads off to save the world. 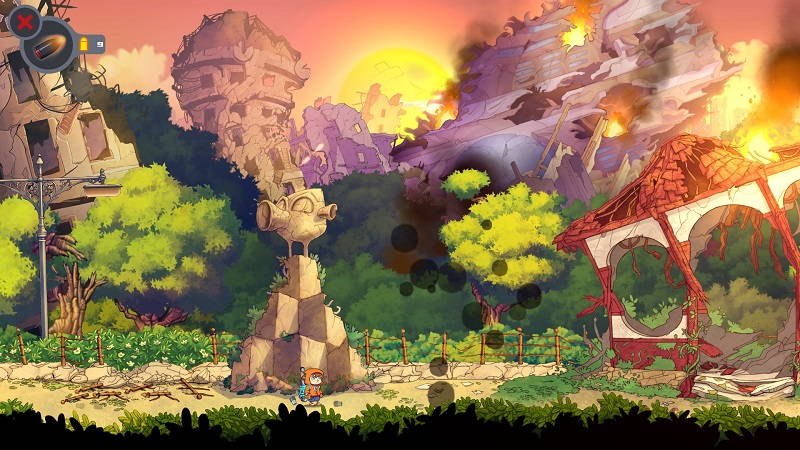 By this point you’ll gain the RC add-on ability and be able to guide a single bullet.  These are where the puzzles begin, as you must be in a certain range and anything that hits the bullet causes it to explode.  You’ll have to properly navigate the bullet, dodging other gunfire and obstacles while also figuring out precisely where to shoot from to be in range of what you are needing to take out (electrical circuits for doors for example).  Next up you’ll test all your skills against a spaceship that has to be taken out to advance further.  Just after defeating this foe, you are immediately faced against the towering beast that stars in the beginning cut scene.  I died a lot here, but finally destroyed the monstrous menace and kept pushing forward in order to reach the King. 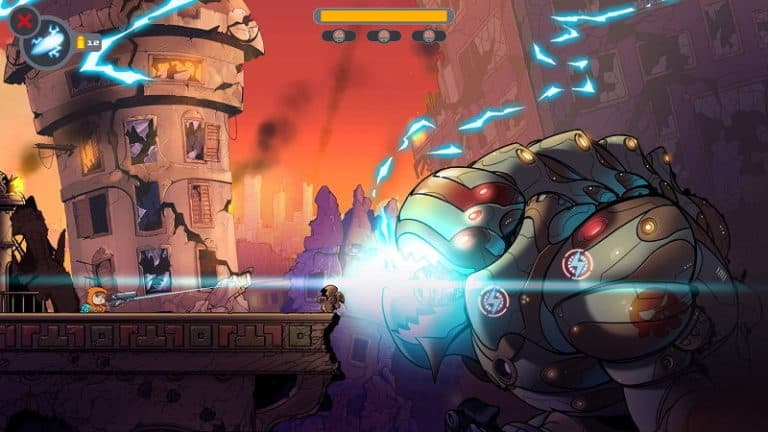 Defeating this boss opens up another cut-scene where you’ll meet a few other survivors that have their own ship and will help Rise reach the palace.  The pilot agrees to only go so far as the palaces grounds have been poisoned and Rise requires a gas mask which they only have one of.  Prepare to travel deep within dark caverns, where there is little light to be found and the undead await your arrival with ravenous appetites.  By now you will have acquired the flash light add-on and Electric Bullets.  Both of these abilities will help you illuminate small areas to give you a fighting chance of getting out alive.

Once above ground, things just keep on getting more difficult and Rise spots a Colossus that is slowly being killed by robots.  It’s up to you to save this giant and it is quite the challenge to complete.  After a few more puzzles and some enemy waves, you’ll find the stairs leading to the palace and at last the King.

Rise finds a horror scene, as everyone inside has been slain.  Here you will see the King, who is one of gaming’s most iconic characters.  On each side of of King’s chair are two other retro gaming set pieces that tie into the palace cut-scene that plays.  The nostalgia you see and feel from this game is just amazing, especially for those that grew up playing since the NES era.  The work from the devs to put in all these fantastic easter eggs is greatly appreciated.

As a nice surprise, Rise gets to pilot the ship and control the guns.  I really enjoyed this part, as it helped to mix up the gameplay and throw something completely different at the player.  As with the rest of the game, it was fast paced, frantic, and incredibly fun.  The ship now needs a spark plug which has to be found, giving Rise a short quest to a new area to source out this needed part.  Here you’ll compete in many challenges, that will force you to become extremely efficient with all your powerups.  Some of the challenges were a bit cumbersome due to the controls of the RPG add-on, but the many failed attempts did help me get much more precise with how to properly time and aim my shots.  Once you beat all the challenges,  Rise is awarded with the needed spark plug to get the ship’s engine back to 100%.

Now Rise is off to the final level of the game and I cannot tell you how many times I died.  It was a last stand type of scenario.  You’ll have to stand your ground and take down whatever comes at you and it’s an endless wave of enemies that you’ll be facing.  You will have to utilize every powerup and ability Shine now has to get past this part, while being in constant movement or taking appropriate cover.  The strategy you have to implement in this final wave is pretty intense.

Once I finally came out victorious, I wondered what in the world could be around the corner.  The game didn’t disappoint, the final Boss awaited my arrival.  By now you’ll know of a huge twist in the game and at the same time, it references it to another highly successful franchise and video game character.  The final Boss, as one might imagine, is very difficult as one mistake means you die.  Once this threat is defeated though, the feeling of accomplishment is huge.  Cut-scenes follow and yet another crazy sequence of events occurs.

The finale to this story ends in fantastic conclusion that concludes as strong as the game first started.  Rise and Shine is a brilliant 2D platformer that references some of gaming’s most iconic franchises while offering a unique experience all of its own.  It’s packed with non-stop action, twists and the art style and animation make it one of the most gorgeous games on the Nintendo Switch to date.  It’s certainly a “Git Gud” game as there is no hand holding here and only the most determined gamers will finish this one.  The experience one gets from the campaign makes every death and respawn completely worth it and it’s easily one of my favorite games of 2018.

Rise & Shine is a true "think and gun" that combines elements of arcade shooters, bullet hells, and puzzle platformers to create a new blend of strategy and viscera. Switch between Shine's add-ons to solve puzzles that redefine what bullets can do. Guide projectiles through intricate mazes, electrify damaged equipment to discover new pathways, and juggle 8-bit fruit because why not?