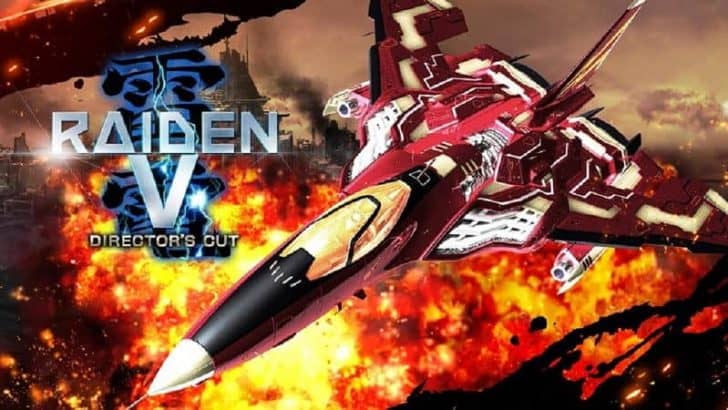 Vertically scrolling shooters were absolutely huge at the Arcades in the 1990s. Gamers couldn’t wait to pilot their ships and engage against the relentless alien threat. Raiden was the pinnacle of this genre and sold over 17,000 arcade cabs due to the immense popularity behind this franchise. It later saw ports to the TurboGrafx-16, Atari Jaguar, Super Nintendo, Sega Genesis and eventually even hit the mobile market. Nearly 3 decades later and we are now covering the latest entry, Raiden V: Director’s Cut on the Nintendo Switch.

The Master of Bullet Hell Has Returned

Raiden V: Director’s Cut plays and looks gorgeous on the Switch. This special version comes with many goodies including new stages, bosses and voice acting. Local cooperative play is supported and highly recommended. It features two modes including Story and Boss Mission. There is also a gallery available with all kinds of cool game art, made especially for the fans.

The colors and visual effects explode with intense detail across all of the 8 stages. Performance is outstanding in both docked and portable mode. All of the action is centered, with a border on each side. These side sections display your shield, remaining bombs, game score and also feature communication from your supportive wingman that accompany you through each stage. Hopefully in the future a vertical style layout will be supported on the Switch to give it that truly authentic arcade experience.

Players can choose between three different ships. Check their stats to see what lines up best with your play-style. I personally rocked out with Azuma for my playthrough. Once you choose your weapons, its time to blast some baddies. With three powerups at your disposal in each stage (Red, Blue and Purple), you can constantly change up your firepower. It’s a ton of fun to see which one you do best with and what deals the most damage against bosses. The red cannon has a nice wide spread, which is ideal for clearing out swarms of enemies. The blue laser works great when you can focus on one specific target. The purple beam whips around in complete chaos, taking out a lot of enemies at one time, but it has a lower rate of damage. It’s all well balanced and gives the player total control in how they engage their enemies.

A Shooter for both the Veteran and Newcomer

Shoot ’em ups are notorious for their steep difficulty and unforgiving gameplay. The devs at Moss Co. have found a way to appeal this release to a much wider audience while keeping everyone happy. Instead of lives, you have a shield. This way one hit doesn’t immediately take you out. Within the options menu, this shield can either be strengthened or weakened. Veterans of the franchise will no doubt drop it as low as possible to make it as brutal as its predecessors. I feel this approach is ingenious and one that many other developers could implement with great success as well.

Raiden V: Director’s Cut fires on all cylinders on the Nintendo Switch. The high altitude chaos displayed on screen is simply gorgeous and the finely tuned difficulty options make this entry accessible to just about any gamer. The grandfather of Shoot ’em ups just made a comeback.

Arcade hit Raiden first left its mark on the shooting genre 25 years ago. The easy to learn, hard to master series comes to the Nintendo Switch in its most modern and advanced form yet! Join the war for Earth’s future-where the tide of battle holds constant surprises.