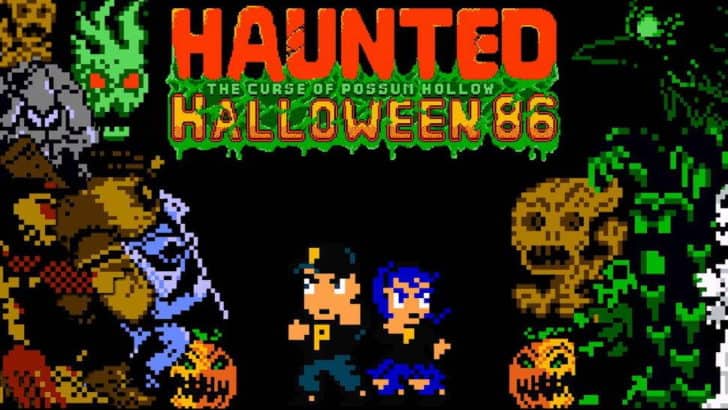 Retrotainment Games rocked the retro scene back in 2015 with HAUNTED: Halloween ’85. It was a brand new side scrolling beat ’em up for the iconic Nintendo NES.  The game was critically acclaimed, created by 5 guys that absolutely love the 8-bit era.  This success prompted an immediate sequel, properly titled “HAUNTED: Halloween ’86”.  It recently landed on the Nintendo eShop, which is another milestone for the talented small team.  Time to jump back to 1986 and crack some pixelated ghouls.

The Return to Possum Hollow 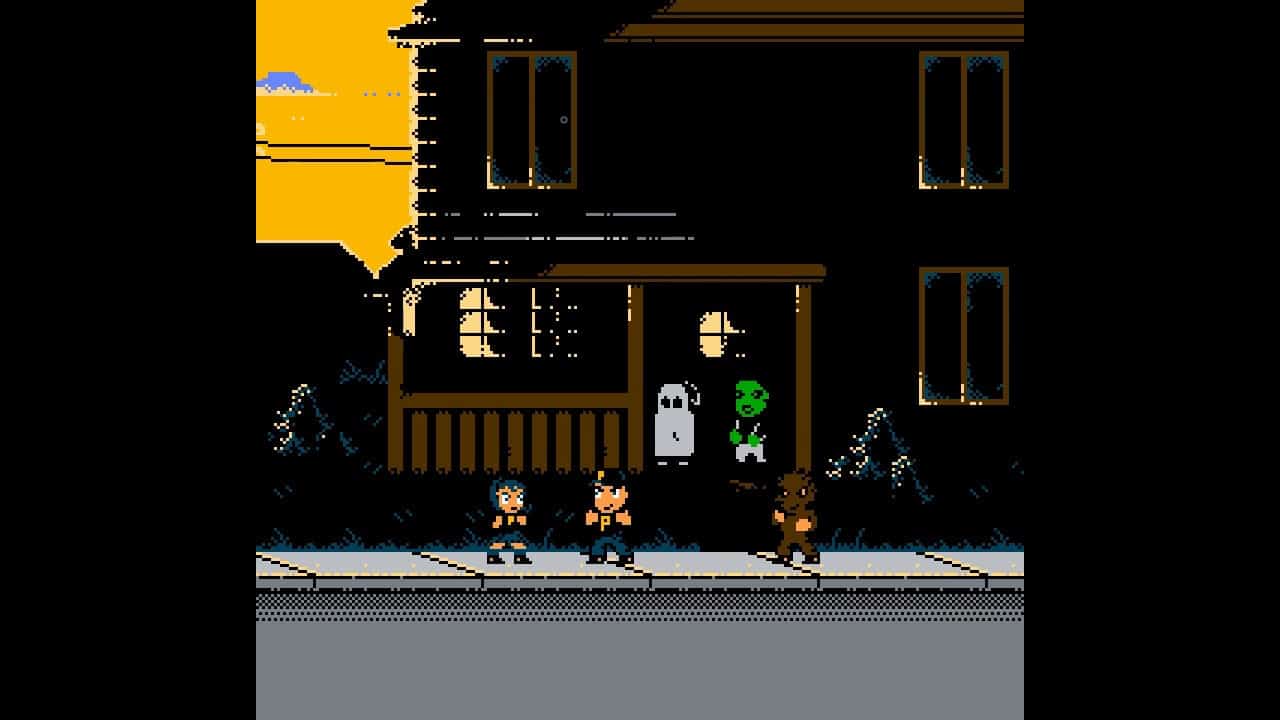 It’s Halloween once again and with that comes trouble for our two protagonists Donny and Tami.  That’s right, for this sequel you can swap back and forth between both characters.  Trust me, you’ll need the health bar of both to get through some of the tougher levels and boss battles.  It’s a fun mechanic and introduces some new strategy for this amazing 2nd venture from Retrotainment Games.

The game kicks off with an optional tutorial, which goes over the basic controls, plus the additional power moves.  Here you learn how to punch, uppercut, slide attack, double jump and dodge.  With the controls explained, it’s now time to head out to downtown Possum Hollow.  Everyone is out and about in costumes ready to reap in that sweet candy, but rumors are afloat that some strange sounds have been coming from the old abandoned farmhouse.  Before long, Donny is dared to go check it out and being the macho type, he immediately accepts the challenge.  His friend Tami even tags along as she is quite the little daredevil herself.

Once at the farmhouse, they locate what appears to be torn portion of a map (additional pieces actually unlock new abilities as you progress).  Tami is actually even more interested in investigating further at this point, while Donny is having some last minute jitters.  She pokes fun at his spooked behavior, questioning his so called bravery.  He eventually shrugs off his reservations and finally agrees to go inside the ominous farmhouse. Mere moments later, terror strikes them both with reckless force.

“Up from above, concealed by shadows, a dark ghoulish figure leaps and lands beside them, shattering the weak wooden floors of the old abandoned farmhouse.  This sends both Donny and Tami falling into the unknown below.  They now find themselves…in a dungeon.  Welcome to HAUNTED: Halloween ’86.”

As mentioned earlier, this can be a pretty tough game.  Luckily you can select what type of challenge you are truly up for.  The choices are Easy, Normal and Hard.  Your HP and power moves are set in relation to what difficulty is selected.  I recommend starting on Easy, as this gives you 4 HP and all the power moves right off the bat. 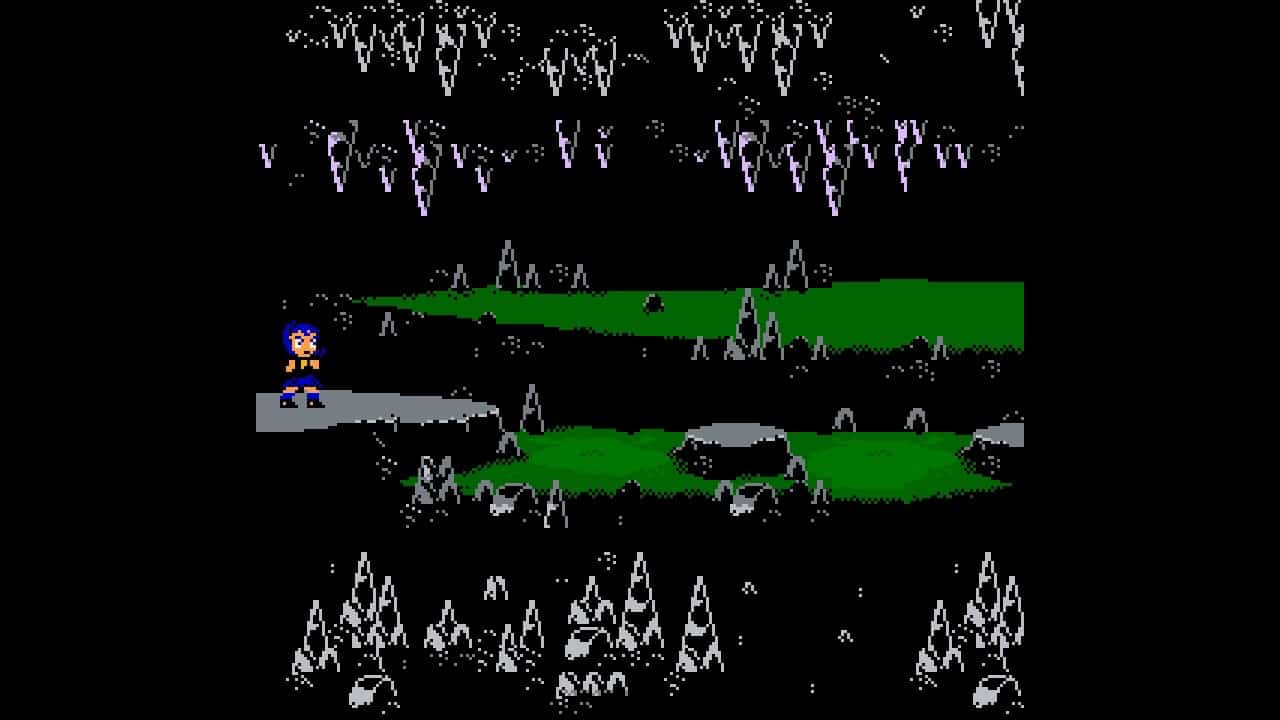 Retrotainment Games has crafted this game with the same intense difficulty found on many classic 8-bit titles.  You might be surprised how quickly you can die, even when playing on Easy.  If you lose your focus for even a brief second, you can take multiple hits.  There are lots of enemies gunning for you that includes mutant fish, demonic crows, rabid rats, floating spirit heads, zombies, skeletons and much more.  You’ll have to be quick in using all the power moves and switching between Donny and Tami when needed.  If you see candy, be sure and snatch it up, as this gives you health.  When either protagonist takes too many hits, they themselves glow bright green and turn into a zombie…that’s game over man.

The game’s controls feel excellent as you uppercut the heads off the undead, only to throw it at the next enemy.  The slide attack works really well when in a jam; as does the double jump ability for evading and making those long precision based jumps.  It’s highly accessible with a little practice and determination in place.  You’ll soon find yourself getting further and further with each playthrough. 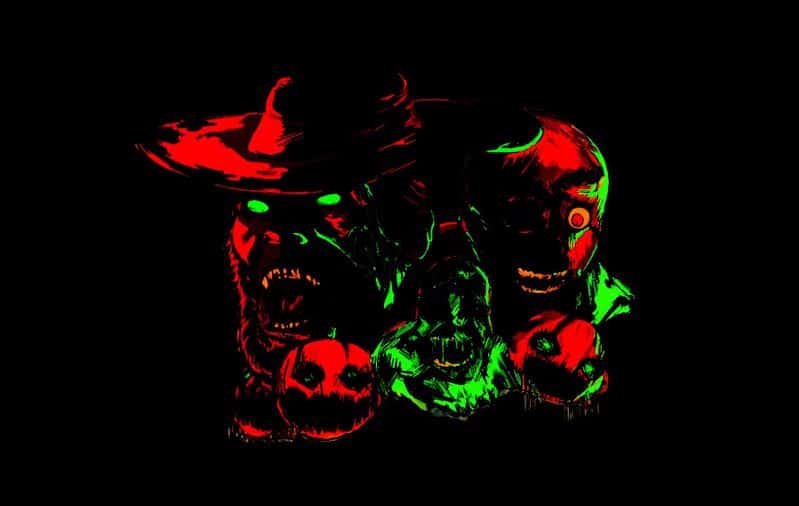 The dungeon is just the beginning of this quest.  As you press forward, Donny and Tami have to survive a horrific steel mill, a haunted field, a train ride of terror and several daunting bosses.  Each boss requires a clever way to be defeated.  You’ll die a lot, but it’s a forgiving game in that you have continues and the deaths are not cheap; it’s merely you didn’t dodge in time or have yet to learn enemy or boss attack patterns.  The entire game features interactive backgrounds and impressive scrolling effects throughout.  Animations and sprites are beautifully implemented and supremely on point for what was possible within this golden era of gaming.

Let’s go ahead and talk about the game’s insane soundtrack.  What an incredible playlist of delightful 8-bit tunes.  Even the title screen greets gamers with an awesome track.  Within the options menu, there is a music player where you can select specific songs based off the level or boss fight its from.  This OST should be available for purchase, it’s that good. 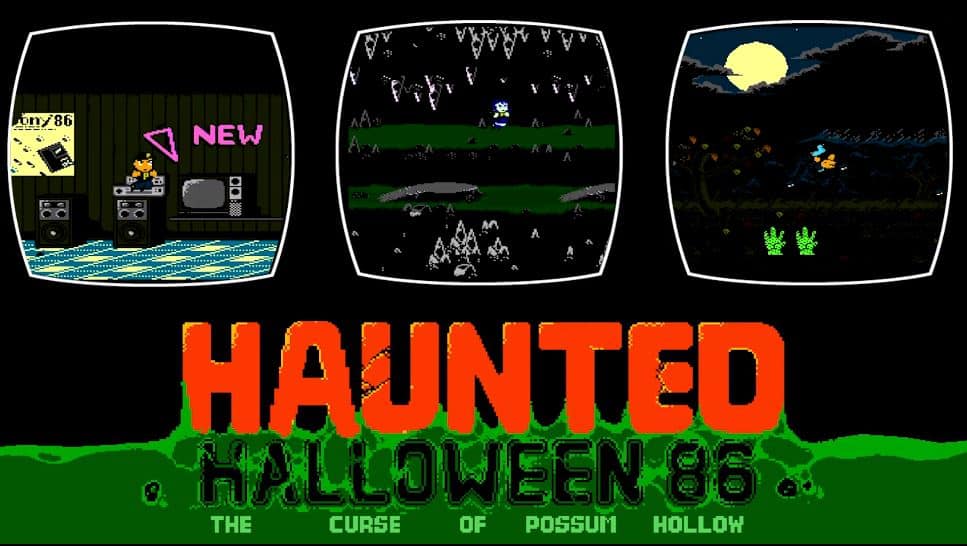 HAUNTED: Halloween ’86 from Retrotainment Games is a fantastic sequel and venture for retro gamers that adore the 8-bit era.  It’s right at home on the Nintendo Switch and will certainly strum several nostalgic strings with its impressively accurate NES era presentation and soundtrack.  It’s a phenomenal flashback to the beloved arcade and console platformers that ruled within the late ’80s.  Let’s hope we see a third entry for a truly haunted trilogy.