Bleed is a new arcade styled action-platformer that focuses on speed and agility.  It’s from Bootdisk Revolution and publisher Digerati.  It’s bright, colorful, and offers up plenty of challenging levels and large menacing boss battles.

The game opens up and introduces the main character Wryn and her future arch nemesis.  Wryn wishes to be the greatest hero of all time and is determined to make this a reality.  To prepare herself for the journey ahead, she has a list that details each and every boss that needs to be defeated in order to accomplish this ambitious goal.  They are checked off one by one as you progress through the game’s seven stages.  The last stage features every boss Wryn has put beaten, plus the final showdown between her and the impostor that has stolen her thunder and title of being the greatest hero in history.  Thank goodness for checkpoints. 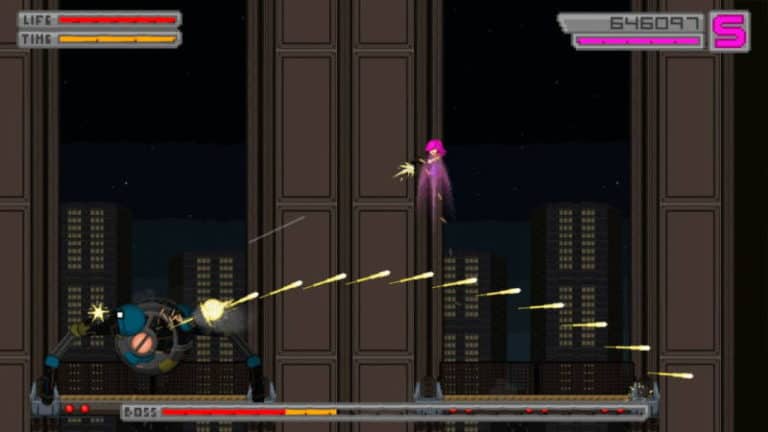 Bleed is not only a throwback to the 2D game genre in the visual sense, but it also contains that old school difficulty often present in many retro titles.  I actually changed the control scheme after the first level, as it seemed a bit awkward; but I rather quickly came to the conclusion that the developer had it right originally.  You aim and fire with the right analog stick, jump with “ZL” (including in-air dashes and wall jumps) and switch weapons (dual wielding machine guns or rockets) with the “R” bumper. 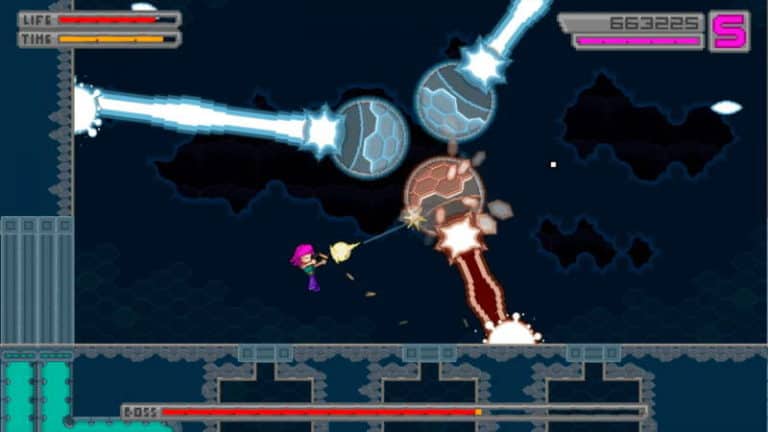 It takes a little time to settle it control-scheme wise, but once you get the hang of it, the gameplay is fantastic.  In short order, I was dodging bullets, enemies and utilizing the slow motion “bullet time” ability through the ZL button with immense satisfaction.  It does deplete fairly quick, but luckily refills automatically once depleted.  You have to choose wisely, in when and how much to use.  This creates a lot of the thrills found in the platforming and action in Bleed.  Even on Easy mode, the game is no pushover and provides a solid challenge throughout all seven levels.  There is a great selection of bosses that will no doubt keep gamers on their toes.  Everything in the game, including the bosses, are popping with color and detail.  It looks and runs very well on the Nintendo Switch.  The soundtrack is also well composed.  I had the tune from the opening screen in my head for days after beating it. 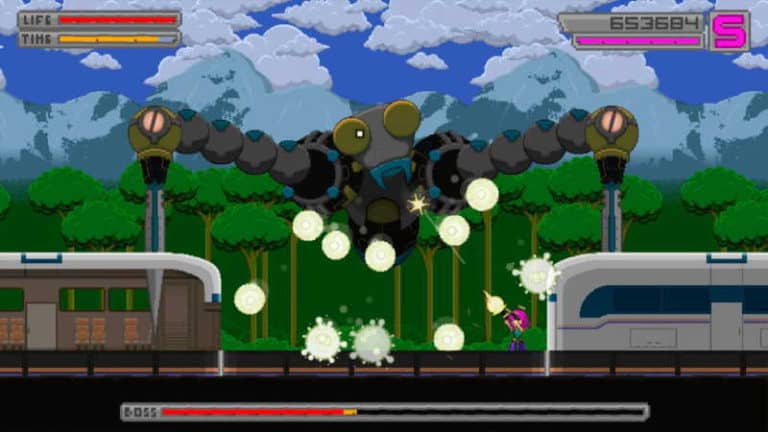 Bleed delivers a thrilling experience that features blistering action, colorful graphics and a killer soundtrack.  This is especially impressive, given this was all created by one individual, Ian Campbell.  The game is a little on the short side, but that may also be because time flies when you are having fun.  Bleed offers up fun in a big way and it’s one title gamers should no doubt add to their Switch library.