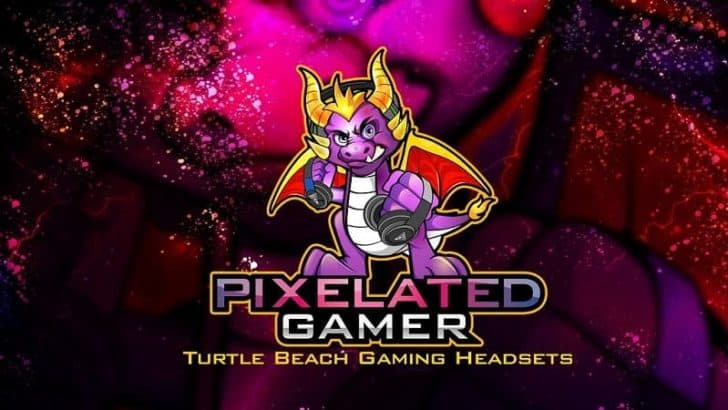 The technology powering Gaming Headsets in 2019 has grown exponentially.  Headsets used to simply be a cheap inferior alternative for those that could not afford a true surround sound system.  This is far from the truth today, as we will demonstrate through three of the latest models from Turtle Beach.

The Origin of Turtle Beach

What is now a industry leader in high performance gaming headsets, Turtle Beach first hit the scene back in the 1970s.  While they always had a passion for audio fidelity, they first began developing MIDI Synthesizers and Sound Cards.  Over three decades later, they rebranded and established new goals for the company.

Turtle Beach began placing their focus on the PC Gaming Headset market in 2005 and have since become an absolute juggernaut in this sector.  After a successful reception from critics and gamers alike, they branched out to the console scene.  In 2007, they once again advanced the Gaming Headset market and released wireless models with Surround Sound capabilities.  The team’s relentless passion for innovation allowed Turtle Beach to begin developing for the Xbox 360, Nintendo Wii and PS3.

This exposure and continued dominance in the headset sector provided the opportunity for them to partner with Major League Gaming.  The massive viewership attached to the MLG broadcasts allowed their brand to be promoted like never before.  Today, you can find Turtle Beach headsets for every modern gaming platform, whether it be the Xbox One, PlayStation 4, Nintendo Switch or PC.

High Performance Headsets for Every Budget

Turtle Beach offers arguably the most robust selection of Gaming Headsets on the market.  They range from entry level wired models, to absolute audio beasts in terms of their performance and surround sound technology in this sector.  For this feature, we’ll start out first with the entry level model and from there work our way up to headset solutions targeted towards professional gamers and audio enthusiasts. 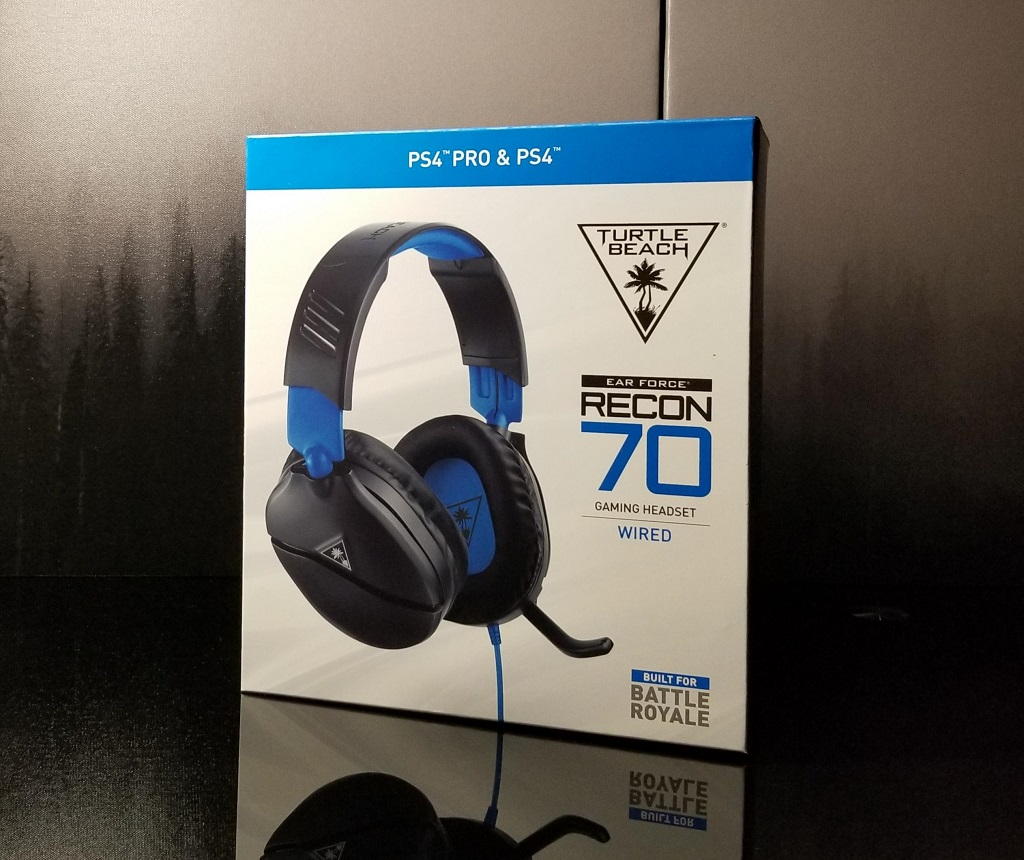 The Recon 70 Gaming Headset (PS4 Edition) is a excellent entry level model that packs a substantial punch for the price.  In fact, it is arguably the best gaming headset available under $50 by a long shot.  Its wired and connects via a 3.5mm jack that makes it very versatile in compatibility (more on that later).  Housed within the wired headset are 40mm speakers with Neodymium Magnets.  The headset itself is very lightweight, but still has a nice quality feel to them.  This PS4 edition has accents of blue on the headband and within the ear cups.  Inside you’ll find comfortable ear cushions that are compromised of a synthetic leather material and there is a foam insert located inside the headband for added comfort.  They have proven to provide hours of gaming without any complaints from our staff in regards to fitment.

Considering the highly accessible $40 price point, the 40mm drivers deliver a surprisingly amount of immersion during gameplay, alongside some excellent noise cancellation technology.  You can hear approaching enemies in Apex Legends, making it easier to counter their attacks or quickly take cover.  Remnant: From the Ashes was even more intense and terrifying due to excellent high and midrange audio performance that let you hear every monster’s roar and the howls of inbound swarms.  While the bass won’t blow you away, it’s more than enough to give extra depth to each explosion and shot fired. 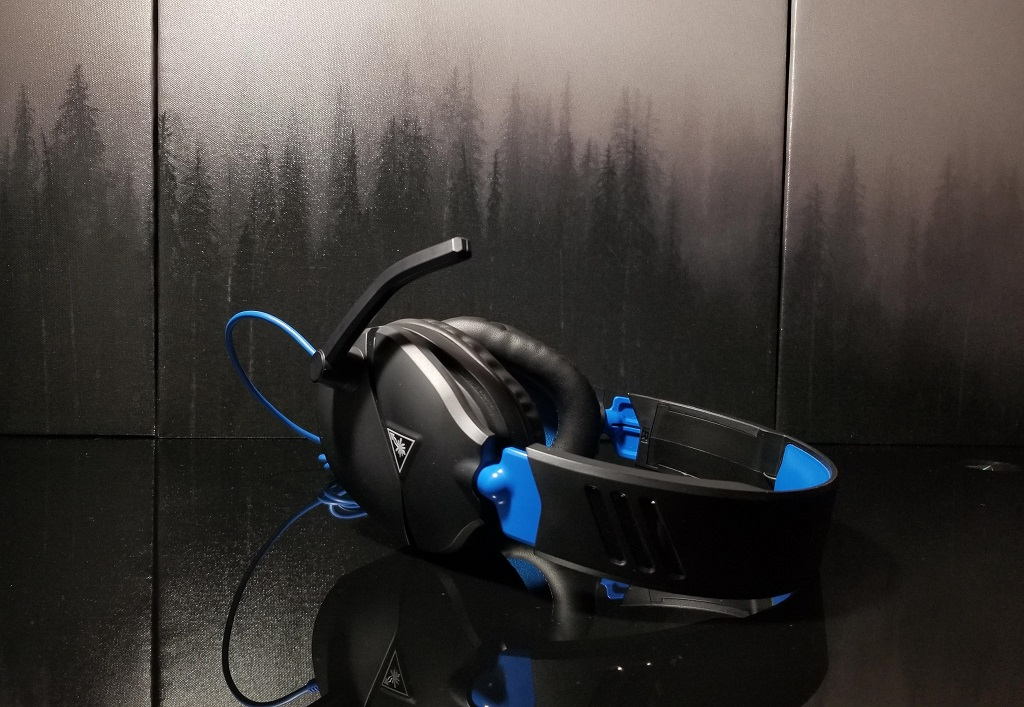 This model includes a fixed omni-directional mic, allowing players to mute themselves at a moments notice during gameplay.  We experience zero echo in the lobby or during gameplay.  The sound output is controlled through a dial located on the left side of the unit.  It’s easily accessible for quick adjustments when needed.  Even though the Recon 70 is aimed and promoted for the PS4 platform, it offers fantastic versatility across the board.  Gamers will be happy to know that they can also enjoy this excellent model on any practically device with a 3.5mm jack input.  This includes the Xbox One, Nintendo Switch, PC and various mobile devices.  Coming in at just under $40, the Recon 70 offers unmatched performance within this price point. 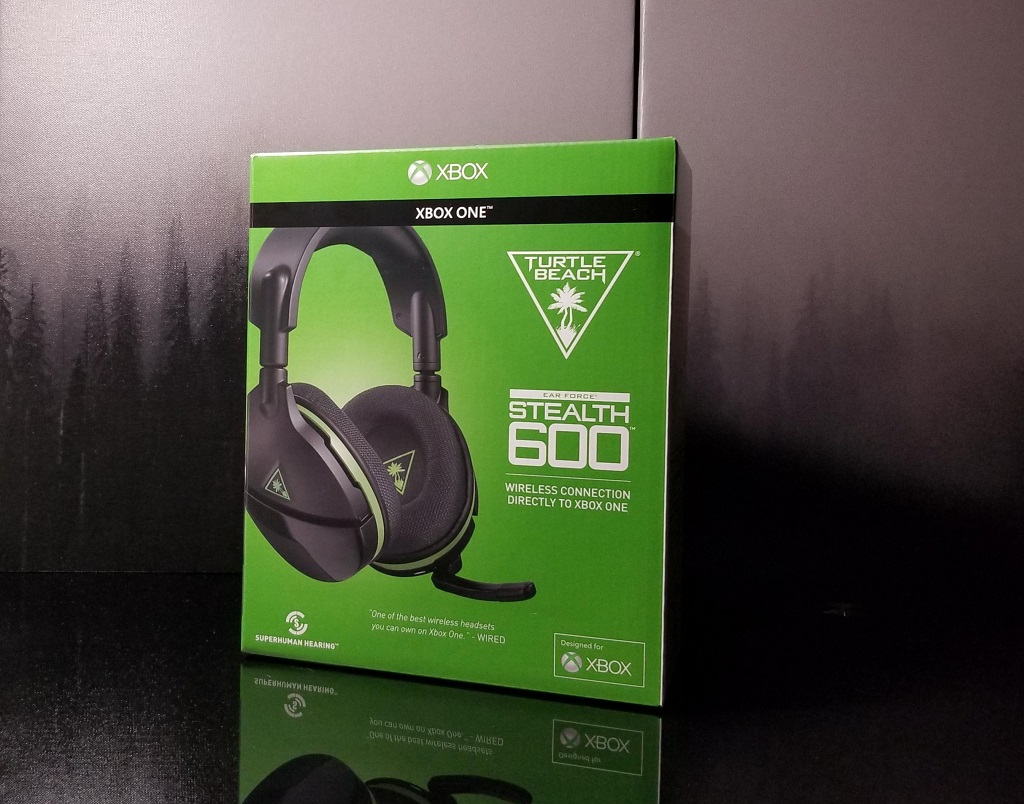 Turtle Beach has accomplished yet another milestone in offering the very first officially licensed wireless headset for the Xbox One in the Stealth 600.  Improvements from the Recon 70, outside of the being wireless, are quite substantial.  This includes larger 50mm drivers, mic monitoring, higher quality materials for the ear cushions and increased foam padding within the headband for improved comfort.  Pro Specs technology is in place to better accommodate gamers who wear glasses.  This model also features Turtle Beach’s Superhuman Hearing tech.  If you are a competitive online game, this was developed with you in mind.  It gives players a spider-sense like ability to detect where enemies are approaching from or the direction gunfire is coming from.  This can be incredibly impactful for online gamers, delivering a substantial advantage in turning the tables on your opponent.  I thoroughly enjoyed this headset while playing an extensive amount of multiplayer matches in Halo 5. 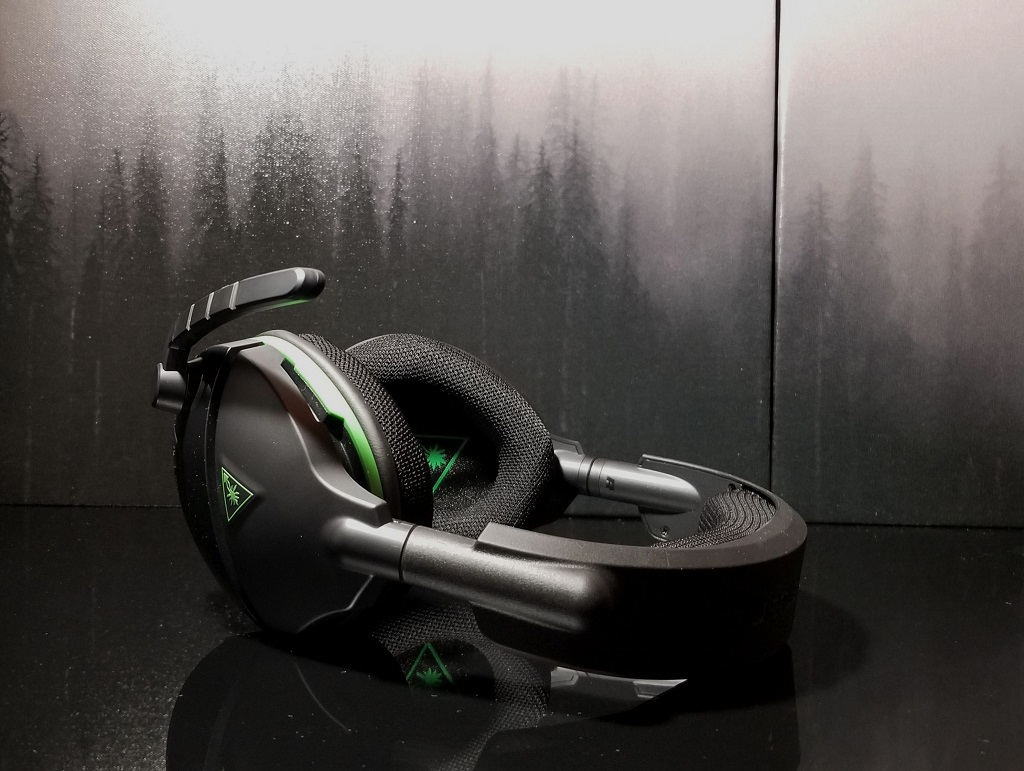 The ear cups swivel, allowing for greater flexibility in adjustments.  The volume and chat controls are located on the left side.  Just remember the volume dial is placed up top, while chat controls are below it.  The charging port is also on the left ear cup.  That leaves the Power, Audio Presets and Pairing Button for the right side.  We particularly found the equalizer adjustments to be highly effective.  It allows for far greater customization.  Tune the bass, treble and vocal output as you see fit.  The overall performance on the Stealth 600 is incredibly strong.  You’ll be experiencing your choice of either stereo or true surround sound on the Xbox One.  For under $100, you have a high performing wireless gaming headset that can be played from up to 20 feet away effectively.  There is no dongle needed here and the battery life is around 15 hours per charge.  Here we are again, where Turtle Beach’s wireless model for the Xbox One is simply impossible to be bested in its pricing segment. 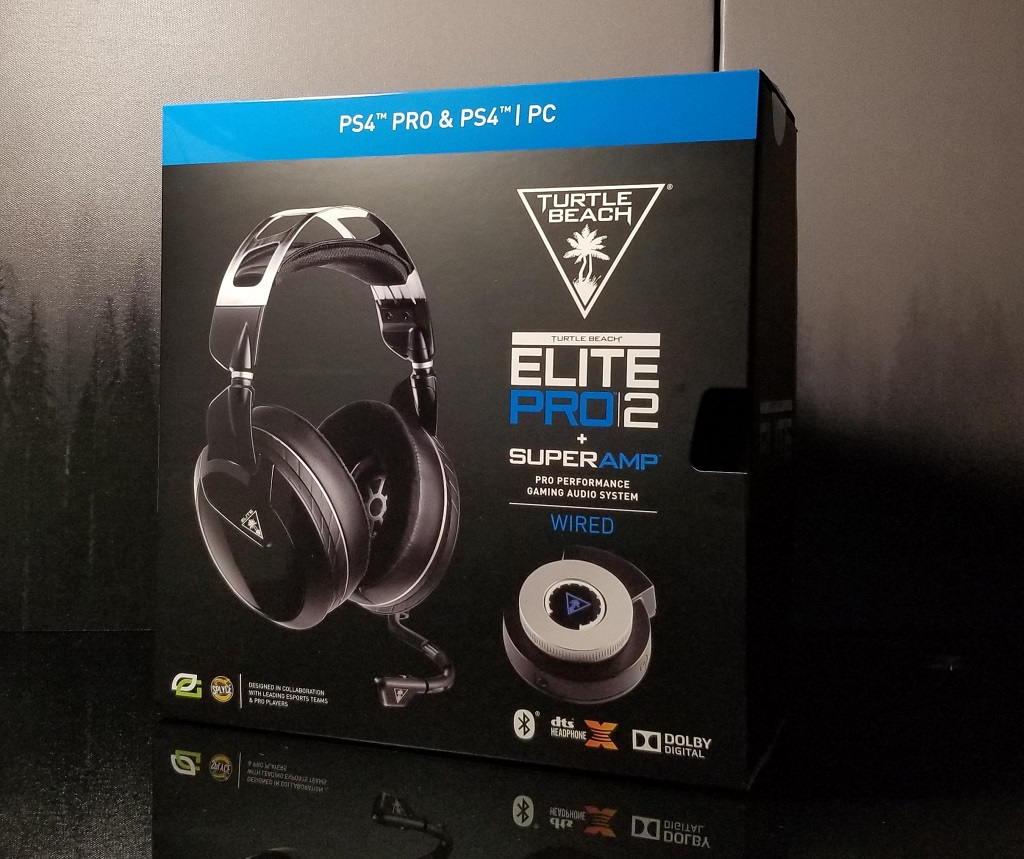 With the Elite Pro 2 Headset + SuperAmp, you are now venturing into a model specifically engineered for eSport teams.  It delivers next generation 7.1 DTS Headphone X Surround Sound Technology for the hardcore gamer camp that accepts nothing but the best.  All the boxes are ticked here for maximum performance and comfort.  It sports a gorgeous polished metal band and below that sits a suspended cushioned pad that provides outstanding support.  It houses large 50mm Nanoclear speakers, covered by gel-infused ear cushions that are insanely soft.  Hours can pass by in an instant, making you forget you’re even wearing a headset.  The bass is extremely satisfying on this model and the DTS Headphone X technology delivers an truly unique gaming experience.

That is especially true for those that wear glasses, as the ProSpecs design exclusive to Turtle Beach does wonders in this area.  You can make adjustment to what feels best with your glasses, by simply removing the ear cup.  On the reverse side you will find a tab that can increase the depth by pulling it out further.  It snaps right back on thanks to the magnetic design built-in.  The outer plastic ear cup plates can also be removed and swapped out, giving your Elite Pro 2 a truly customized look. 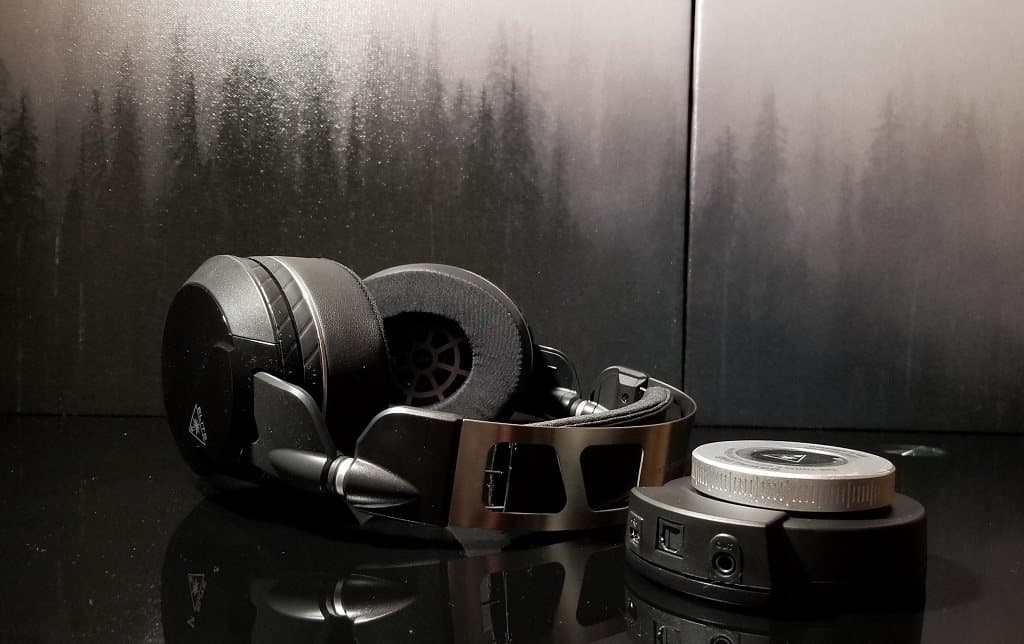 The Elite Pro 2 Headset comes with the Turtle Beach SuperAmp.  Connect it to the headset with the included 3.5mm cable.  You’ll then connect the SuperAmp to the PS4 via the 10 foot long USB cable.  If you have a an original PS4 or PS4 Pro, you can take advantage of the optical port on the SuperAmp.  If you have a PS4 slim, everything is handled through USB.

Be sure to setup the optical output port correctly on your original PS4 and PS4 Pro.  You’ll want to select Dolby Digital 5.1 and for the Audio Format settings, select Bitstream Dolby.  Next go to Audio Devices and select the “USB Headset (Elite SupreAmp PS4) for both your input and output device.  Set your volume control to the max volume and make sure the Output to Headphones setting is on Chat Audio.

For PS4 Slim owners, you will need to select the “USB Headset (Elite SupreAmp PS4) for both your input and output device.  Again, set your volume control to the max volume and lastly make sure the Output to Headphones setting is on All Audio for this platform. 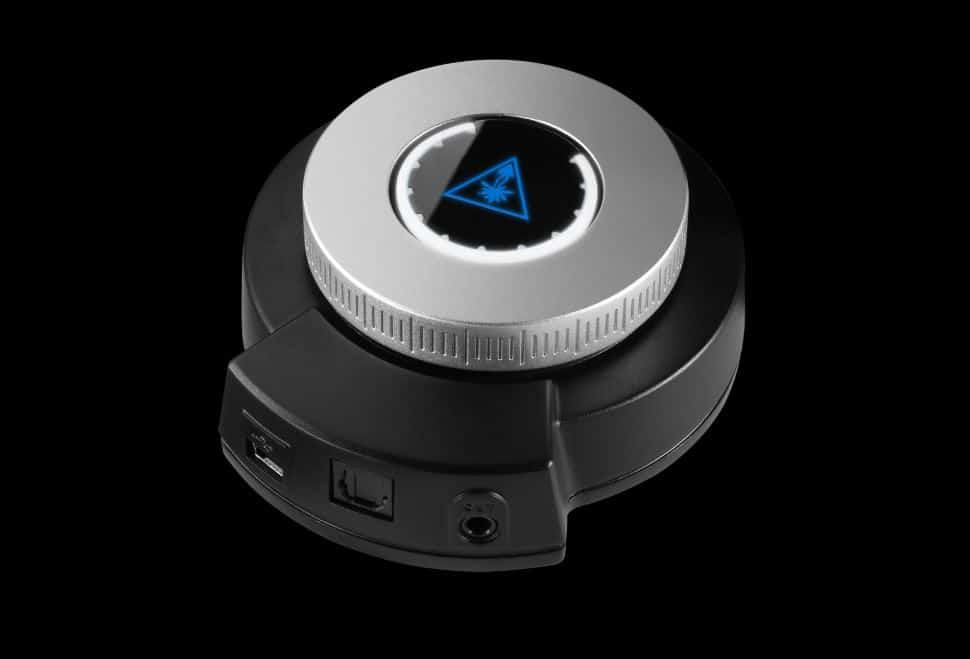 The SuperAmp features Bluetooth connectivity that enables it to communicate with the Turtle Beach Audio Hub app.  Here you can dial in the Treble, Bass, Vocal Boost and Mic sensitively.  This is accomplished by simply turning the aluminum dial on the SuperAmp.  There are several options to turn on or off within the app too, including: Superhuman Hearing, Chat Boost and Active Noise Cancellation.  Experiment with what sounds best to you and save it to a custom profile.  Variable mic monitoring helps to ensure you come across crystal clear online and that your voice is properly balanced, regardless of how loud you speak into the mic itself.  Your teammates will thank you later. 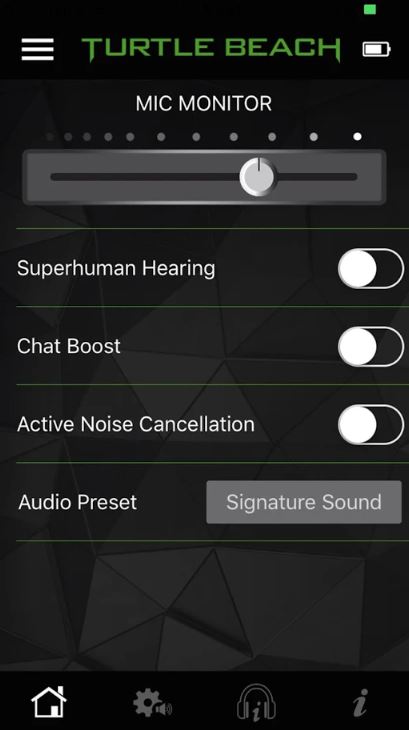 Another cool visual feature is that the center icon will light up red when you are muted and green when the mic is active.  The unique approach provided by the SuperAmp gives the Elite Pro 2 that premium feeling and everything within this system just works perfectly.  The headset itself is now clear of volume and chat controls, surround sound buttons and mute sliders.  It’s a breath of fresh air and it’s hard to go back once you experience this new take by Turtle Beach for headset audio adjustments.

The Elite Pro 2 fuses luxury and high performance audio into one highly compelling package.  The attention to detail and high end components are felt and heard within every game on this model.  It delivers outstanding audio performance and the SuperAmp in combination of the Turtle Beach app raises the depth of customization to another level.  While there are other competitive options priced around the $200-249 price bracket, we simply haven’t seen another one that matches the overall performance, build quality and options available on the Elite Pro 2.