Mega Cat Studios has released yet another new game for the Sega Genesis. This latest entry highly favors the immensely popular arcade game Strider in many ways, but also manages to carve up a truly unique and challenging experience for fans of the Hack and Slash Genre…with a twist.

I’ve always thoroughly enjoyed Mega Cat Studio titles for many reasons. They offer physical copies of these re-envisioned 16-bit Sega games for present times. Tanzer is available for the Mega Drive or Genesis and comes in an old school Genesis case with gorgeous cover art just like retro gaming fans will fondly remember back from the 90s. Open up the case and you’ll see 16-bit cart and a nice colored manual. I used to love checking out the case and manual on the ride home after picking up a new video game. It always managed to heighten my anticipation of playing the game that much further.

A deadly virus has spread across the world, leaving our female protagonist as the sole survivor, who now has responsibility of eliminating the extinction level threat. She is humanities last chance for a future.

Tanzer was a professional dancer and when I first read this I was wondering how this was going to properly fit in within the Hack & Slash Genre. The developers had brilliant insight however, as the they have implemented frantic yet beautifully orchestrated gameplay. This plays out over 40 stages and across 8 time periods.

Tanzer not only has a double jump, but yet a triple jump ability. This enables players to evade enemy projectiles with absolute precision. You can land on top of enemies without taking damage. Once you get the hang of it, you can acrobatically soar through the air, timing your hits as you flip from one enemy onto the next.

While ripping through each level at the highest rate of speed is great fun, it does come at a cost, as you won’t be able to collect the gold that is dropped by fallen foes. Many enemy types take only a one or two hits to destroy, which keeps the blazing gameplay intact. Tanzer is equipped with sharp blades that can deal quick damage and is able to be fired in six directions via the gamepad. There is one catch though, as you can’t move when attacking.

You’ll need to destroy all the enemies you can, while also evading incoming projectiles from multiple angles through the use of your double and triple jump ability. The key is steady, smooth momentum where you will find yourself effortlessly flying across each stage at crazy speeds. This is where the game absolutely shines and you realize the vision that Mega Cat Studios had for Tanzer…and it’s brilliant.

The gold acquired is extremely important to progress as you will need it to acquire crucial upgrades. Upon completing each stage, you’ll be given your score for the level, bonus points and the amount of gold collected. The next screen will display the game’s upgrades that can be purchased. There are several transmutation powerups such as Fire, Stone and Water. Each one can help you tremendously, especially during boss fights. The Stone transmutation is one of our favorites, as it both blocks projectiles and if used close enough will also deal damage upon bosses. Fire is also excellent as it offers ranged damage, where you won’t have to risk getting in close to use it.

Tanzer not only retains the look the of the iconic 16-bit era, but the difficulty as well. It may seem fairly easy at first, but that changes in quick order. You have a health bar that only allows three hits. That can happen fast and you are only given one life. It’s almost arcade like in that regard.

However, all is not lost. Take the time through first few stages getting as much gold as possible and you will then be able to use that currency towards a save state. You can then work towards purchasing a transmutation ability and once you purchase it, it’s yours for good until you shut down the console. Just like the majority of other Genesis games (I’m looking at you Contra), you start from the beginning after powering down.

Mega Cat Studios have crafted some wildly impressive pixels and art work for Tanzer. There is a lot of action and effects that take place across each stage, yet the game’s performance remains at 60 FPS. This is a crucial element due to how fast this game moves and I’m sure that the developers worked tirelessly to accomplish this. For our review, we played this on our Analogue Mega Sg and it’s simply a gorgeous game to behold.

Tanzer from Mega Cat Studios offers up a brand new and exciting Hack & Slash adventure for your Sega Genesis or Mega Drive system. The thrilling gameplay retains a solid 60 frames per second, delivering an intense experience that looks phenomenal on our Analogue Mega Sg. Fans of the iconic Strider franchise will find so much to love here. The 16-bit sprites and art direction that have been implemented are phenomenal. The difficulty is properly reminiscent of this era and will push players to perfect their timing and strikes. It has been 30 years since the Genesis hit the US market and here we are still reviewing games for it; amazing times thanks to incredibly passionate developers. 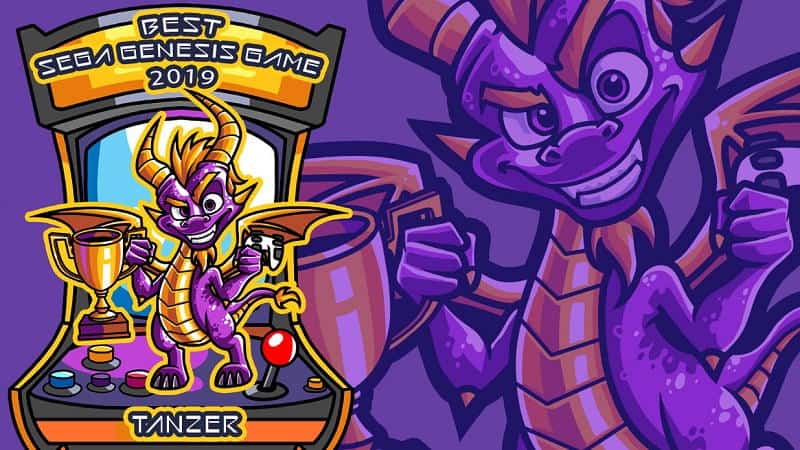 From the Old West to Ancient Rome, challenge yourself through the fast-paced pixels Tanzer has to offer. Become the last survivor of an interstellar plague while you crush enemies, grab loot, and transform with transmutational powers.