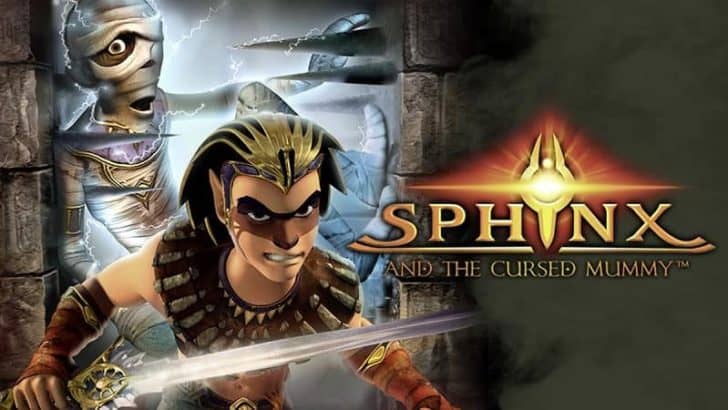 Sphinx and the Cursed Mummy first hit the scene in 2003 and was available on the original Xbox, PS2 and GameCube. It even saw a mobile release later on and most recently a PC remaster in 2017. It now is making its debut on the Nintendo Switch, thanks to THQ Nordic and developer Eurocom. The game now sports HD visuals and a wide screen ratio for a proper modern presentation.

Sphinx, the demi-god Warrior and the Cursed Mummy

Throughout this 3rd person action adventure, players take the role of Sphinx and have the help of an unusual, immortal ally…the cursed Mummy. This undead friend was formally a prince, but found himself at the wrong place at the wrong time. While he is stuck presently in this new body, his new current form allows for some very interesting methods in solving puzzles and obstacles. We won’t spoil anything, but you really get to use your imagination here and it’s something that often seems to be missing in games today.

Both characters are committed to stopping the god known as Set. You’ll have to travel and explore desert scorched lands to discover the magical crowns scattered across Egypt to be victorious. Many pitfalls and formidable enemies will be in your way, but with some luck and clever navigating, you might just yet make it to the end.

While the game’s graphics have been spruced up quite nicely, the hiccups found in many of the 3D platformers of this era crop up again at times. Whether it be the occasional awkward camera angle or the rather lengthy distances between save points. Retro gamers will likely not mind these gameplay traits a bit, but those accustom to saving at every opportunity that is often a norm in today’s games, could see these as a particularly challenging or questionable design choices. The platforming is excellent; just don’t misjudge your jumps or sleep on any enemies. The mixture of exploration and light combat offers up a worthy and fun challenge for those fond of or interested in this genre.

Sphinx and the Cursed Mummy brings back the classic platforming and exploration that was so popular during this gaming era. The new visuals give it a great look on the Nintendo Switch and is another excellent fit for the platform. If you can get past the occasional camera issues and large distances between save points, this title offers a great trip back in time where 3D platformers once ruled the land.

Ancient Egyptian mythology comes to life in the Sphinx and the Cursed Mummy. You play the role of Sphinx, a headstrong demigod who travels the world via portals to foil the evil plans of Set.