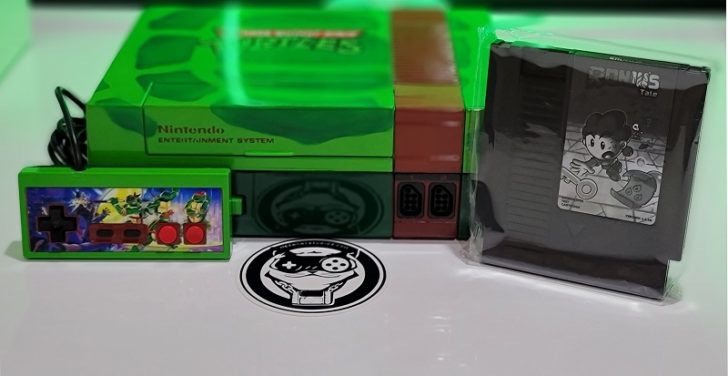 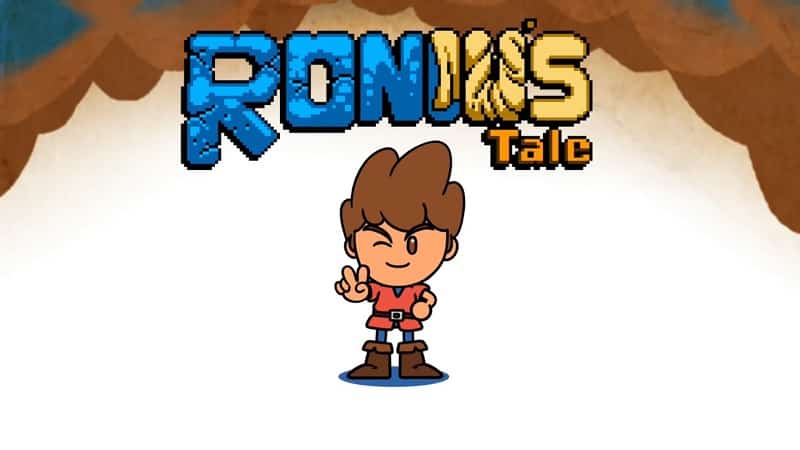 It wouldn’t be summer, without picking up a brand new game for my beloved Nintendo NES.  Many may be wondering how this is possible, as this 8-bit legend was discontinued in 1995.  The great news for collectors and retro gaming enthusiasts, is that it’s still possible to acquire brand new, glorious 8 and 16-bit games to keep that retro gaming collection going strong with new adventures.  All due in part to passionate studios that are still actively producing new games for the NES and many other classic retro consoles.

Mega Cat Studios is the top dog, excuse my language…the Top Cat in this gaming sector.  Their passion is derived from the magic that lit up every local arcade of the ’80s and ’90s eras; and later console ports where many of us found our love for video games.

They develop and manufacture brand new NES 8-bit cartridges, that comes in an old school game box and yes…an actual manual.  It’s probably hard to remember now, but gamers use to get thick, colored highly detailed instructions manuals that were such a joy to read through before jumping into a game.  It was the equivalent of a pre-game show or launch trailer to get you hyped up for what’s to come.  All these things are guaranteed to pull on your favorite retro gamer’s heart strings.

Today, we are going over our first impressions of their latest venture titled “Roniu’s Tale”.  This is a joint effort between Kunjee Studio and Mega Cat Studios, currently active on Kickstarter. 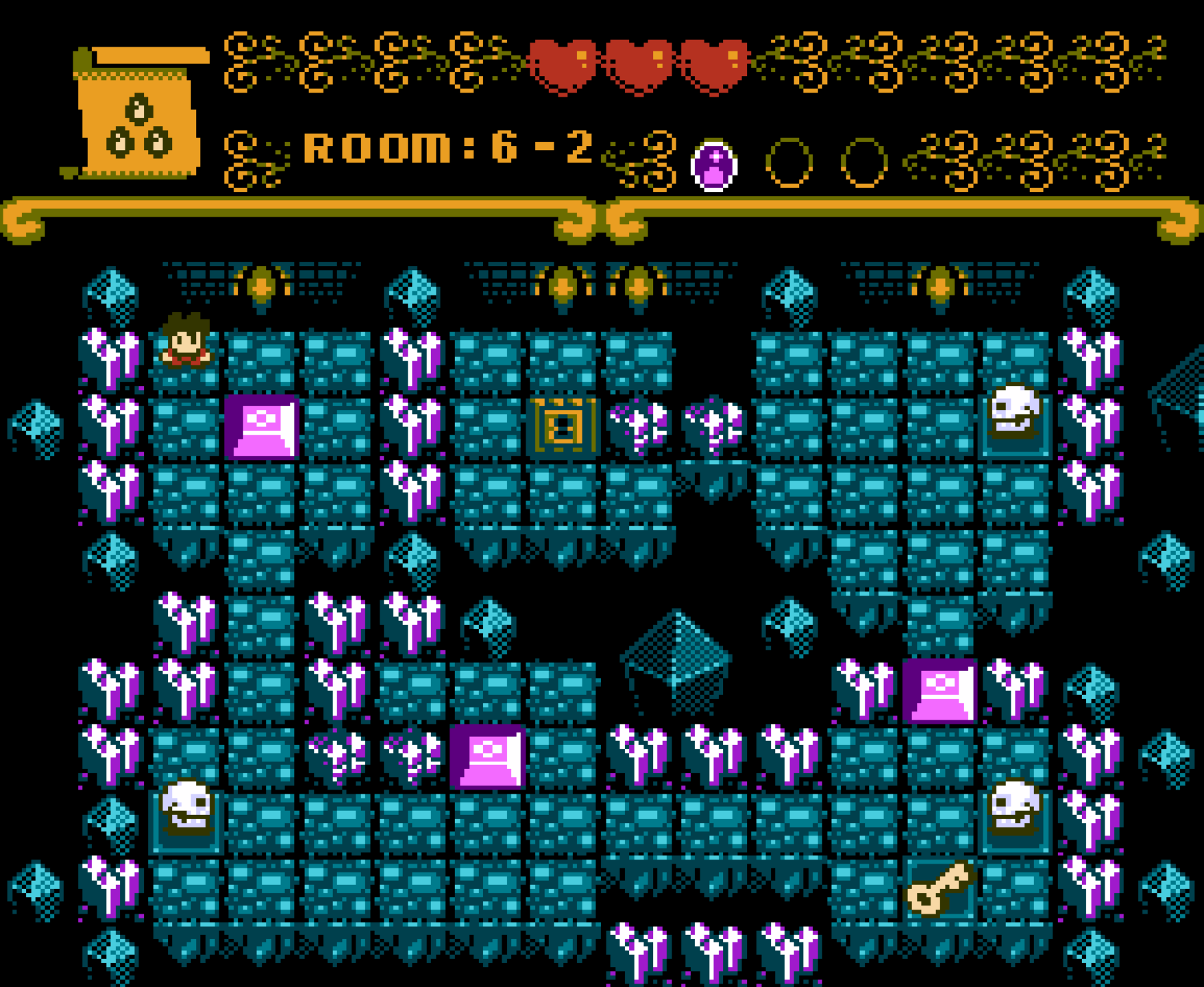 Roniu’s Tale quickly met its financial goals on Kickstarter and has now received nearly 4 times the initial project target (actually fully funded in a mere 6 hours).  After getting some time in with the preview rom, it’s very easy to see why!

Roniu is an adventurous magician and you’ll need to use his powers and your wit to get through each of the 43 levels, located deep within a dungeon.  It uses a top-down view that is perfect for the gameplay style and genre found here.  You first have to figure out how to reach each orb and key; at this point the exit will be unlocked and the next challenge will be getting Roniu safely to that point and onto the next level.  There are several dangers to contend with, including the perilous tiles you walk on; plus dodging all the goblins, worms, ghosts, skulls and skeletons that call this underworld their home.

It’s an addicting and challenging Puzzle Action Adventure.  This one will really make gamers think carefully, as they will have to formulate their plans of escape strategically; all while avoiding deadly pitfalls, barriers and deadly enemies.  It has that classic NES gameplay baked in, that allows players to pick up a controller and just start having fun immediately.

My first attempt lasted all of maybe 15 seconds.  I discovered if you generated enough speed it made it possible to cross one too many tiles (each tile crumbles away as you walk over it), often putting you face-to-face with a wretched ghoul or stuck in a corner with nowhere to go. Roniu however, has some tricks up his sleeve.  He can shoot fireballs, become a ghost and even levitate.  Another neat ability is the power to rewind time, erasing that fatal mistake. 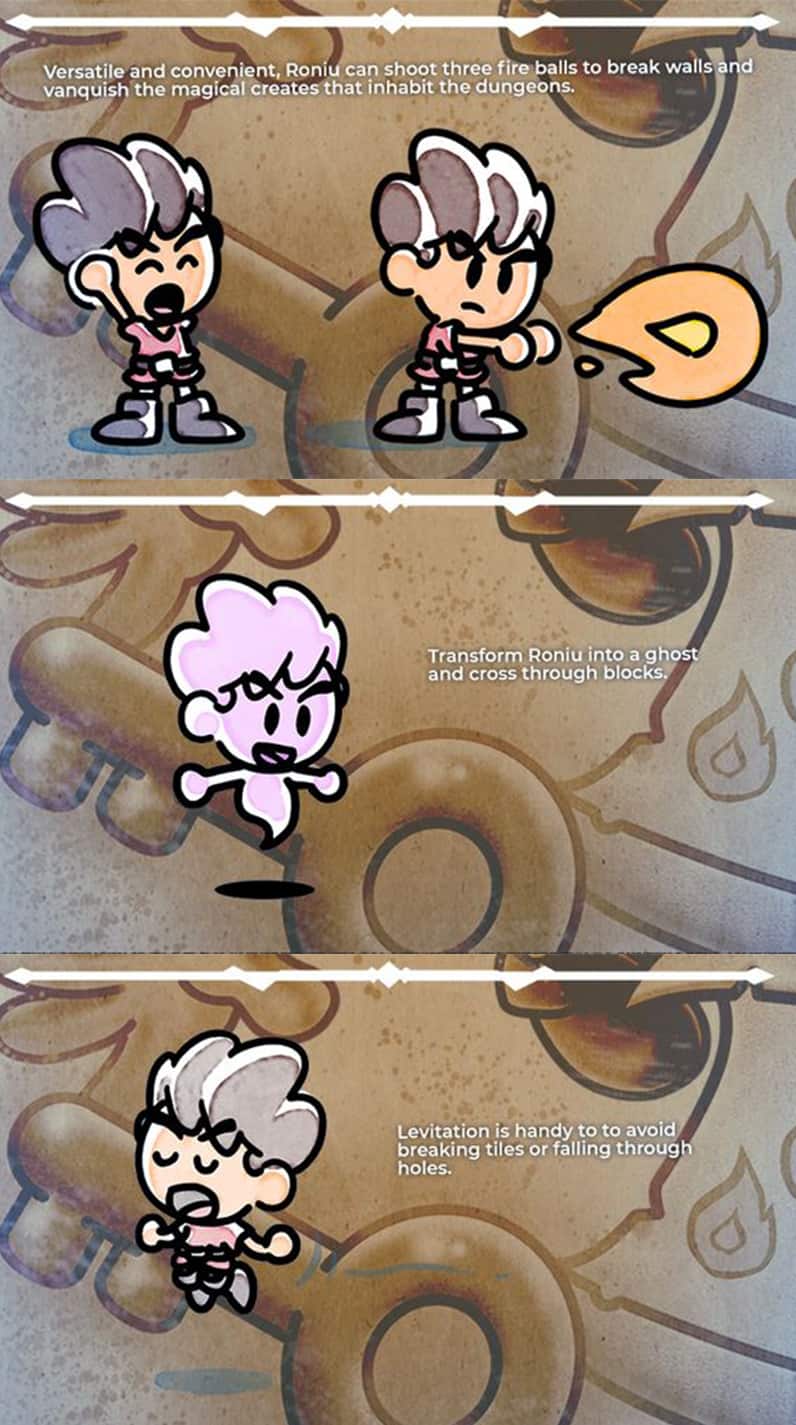 Roniu’s Tale is all about strategic plans of movement, puzzle solving and even some combat sprinkled in for a very engaging experience.  The devs have found that sweet spot of providing excellent depth and immersion, all while not burying the player with mountains of instruction screens, cramped menus and a sheer overload of information to analyze and digest upon starting your adventure.  I can’t be the only person that has nodded off during during unusually long tutorials.

Roniu’s Tale forgoes all that bloat with a couple of beautifully animated pixelated screens, showing players the game’s characters, the controls and a short story to get you up to speed and ready to play! 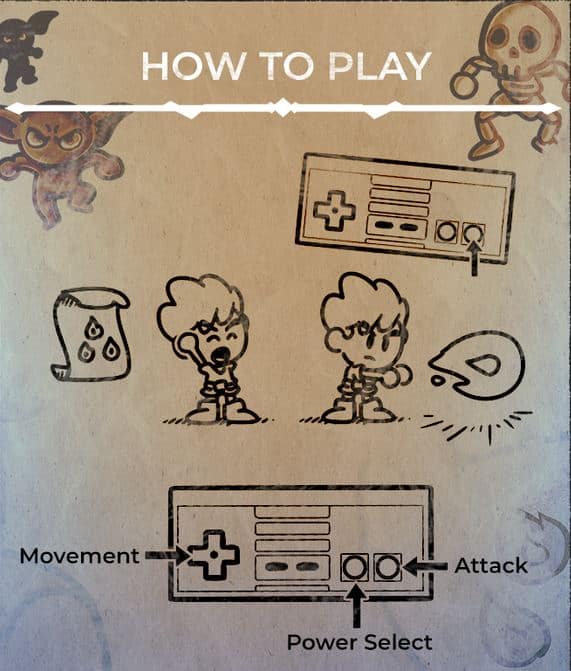 Our introduction to Roniu’s Tale shows tremendous potential.  The gameplay is already impressively balanced and precise, offering excellent challenges on each level.  The graphics, music and overall presentation are top notch.  We absolutely cannot wait to see the final game from Mega Cat Studios and the Kunjee team, as this has all the ingredients in place to be a huge hit with retro gamers, collectors and for anyone that enjoy the Puzzle Action Adventure genre.