The Nintendo Switch keeps the unique experiences coming with RIVE: Ultimate Edition.  It has already been released on the PC, Xbox One and PS4 in 2016.  Originally planned for a debut on the Wii U, it was eventually delayed and saved for a spot on the Switch.  While I’m sure many Wii U owners were disappointed, this was  the best move as the new platform allowed for the best port out there.  It even exceeded the PlayStation 4 in overall performance, delivering 60 frames per second at 1080P.  Quite an impressive accomplishment, no doubt thanks to a lot of hard work and fine tuning by developers Two Tribes and Engine Software. 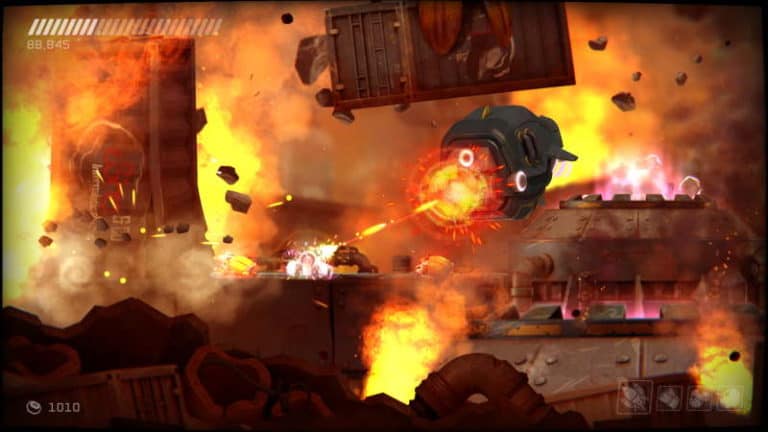 RIVE is a twin-stick shooter where players pilot a starship through a vivid 2D world.  It’s an action packed experience and this Ultimate Edition does not disappoint.  Fans of the SHMUP genre will find a lot to like here.  Gameplay is full of pandemonium at each turn and each level brings substantial challenges.  Gamers will navigate their ship through the air and on the ground.  One area may have players racing through corridors and tunnels with robotic adversaries, where another level will have giant buzzsaws and electricity to dodge.  There is a lot of variety in RIVE and tons of content to keep gamers busy for many hours. 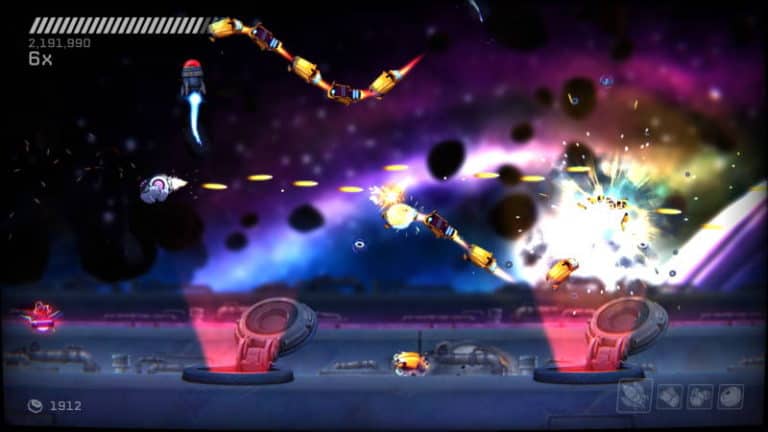 You steer with the left analog and fire your weapons via the right analog.  This control scheme did take me a little while to settle in with, but with that said it’s finely tuned and feels great once you get into the swing of things.  The HD Rumble feature is also worth mentioning as it adds to the overall experience with excellent feedback from every shot and explosion.  As you blast your way through all the enemies that cross your path, they will drop materials that you can use for heavier artillery options.  When you are maneuvering your ship on the ground, players can double jump by pressing the ZL button to get over obstacles and environmental traps.  Certain areas will require you to hack into systems to proceed and this is done by pressing the R button.  This hacking ability can even be used at times against your enemies to take control of them for your benefit. 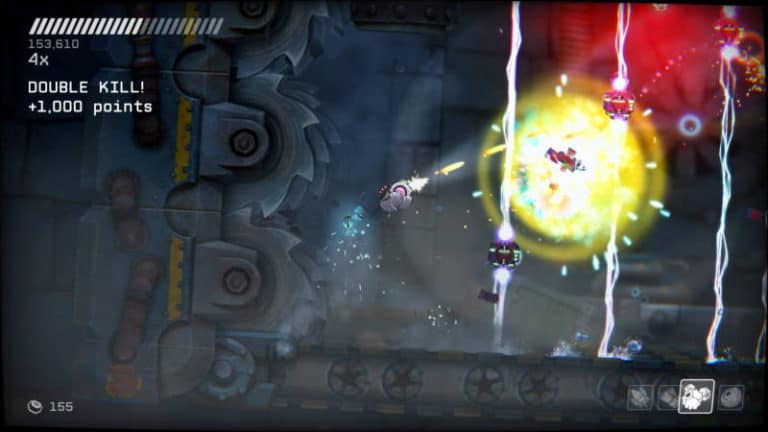 Another exclusive feature found only on the Nintendo Switch is the cooperative play option.  One player is the pilot and the other fires the weapons.  It also swaps roles when you die, allowing both players to have a chance in each role.  This new mode is tons of fun to play with another friend and just adds further value to this impressive port.

Once you finish the thrilling campaign, there are still other modes to check out including Battle Arenas, Speed Runs, Daily Challenges and Online Leaderboards.  RIVE: Ultimate Edition is absolutely the definitive version and one of the finest Shoot ’em ups on any platform this generation.  While it’s positively sad this is Two Tribes last game, they no doubt march off into the sunset on the highest note possible.