Bitmap Books has something very special for all 8-bit Nintendo fans.  This comes in the form of the NES/Famicom: A Visual Compendium.  Relive this thrilling gaming era presented across 500 pages that cover more than 170 iconic NES and Famicom games, fascinating interviews and gorgeous fan art.  Break out the Power Glove, blow those carts off and let’s get to work.

This wonderful console resurrected the entire video game industry from the ashes of the great gaming collapse of the early 80s.  This system, first marketed as a family computer, introduced me to the world of gaming.  The extensive game catalog on the NES ensured I always had a vast selection of titles to choose from at the local movie rental store in town.

The NES/Famicom: A Visual Compendium is yet another example on why Bitmap Books is the king in publishing the highest quality retro gaming hardcovers available.  Each page features lithographic print with sewn binding.  The book is wrapped with a spot varnished dust jacket and cover; plus it is neatly stored away while not in use within a 3mm protective board slipcase with lenticular fascia.  As usual, no expense was spared here folks. 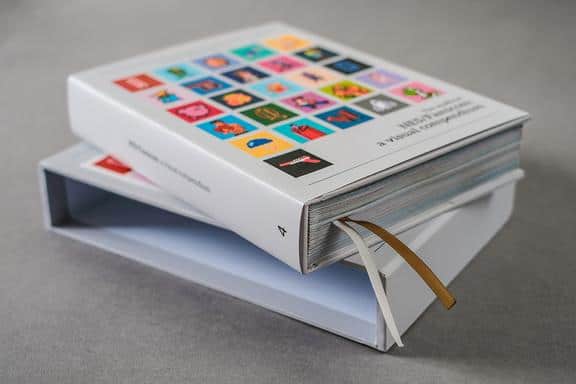 All 512 pages feature immense detail and absolutely vibrant color.  This love letter to the NES covers the gamble Nintendo made during the 80s and how this amazing home console ended up selling over 60 million units worldwide.  It amassed more than 880 games, covering every genre you could possibly think of at the time.  Let’s just say there was something for everyone here to play and enjoy.  Here is one of my favorite brawlers from that era, Double Dragon!  Many a night and weekends were spent playing this cooperatively with friends.

Kevin Bayliss treats readers with a fantastic opening Foreword.  He recalls all the fun times he had with his ZX81 and Commodore 64.  This eventually led him to become a developer on the NES and eventually a office position at Rare Ltd.  He spoke about how the graphics were created back then, using transparent grid paper for 8×8 squares.  The sprites were limited to three colors, but in time developers got around that through the implementation of additional layers via color palettes. 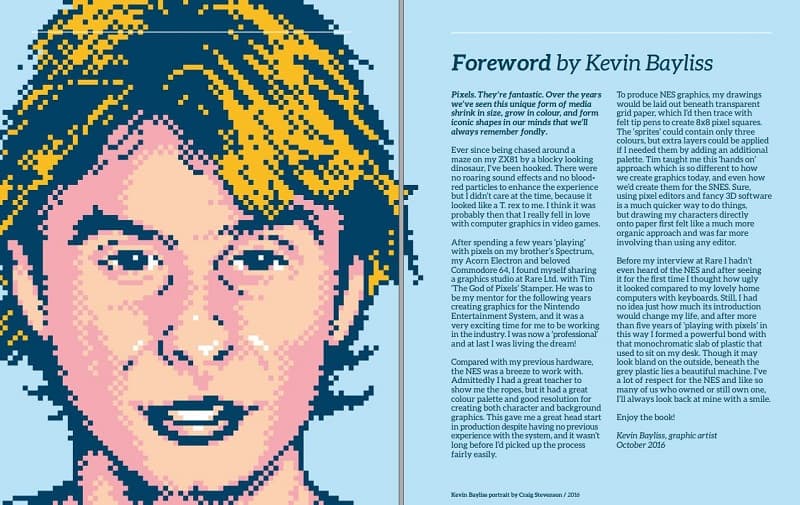 “Kevin also talked about the first time he saw a NES at Rare studios and his first impressions deemed it one unsightly beast; I found this hilarious.”

He later of course grew to love this somewhat generic looking grey box, not only because of the incredible gaming catalog the NES and Famicom eventually claimed, but equally important in that he actually had a helping hand in working on one of the most beloved consoles in history.  We could all be so lucky.

The Biggest Risk is Not taking One

After the excellent foreword, there is an article titled “An Icon is born”.  This section details the year of 1983, when Americans were witnessing an absolute crash in the video game industry.  Atari went from being a baller to being broke.  They made the mistake of completely over saturating the market with software and hardware, which was the leading factor that led to the year video games died.  Little did anyone know, that this gaming hiatus would be short lived and this entertainment medium would soon be bigger and better than ever imagined.

Japan was not seeing this massive decline in gaming and the president of Nintendo, Hiroshi Yamauchi, had big plans in store for gamers.  He was busy formulating a strategy to bring the still thriving arcade experience within this region to everyone’s living room.  On July 15th, their vision for this system became a reality as it launched on the Japanese market alongside a port of the massive hit Donkey Kong. 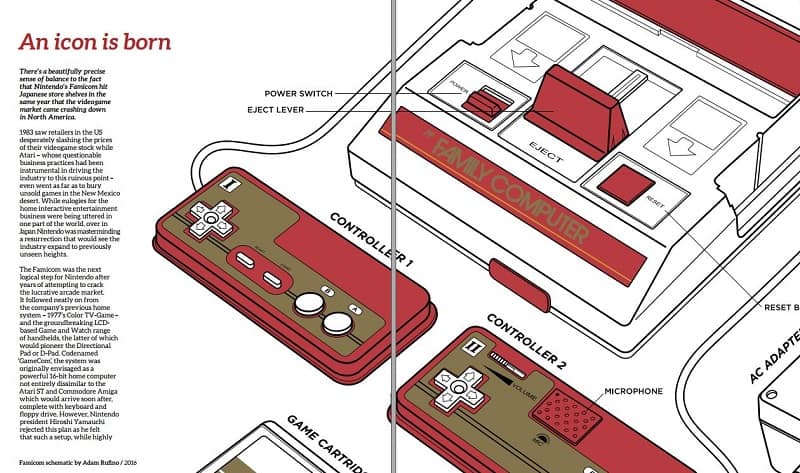 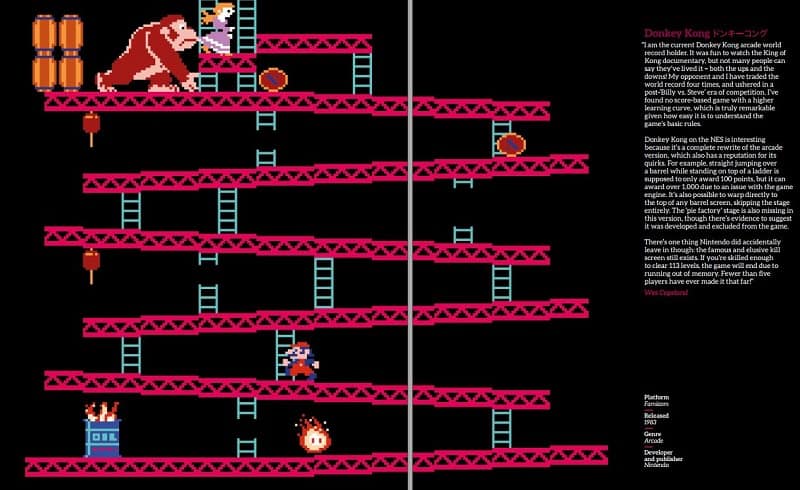 Sales were slow to start and they hit a major wall due to a faulty chipset that required a full recall; yikes!  Amazingly though, this didn’t deter Yamauchi and thanks to his inspiring resolve, they not only got back on their feet but the Famicom was the top gaming console the following year.  Not bad for a company that started out selling playing cards back in 1889.

Huge hits like Final Fantasy and Dragon Quest allowed Nintendo to sell 2.5 million units by 1985.  Having found tremendous success in their homeland, it was now time to expand.  Eyes were fixed on a brand new region, the United States. 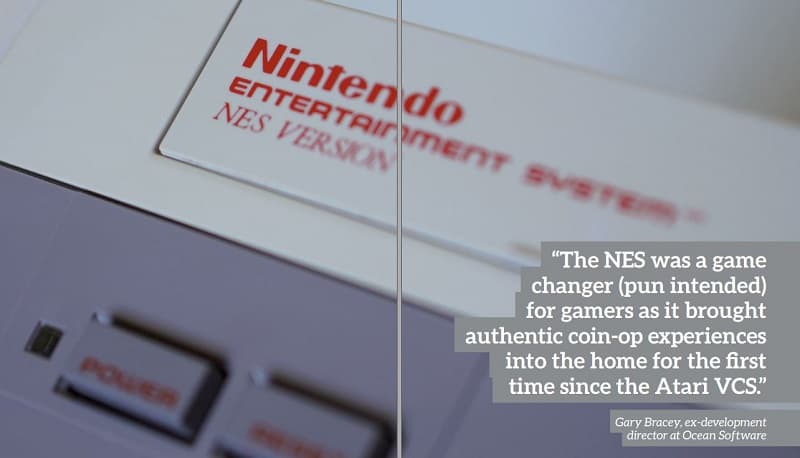 With a firm roadmap in place, Nintendo was confident they could replicate their success over in America. Designers implemented a futuristic look for this model, alongside high tech peripherals that included R.O.B. the robot (robotic operating buddy) and the now iconic light gun zapper that made Duck Hunt an instant hit.  This system was meant to be perceived as a premium product and not simply an electronic toy for kids; as their goal was to target a wide age group and ultimately restore the love many once had for gaming in the US. 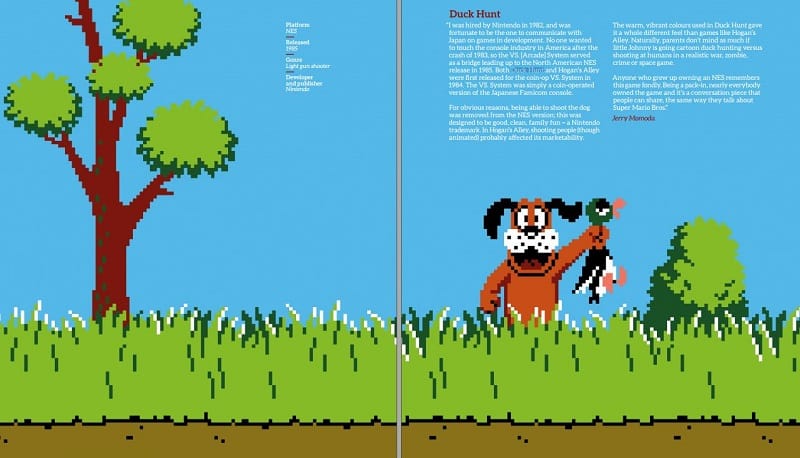 A test launch in 1985 returned mixed reactions.  In 1986, a dramatic shift in positive feedback from critics and storefronts alike began to transpire.  The decision to put playable NES kiosks in stores was a brilliant move.  Potential customers got hands on with Kung-Fu, 10-Yard Fight, Baseball, Ice Climber and a little title you may have heard of called Super Mario Bros. 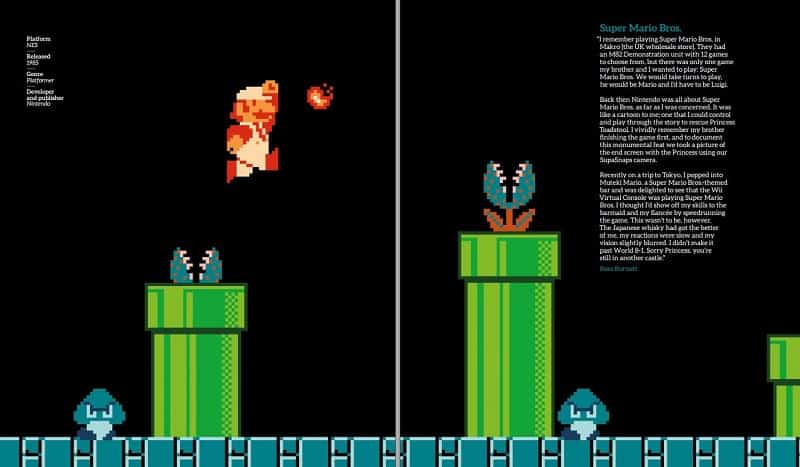 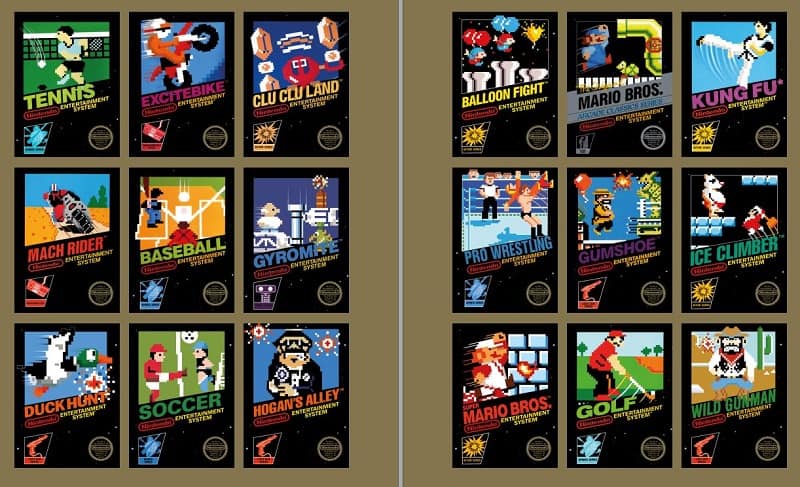 Nintendo’s philosophy for “Quality over Quantity” was born here.  Classics such as The Legend of Zelda, Metroid and Contra enabled the NES to reach historic heights.  Super Mario Bros. 3 is still one of the greatest games of all time in terms of absolute platforming perfection.

This system is still a fan favorite today, with projects such as NESmaker being wildly popular, allowing you to create your very own NES game from scratch and then flash it to a physical cart.  Over 30 years later the love for the NES is as strong as ever.

The Iconic Library and Accessories 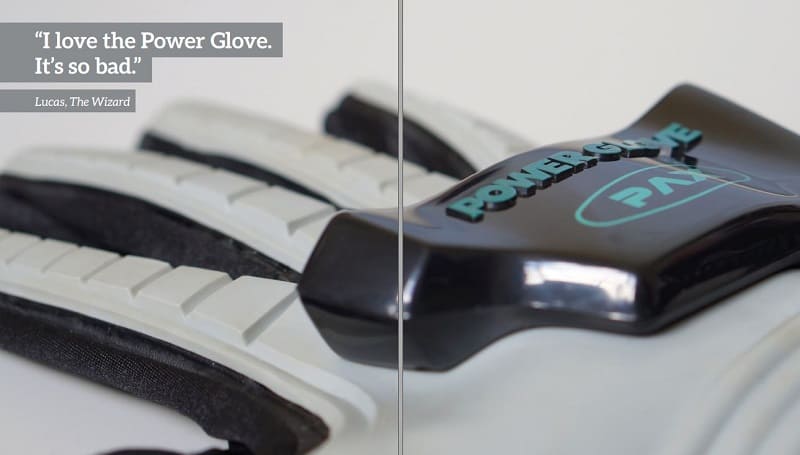 The NES/Famicom: A Visual Compendium covers over 170 NES games which span across a long list of genres.  It also showcases the wild accessories that pushed the technological boundaries for the time.  I have awesome memories on many of the titles featured here and as one would come to expect from Bitmap Books, every page is wonderfully detailed.  Each high gloss page sports bright colorful sprites, perfectly capturing these pixelated 8-bit wonders with loads of facts you likely never knew about your favorite NES games.  Here are but a few of the gems and special features covered in the compendium. 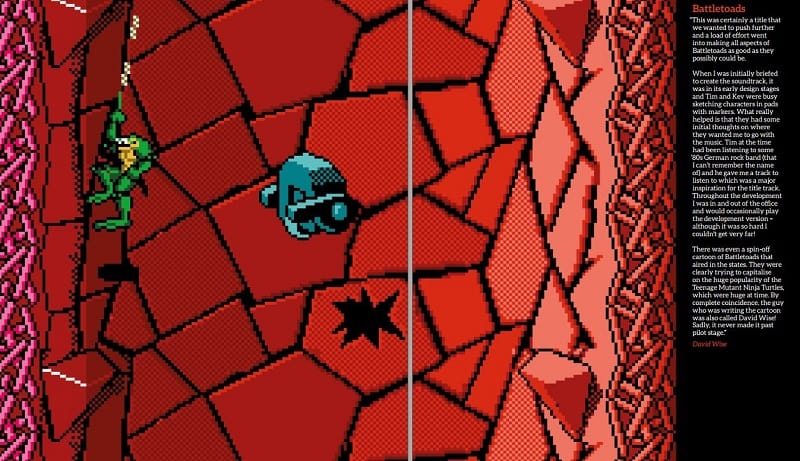 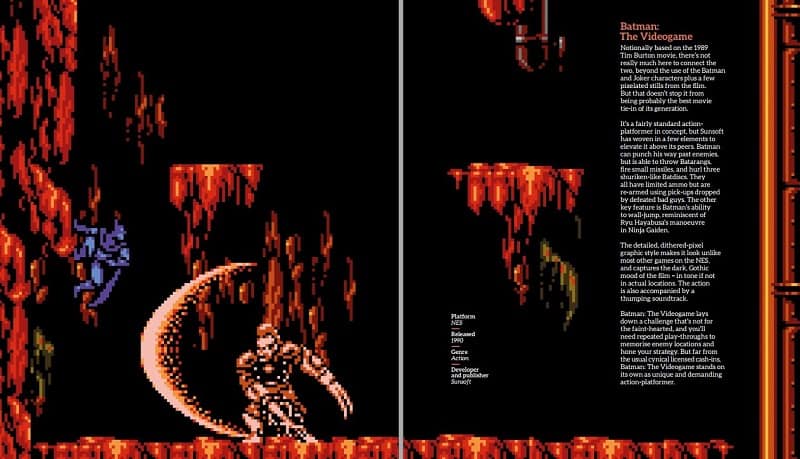 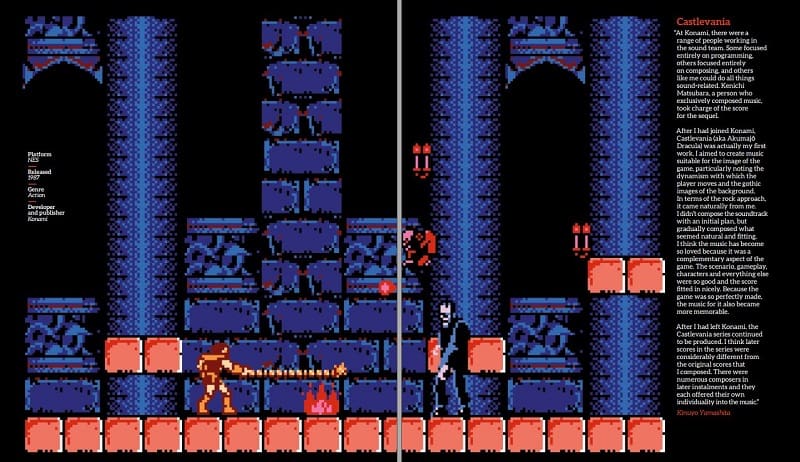 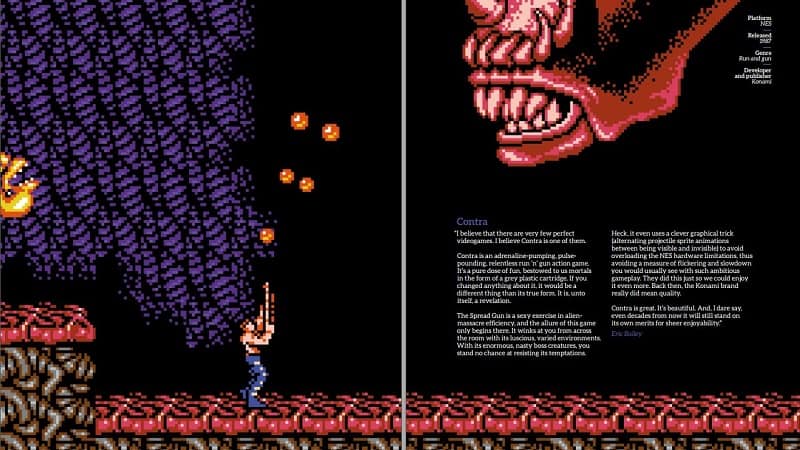 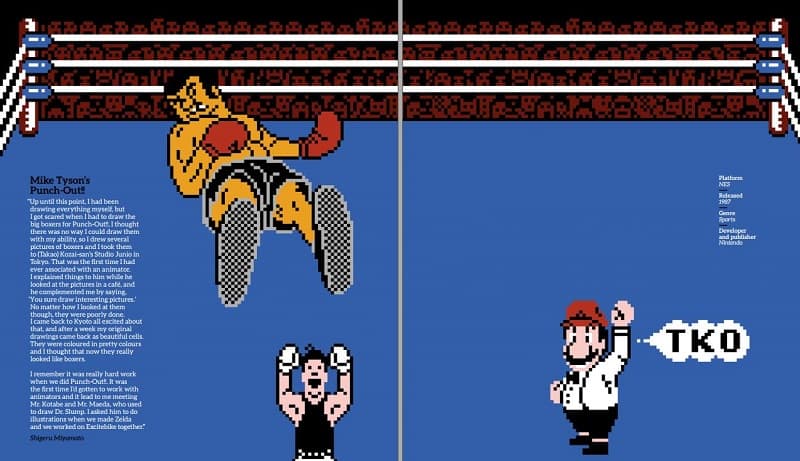 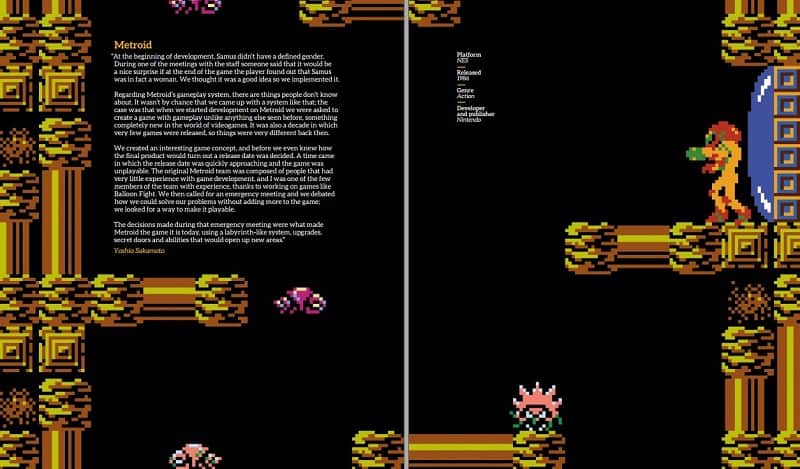 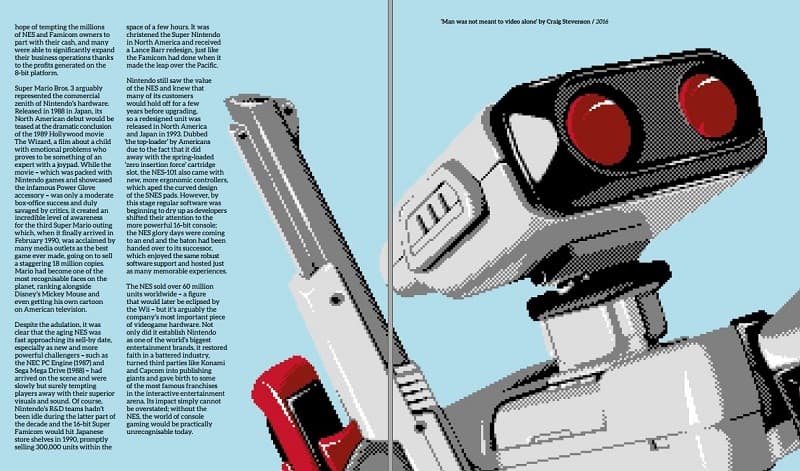 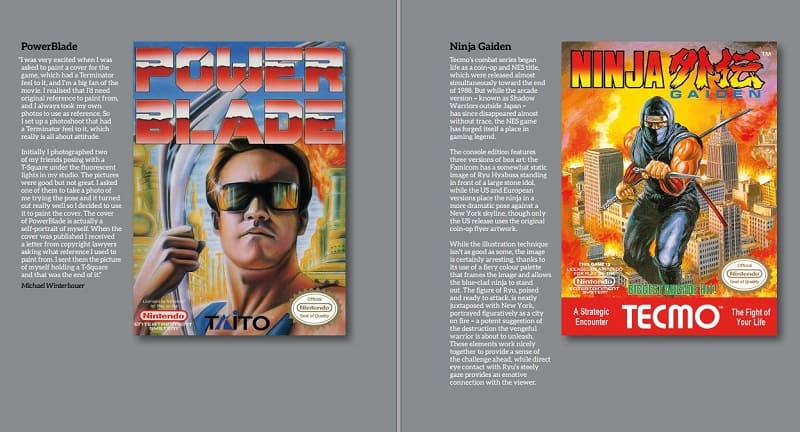 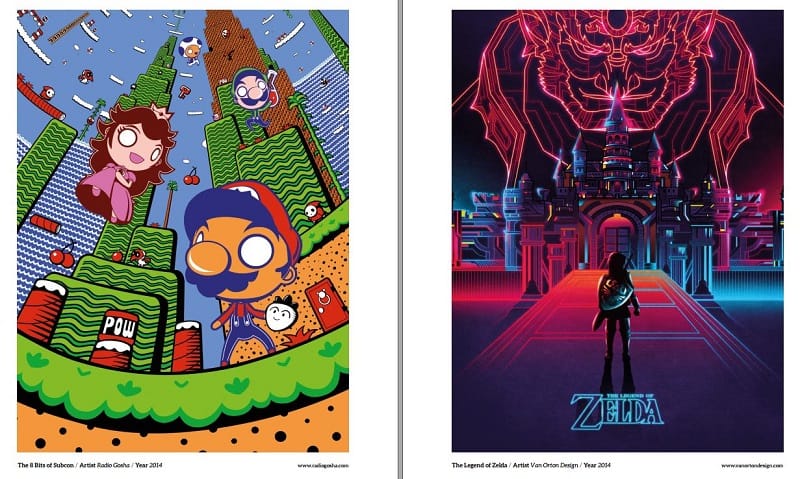 The NES/Famicom: A Visual Compendium by Bitmap Books will be a treasure chest for those that love this absolutely iconic 8-bit console.  During an absolute time of crisis for the gaming industry, Nintendo took an enormous gamble and breathed new life into the video game scene.  The combination of brilliant first party Nintendo classics, truly inventive accessories, arcade ports and impressive third party support resurged this entertainment sector.  That entire journey from start to finish is told beautifully here, where every page is bursting with painstaking detail.  It’s another home run for Bitmap Books and one that belongs in every retro gamers library. 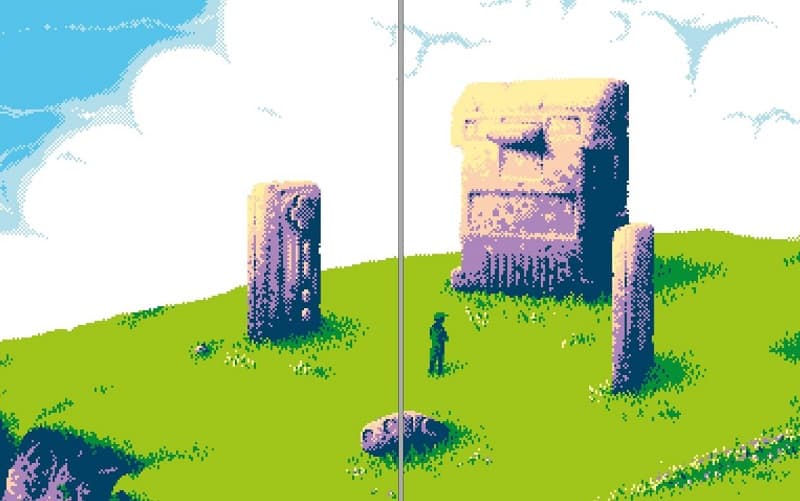 Bitmap Books provided a copy of The NES/Famicom: A Visual Compendium for this Review