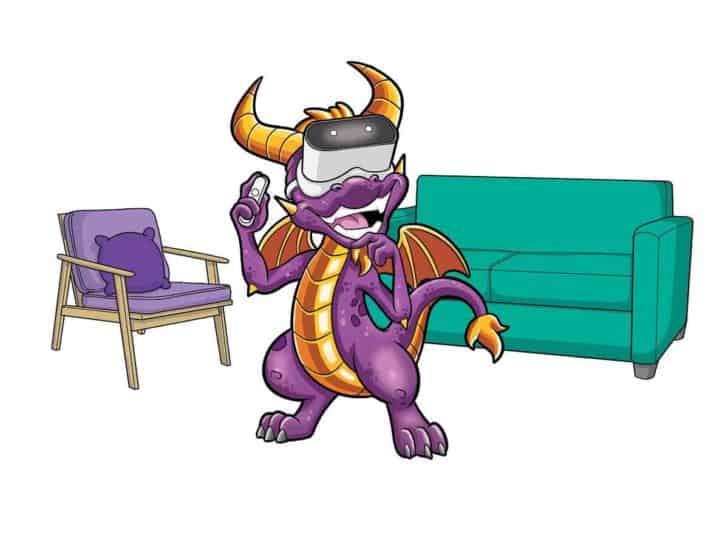 If you look at the Virtual Reality scene today, one thing is evident. This technology has proven it’s far from a fad, as there are now several incredibly capable options available for players wanting to dive into the next dimension of gaming. Today we are looking at one of the first standalone VR headsets on the market, the Lenovo Mirage Solo.

The Evolution of VR 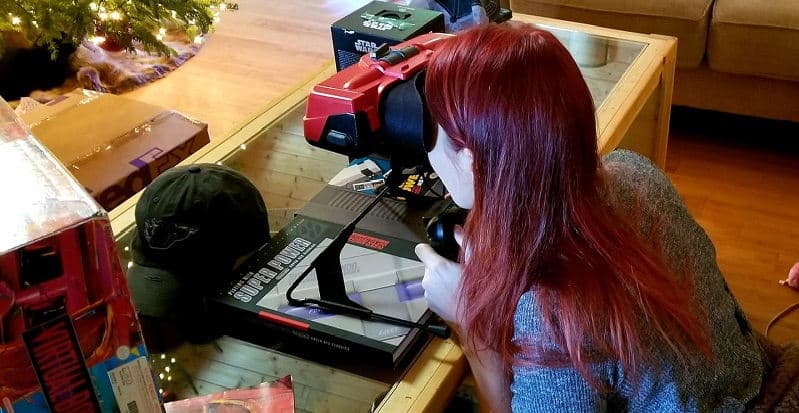 Technology advancement is truly something to behold. The vision of VR was first envisioned and introduced back in 1935. The film Pygmalion’s Spectacles tells the story of how it was possible to venture into a entirely different dimension, simply by looking through a special pair of goggles.

In 1986, Furness developed an advanced flight simulator with 3D maps and helmet tracking capabilities. One year later, British Aerospace worked on similar tech for their virtual cockpit, which they eventually termed “Virtual Reality”.

In the 1990s, NASA got on board and started their own R&D on VR. It wasn’t long after this that Sega and Nintendo jumped on the next big thing for their customer base. Sega’s plans never came to fruition, but Nintendo eventually released the Virtual Boy to the consumer market. Unfortunately, we all know how that ended up due to the red and black color pallete and lack of games.

Eventually though, as technology continued to improve, a resurgence in this advanced sector once again took form.  Whispers of something big coming in the form of VR began to make the rounds.  It was then when we saw the Kickstarter campaign launch for the Oculus Rift in 2012. This model officially kicked off the craze of true Virtual Reality, delivering immersive experiences never before thought possible.

No wires, No PC…No problem 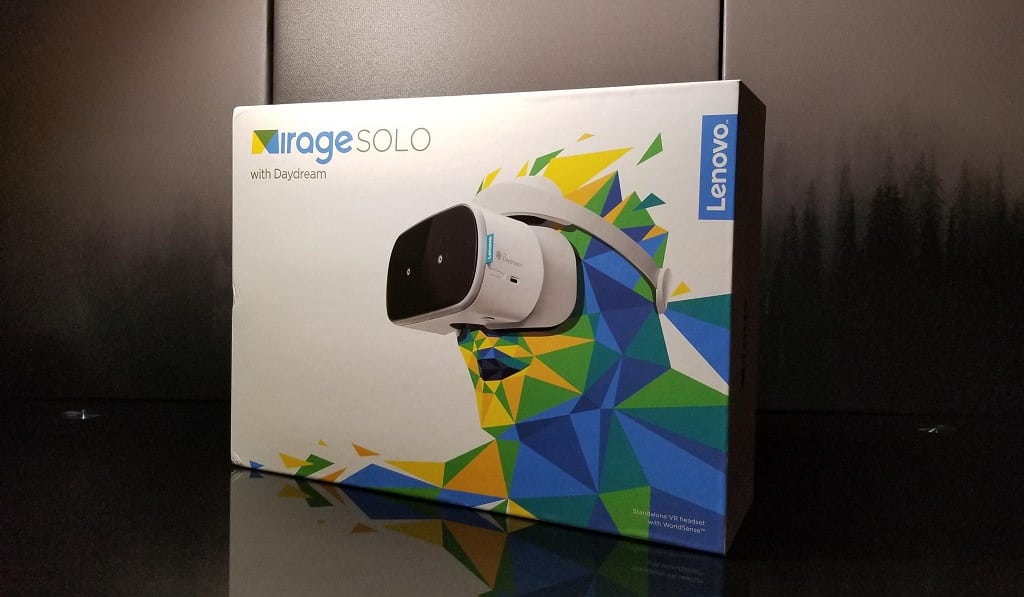 There are a lot of successful VR headsets on the market in 2019. You pretty much have your pick in terms of budget and platform. There has still been one unified gripe, one universal complaint with even the most dedicated purist of VR…the blasted cables and overall setup. There are also several sensors that have to be properly secured for some systems; plus the requirements of a Gaming PC or smartphone powering it, in conjunction with a fairly large and open room needed for it to all work properly.  That’s a lot to invest in and for many, just too much of a commitment to simply try out VR.

“This is where Lenovo, Android and Google got together to bring something very exciting to the market.” 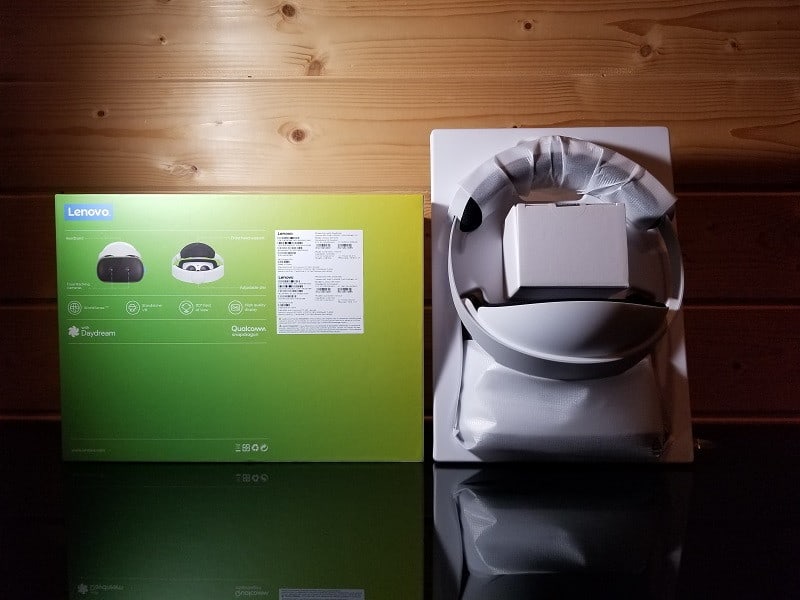 Other manufacturers have done a similar mobile approach in creating headsets where you snap in a compatible smartphone. This was a cool way to introduce yourself to VR at a very affordable price, but again it wasn’t something that ever really took off.

Lenovo knew that gamers wanted more performance, improved comfort and didn’t want to be hassled with having to use their smartphone every time they wanted to enjoy VR. To be successful, this needed to be a true plug and play, standalone solution. Serious R&D went into the Mirage Solo. Lenovo had 14 revisions of this model until they were ultimately satisfied. The typical product model revision process for them is 3-4.  The team in place for the project didn’t want this VR headset to be great…they insisted it be exceptional. 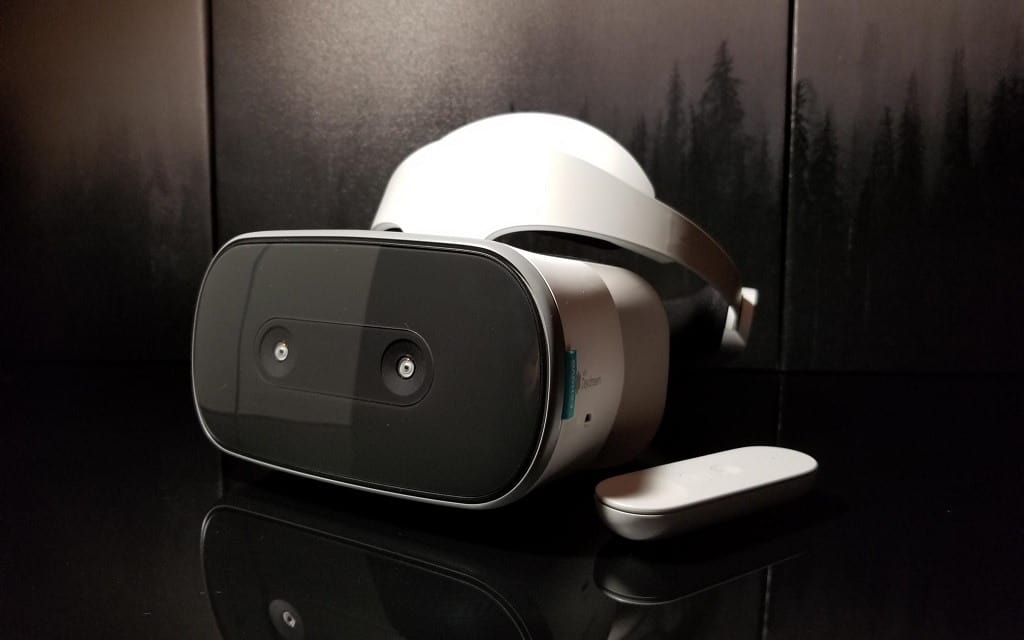 Upon release, the Mirage Solo sits at 1.4 pounds. While it’s heavier than some of its competitors, the clever design and use of excellent build materials such as high quality foam around the lenses and polyurethane in place for the frame make it very comfortable. It has a nice sleek look, sporting a white matte finish with solid buttons and adjustment knobs for snug fitment.

Lenovo needed a strong partner to compete in this realm.  They enlisted Google for the software side of their headset. This OS is known as Daydream. With that platform in place and the design dialed in, they could now put all of their focus into hardware performance. They knew that the display quality and tracking capability was crucial components in reaching their initial vision for this project.

Powering the Mirage Solo is the 10-nanometer Qualcomm Snapdragon 835. It’s a highly competent mobile chip featuring 3 billion transistors and is smaller than a penny. Its improvements include a 25% in 3D performance, 4K video support and possibly most important six degrees of VR motion tracking. It has also been overclocked, targeting power similar to the Google Pixel 2.

The next challenge for the Mirage Solo was getting an excellent display at an affordable price. OLED was out of the question for their proposed price point. Lenovo went with a custom 5.5″ inch LCD display that has a refresh rate of 75Hz made possible through the help from Google. They managed to accomplish a 110 degree FOV, a 16:9 aspect ratio and a resolution of 1280×1440. 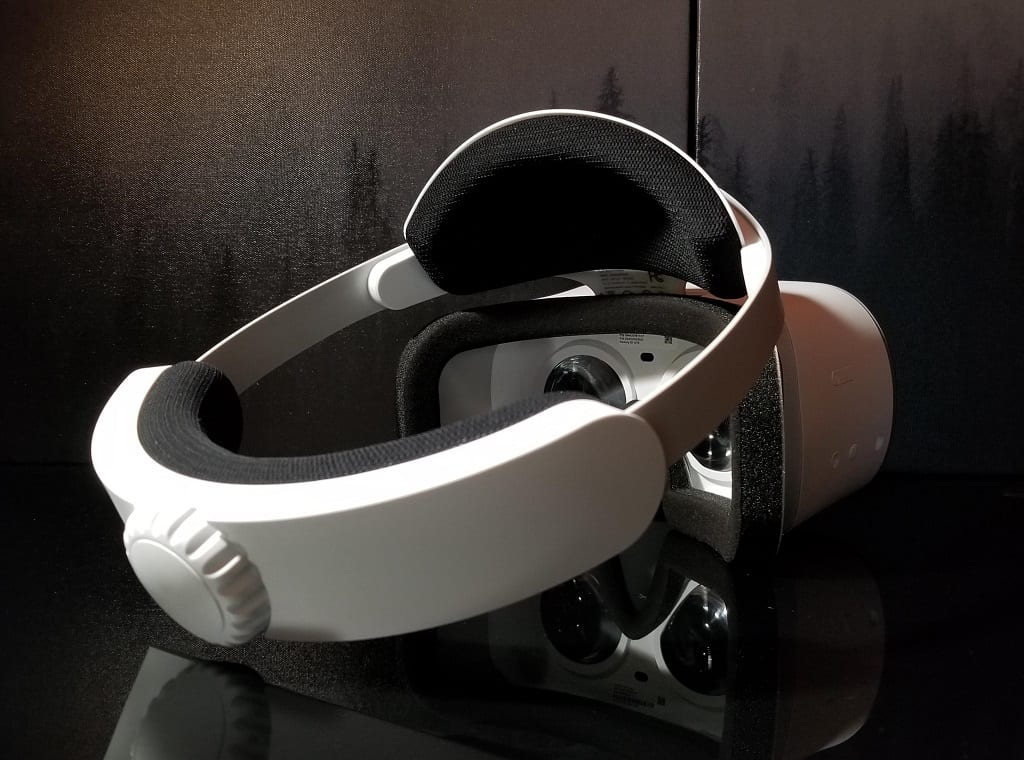 The front cameras were also an area where Google played a key role. WorldSense powers the tracking technology for the Mirage Solo and it does a fantastic job. The headset also houses a gyroscope, accelerometer, and magnetometer for increased precision.  My eyes seemed to adjust and focus far easier than on the higher priced PSVR.  It also offered superior tracking to Sony’s offering, allowing players 360 degrees of uninterrupted movement.

Now that we have covered everything that powers the Mirage Solo, it’s time to discuss how it performs. It is seriously comfortable in spite of being a littler heftier than some of its competitors.  The massive amount of R&D that went into correctly balancing the unit has seriously payed off.  You’ll still likely wish to take a break around the 1 hour mark, but that is typically recommended when playing in VR. The Mirage Solo comes with the Daydream controller for navigating through apps and playing games. It’s a fairly simple yet solid device.  It has a circular touchpad (that can be pressed for inputs), complete with Home and Back buttons; plus volume presets on the right side.  One limitation to be aware of is that the headset will only actively track the orientation of the controller and not the actual position.  The power button is found on the right side of the unit.  Below that are additional volume controls and a 3.5mm input for headphones (white earbuds included). 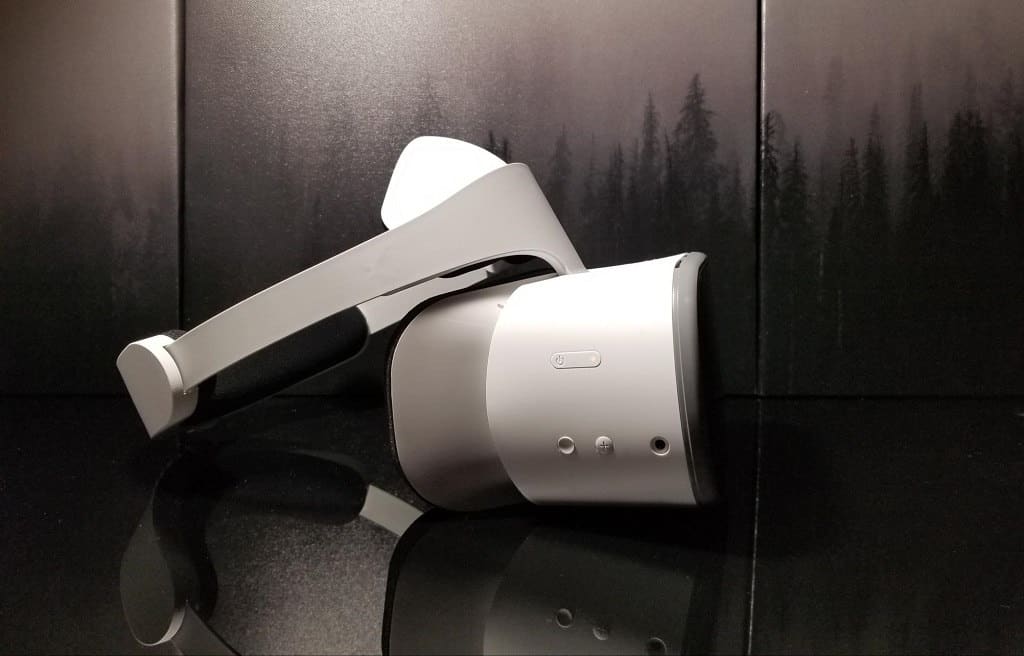 The Mirage Solo has 4GB of RAM and there is 64GB of internal storage. Lenovo has also included a microSD card slot for expanded memory. Battery life is impressive, capable of lasting close to 3 hours.  It also houses a USB-C port on the side for charging (power cable and adapter are included).  The external storage will no doubt come in handy as there are currently over 250 Daydream apps to interact with. 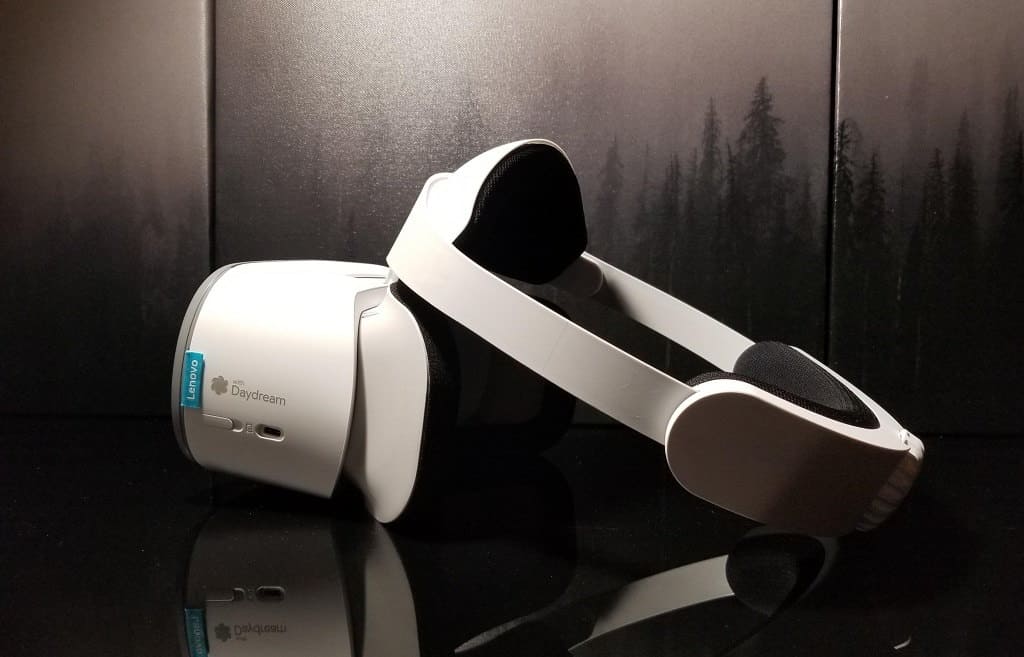 Daydream has a healthy list of games and apps to choose from.  Game wise there are first person shooters, action puzzles, RPGs, action adventures, racers and more. We really enjoyed Death Horizon VR, Blade Runner: Revelations, GunJack 2: End of Shift, Need for Speed No Limits and Hunters Gate.  BBC Earth: Life in VR is a must for this device.  You’ll get to travel all over the planet and interact with a wide range of creatures.  Being able to move, lean, duck and completely turn around at any point without the burden of attached wires is a gamechanger.  While the lower refresh rate and lack of OLED screens might be noticeable to those who have experienced the more expensive options on the market, the majority will find the gaming performance solid and enjoyable; especially when you factor in its mobility and ease of use.

Since this is Google based, there are also a number of excellent apps to enjoy.  It’s pretty awesome to watch movies on Netflix and Plex, as you can make the screen as large as you want and also position it to your liking.  This provides a movie theater like experience, especially when combined with a high end audio headset.  The YouTube App is solid as well, as there are many VR compatible videos with a 360 degree perspective.  One of the first videos I checked out was the IT: FLOAT – A Cinematic VR Experience.  This immediately sold me on how VR completely changes what’s possible on YouTube.

Lenovo also recently updated the ability to enable their pass-through mode, which can be turned on by accessing the Beta Feature settings menu.  This mode is activated once the headset senses you are out of the allotted gaming zone perimeter.  It will then allow you to see your true surroundings through the front two cameras.  This opens up the door for Augmented Reality experiences.  I hope we will soon see that explored and implemented in upcoming games and apps.

Need for Speed No Limits

Virtual reality has forever changed the gaming landscape.  Constant advances in the VR realm, combined with partnerships with technology giants within the industry is what made the Lenovo Mirage Solo possible.  Gamers will no longer need their smartphone, PC, sensors and the rat nest of wires that accompany most VR systems.  Granted, you’ll have to give up some processing power and advanced controller tracking features from the far more expensive options available, but in return you’ll get a phenomenal standalone wireless VR headset that has been developed and powered by the incredibly talented teams at Lenovo, Google and Android.  That’s quite the dream team and the results speak for themselves.