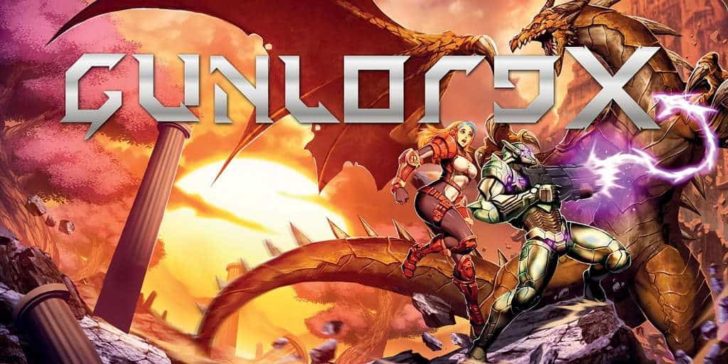 Gunlord first hit the scene on the SNK Neo-Geo. It also saw a release on the Sege Dreamcast. With the massive amount of steady releases on the Nintendo E-shop, this one initially snuck under our radar. After seeing some coverage on this new Nintendo Switch port, I simply had to have it and to say it didn’t disappoint is a massive understatement.

Gunlord X feels, looks and sounds like it came straight from the glorious 16-bit era. It is a tour de force, reminiscent of Contra and Turrican. The visuals explode with color and style. The sprite work and backgrounds look phenomenal across all 11 stages. Another neat trick in place for maximum eye candy is parallax scrolling. All of this frantic action is locked in at 60 frames per second (docked and on the go). There are screen effects available as well, such as scanlines for that old school CRT look that purists will really enjoy.

There is a wide variety of scenery and locations across the stages in Gunlord X. Players will run through alien infested worlds, treacherous factories and even fly through the sky “R-type” style, similar to your favorite shoot ’em up. Several powerups enable better weapons and finding them can be a gamechanger for effectively dealing with large clusters of enemies. Experimienting with each powerup is also crucial for boss battles. The first few areas of the game are not too tough, but the difficulty quickly ramps us with each new mission and area. Thank God for autosaves and more importantly unlimited continues.

These different weapon types can be switched at anytime, enabling players to be strategic in their use. At all times you also have a laser beam that is capable of 360 degrees of damage. It’s incredibly helpful with taking out turrets on the ceiling and any projectiles that are headed your way. Lastly you can curl up in a ball in order to access certain areas and you can also drop bombs as you go; decimating any enemies that are in the blast radius. The action is seamless, fluid and tremendously polished.

“At this point I was thinking, this game has it all”

I’m not done gloating just yet. The game’s soundtrack is one of the best I’ve heard this year. Composer Rafael Dyll delivers one incredible tune after another which make the on-screen action that much more intense and enjoyable. I would love to own the OST just by itself if available, as it really is that excellent. It’s really difficult for me to find anything negative about this title. Some may find the later stages a bit too challenging, but that can hardly be counted against the game in my opinion. With practice and determination comes success. Defeating each level and boss delivers a strong sense of accomplishment.

Gunlord X is a re-envisioning of the 2D Run ‘n’ Gun shooters that stole our hearts as kids; blasting alien scum and defeating monstrous bosses on the Super Nintendo and Sega Genesis late into the night. Developer NG:DEV.TEAM has crafted this latest enhanced port with the utmost care. The authenticity of the glorious 16-bit era is felt in every moment of this game and it’s a must have for the Nintendo Switch.

The critically acclaimed platform action game Gunlord developed by NGDEV in 2012 comes back to the Switch in 2019. The game received an intense "Hi-Bit" overhaul for modern game consoles in a widescreen format.