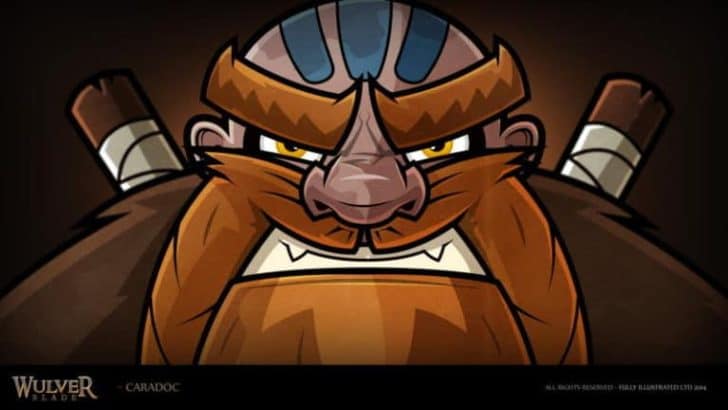 Wulverblade is a gorgeous 2D brawler by Darkwind Media.  It hearkens back to the retro beat ‘em up titles like Streets of Rage, Final Fight and Golden Axe.  It has some impressive visuals and carries that old school difficulty along with it.

The game consists of 8 challenging stages.  It can be tackled solo or with a friend through 2 player co-op.  The levels are bursting with color and vibrant visuals.  It’s as if a comic book has come to life with beautifully animated graphics.  It looks and runs phenomenally on the Nintendo Switch; and I couldn’t imagine a better suited platform to play Wulverblade on.  You will hack and slash your way through tough, determined enemies.  Blood and limbs will fly in spectacular fashion as you advance through each gorgeous level.  Wulverblade is quite easy to pickup, but difficult to master.  A common trait from retro titles that is becoming more popular these days, as many gamers are finding that harder games can also be more rewarding. 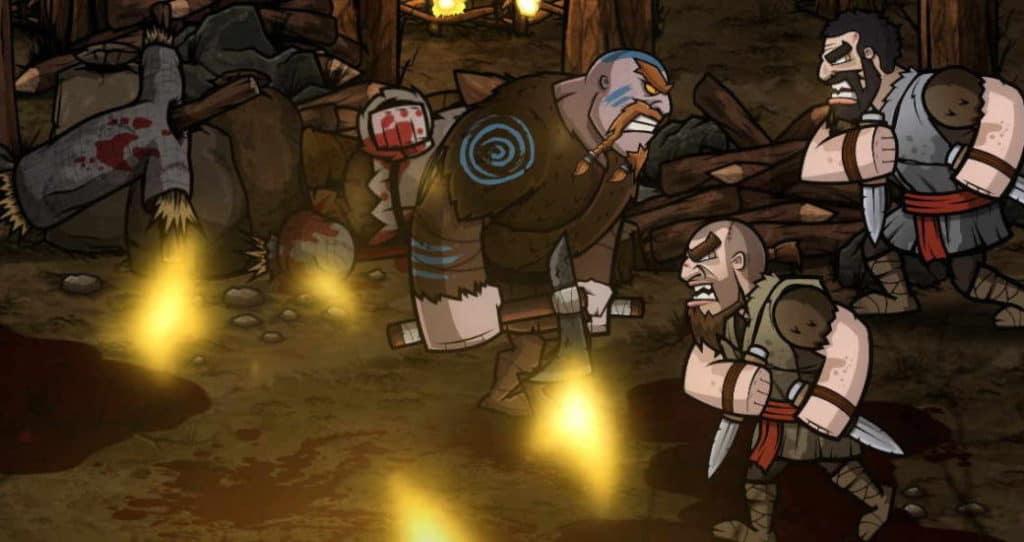 Players will fight for the northern homeland as one of three fearless warriors, including: Caradoc (a well rounded and balanced warrior) , Brennus (The strongest warrior but also the slowest) or Guinevere (the fastest of the three, but falls short in brute strength).  Each one has their specific strengths and weaknesses, it’s up to you to choose which character bests fits your gameplay style.  I found Caradoc to be my favorite of the three and utilized his well rounded abilities for the campaign. 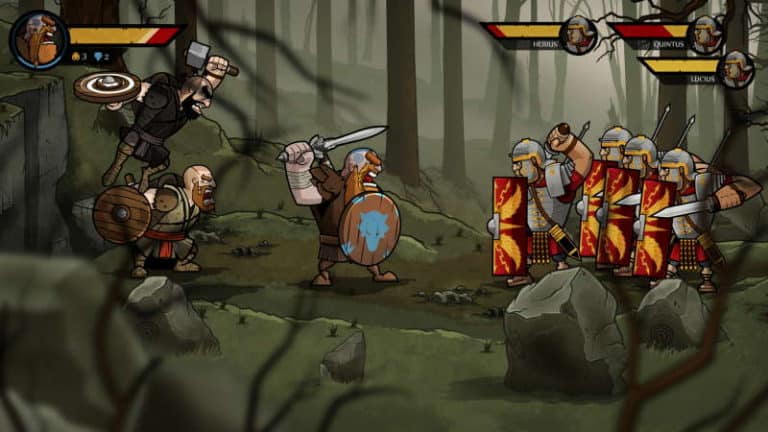 Players will taking on the legion of Rome with nothing but cold steel and brute determination.  You’ll be fighting to restore peace to your homeland and Britain itself.  Darkwind Media has crafted an incredible story for Wulverblade, rich in lore and detail.  Its presentation is outstanding and looks brilliant on the 6.2 inch screen.  I was really impressed with the sharp, gorgeous visuals, all while running perfectly smooth from one battle to the next.  The way the backgrounds and landscapes of the British Isles flow through each level is stunning to behold.  The forests, wildlife and silhouettes are a true work of art. 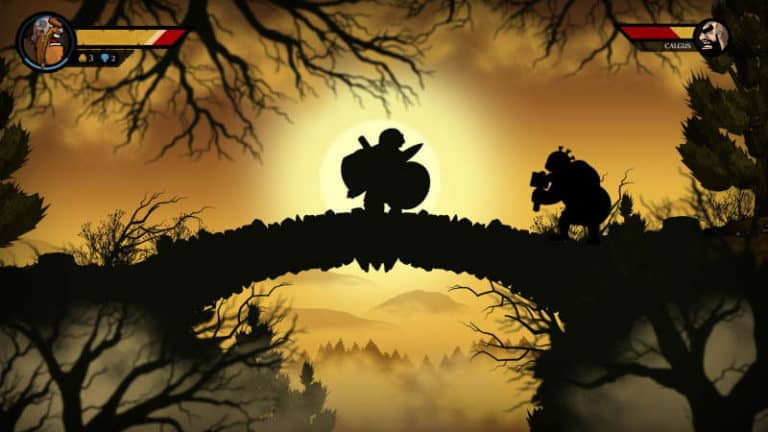 It’s essential to utilize your shield.  You can block attacks, use it to break the guard of your enemies, or evade damage by rolling forward or backwards.  The double jump ability is another great tool for your arsenal.  As you hit the jump button a second time, you’ll spin and can cut any nearby enemies.  If you hold down and hit attack, you can strike the ground with a strong blow (great for finishing off a downed opponent).  You can charge your enemy and ram them to help clear some room when needed.  Utilizing the same charge, you can strike with a strong upward sword strike that is fantastic for knocking down enemies.  As your opposition closes in, you can grab them and either toss or headbutt them.  If you time it right, you can throw an enemy into a larger group and knock them down.  Limbs that come off can actually be thrown as well.  There is a blue bar that once filled up, allows you to go into Rage Mode, which is very handy during boss fights or for crowd control.  Pressing the jump and attack button simultaneously performs a special move, but comes at the cost of a little health.  Last but not least, once per stage you can call your loyal wolf pack in to clean house by holding down ZR and pressing attack or jump.  Fallen enemies will leave their weapons and it’s crucial to pick up anything that can give you an edge.  This includes daggers, spears, broad swords and spiked clubs.  Each one can get you that closer to victory, so don’t pass these up.

“Gamers who miss playing side-scrolling brawlers like those released in the ‘80s and early ‘90s will lose their heads over Wulverblade (pun intended),” says Brian Johnstone, co-founder of Darkwind Media and lead programmer on Wulverblade. “The game has that twitchy, instant gratification feel often associated with arcade classics – and it plays like a dream in co-op. What else could you ask for?”

I agree with Brian in this short, but concise summary of Wulverblade.  As soon as you pick it up, you’ll be able to notice it was crafted with care and certainly was influenced by some of the best beat ’em ups of all time. As you progress, the difficulty rises and really puts your skills to the test.  It’s never unfair, but be prepared for some seriously challenging gameplay. 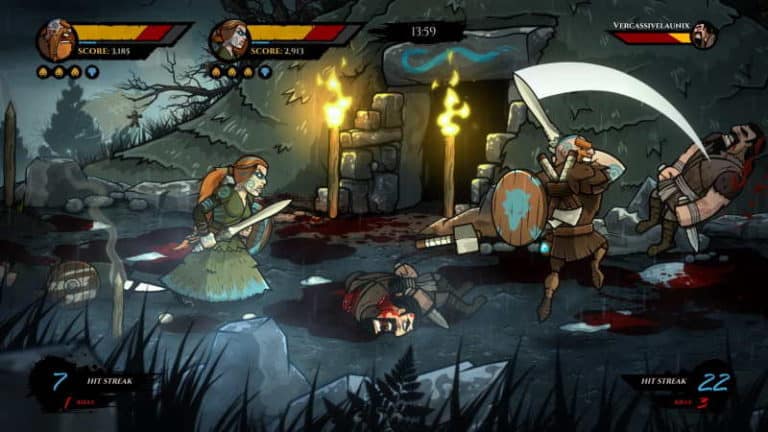 I recommend starting on Normal mode.  This will give you checkpoints and unlimited continues.  If you are up for it, Arcade mode consists of 3 lives per play through and a maximum of 3 continues.   Fighting the good fight with a friend is both fun and helps to even the odds.  Each player can use one of the Joy-Con controllers, making it incredibly convenient to engage in some action packed local co-op.  Wulverblade makes great use of the Nintendo Switch and its unique assets, while setting the bar high for the beat ’em up genre.  It may be too tough for some, but the wealth of content and outstanding presentation gives players an incredible experience well worth the effort.

Wulverblade is a visceral, cinematic, side scrolling beatem-up, bringing a modern twist to the classic gameplay style of the 1990's arcade scene.