Bitmap Books is quickly building an astonishing collection of high quality hardback books that cover all the beloved games from the most iconic gaming systems from the 80s and 90s.  We just wrapped up covering their wonderful book on the Sega Master System.  Now it’s time to jump ship to the competitors side and behold what’s in store for Nintendo fans with the SNES Pixel Book.  I have a feeling it’s going to be pretty rad just from the cover alone. 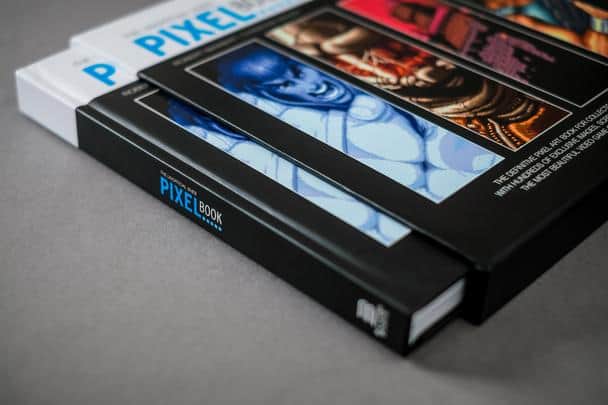 Bitmap Books and German publisher, Elektrospieler, has teamed up to produce this epic celebration of one of Nintendo’s greatest consoles of all time…the Super Nintendo.  The SNES Pixel Book is packed with 272 pages of the greatest games found on this iconic system.  In typical Bitmap Books fashion, it comes with a spot-varnished cover, brilliantly detailed lithographic print, sewn binding and a protective board slipcase to keep your hardback pristine for years to come.  The first few pages introduce you to the “Pixel Professionals”, including Thomas, Robert, Chrissy and their furry friend Ayumi.  You’ll learn how each of them contributed to this sensational love letter to the SNES and the legendary game library that accompanied it.

The SNES Pixel Book is broken down into genres, but in a very meticulous manner with additional factors to help categorize this staggering game collection.  This includes the key elements that truly stood out in each game and what made them special; or even genre defining in many cases.  This breaks down to the following: 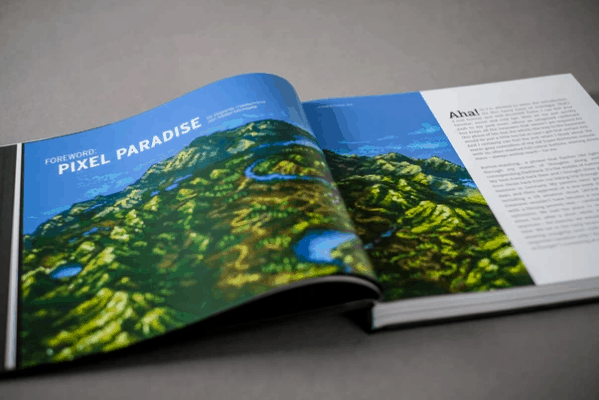 Next up is an insightful Foreword by Jan Müller-Michaelis titled “Pixel Paradise”.   Here you’ll read how this era and particularly the Super Nintendo impacted Jan’s childhood and life in general.  It’s about how this wonderful thing called nostalgia that affects us all, but often times in completely different ways.  It is a fantastic introduction and one that properly sets the tone for the greatness that awaits within this book.

Turn the page and now the real fun begins.  This section features gorgeous artwork from LucasArts, Capcom and Konami.  The games showcased here are Space Warfare, Super Ghouls’n Ghosts and Super Castlevania IV.  The pixels and sprites come to life on each page, bursting with vivid color and astounding detail. 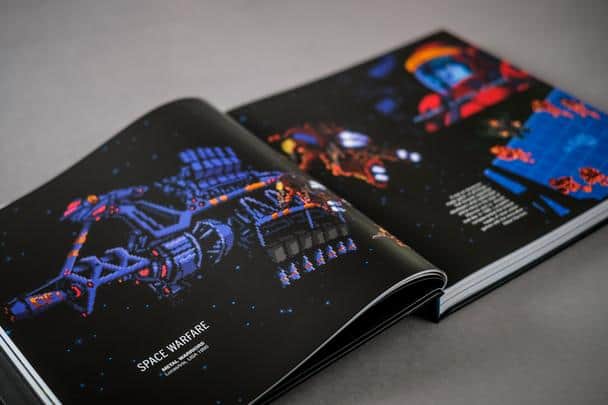 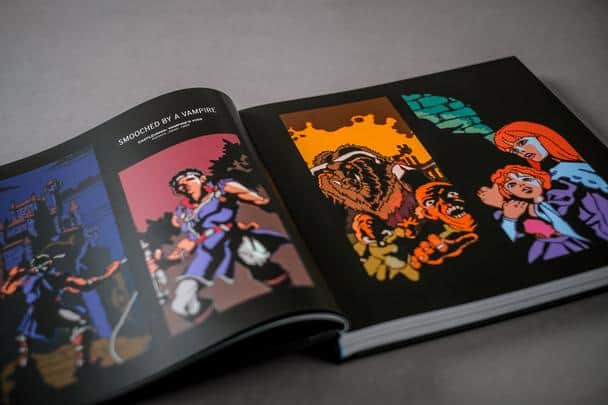 The Super Nintendo produced some of the finest Action-Adventure and RPG games of the 16-bit era.  In this section,  you’ll start things off properly…with no other than Zelda.  Where would the gaming industry be without this historic franchise?

I was home sick from school one day with a bad cold, when my father surprised me with The Legend of Zelda on the NES.  I knew just from the shiny gold cartridge this was something really special.  What I didn’t realize at the time is that it would become one of my favorite game’s and series to this very day!

Fast forward to 1991 and The Legend of Zelda: A Link to the Past was released.  This was indeed, a genre defining game that is still even influencing games today.  The game’s unique perspective, real time combat vs the typical turn-based for RPGs and the ability to interact with so many objects within the world of Hyrule, made it an unforgettable adventure.  It also featured one of the best soundtracks you’ll hear on the SNES, which was composed and produced by Koji Kondo. 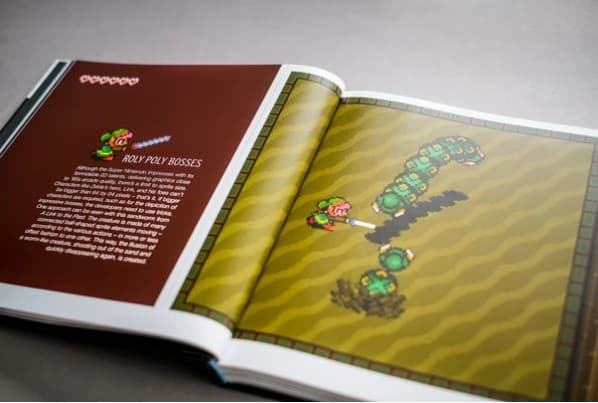 Other classics that fall under the Zelda influence of this era are covered, such as Secret of Mana, Soul Blazer and Terranigma.  It dives into their semi-open worlds, daunting dungeons and Mode 7 effects exclusive to the Super Nintendo.  Each of these encompassed incredibly detailed worlds, where some levels showcased vivid, vibrant color; while other sections pushed the hardware to its limits for giant towering bosses.  Some titles took inspiration from all of the above, such as Legend of the Mystical Ninja.  It used Zelda’s perspective at times, but also implemented classic platforming for certain sections of the game.  Point ‘N’ Click games were even taking cues from A Link to the Past, with games like Young Merlin by Virgin Interactive. 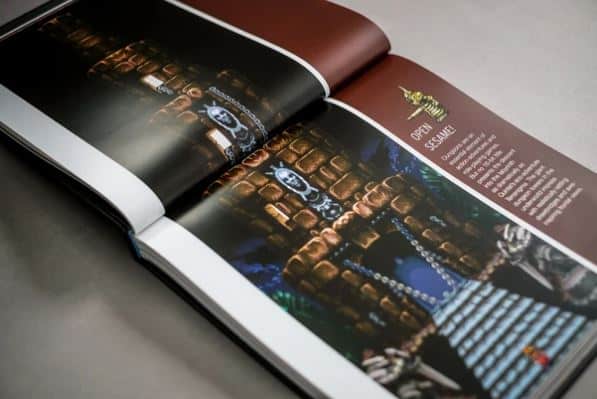 Many would argue that the Dragon Quest series had just as powerful of an influence as Zelda on not only the 16-bit era, but to games being developed to even this day.  This eventually brought the style of turn based Japanese RPGs to the masses.  Dragon Quest VI included a thrilling story and cutting edge graphics that was even daring to posture up against the ever popular and iconic Final Fantasy franchise.  It was unfortunately only available on the Super Famicom.  The good news is though, that the massive success achieved by Dragon Quest spawned several amazing SNES titles that would borrow and take many key elements from this brilliant Japanese RPG.  The includes some serious fan favorites such as Chrono Trigger, FF III, Breath of Fire I and II, Super Mario RGP, Lufia and the Fortress of Doom and of course who could leave out…Earthbound! 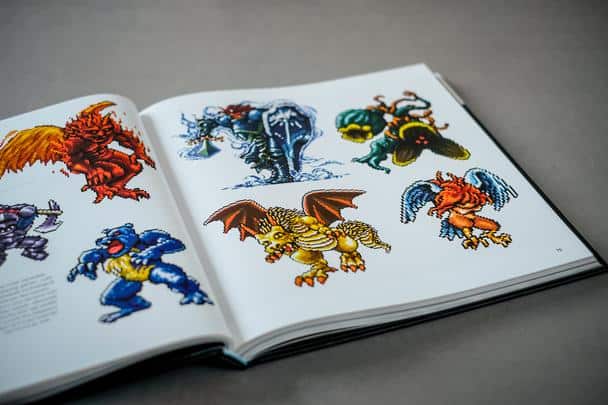 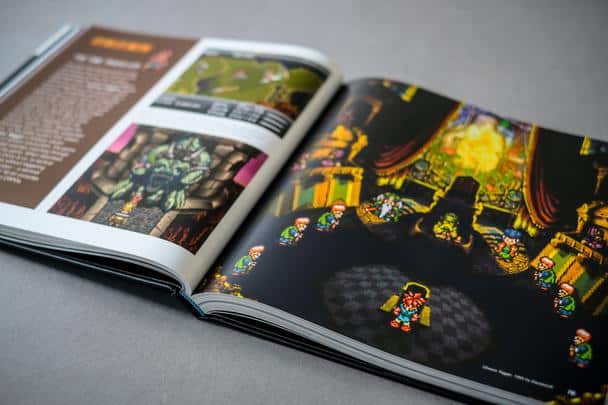 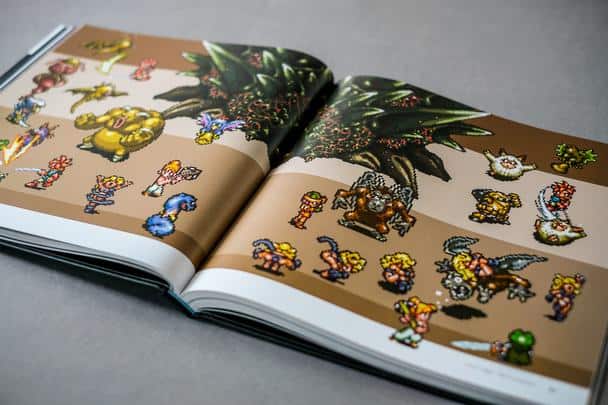 My first time seeing a Super Nintendo in action was with Super Mario World.  I was absolutely floored at what was taking place on the TV screen.  It was like a Saturday morning cartoon, bursting with color and incredible detail.  The animations were stunning at the time.  Mario now has a cape, several new moves and had apparently befriended a delightful green dino named Yoshi.  Big Boo makes his first appearance here and King Bowser awaits you at the end for an epic battle that shows off all the impressive tech the SNES is capable of.

Super Mario World was soon the template or roadmap for many SNES developers in creating the perfect platformer.  It was simply a masterpiece in every way and others certainly wanted to see the same success.  Its massive stardom lead the way for many other wildly impressive platformers such as Aladdin, Lion King, Tiny Toon Adventures, The Magical Quest: starring Mickey Mouse, Pinnocio, Donkey Kong Country and an unexpected hit…Cool Spot. 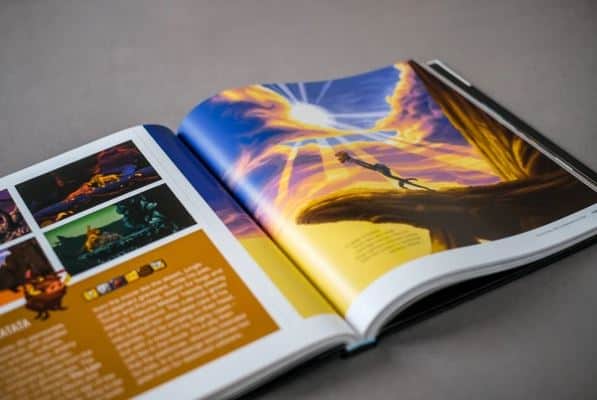 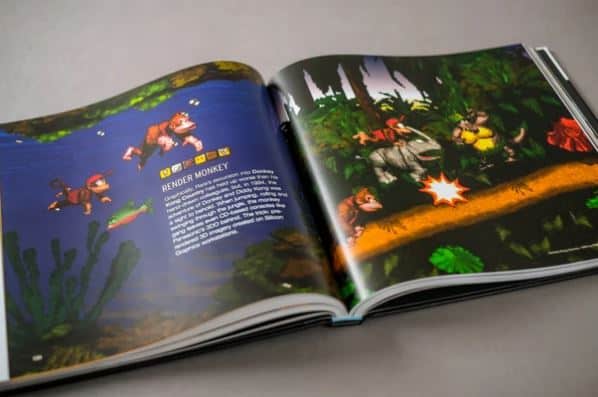 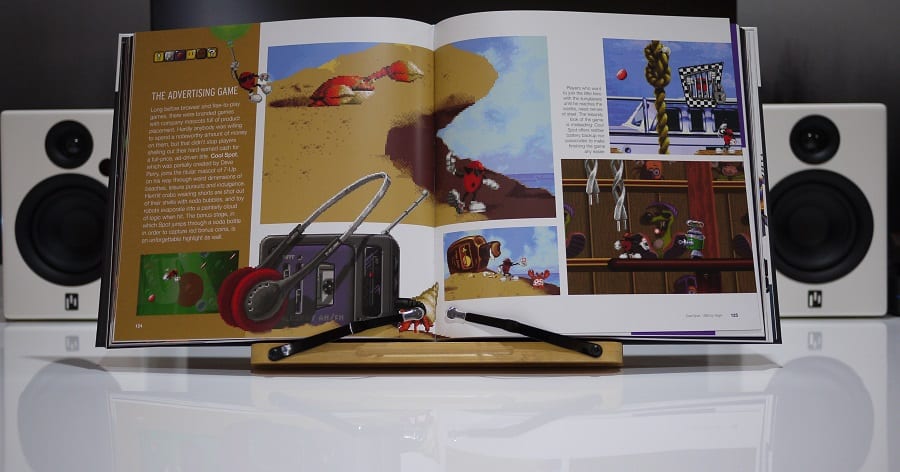 For this section of the book, it details games that focused on combining platforming with gunfire and combat.  Are you thinking what I’m thinking…Contra III: The Alien Wars!  What a cinematic explosive game, which is still brilliant to play through today and just as punishing as the year it was released.  Maybe you were more into the friendly blue robot known as Mega Man, AKA Rockman in Japan.  Mega Man X was a massive hit on the SNES.  It was created from the ground up for their 16-bit beast.  It was faster paced and more action oriented.  The art style and absolutely brilliant sprite work is still stunning to behold today. 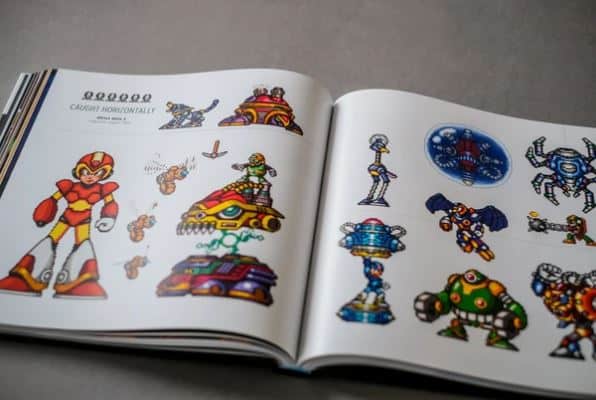 The hits keep on coming with Super Ghouls ‘n Ghosts, one of the most difficult games to master on the system.  Super Star Wars was another favorite that I have wonderful memories of at Christmas.  It stayed true to the movies and featured tense light saber battles, speeder bikes chases, and X-Wing missions with SNES exclusive Mode 7 technology. 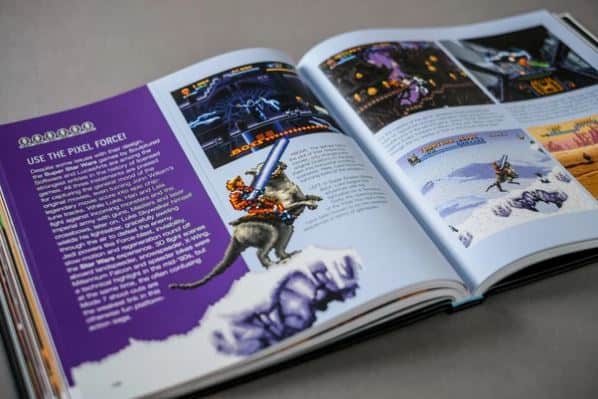 “Do we have any Simon Belmont fans here?  What a ridiculous question, of course we do!  Castlevania fans were in for a real treat with Super Castlevania IV.  It is one of my favorite games…of all time.”

The music, the artwork, the boss fights…they were all masterfully executed and to this day it is my favorite game of the iconic Konami series by a large margin.  If that wasn’t enough, gamers also got Dracula X four years later.  It was a very stylish entry with comic drawn graphics and impressive special effects.

If vampires wasn’t your jam, how about a game starring a earthworm sporing a spacesuit?  I can only imagine pitching this game to investors and witnessing their confused expressions.  I’m sure glad Earthworm Jim got funded and approved, because this outlandish title was an enormous hit and quickly gathered a cult following. 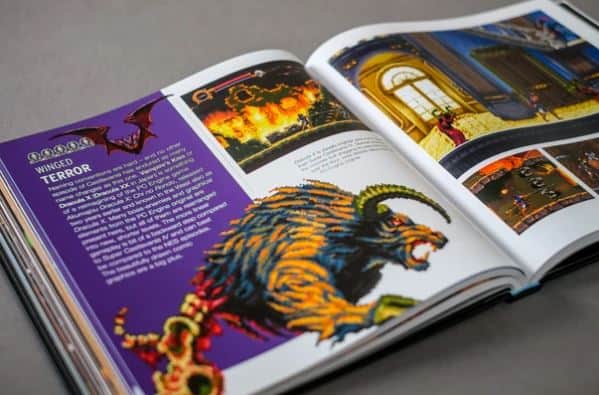 This era also gave birth to a genre that is arguably more popular now than ever…Metroidvania.  Of course I’m referring to Super Metroid on the SNES.  Players were dropped onto a mysterious alien planet where the protagonist Samus Aran had to explore every area, solve puzzles and acquire certain abilities to progress further in the game.  Areas that were blocked or seemed impossible to traverse at one point, were now accessible due to discovering new skills.  It was truly atmospheric and won the hearts of many, making it one of Nintendo’s most popular franchises.

Another standout that was unlike anything before it was Flashback.  The gameplay mechanics and unique visuals made this one of the most cinematic adventures of its time.  Players are forced to make time sensitive decisions where there is only one action or direct solution to the threat at hand.  Failure to figure this out ends in death.  It was punishing, but like many difficult games, incredibly rewarding and exciting once you solve the riddle and make it out alive. 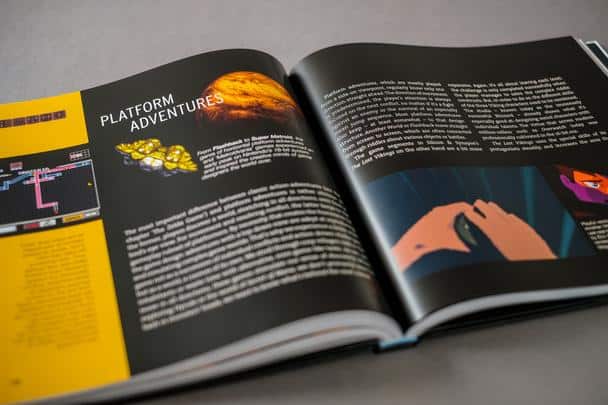 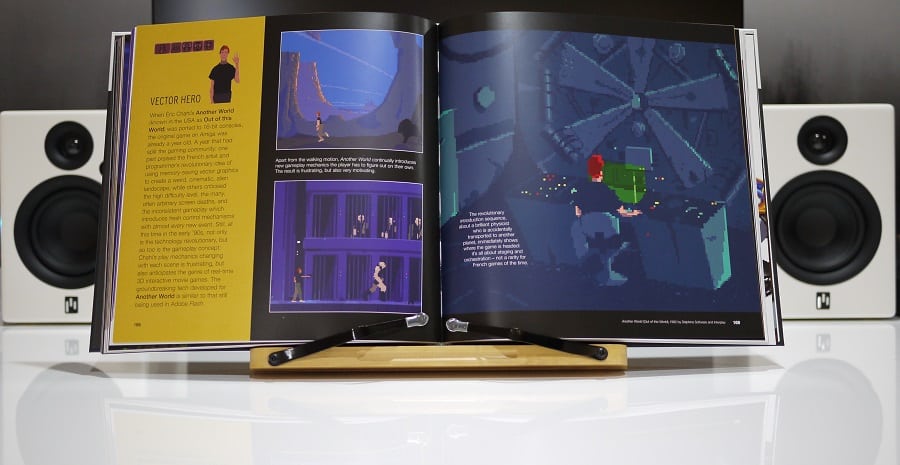 Lots of games on the SNES featured serious firepower, bright lasers, spaceships and what we now refer to as SHMUPS (Shoot ’em ups).  Some were arcade ports such as Gradius III.  Others space shooters came in the form of brand new IPs that would take the world by storm like Star Fox, utilizing the Super FX chip for its out of this world visuals. Another featured game in this section is one of my wife’s favorites,  Zombies Ate My Neighbors.  It was highly addictive, extremely comical and offered one of the most unique co-op experiences on the SNES. 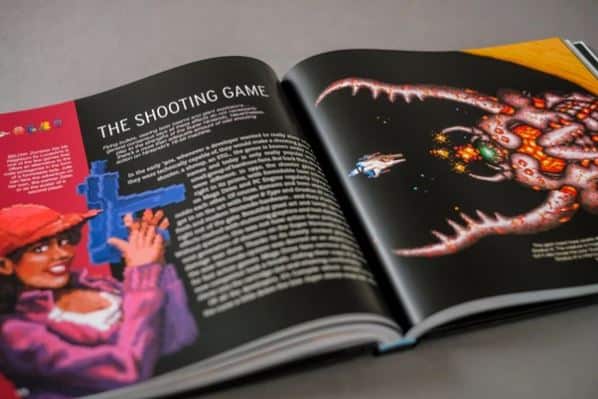 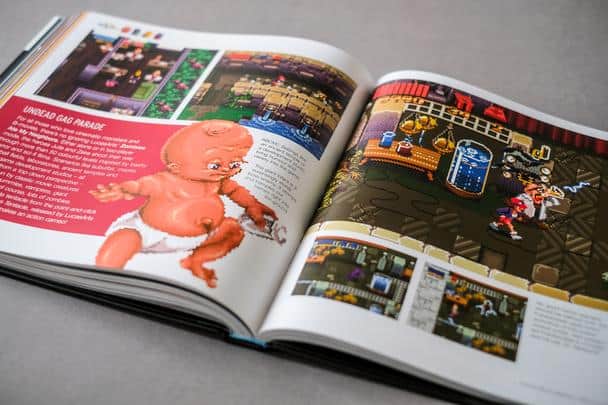 There were some amazing brawlers on the SNES.  I took every opportunity to play Street Fighter II, Mortal Kombat and Killer Instinct at the arcade.  Later, fantastic ports of these titles would grace the Super Nintendo and in turn took over every weekend with fighting tournaments with friends.  These intense competitive games would bring out the best and worst of you…depending on how you were fairing that particular match.  Losing would fire up some serious motivation to learn new characters, combos and special moves.  Of course everyone had their favorite fighters.  My heavy picks were Ryu, Guile and Bison for SFII.  Scorpion, Rayden and Lui Kang were in rotation for MKII.  Orchid, Glacius and Sabrewulf were my assassins in Killer Instinct. 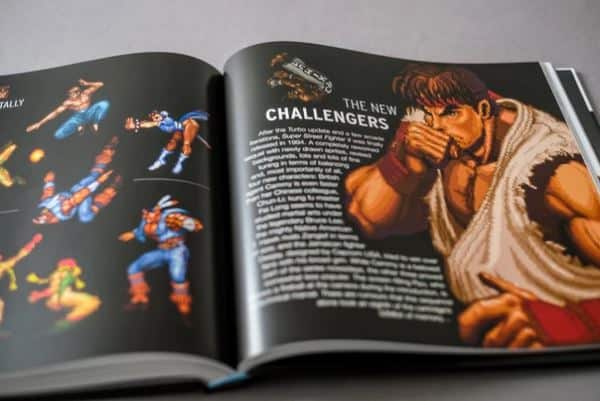 There were a nice variety of fighting games actual campaigns and many featured co-op modes.  Final Fight, Super Double Dragon, Super Punch-Out and Teenage Mutant Ninja Turtles IV: Turtles in Time are but a few of the amazing beat ’em ups to be found on the SNES. 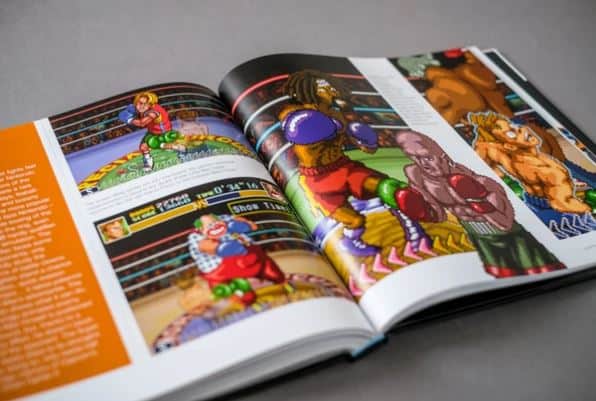 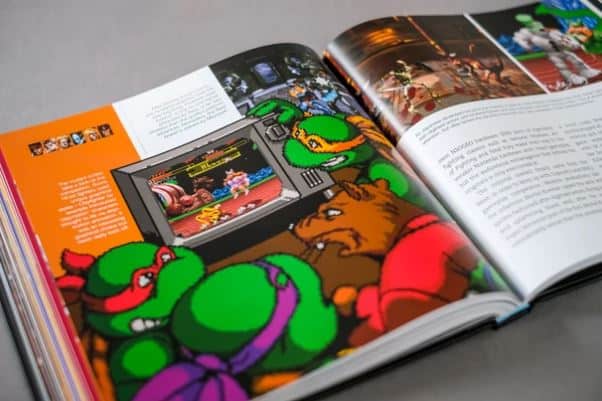 Other Game Genres and Conclusion

What you have seen here is just a mere preview of what the game library looks like on the Super Nintendo.  Who could forget the brilliant racers on it.  One example comes to mind, Super Mario Kart…ever heard of it?  It was also the only place to play one of my favorite racers to date, F-Zero.

There were also simulators, sport titles and puzzle games to mix things up.  Owning this system gives you access to one of the greatest gaming catalogs of the 16-bit era.  The SNES Pixel Book is a visual time capsule of this console.  It tells the story of all the beloved franchises that played vital roles in the Super Nintendo’s monumental success, one pixel at a time. 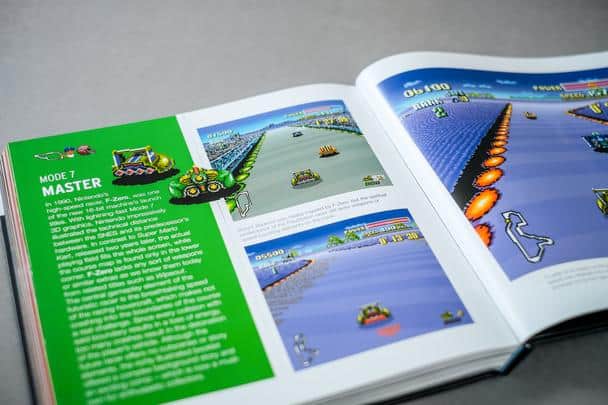