Rocket League exploded once it was released on the gaming scene two years ago and it’s momentum is just as strong today.  I remember watching a Top Gear episode where they engaged in car football.  It looked like a ton of fun and indeed it is.  The team Psyonix have joined up with the developers at Panic Button for this highly anticipated port.  Panic Button is most recently responsible for the excellent Doom port.  These two highly talented teams have once more worked their magic and produced something really special here in Rocket League for the Nintendo Switch.

For those who have yet to play this hybrid sports game, players race around and use their high octane rides to knock a huge soccer ball across the playing field and eventually into their competitors goal.  The idea itself is quite simple, but the wonderful thing is while it is easy to pick up and enjoy, it’s also difficult to master which gives it some serious replay value.  It will take many hours of practice to become a pro behind the wheel and efficiently work the ball down the field and score those game winning goals everyone is after. 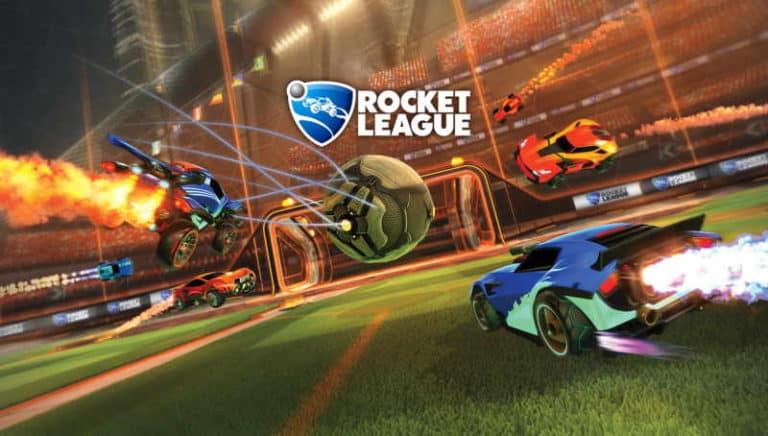 While there had to be some visual sacrifices to get this running at full steam on the Nintendo Switch, Panic Button Studios and Psyonix nailed the implementation of this port, giving it a fantastic balance of solid performance and visual prowess that shines on this portable system.  When players have the console in docked mode, you should see a resolution of 720P, while handheld mode hovers around 526P using a dynamic resolution scaler.  The priority here was to give gamers 60 frames per second no matter how you are playing and this is crucial in a game that requires lightning quick reflexes. 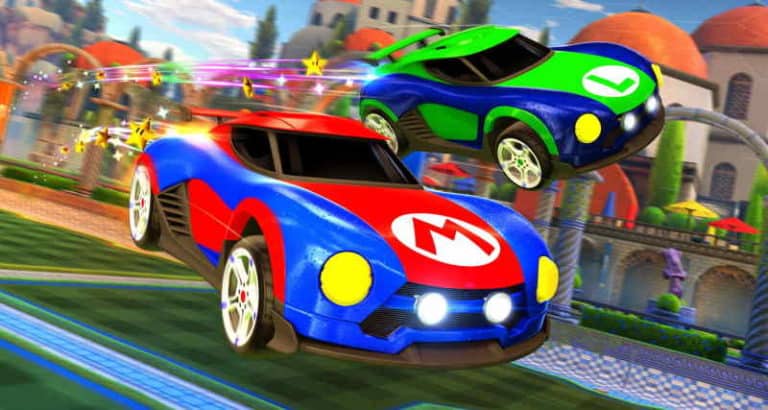 The action in Rocket League is frantic and equally addicting.  Players boost themselves in to the air and off walls at the precise moment to slam the moving ball into the goal.  Pulling this off is incredibly rewarding and it’s what keeps gamers coming back time and time again for another round.  One concern I had was how the online system would perform, given how the Nintendo Switch is currently lacking in this department at the moment.  Thankfully, players can jump into online matches with ease.  Cross-network play is here as well and allows Nintendo players to compete with Xbox One and PC gamers.  Local multiplayer is one of the most exciting features for the Switch version.  Each Joycon is surprisingly efficient at providing great feedback for both players, while the Pro controller offers the absolute best experience.

The Switch version has two exclusive rides, which is a nice bonus from Psyonix.  The first new car is called the NSR and has a both a Mario and Luigi version.  The second unique vehicle has been modeled after Samus’ gunship from Metroid.  Each has their own specific sound effects as well.  These are both free unlockables and are a nice addition to the roster.

Rocket League on the Nintendo Switch could be arguably the definitive version.  The fact that you can take this amazing experience on the go, plus the value of local multiplayer, Cross-Network Play and exclusive rides, makes this an outstanding option for those looking for a fun competitive sports game on Nintendo’s new platform.

Rocket League is a vehicular soccer video game developed and published by Psyonix. The game was first released for Microsoft Windows and PlayStation 4 in July 2015, with ports for Xbox One, macOS, Linux, and Nintendo Switch being released later on.