It’s been 8 years since the original Western took the gaming industry by storm and the sequel once more defines what the current gen consoles are capable of thanks to the wizards that reside at Rockstar Games.  Welcome to Red Dead Redemption 2. 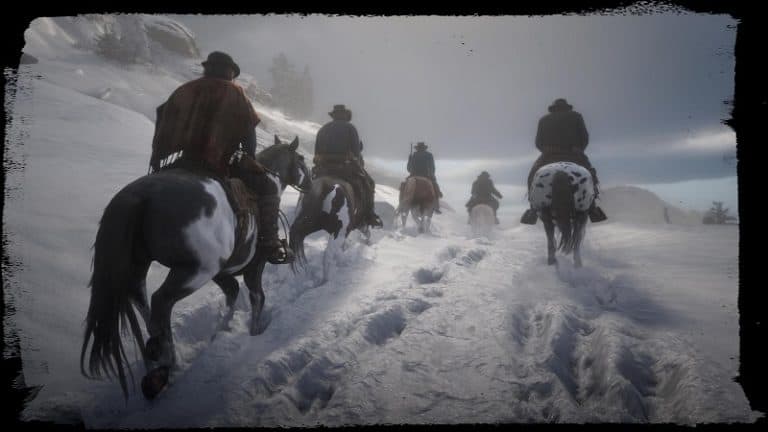 The world envisioned and brought to life here is without a doubt the most impressive open world environments to date.  The time period is 1889 and the life of an outlaw is slowly beginning to fade due to laws being enforced across the states.  Dutch and his band of misfits have exited Blackwater due to a heist gone wrong that took several lives from their crew.  Their way of life may be in danger, but this particular gang of cowboys are not going to go quietly into the sunset.

The game starts off with a nasty blizzard that is upon them, showcasing some incredible weather effects.  How the horses and people plow through the snow as it falls and shifts with every step is just phenomenal.  Compare it to what Rare did with water in Sea of Thieves, this is what Rockstar has done with snow in Red Dead Redemption 2.  It certainly is something you must see for yourself to appreciate.  There is an altercation with wolves that left me breathless.  They kicked up the snow as they surrounded my horse and the blood splatter from my connecting shots with the rifle sprayed the nearby white landscape in a eerily realistic manner.  Their muzzles stained in bright crimson red made it a thrilling encounter.  It was but the beginning of the incredible attention to detail that is found throughout Red Dead Redemption 2 and the lush landscapes, lighting and unmatched graphical presentation accomplished on the Xbox One X.

I felt like I was playing within a Quentin Tarantino movie

As you try to find shelter from the horrendous storm,  it also serves as a nice introduction to all the characters in Dutch’s gang that is made up of both men and women.  Gamers will take the role of Arthur, who was practically raised by Dutch and has now been with him for twenty some odd years.

The first chapter is truly cinematic and expertly implemented.  I felt like I was playing within a Quentin Tarantino movie, which at least coming from me is a huge compliment.  The musical score, action and fantastic characters pulled me in immediately to the plot at hand.  I knew after completing this first chapter that this game was going to consume all my free time for the foreseeable future.  Expect to put in at least 60-70 hours to finish up the campaign.  If you actively participate in the large selection of side quests found throughout the huge map, you will no doubt be looking at 100 hours. 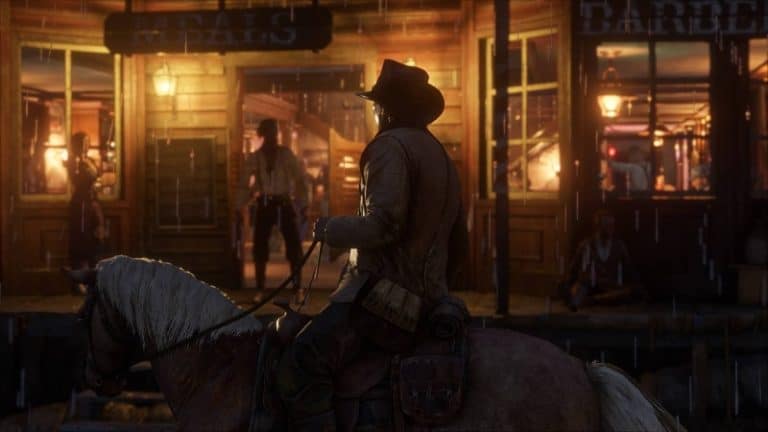 I have never seen such a large variety of missions that are all equally polished in content and story.  There is no feeling of grind or repetition here.  That in itself with a game of this size and scope is a massive feat.  Each objective proves to be thrilling in its own right, as you never know exactly what to expect and are often forced to decide which direction to take.  For example, should you let someone go and risk them being a threat in the future, or finish them where they stand and risk the eventual bounty that will be on your head from this decision?  These moral dilemmas raise the risk for each mission and really keep you engaged on the story, the action and consequences.

Story Telling at its Finest

Rockstar must have spent an enormous time and budget on the story line, as the voice overs for every interaction is unique and makes the world around you that much more real than any open world before it.  There have been other massive open world ventures, but none that feel this natural and real in how all the NPC’s interact with you.  Each personality is distinctive and seems genuine, whether it be a friendly stranger passing by you as you enter town, or a hostile drunk that is trying their best to instigate trouble. 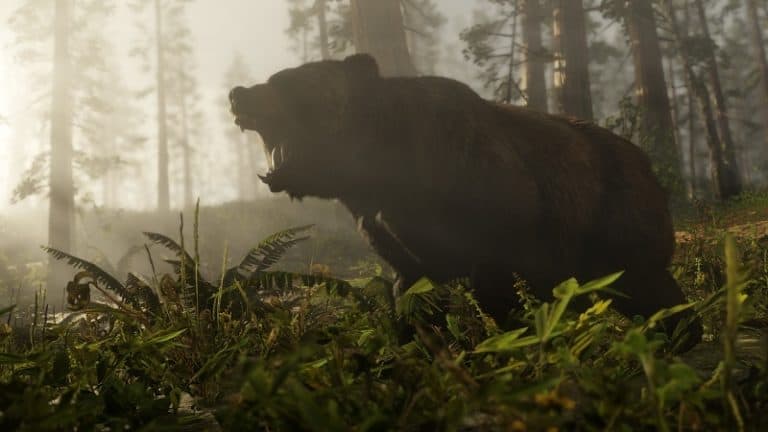 The action in Red Dead Redemption 2 is very satisfying, thanks to again fine details and realistic gameplay.  As you jump off your horse, you’ll need to grab the weapons you wish to take into battle.  Whether this be your bow for stealth or your rifle for range and damage, you have to remember to equip them before battle.   Let’s just say I learned this the hard way.  I like how you can see every weapon on Arthur.   He’s either carrying a weapon in each hand or its holstered or hanging from his shoulder.  Again, it’s all these little details that quickly add up to make the game so special.

The weapon wheel makes this a breeze once you learn the mechanics behind it.  Each gun is replicated wonderfully here.  The tension builds as you close in on your enemies.  You have to reload or switch weapons in swift order to get the final shot.  The animations and sounds of each firearm are spot on and sound brilliant.  You’ll be scrolling throw a wheel to equip tonics and items found or bought to restore your stamina, health and dead eye cores.  Keep in mind you’ll have to do the same for your horse too.  Take good care of your trusty stallion to ensure they are healthy, well fed and clean.  Your horse can certainly be your lifeline at times in the game, so keep a watchful eye on their stats.

One of my favorite parts of the game is keeping the camps well fed and going after big game.  I faced off against a 1,000 pound grizzly that was every bit as mean as he looked.  The beast was on me after getting off just a couple shots, forcing me to break out my knife and fight for my life.  It was a terrifying ordeal due to how realistic the game looks thanks to the native 4K resolution and HDR treatment in full glory on the Xbox One X.

Arthur learns to track animals using “Eagle Eye” that is activated by pressing in both analog sticks.  It gives you a glimpse into the direction they headed and clues if any are left behind.  Be careful though as you may find yourself face to face with what you are hunting before expected.  If you don’t have your rifle, shotgun or bow ready, it could prove to be your demise.

Once you successfully track and kill your prey, you can then skin it and place the carcass on the back of your horse to take back to camp for a good  meal.  There is a box here where you can donate a percentage of your earnings and items collected to keep your camp in good shape and the morale of your gang high.  Between the main story and plethora of side objectives, this is a content rich game in the highest of quality.  The land around you begs to be explored and you just never know what adventure awaits you in the wild.

A rare and wonderful Gem that happens once in a Generation 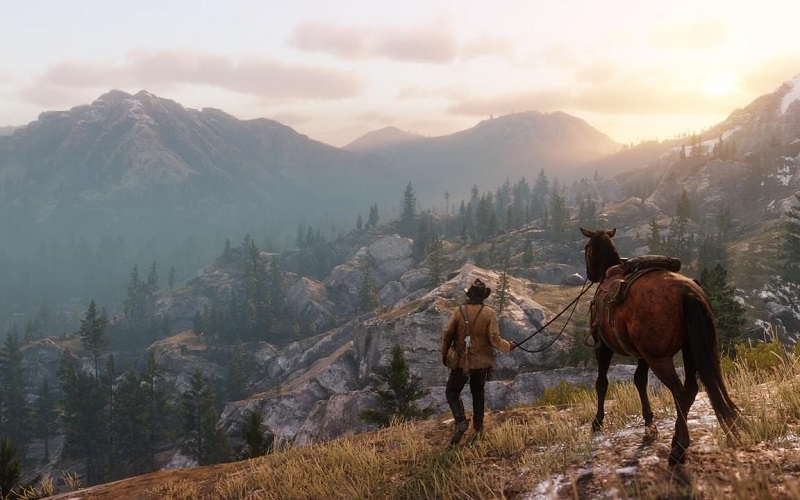 Red Dead Redemption 2 accomplishes something that few games do…perfection.  It’s wildly apparent that the long wait and hype behind this sequel was worth it and warranted.  You’ll find a campaign that is immensely polished, detailed and presented in a manner that keeps your eyes glued to the screen and jaw dropped more often than not.  It’s an experience not to be missed and thankfully delivers this gaming bliss across all platforms, regardless of whether you have the Xbox One X or PS4 Pro.   The Game of the Year is official.

Red Dead Redemption 2 is an epic tale of life in America's unforgiving heartland. The game's vast and atmospheric world will also provide the foundation for an online multiplayer experience.