Back in the 16-bit days, I played a lot of Mutant League Football on the Sega Genesis.  I’ve never been a huge fanatic of sports games, but MLF mixed this genre up, making it very entertaining and easy to pick up and play.  It provided a ton of laughs for my friends and I.  The game was based in a post apocalyptic world where radiation caused the human race to mutate into the ghastly ghouls seen on the playing field.  As one might imagine, I was thrilled to hear that Digital Dreams Entertainment was bringing this killer franchise back for the fans on the PC, Xbox One and PS4 this year.

Mutant Football League brings back all the carnage and magic from the original.  Mutants, skeletons and robots take to the field to wage war and get the win at any cost.  The action is fast, brutal, and once again incredibly entertaining.  For those that may have not played this series, it’s arcade in style similar to NFL Blitz.  This time around there is a bit more strategy available in your offensive and defensive options.  There are multiple modes to play around with that include Exhibition, Practice, Playoffs and Full Season.

The game currently has 18 teams to choose from, all of which that are cleverly renamed (as are the players).  I’m from SC, so I chose to play primarily as the Scarolina Panzers.  I had an opening to run for a touchdown and didn’t pay attention to a mine set near the goal line.  This resulted in my quarterback, Wham Neuton, being blown to bits.  Be prepared to lose players in violent fashion…a  lot. 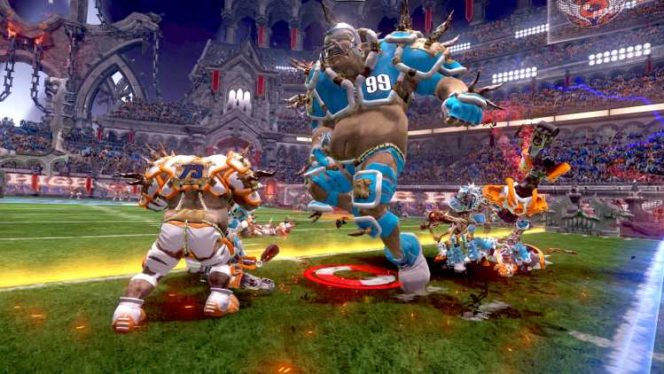 If you have never played the original, you are in for a treat.  This game offers up loads of mayhem and chaos that makes each and every play highly entertaining.  Not only do you have to deal with getting slammed, kicked and pummeled; but there are also environmental hazards across the 18 playing fields that feature buzz saws, land mines, fire pits and lightning to amp up the action even further.  Hitting any of these will end in a gory death. Players have to be aware of these obstacles to avoid losing too many players, which could ultimately end the game with your team forfeiting. 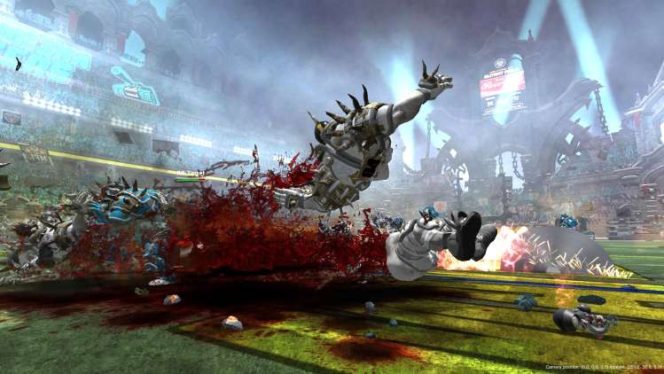 There are some sinister shenanigans gamers can pull on one another in MFL.  You can bribe the ref to get bogus calls against your opponent for example.  If you don’t agree with the ref, you can even run a play to take them out of the picture.  It’s possible to equip shotguns and chainsaws too at times to settle the score. There isn’t much that is off limits here, and it’s this wild gameplay that makes MFL such a riot to play. 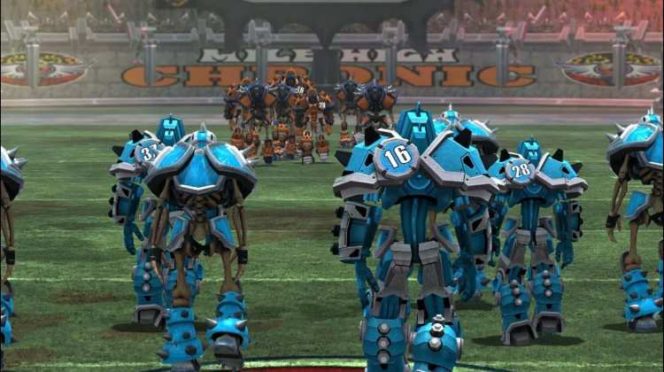 Tim Kitzrow provides all the puns and comedic commentary during each game. The jokes are adult rated, so be sure to keep that in mind if you have any kiddos around wanting to watch some football. The dialog is pretty hilarious, and I believe it fits well within MFL, but it can be turned off within the game’s settings if you wish.

Mutant Football League has taken ages to get here, but luckily it delivers everything that made the original so much fun. The crazy over the top action found in the first game from the 90s is present here and looks fantastic. With the added addition of online play, this should be an instant hit with fans and for any gamer that enjoys the arcade style gameplay over simulation. I highly recommend this title and can’t stress enough how fun it is. At $19.99, it’s a steal and one of the most enjoyable sport games I’ve played in years.

Mutant Football League is an American football video game. It is a spiritual successor to Electronic Arts Mutant League Football. The game was released on Microsoft Windows on October 31, 2017, released for PlayStation 4 and Xbox One on January 19, 2018, and on Nintendo Switch on October 30, 2018.