Retro gaming is more popular than ever with gamers seeing remakes of iconic classics and brand new 2D based releases from many developers.  They often feature the old school, pixelated art style from the 8 and 16-bit era.  Mega Cat Studios are not only developers of some great retro infused software, but they also produce these games for the Nintendo Entertainment System and Sega Genesis.  On top of that, they manufacture their very own cartridges alongside a nice manual and product box.  It’s a total time warp to picking up a game back in the era of these amazing game systems from the late 80’s and early 90’s. 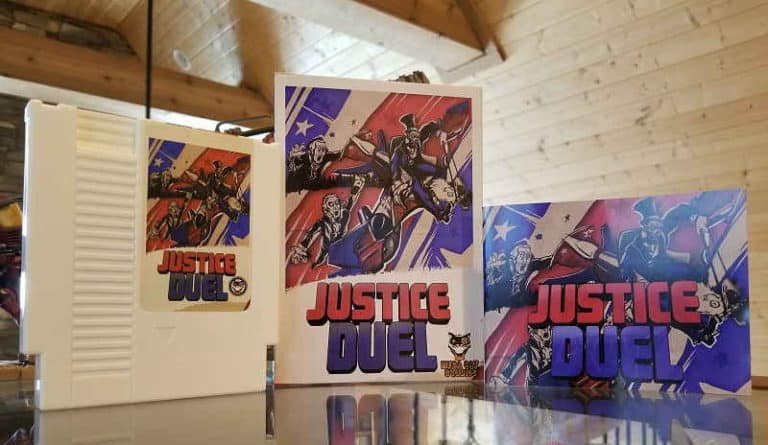 Today we are looking at Justice Duel for the NES.  This is post World War III and Gamers play as one of four historical patriots that have been brought back to life through science and technology and includes: General Grant, General Lee, Abraham Lincoln, General Roosevelt.  It’s time for justice as players face off against one another while riding atop giant mechanized eagles.  The B button controls how high you will fly, while the A button shoots projectiles towards your opponents.  Within each level, there are also bear traps, firecrackers, axes and explosive eggs that add to the action on the screen.  Hearts will regain health, while the Stars and Bars power-up will make your player invincible.

In single player mode, you’ll fight against waves of enemies and once cleared, you’ll advance to the next stage.  The controls are great and allow it to be picked up and enjoyed immediately without any pesky tutorials.  Players shoot, jump, fly and can pass from one side of the screen to the other, presenting some fun cat and mouse like gameplay scenarios.  The sprites are vivid and bursting with color in each of the four arenas.  Gamers will battle at the Capital Building, Forest of Souls, USS Emancipation and the Warrior’s Grave.  The soundtrack is excellent as well, dishing out some seriously good retro game tunes that is tough to beat. 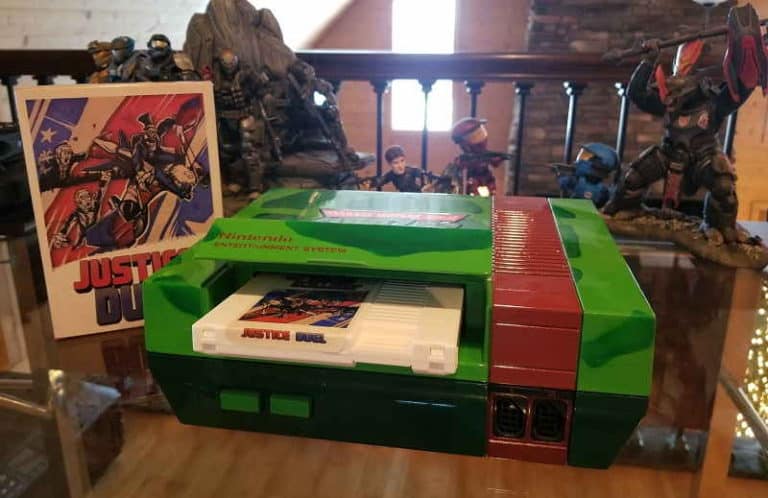 The real fun in Justice Duel presents itself when playing against friends and family.  My wife and I played several times.  We both won some games and found it to be really entertaining and addictive since we are both highly competitive.  There was lots of gloating and trash talk going on during each match.  The game supports up to 4 players with the NES Four Score adapter and there is also an achievement system for completionists.  For example, killing 75 red ghost enemies will get you the “Seeing Red” achievement.  Mega Cat Studios even offers a bundle that includes the game and a custom Justice Duel art cover for the 4 player NES adapter. 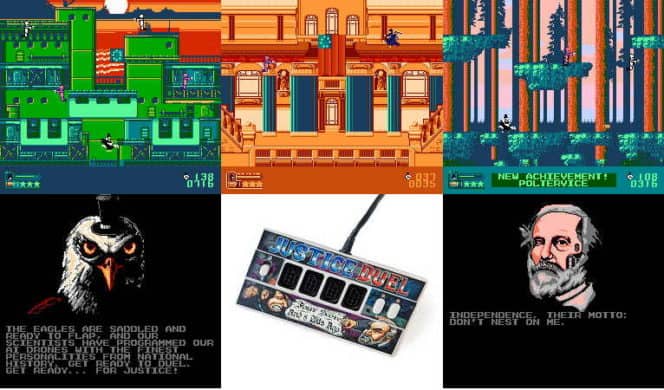 Justice Duel offers something really special for those that grew up during the NES era and for anyone that just simply enjoys retro gaming.  This should also be a no-brainer for collectors.  Mega Cat Studios work is really impressive and their team is seriously passionate about creating new gaming experiences on your iconic NES and Sega Genesis systems.

Take to the skies on the back of scientifically-engineered eagles and joust against AI patriots from America’s past. Dodge fireworks, bear traps, and dead presidents. The history might be wrong, but the justice is so right.