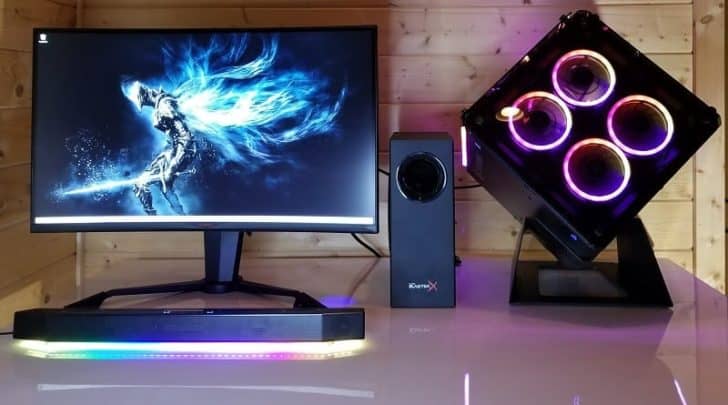 While soundbars have grown extensively more popular, there has been one market few have targeted.  This would be the PC gaming audience.  Yes, there are plenty of 2.1 and 5.1 options available; but the Sound BlasterX Katana Audio System by Creative is one that has been developed with a vastly different approach.  Their vision was to produce the world’s first true under-monitor soundbar solution for the PC.

Creative obviously wasn’t playing around during the development for the Sound BlasterX Katana.  The sheer build quality, unique design and technology housed within the soundbar and sub is staggering.  It incorporates a slim profile to easily fit under your favorite gaming monitor, yet packs 4 speakers.  At the top of the soundbar, there are two upward drivers that have been expertly tuned for excellent midrange response.

“The idea to have these 2.5″ speakers fire upward is to deliver a room filling experience where the sounds bounces off all around you for a better surround sound experience.  Guess what, it works.”

The highs are delivered by two 1.3″ inverted tweeters with wide polymer surrounds that perfectly compliment the midrange drivers.  A 5.25″ subwoofer is responsible for all the hard hitting bass notes we all love and adore in games and movies.  The long-throw design, in combination with an excellent ported box enables it to shake the floor beneath you at higher volumes, without even a hint of distortion. 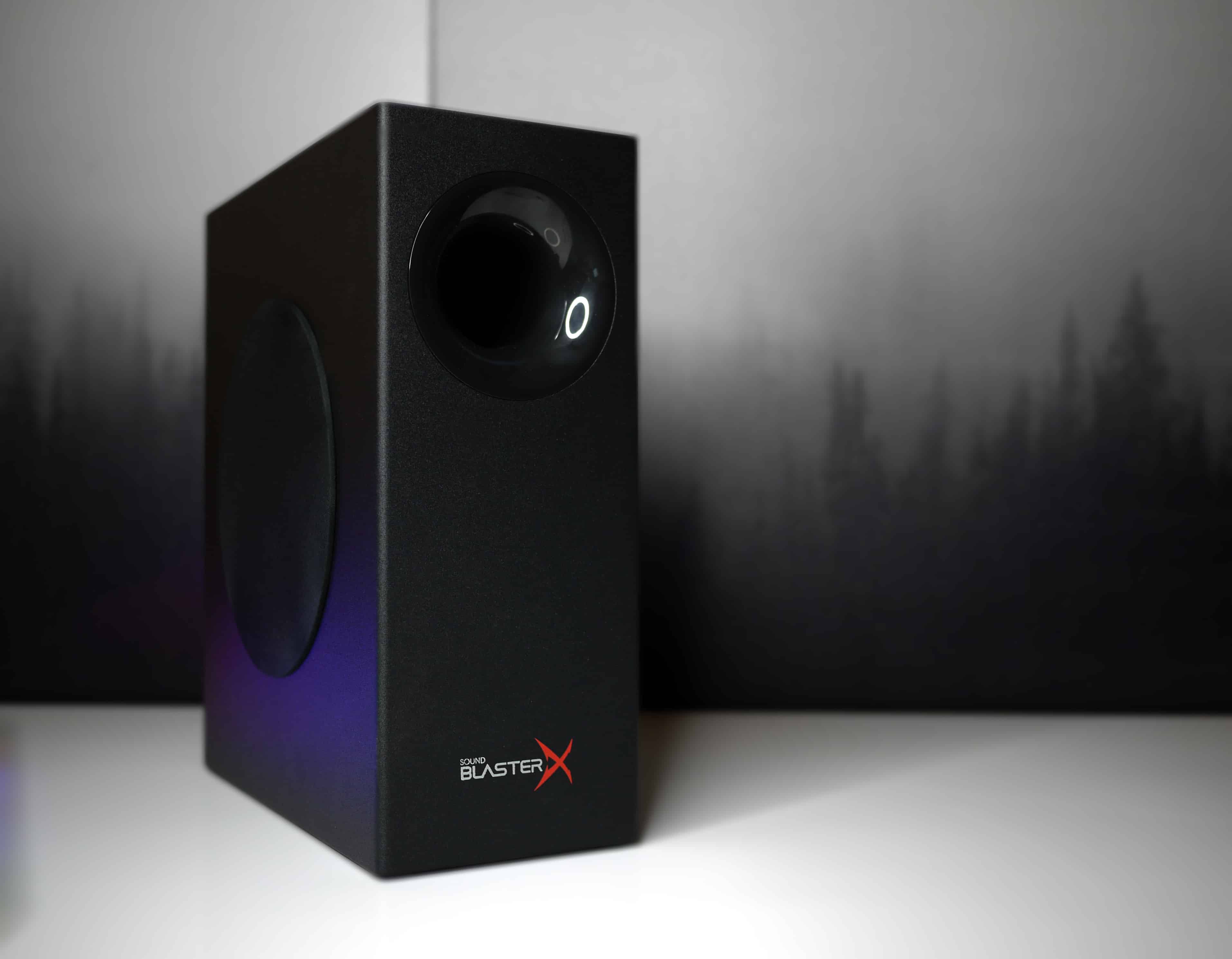 The midrange speakers, tweeters and subwoofer are all powered by Creative’s Tri-Amplified System.  It utilizes their propriety multi-core Digital Sound Processor and features a Dolby Digital decoder.  This means each speaker receives its own dedicated amp, backed by some ingenious design for a truly balanced and seamless audio experience.

It supports virtual 7.1 channel surround that can greatly enhance the immersion factor in movies or your awareness of enemy locations.  Doom was incredibly terrifying when played with this system.  The screams erupting from each demon and their constant ambushes were inherently more jarring while playing through the Katana.  It made our entire team here anticipate the upcoming new chapter Eternal that much more. 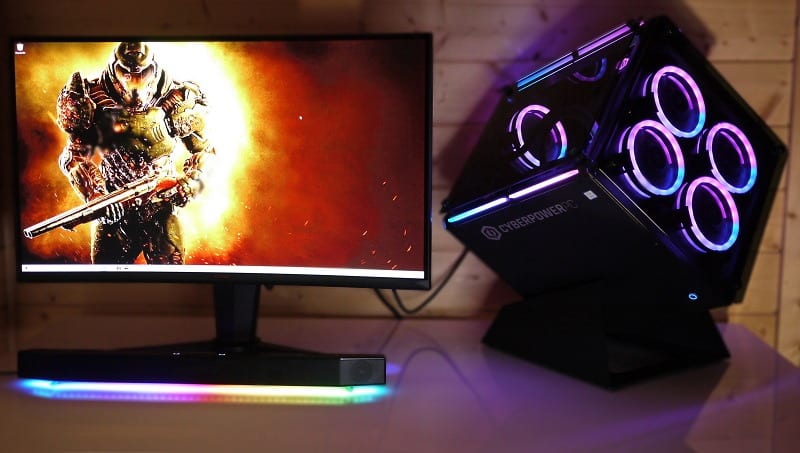 Apex Legends is another great game to test the system on and it didn’t let us down.  It did a solid job at identifying approaching enemies.  We also fired up the latest hit from Microsoft in Gears 5, for its insanely chaotic campaign.  The explosions and chaos shook the room, letting you know the Katana sound system means business; and mind you this was barely at 50% volume.  You can actually choose from 4 audio presets that have been professionally tuned for specific audio experiences.  These include: Game, Concert, Cinema and Night. 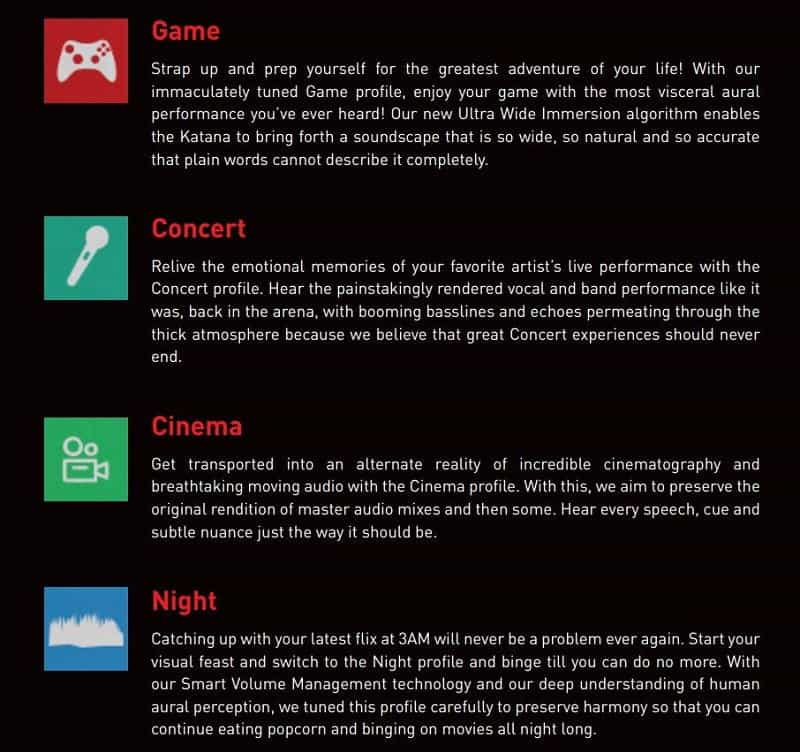 The Sound BlasterX Katana Audio System looks just as good as it sounds.  It’s brushed aluminum finish looks fantastic and certainly entails this is a premium model from Creative.  Controls are found up top and dead center, comprised of 5 buttons that include: Power, Volume (up and down), Source and Audio/Lighting. 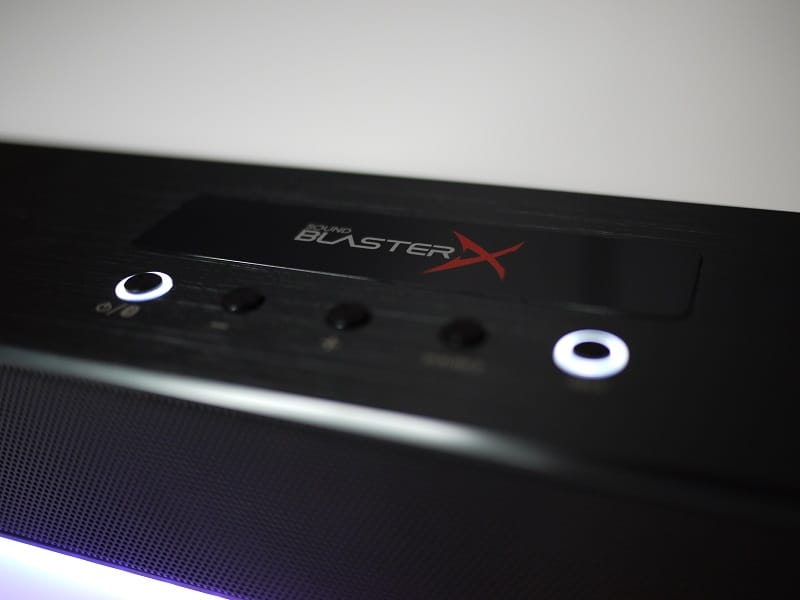 On the back, there are several inputs that include: Headset Jack, Mic in Jack, Subwoofer Out Jack, Power Supply input, Line In Jack, Optical Jack, USB Flash Drive Port and a USB connection port for your PC.  If you prefer, there is an included remote control where you can adjust and access all of these presets. 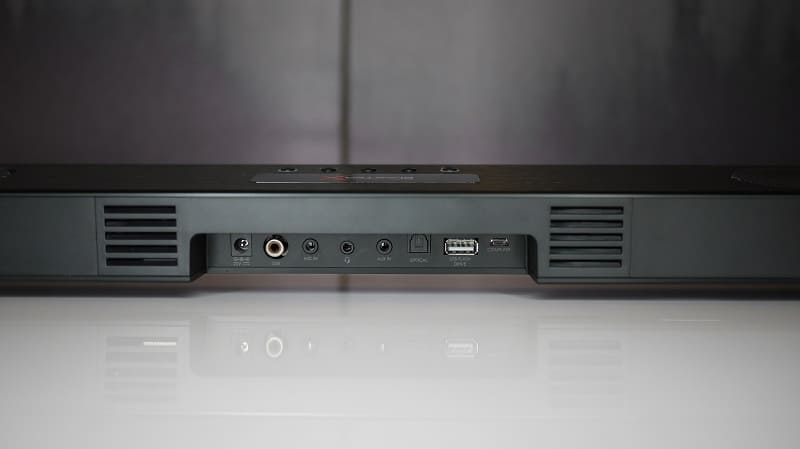 Second to the amazing sound, is the Aurora Reactive Lighting System.  It creates a one of a kind light show through its 49 RGB LEDs that are located across the entire bottom of the soundbar.  It comes with 6 unique presets preloaded.  You can also create your very own effects and rhythms that can be assigned to new custom profiles.  It’s capable of displaying up to 16.8 million colors…simply astounding. 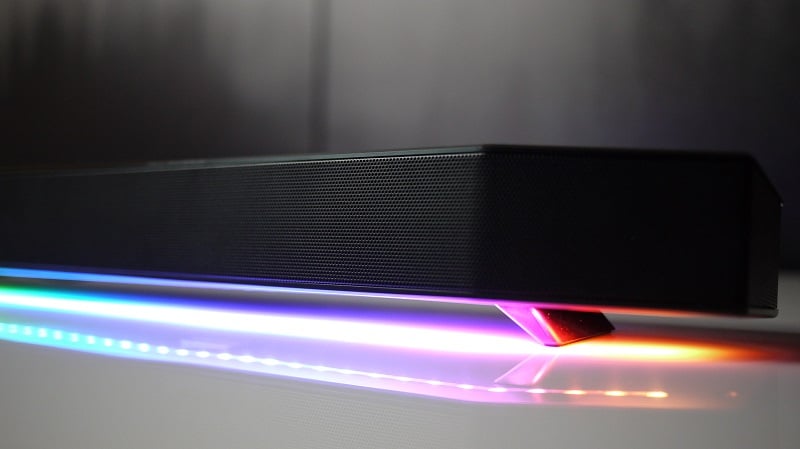 We aren’t done yet though.  Creative also included Sound Blaster Connect for the PC that allows gamers to customize their audio, voice, lighting and EQ settings in a very clean and intuitive interface.  This suite from Creative also includes profiles for many games.  This is really useful, as you can simply select that profile, launch the game and know the audio settings have already been dialed in to perfection. 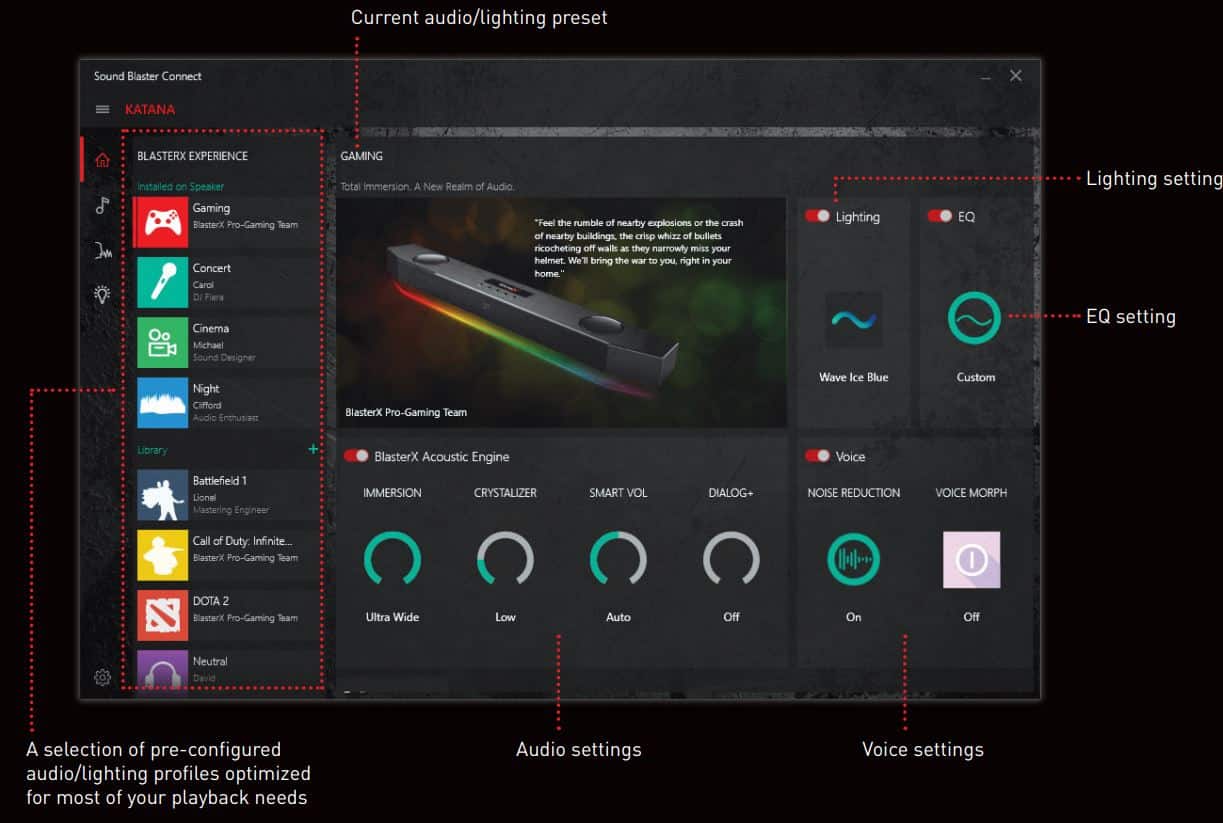 There are so many things to adjust and edit from the Sound Blaster Connect.  You can enhance your surround sound performance with the immersion setting or heighten the quality of your music tracks by boosting the crystalizer dial.  There is even Voice Morph technology, where players mask their voice to one of many options during gampelay or recordings that include an Orc, Elf, Brute or Alien to name just a few. 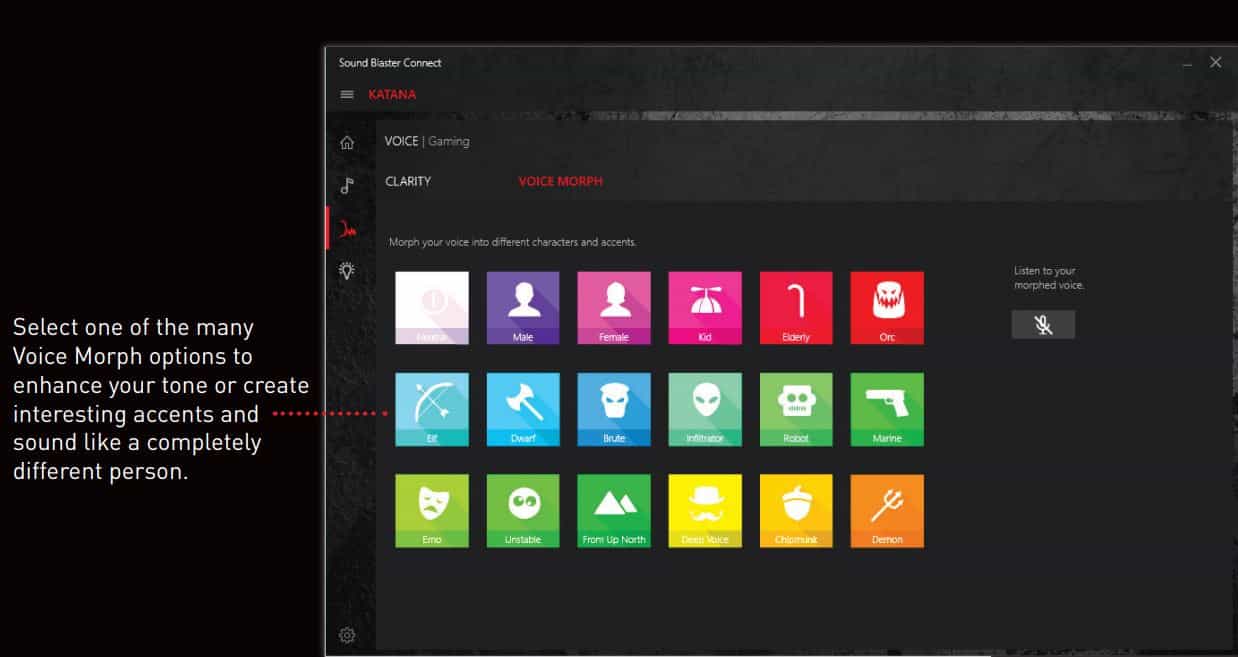 Creative set out to develop something extraordinary with their Katana audio system.  Their vision was a robust soundbar, specifically designed to fit comfortably under any gaming monitor, while delivering elite performance.  It’s packed to the brim with technology including upward firing drivers, high excursion tweeters, long-throw subwoofer and Aurora Reactive Lighting LEDs.  The Sound BlasterX Katana is a sleek and powerful all-in-one audio package for PC gamers that looks just as impressive as it sounds.

Named after the sword so technologically perfect in structure and so demanding in its creation, the Sound BlasterX Katana exhibits the same sleek sophistication and formidable strength in its design and audio prowess. In a league of its own, the Katana fits right under your monitor with a slimness that's unmatched by other so-called gaming “sound bars”, and is powered and enhanced by our award winning multi-core audio DSP making it the world's first true Under Monitor Audio System (UMAS). In addition, the Sound BlasterX features the Aurora Reactive lighting system, a series of 49 programmable LED lights lined from edge to edge of the Katana chassis, making it the perfect addition to fully optimize and customize your PC and desktop setup.