Attack on Titan 2 follows the incredible story of mankind’s efforts to not only survive, but wage war against the terrifying beasts that are determined to wipe out the entire human race from existence. For those who may be new to the franchise, the game is set in a world where the last remaining cities are surrounded by giant walls for protection from enormous monstrous creatures that are purely driven by an insatiable appetite for humans. Attack on Titan 2 dives deep into the first two seasons of the show and highlights Eren Yeager’s journey, alongside his childhood friends Mikasa and Armin. Koei Tecmo worked closely with the manga’s publisher Kodansha, and writer Hajime Isayama to create new elements into the story for this sequel. 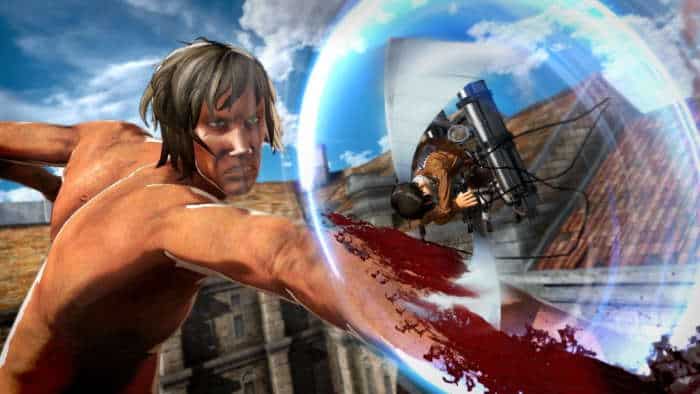 Graphically the game is pretty impressive and does a great job at implementing the look and feel of Attack on Titan’s world. The frame rate does occasionally stutter on the Switch when there is a ton of action taking place on the screen, but for the majority of the game it performs well. The cut scenes and music score are absolutely fantastic.

There are multiple modes available that include Story, Another Mode and Annihilation. Gamers start the main game by creating their own Scout and begin training immediately in hopes of serving in one of three military branches. They are in place to enforce the law and provide protection within and outside the city walls. In order to stand a chance against such towering foes, the Scout Regiment is equipped with Omni-Directional Mobility Gear. As the name implies, this allows players to be highly versatile when facing off against Titans in combat. There is actually a lot to learn in using this gear effectively. It allows players to launch into the air at high speeds and cover great distances very rapidly. 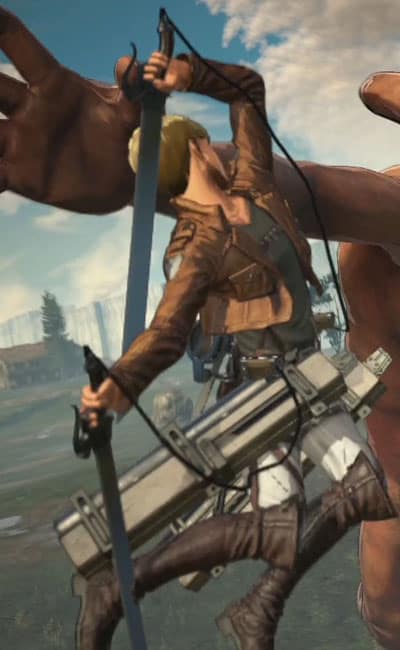 Pressing the Y button fires off your hook launchers to any nearby walls or trees, while hitting the B button gives players an extra boost forward. The X button shoots off the ODM anchors into the Titans, which is the first step into taking these beasts down. The R button toggles between attack points. Once anchored in, you’ll quickly fly towards the Titan and now it’s just down to correctly timing your strike, which is done through the X button. To deal extra damage, press B after anchoring in. This gives you extra speed as you jet towards the Titan with your blades made from ultrahard steel. There are some new moves implemented for this outing that include a sneak attack, that allows players to take out Titans from a distance. On the defensive side, a Hook Drive will allow you to pull off an cinematic execution when timed correctly while evading damage in mid-air.

Teamwork is crucial to being victorious on the battlefield. You’ll need to issue commands to your squad as you engage enemies. This is done by holding down the left trigger and using the directional pad to select specific teammates. The AI has been improved upon for this sequel, but nothing beats tackling these monsters alongside a friend for some fantastic cooperative fun.  Another factor that is vital to success are Bases. They bring a new element of strategy in that you have to be clever in where you place them. They can not only replenish your blades and gas tanks, but can also fire artillery at Titans from far away. 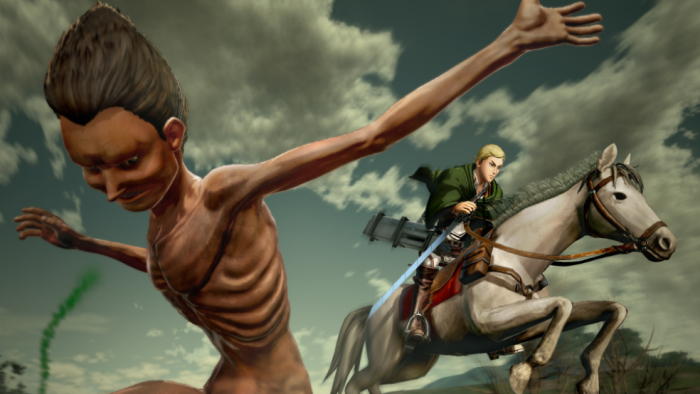 Outside of battling these terrifying humanoids, you’ll be exploring the cities and getting to know the entire cast of Attack on Titan in great detail. The story is comprised of both Season 1 and 2 from the series. You can choose who to interact with, and this in turn raises the friendship rank on that specific character. As you build up your friendships, new abilities will become available as a reward that can be very useful in combat situations.

Attack On Titan 2 is a fantastic venture that takes players deep within a dystopian world where humanity faces extinction. It features fast paced, thrilling action and Koei Tecmo has done an incredible job in capturing the aerial combat and intensity the series is known for. The game’s presentation and content is a real treat for fans, and it delivers one of the best action titles yet on the Nintendo Switch.

Attack on Titan 2, known in PAL regions as A.O.T. 2, is an action hack and slash video game based on Hajime Isayama's manga series of the same name released for Nintendo Switch, PlayStation 4, and PlayStation Vita, Xbox One and PC.