Aces of the Luftwaffe – Squadron is a modern shoot-’em-up developed by HandyGames.  It offers a unique story and implements some interesting gameplay mechanics into the shmup genre.  The campaign revolves around an elite group of German pilots that have been gathered to invade America. 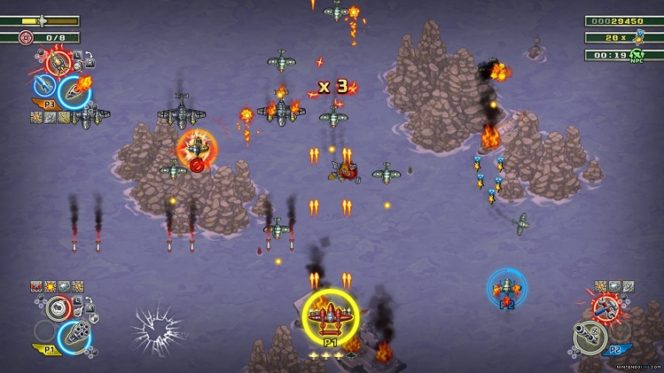 Players control just one pilot, while the other 3 aviators follow in lead.  Each one has their own distinct personality and quirks.  At times, these traits from each pilot brings different gameplay elements into the mix.  One of your comrades will be filled with rage and you literally have to dodge their erratic piloting, while another will get air sickness, which forces your team to move slow until they recover.  This adds another layer of difficulty to each mission.  This new dynamic may not be for everyone, but it’s nice to see the developers trying something new here.

Gamers shoot at enemies with the A button, which also fires artillery from each of the planes in your squadron.  As you move left to right, and forward and back, so will your team.  The controls are excellent and help the game to be accessible to a wide variety of players.  That’s not to say it isn’t challenging, as the difficulty absolutely ramps up as you progress through the 25 stages.  There is even an option for 4 player co-op play.  You and three friends can tackle the skies together and it’s a great addition to the game.  This is definitely a perfect title for couch coop.  Do keep in mind though that each player will require their own controller, whether that be a Joycon or the excellent Pro controller. 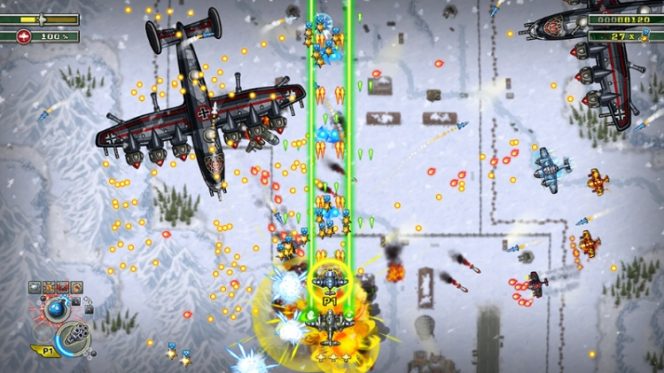 As you progress, you’ll be able to get upgrades that increase your firepower, make your bombs more effective and raise your chances of getting power-up drops after shooting down enemy fighters.  Upgrades are extremely important to evening your odds of survival in future levels, as the difficulty climbs up quite a bit.  It’s never too punishing by any means, but it does offer a nice challenge that will ensure players are on top of their game.  I believe one of the hardest things in the campaign is escorting another plane.  Even when taking out as many enemies as possible, you still have to absorb shots in order to protect them (as they have their own health bar), making it a a feat to complete these objectives. 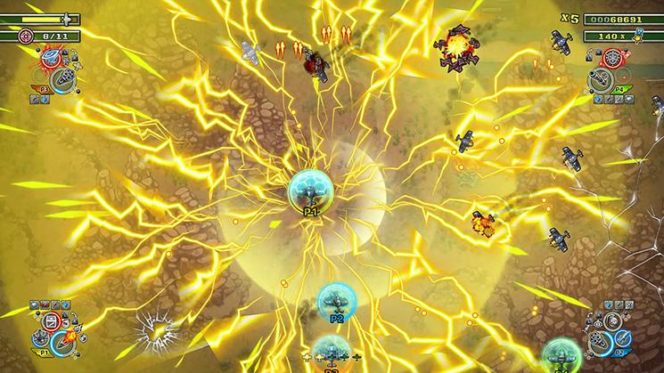 Aces of the Luftwaffe – Squadron offers up some solid shoot-’em-up action.  The ability for 4 player co-op is no doubt one of the game’s greatest strengths.  Graphically the game boasts some nice colorful visuals and runs smooth during even the most hectic battle scenes.  I feel the additional squad elements will be a hit or miss with gamers.  HandyGames has ultimately delivered an engaging shmup that provides an overall enjoyable experience on the Nintendo Switch for fans of the genre.

The Aces of the Luftwaffe have returned! Dodge a hail of bullets and face their fearsome war machines in bombastic air battles and boss fights!