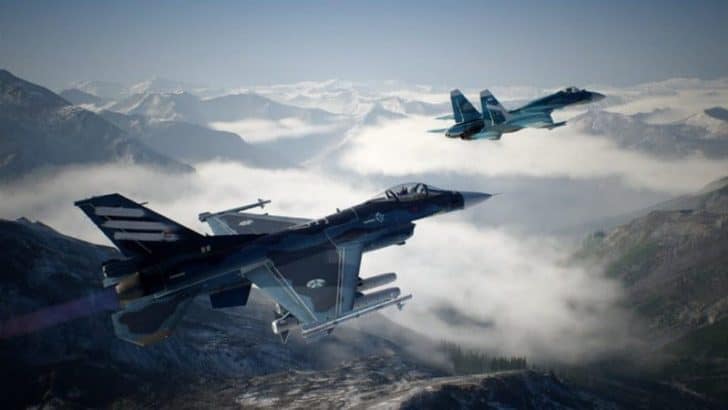 The Ace Combat series from Bandai Namco first hit the scene back in 1995. Since then, over a dozen games have released across multiple consoles, mobile devices and handhelds. They have always been the pinnacle of jet fighter simulators and Ace Combat 7: Skies Unknown keeps this tradition going. As a matter of fact, this might just be the finest combat simulator we have ever played.

The story for Skies Unknown sees a war between Osea and the Kingdom of Erusea. The fighting begins when suspicion and worries grow over exactly how the space elevator would be used by the Osean Federation. If used for vindictive purposes, it could create utter chaos across the land. Players take the role of a Osean Air Defense Pilot named Trigger. An event takes place that charges Trigger of a crime and his punishment sees him sent off to Osea’s penal unit known as Spare Squadron. The single campaign includes over 20 action packed missions that takes place in the Strangereal alternate universe.

Your piloting and dogfighting abilities will be pushed to the absolute max in Ace Combat 7 across two dozen different planes. This is where the game absolutely shines. The controls implemented by Bandai Namco is unmatched here. Prepare to be absolutely blown away dynamic weather effects and the incredible graphical presentation through the use of Unreal Engine 4. Flying into the clouds, rain, sandstorms and through barrages of intense lightning bring a new level of immersion and excitement to this franchise.

The excellent level design that mixes it up from blistering canyon runs to adrenaline pumping aerial fights with highly intelligent drones make it a non-stop thrill ride from start to finish. Once you wrap up the single player campaign, players can test their skills against other pilots in multiplayer. There are two modes that include Team Deathmatch and Battle Royale. Both modes offer plenty of challenge and online fun after the main game is finished.

Ace Combat 7: Skies Unknown raise the bar for what’s possible in a combat simulator. The level of polish found in both the controls and game visuals are simply stunning to behold. Bandai Namco has created the finest entry in this iconic franchise to date and the future for this sim has never looked brighter.

Leveraging the power of the newest generation gaming consoles, ACE COMBAT 7 will blow players away with the evolution of its graphics engine. Beautifully rendered cloud-ﬁlled skies and highly detailed cityscapes enhance the sense of unparalleled speed and set the stage for the most engaging aerial battles in the franchise’s storied 20 year history. ACE COMBAT 7 will provide an arsenal of ultra-modern super weapons and formidable enemies that the series is known for.